Babylon's Fall is one game this year I consider somewhat of a surprise for me in terms of just how much I enjoyed it. This being said, while I also dislike Live Service mechanics and the game's visuals are... questionable, this game has been the butt of the joke since even before it's release even though, in my opinion, it doesn't really deserve to be.

First off, I have to get the big thing out of the way - This is indeed a Live Service (GAAS) Title and as such, it already has a stamp of disapproval on my end. This isn't the place for me to go on a rant over these mechanics, but I will say it doesn't actually affect Babylon's Fall too badly as these are strictly cosmetic. This game uses a currency called "Garaz" and it's mainly used for vanity sets which are just effectly a transmog / glamour over your current armor set, although, later on, this won't matter too much, more on this below. I don't have too big of an issue with the Garaz shop, but what I do take issue with, is the excessive Battle Pass system it has, at time of launch, Season 1's Battle Pass premium line is free, but subsequent ones will be 1,000 Garaz (at time of writing). 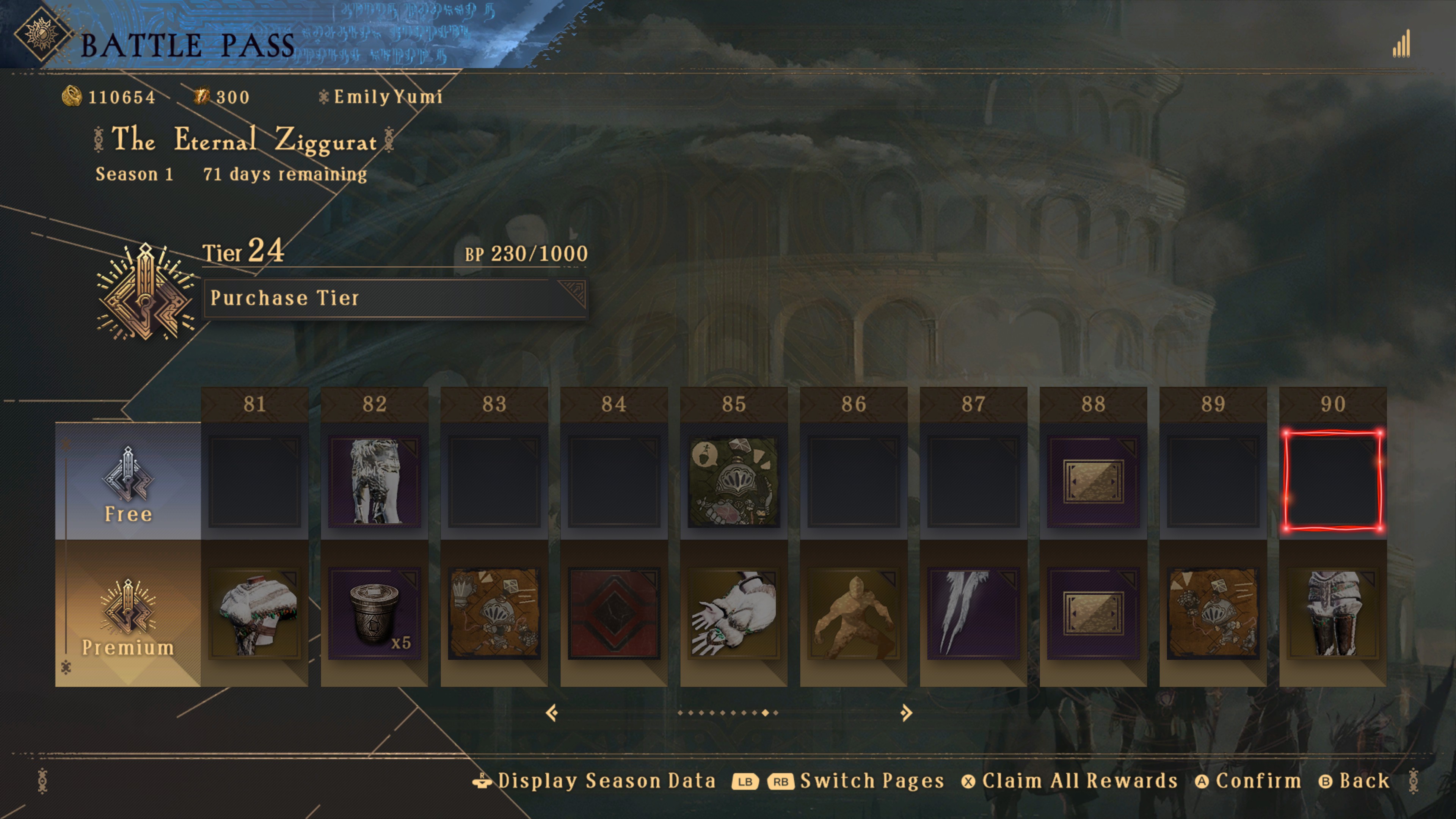 Why do I not like Battle Pass systems? That's a story in itself, Babylon's Fall's pass is a special kind of bad, which we'll get into now: From what's currently in game, Battle Pass are also called "Seasons" which means, for the entirety of the 3 or so months this first one was set up, you have a set amount of days to get through it as far as you're able to. You get Daily, Weekly and Season based extra incentives to keep you logging in. To go up 1 Tier in the Battle Pass ( keep in mind, there are 90 Tiers) you must get 1,000 Points, which you can get by doing the previously mentioned Quests and what the game calls "Orders", which are just extra minor things you can do per quest, such as kill 10 Gallu Archers or earn a number of drops for a certain material, in addition, you can also get points by completing quests... however you get a mere 50 per quest, and this is the crux of the biggest issue I have with this system in particular. If you join late into the game or are unable to play it daily, you miss out on quite a lot and it makes it essentially next to impossible to complete this thing towards the end of it. Yes you can pay to advance in the tier but it is excessively expensive and will very, very easily run you in the hundreds, which to me, is not acceptable in a fully priced game.

With that out of the way, let's talk about the game itself and why I found it to be a surprise in a way. Starting off, this has been an immense point of contention with this title even before release, and that's the game's visuals. When I first played the demo on my PlayStation 5, the game looked extremely blurry and muddy to the point where a direct comparison to a PS3 game would often favor the PS3 game in question. I picked up the game on Steam and was able to play it maxed out in 4K and... it actually looks good? So what exactly is the deal with this game? Well, you can very clearly tell this game's art style was designed with 4K in mind, which is curious as even the PS5 version runs this at seemingly 1440p or slightly below - it has this neat little oil and canvas like filters and a pretty sleek looking filter that turns the game's visuals into oil painting the further away it is from proximity, which in the later areas, actually looks pretty good. So why exactly is the game getting heavily panned over the visuals? Well, to put it simply, 4K is not something that's very readily attainable by most folks yet and even current gen consoles are not running the game at 4K were the art style actually shines. 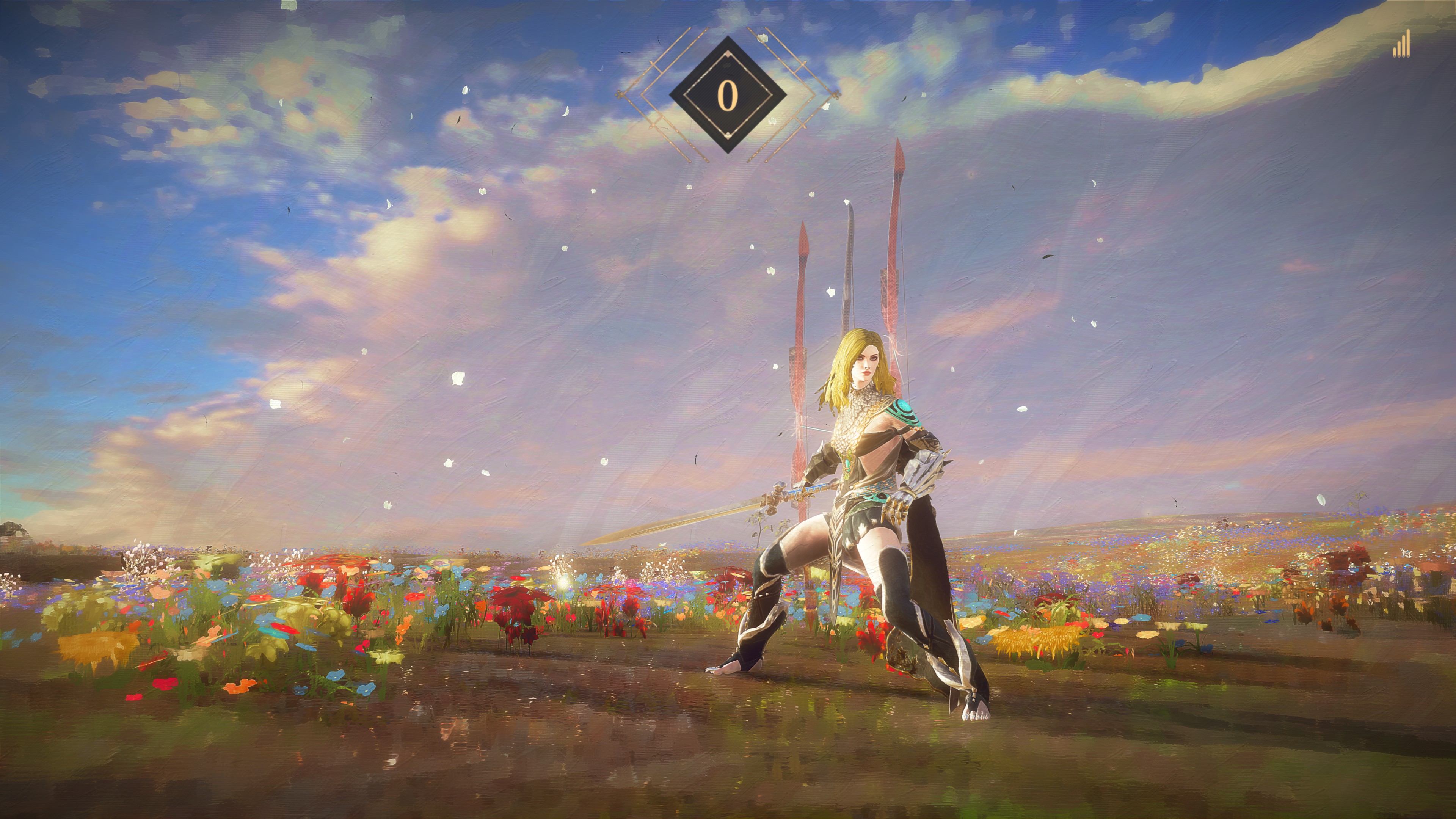 Outside the Style itself though, presentation is overall, kinda lacking. Textures are still relatively low quality as an overall and you can tell the Art Style and Filters were used to heavily obscure this fact. Environments are very samey, and the heads up display the game opted for looks like it would be right at home as a Mobile game. Character models look OK for the most part although, NPCs in cutscenes look pretty dang bad, and the HUB were you mostly reside in looks pretty OK as well.

Now, one of his game's absolute biggest surprises - is the Soundtrack. Most songs are a little muted and generic, namely the Stage music and the main hub pretty much doesn't even get a noticeable song until after you clear the game - however, the songs they opted for in Boss Fights are absolutely great and fits the aesthetic this game seemed to be going for. Here's one of my favorite early tracks: Zenon. Outside the OST though, the game's overall SFX and Voice acting falls on the OK side, I noticed they re-used quite a lot of NieR: Automata sound effects for this game. Voice acting is pretty hit and miss among the cast, I love hearing Ishum talk, but most of the cast sound very one note and dull.

All that sound iffy so far? (Pun possibly intended) Let's talk about the actual gameplay now. To start, the game makes you choose between 3 different classes, but your choice doesn't matter until much later on when you get certain skills that have some degree of variety, but doesn't very much alter gameplay. After the seemingly meaningless Class System decision and once you get in game, you have a degree of varying weapon types to choose from, these being: Swords, Hammers, Rods, Bows and Shields with Bows having 3 separate types (Piercing, Rapid and Scatter) and Rods being tied to Elements such as Fire, Lightning, Frost. You can then assign these weapons to 4 attack slots, your 2 main buttons, Light and Heavy and 2 additional ones that are called "Spectral" weapons. With these, you have a decent degree of variety when it comes to what's most fun for you, despite the balance being a little skewed at the time of writing to Bows. Some weapons also allow you to hold down the button and charge them up for relatively big damage. 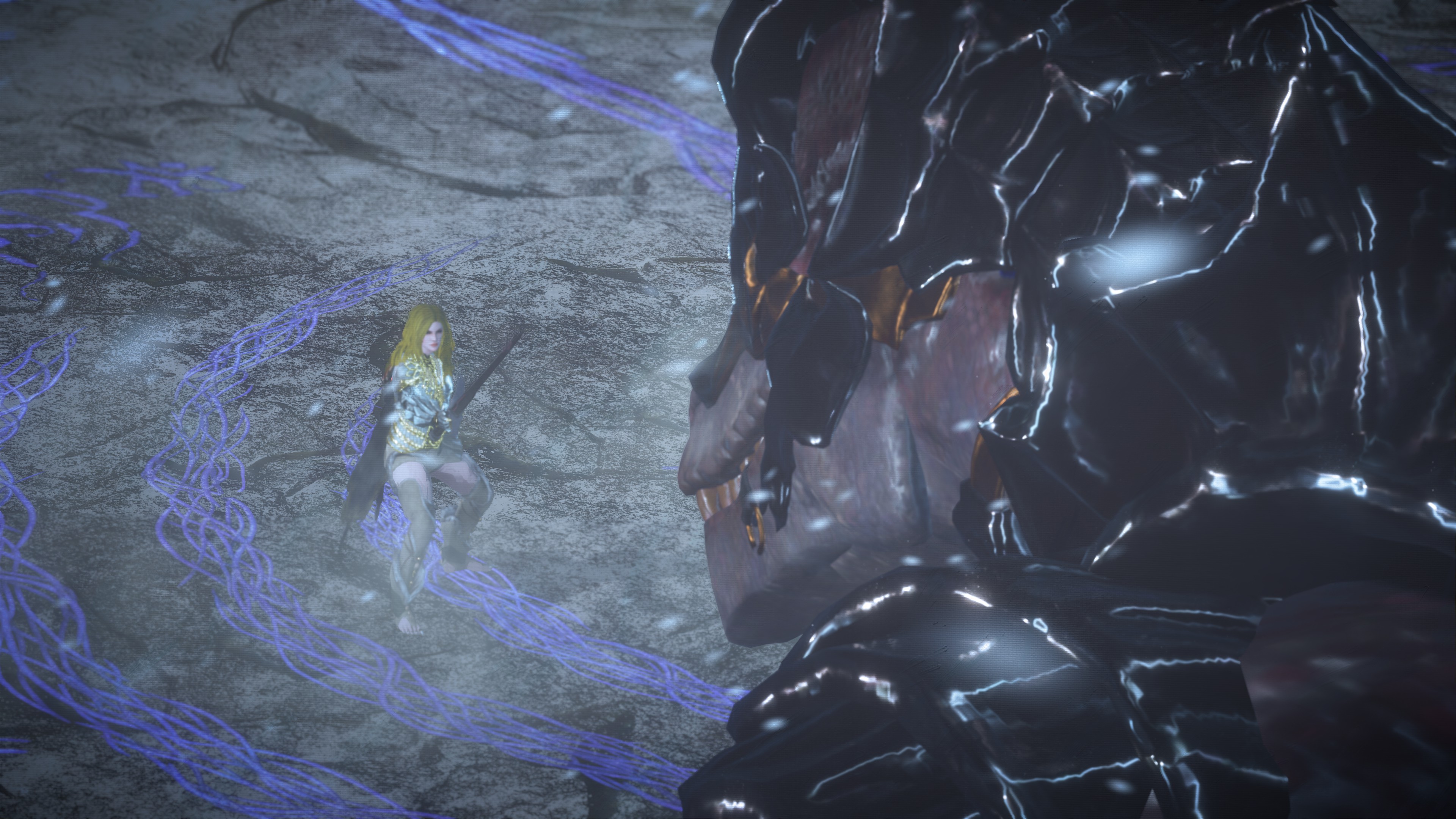 At the start of the game, enemies will feel like damage sponges, and for the most part, they are - until you are enlightened to the existence of charged Piercing/Rapid Bows as spectral weapons. The game does have it's own set of stats for each weapon and armor piece you get as loot, but none of these matter as much as overall Power. This brings me to the game's structure - it functions similar to how it does in a Monster Hunter title. You have a HUB world where you have the ability to alter your appearance, craft and other stuff at the Forge, a Shop that houses both the Premium Currency and in-game currency called Conches and of course, is where you progress through the story and take on Quests. Quests themselves are usually just a linear path to the end littered with enemies and other goodies like treasure chests that contain either Relics (Loot drops) or Materials for crafting or crystals that drop conches that are tallied up at the end. It has a very... Vindictus feel to it where you go through waves of enemies and you fight a mini boss at the end. You get ranked at the end of every combat encounter with a tally at the end, getting Pure Platinum, or the best rank, will usually give you an extra incentive. At the end of each "Cloister", which is what this game calls it's biomes, you fight a major Boss Fight and these for me, were the real highlight of the game. Combat can be summed as a slightly stiffer Nier game in an MMO-esque game structure and it surprisingly made for a pretty fun gameplay loop! I wish the game had more of what actually makes it great, and these are the boss battles, as it stands, you have a total of 6 or so, with one of them being re-used as an extra on another.

Now let's get into the Crafting and all you can do with the Forge system. Once unlocked, the Forge has a number of different things you can do with it, to varying degrees of usefulness. First is Crafting Armor or Weapons, which require Blueprints. Uncommon (Blue) can be purchased from the Shop, but the Rare ones (Purple) have to be unlocked in another mission type called Skirmishes, which you unlock by progressing through the game. The materials used for this process can be purchased mostly in the Shop, earned in missions or by using the Forge itself to Recycle unwanted pieces of loot into materials. The crafted loot will be scaled to your Power Level, with the Purple tier pieces being beset by +1. Crafting becomes one of the easier ways to actually increase your Power Level throughout the game once drops start becoming harder to get via normal gameplay. Further on, you'll unlock the ability to add special skills to your Coffin and to enhance a piece of gear, which takes your desired gear and uses a higher level piece to transfer the skills and power from (pretty much also works as a transmog / glamour for pieces you find more to your liking). 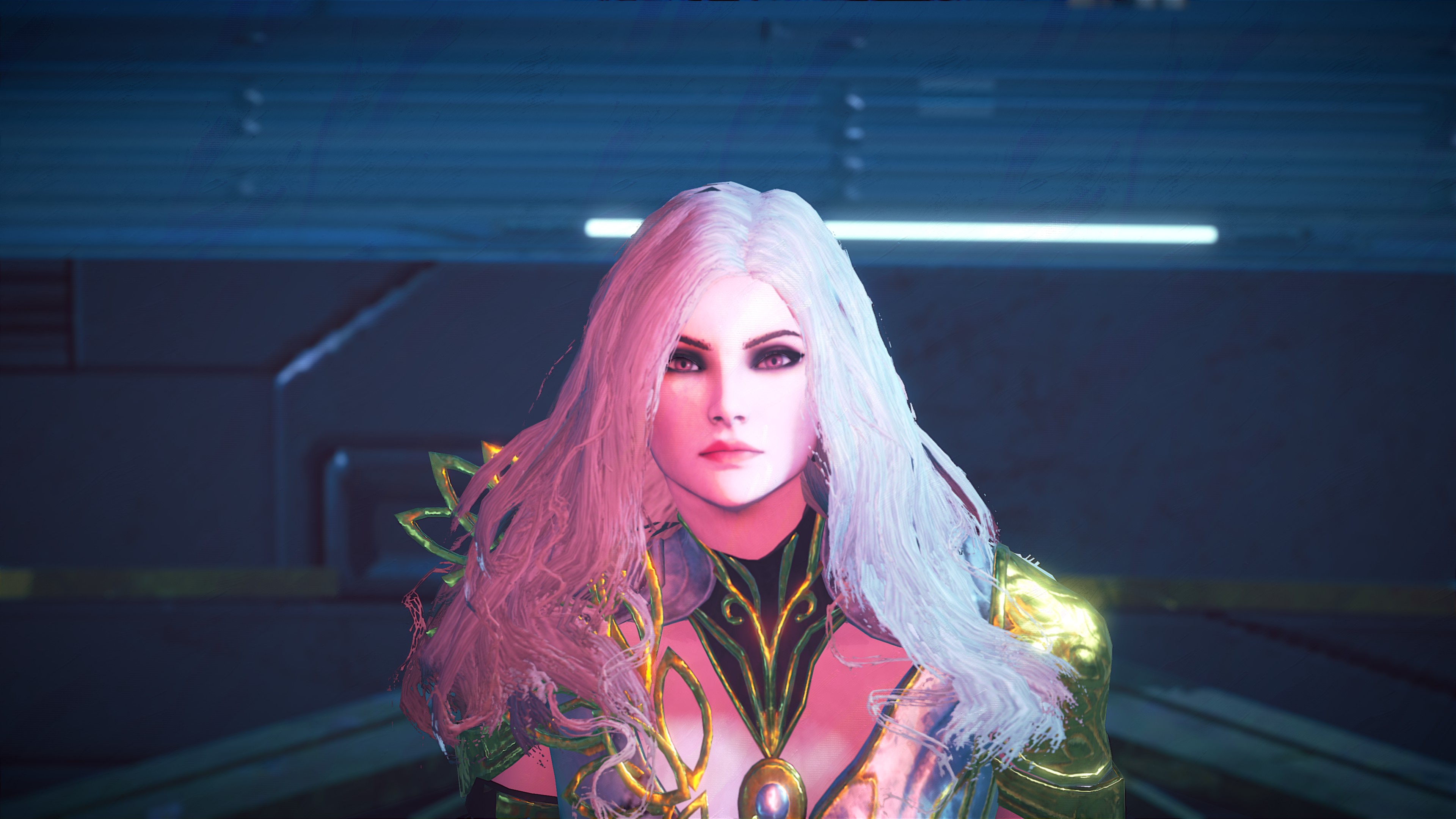 Final thoughts? The game is definitely a bit of a mixed bag that I somehow just had a blast playing through. Even though I am still against Live Service based titles, I still had a lot of fun with it, despite the gripes that I had with it. This game is mired with a lot of weird design choices, like the way the game is structured to unlock more features that would have been crucial earlier in the game - for example, you don't have a fully decked out Forge that lets you make old items stronger until almost at the very end of the game and you get your Coffin Skills so late in the game, they feel practically worthless by the time you DO unlock them. The core of the game though, I feel still has decent potential if Square and Platinum adjust the game to have more boss battles that you have to tackle with groups of people. They did implement something "similar" to this via Duels, but it's just beefed up versions of story bosses. You can pretty much clear the entire Story in around 20-25 hours.

Would I recommend this game, however? Honestly, no. The game really has to get a couple things fixed up to make the early game much more engaging, namely the way you unlock extra features. You shouldn't be unlocking basic crafting features almost at the very end of the game - in addition, they really should take a look at easing up on how many things are tied to Garaz and maybe add more Boss Fights to make the 4 player co-op more meaningful and enjoyable.

Babylon's Fall is now available for PS4, PS5 and PC.