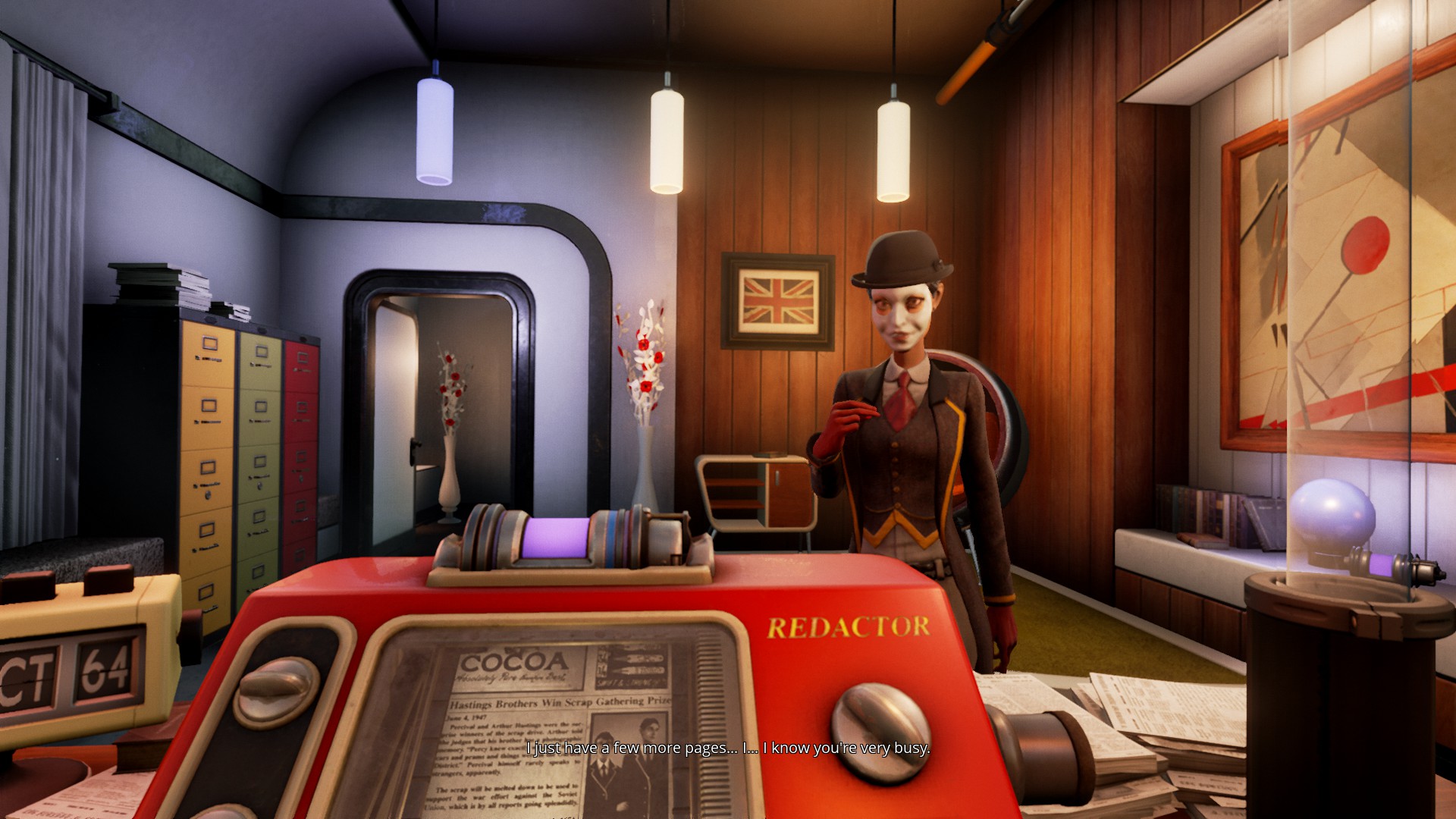 So this game has finally been released, kinda. We Happy Few has been a game I've personally been very excited to play for awhile thanks to their very impressive E3 showing a long time ago - however, I hadn't heard much good about the game since it's release in Early Access and I just decided to try it out myself and to hopefully either convince or dissuade others concerning the game.
"... SNUG AS A BUG ON A DRUG"

We Happy Few stars a regular joe by the name of Arthur Hastings, a worker at what looks to be a Newspaper Printing Company and he approves or declines articles that come into his office. One of those seemed to trigger a sort of flashback that has you choosing between taking "Joy" (A special drug in game that seems to hide how the real world is at a glance, sort of like a brainwash) or opting to not take it.  If you choose to not take it, however, the game continues on when your co-worker enters your office and invites you to an Office Party just right outside. Your coworker dons a sort of white mask (or paint?) that kinda resembles The Joker from the Batman series and this is how you and the game identify the "Joyful" Citizens from the rest of the folks you'd meet in the world.


Once your coworkers find out your character is off his joy in an event I dare not spoil - he is then chased out of the room and all the way into the sewers until he's then beaten up and taken to what seems like the outskirts of the city. Folks off their "Joy" are denominated as "Downers" a title as well as possibly a slang in the game.

Your character then wakes up locked inside a Safe House with a special guest inside and after you manage to get out, you are then set free to explore the Downer City and partake in the lunacy along with it's citizens.


Right off the bat, I personally was VERY impressed by the game's unique artstyle. It resembles a peculiarly Art Deco style found in a game like Bioshock before it and it wears it's very British-esque flair on it's sleeve and I just loved it. It has a fairly simple, exaggerated art style that also kinda reminded me of Alice Madness Returns as far as the character go and the world looks very colorful and bleak all at the same time, which is really a testament to what the game itself wants to present. We Happy Few always presents a very "Yin & Yang" sort of thing about it that's actually tied into the game's actual premise of Joy and bleakness. The texture quality, in some areas, are a little on the low quality side (Tested this on Ultra Quality on a GTX 970) but the lighting looks pretty dang good. Character models look very stylized and creepy in their own way and it's all just overall a very cool and creepy looking game. 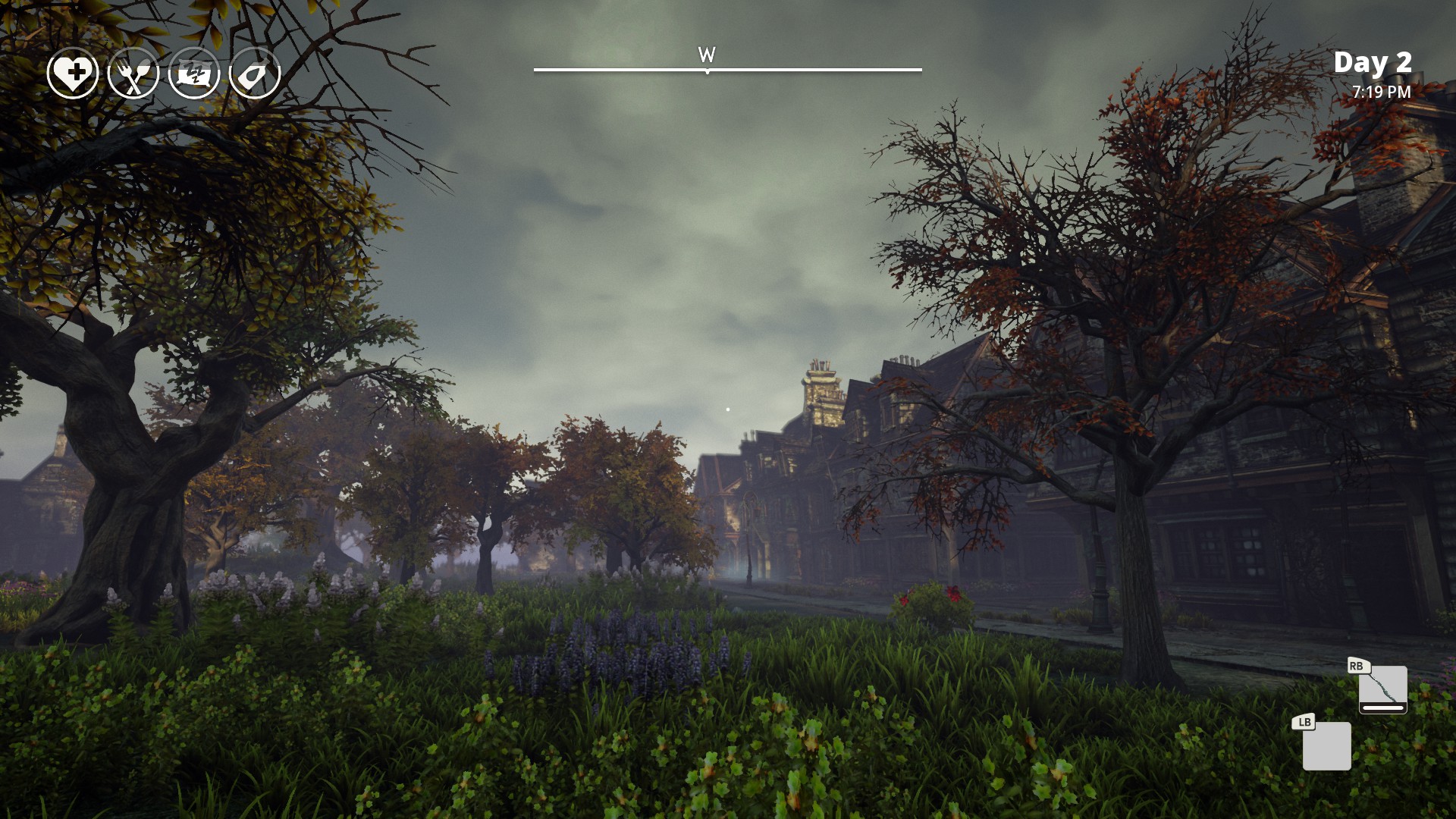 "...the game itself is riddled with a lot of bugs"


Unfortunately, the game itself is riddled with a lot of bugs and just a lot of design decisions that bog down the experience considerably - atleast in my case. I was never a fan of Survival Style games like DayZ so these systems are just not my forte.  We Happy Few feels kinda like a mixture of Fallout and Dead Island but just doesn't feel as good as the former. Granted, the game is still in Early Access - however, it feels like a complete enough game (barring the non-present story looks like). As stated above, the game shares it's similarities to the likes of Fallout & Dead Island in the way you can pick up Quests (Yes the game has Quests). Quests are generally found by walking around the area and they are generally fairly simple things, if not deadly. 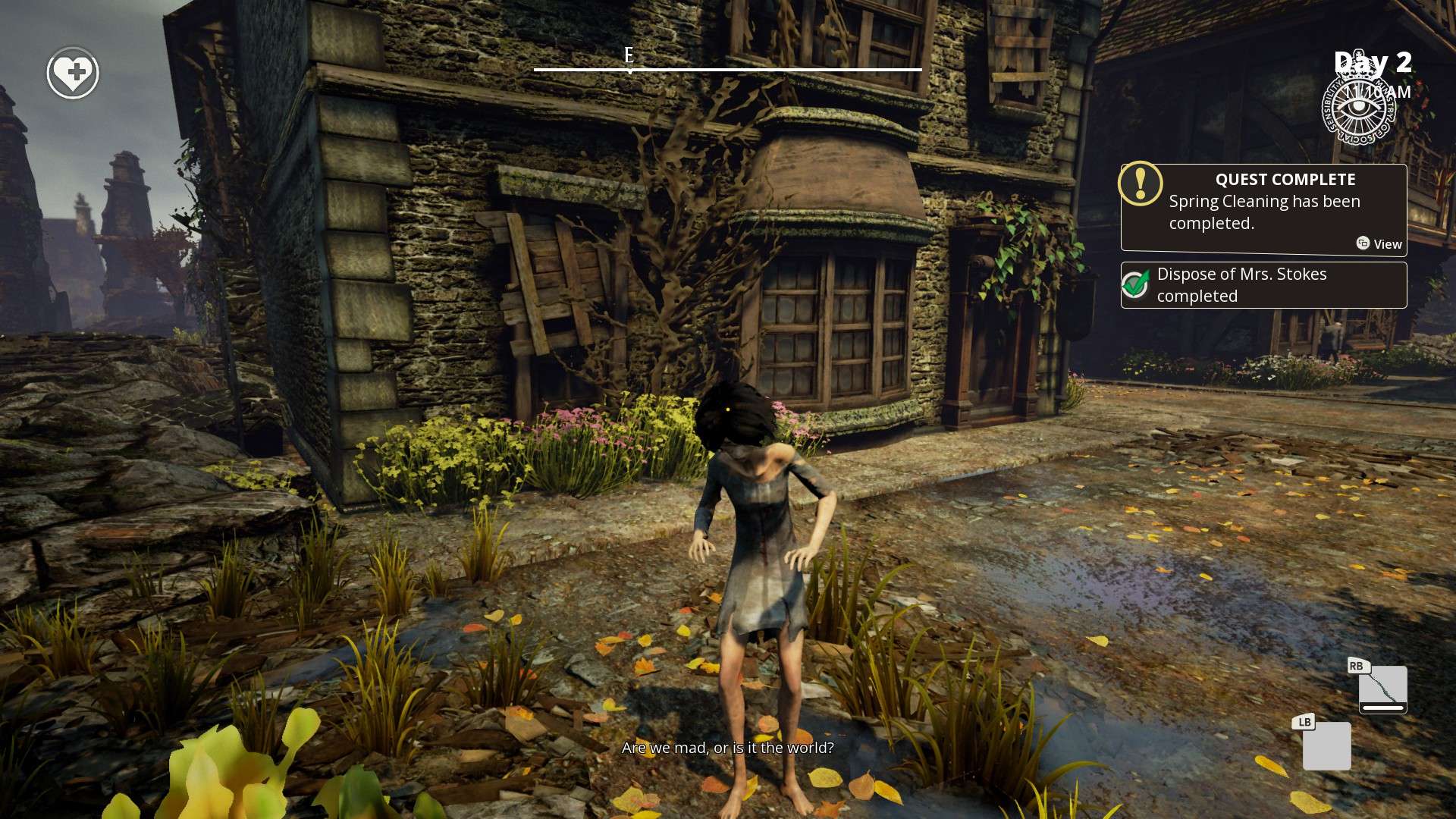 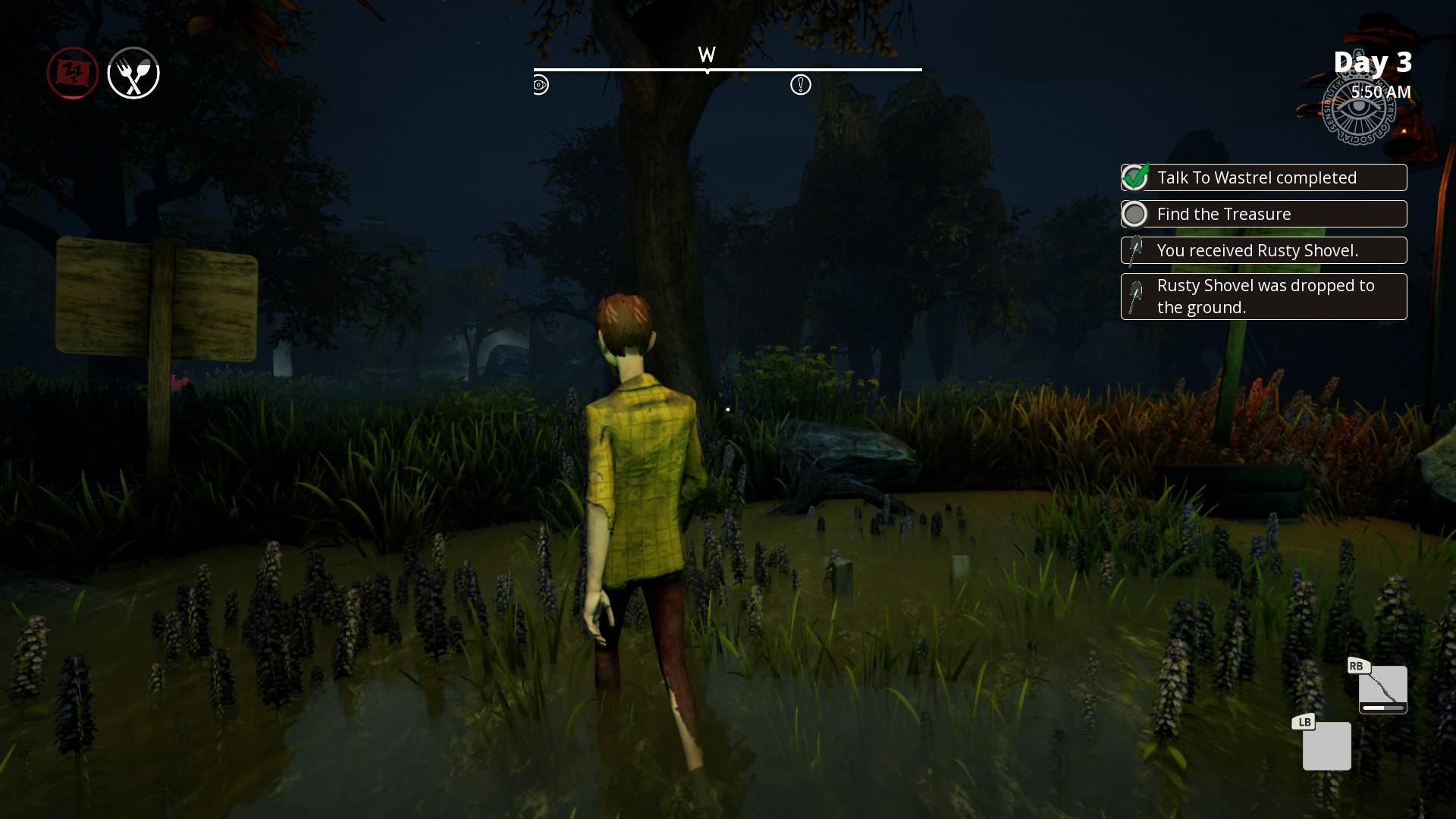 "Feels like I lost an argument with a train..."


One particular Quest Line has you picking up Syringes, bottles and other dirty assortments in a green pool of water, however the game MAY just apply all sorts of nasties at you, the worst in particular being The Plague status. Like other games in the "Survival" genre, your character can get Hungry, Thirsty, Sleepy, Sick or they can get Food Poisoning, and likely more things too. I feel like the "Survival" ticks are what ruin the game however. Your character seems to go Thirsty, Hungry or Sleepy literally within a few minutes which turn exploration into a series of micromanagement of your character, almost as bad as a THE SIMS games, this system consistently interrupting your exploration can quickly turn a fun romp in a babysitting game on top of the game just being able to randomly apply more and more penalties upon you at a relatively fast pace which can then become an even bigger problem.

The game has an option for Permadeath which may be the set standard in the full game but I don't think it's something that should be the Set standard for the game because of a good number of issues. The game has a LOT of random elements to it, particularly with "The Plague" status because you can get it randomly from standing in certain areas. The Plague status will inflict Sleepy status faster and it will automatically KILL you after some time passes if it's not treated up same thing applies from the being "Ill" status. These statuses will for sure make you play more cautiously but at the same time it will make you want to take some time to go out into the world and stock up on things you can use.

We Happy Few also has a fairly simplistic crafting System that kinda resembles that of The Last of Us as you can use pretty much anything you can find in the overworld and quickly craft materials into useable tools and then those into even more useable tools. It has a pretty stuffy Inventory System that's kinda annoying to deal with, it has basic Quest Tracking tools like a Journal and the interface itself is just kinda ho hum. It's pretty much a by the numbers kinda game so far, which is kinda disappointing. This game resembles Dead Island closely in how combat and looting works though. In combat, you can either fight unarmed and barely deal any damage or you can fight with random craftable or pick-up weapons that deal considerably more damage - there is a difference outside of damage however; usually beating up someone unarmed won't kill them whereas beating them with most weapons will kill them. 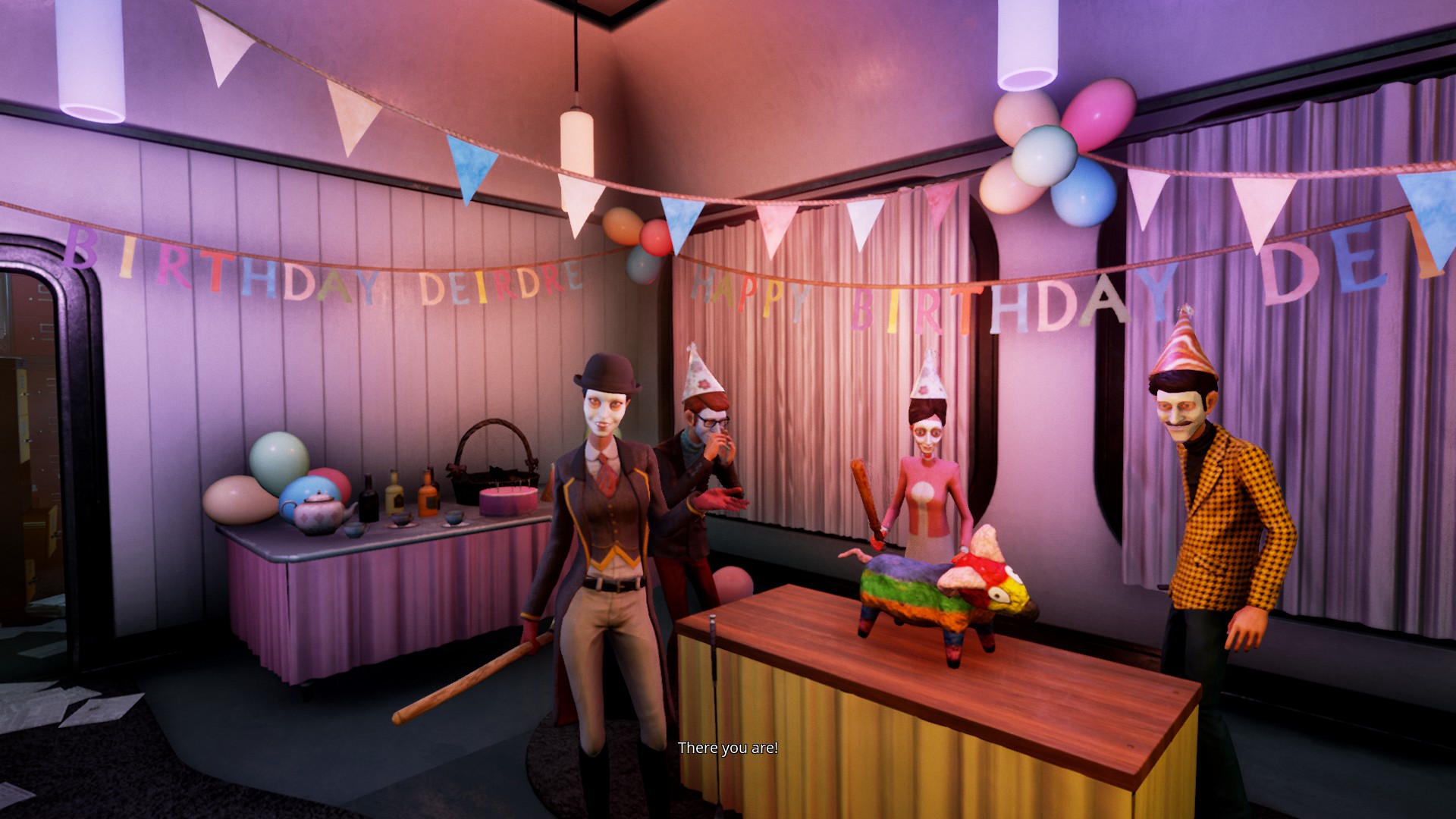 We Happy Few thus far is a fairly enjoyable game that I'm definately looking forward to playing more of. It IS a pretty buggy game at the time of writing and it DOES have Performance Issues though, so a bit of a buyer beware at this point. I enjoyed it a lot from what I played though - outside of the kinda forced in "Survival" Elements to it,which I still believe is the key lowest point of the game, it's a very interesting, beautiful and creepy world to explore and I personally can't wait to find out more about the game's lore and world when the full game is released.