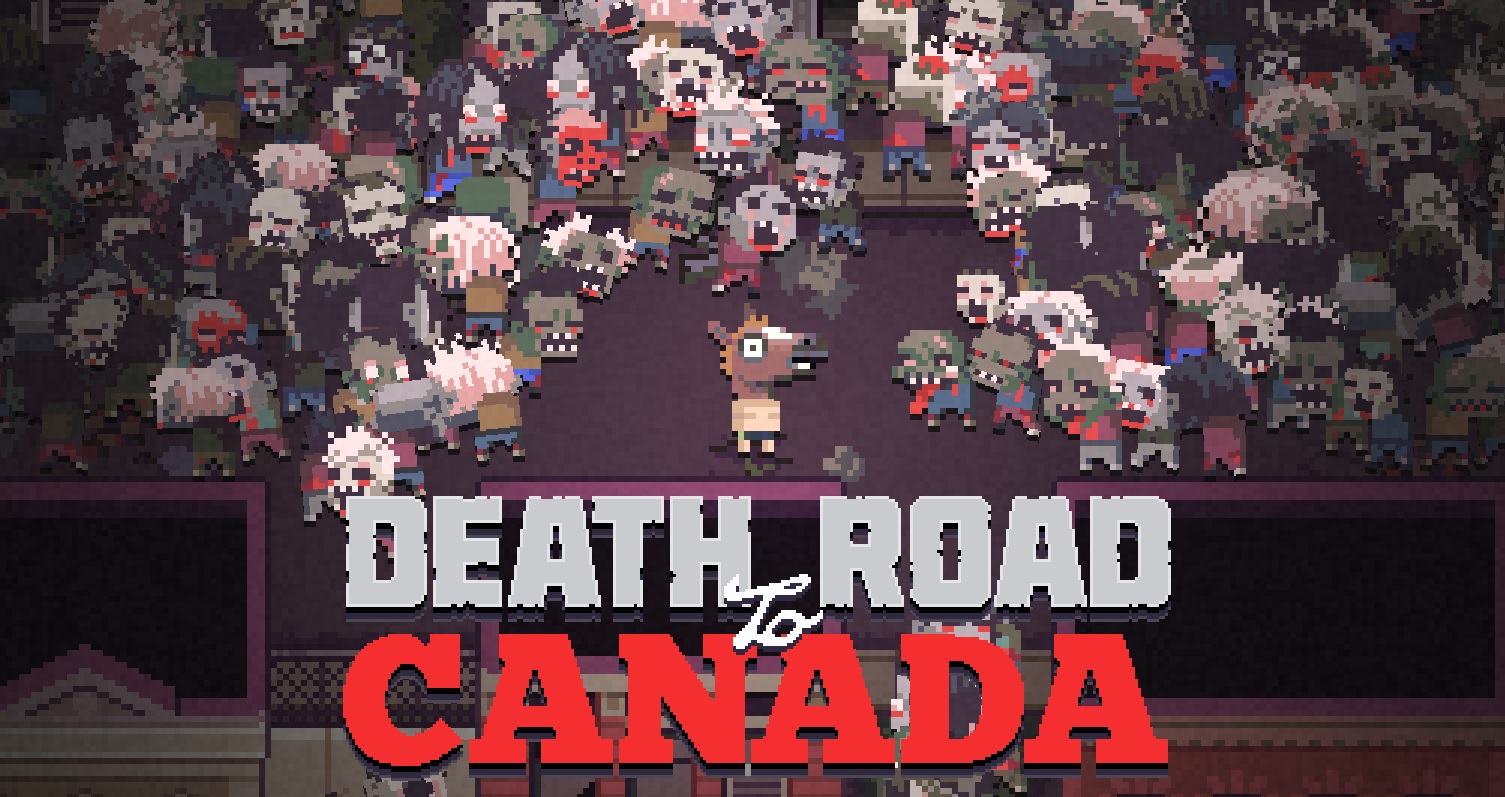 STEAMBOX Reviews is a kind of "Section" I'm gonna do for both New and Older Indie Games released across Steam and today we'll be taking a look at a little gem called Death Road to Canada.

This game's premise is pretty much a mixture of Oregon Trail and tidbits of other games that feature looting and simplistic top down melee combat that adds in random, quirky humor and lots and lots of zombies. Your goal is to essentially make it to Canada where - there are no zombies for some unexplained reason - and surviving the road along the way. 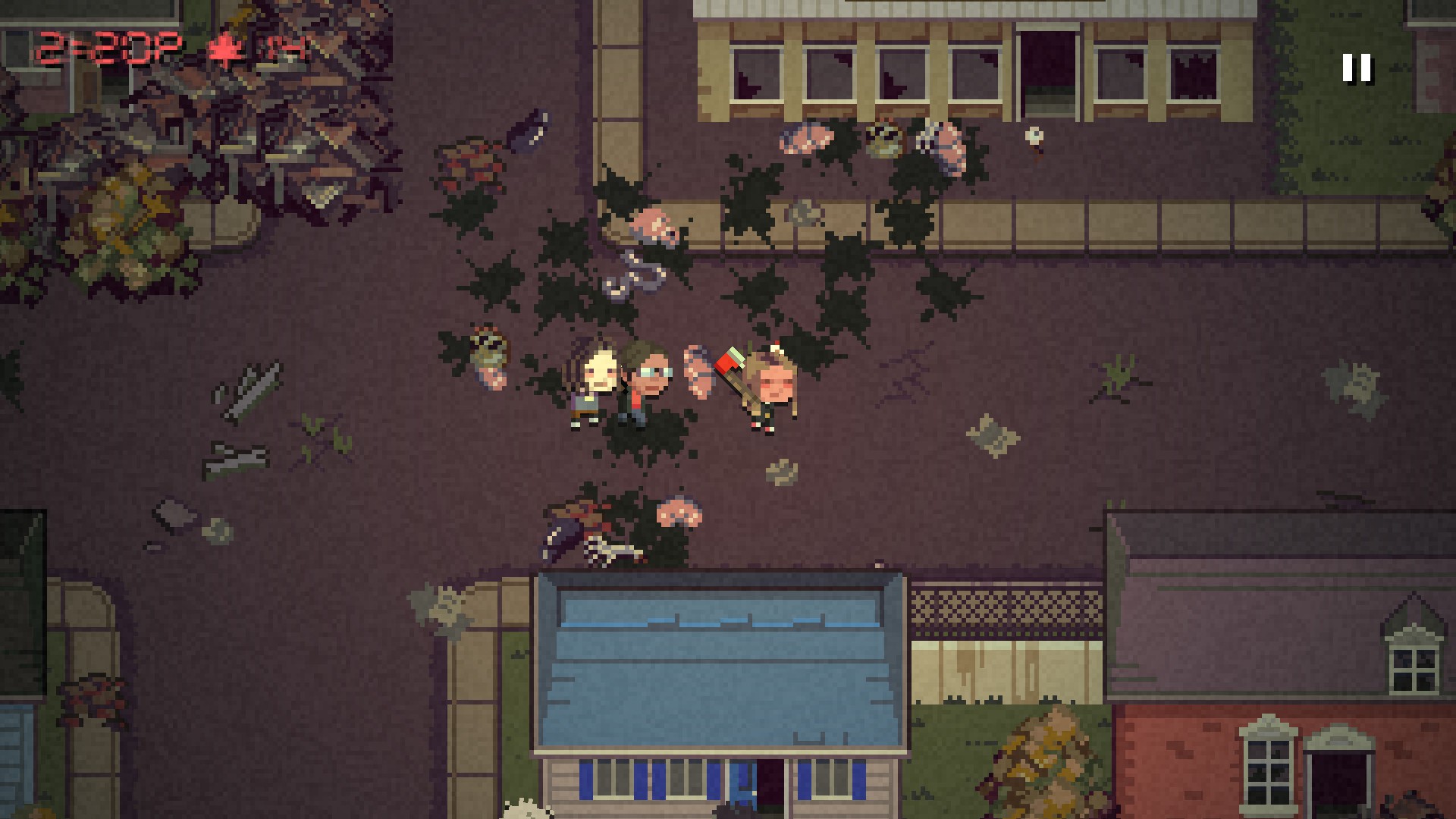 Death Road to Canada sports some old school Pixel art for it's exploratory assets and characters and it's a style that's a little bit overused at this point, but for this game it just *works* nicely. The game does have a kinda annoying Film Grain effect to it, as it's a standard of Zombie titles, but you do have the option of turning it off, which is great.  It carries a pretty dark, moody and grim atmosphere to it that's extremely offset by the music (more on that below) that is, again, very common in zombie titles. You may have realized this by now... but this is pretty much a standard looking zombie title, it has a fair bit of standouts, for example, "Special" characters that don't really fit the tone of the game, there is a guy with a horsemask, there is an actual magical girl that shoots beams of love and emotes for every attack, and many more humorous surprises in store.

The game manages to offset it's extremely dark and gory tone with it's extremely quirky humor that have the special characters mentioned above, and it has events in game that range from wacky - like your characters approaching a campsite full of people that are smelly and you can choose to ignore the smell and sleep in anyways and then the following screen says your characters endured "The Smell Zone" or they just say random stuff in the Travel Sections. 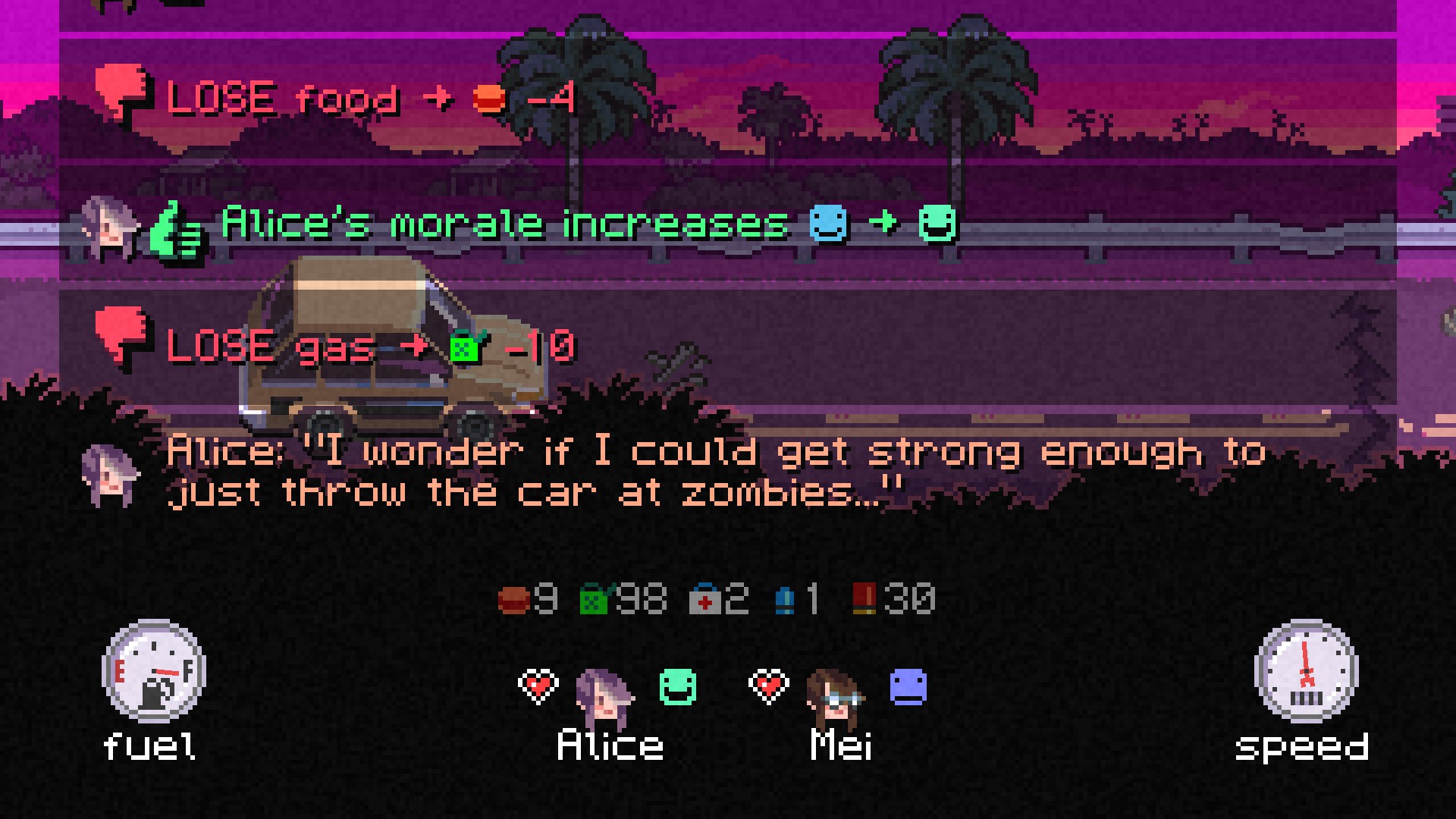 Death Road to Canada has a fair amount of supplies you need to keep track off as well, all of which can be very important. You've got your Food, Gas, Medical Supplies, Ammo and then each character that you can control have their very own set of stats that will also help or hinder things that can pop up along the way.  Along the road, you can have little events where your characters consume food in a camp and get some sleep, you can have events where bandits raid your team, you can have events where one of your characters will fight a bear (Yes this is a thing) and a lot more and this is where the rest of your supplies come into play. When running low on food your characters' health can start to drop and their Morale will very quickly drain and remaining hurt will likewise do the same; if your vehicle runs out of gas you'll eventually be forced to grab a new vehicle in the middle of a zombie crowd, which can often lead to a fairly quick death. Out along the road as well, you can have little quirky events that can quickly snowball into your characters getting hurt or potentially getting killed. 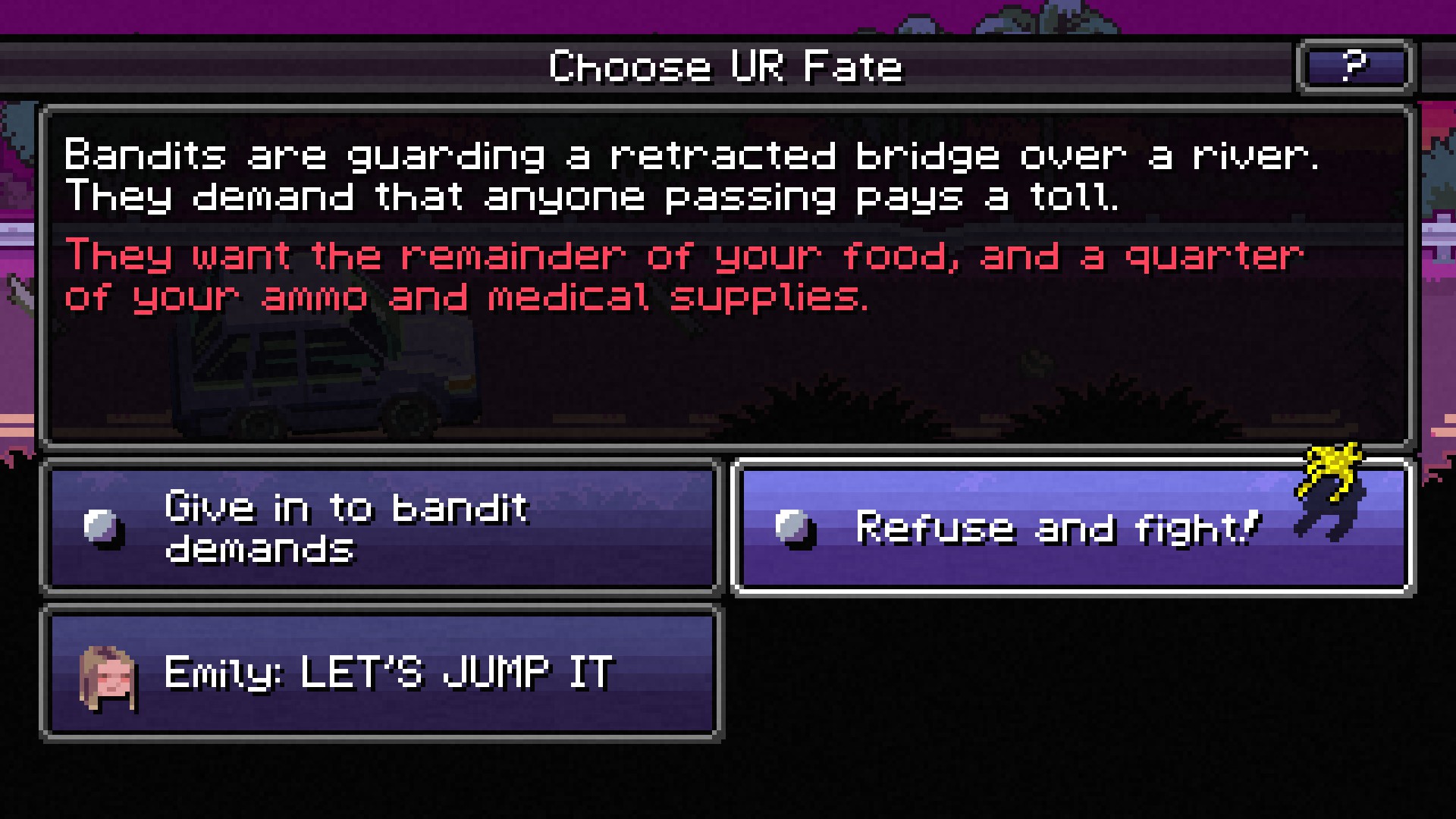 The game is essentially split into two different games, and the second part is more generic, top down combat/exploration sections. These sections can be fairly big and it actually represents the main bulk of the game. Combat is simplistic, but very frantic and it takes character statuses from the main Death Road mode such as being tired or hurt and those can affect the speed of your character in combat. A tired character will take much longer to recover from every swing which can be very deadly mid combat. While in combat, the zombies themselves don't do immediate damage to your health unless they 'grab' you. Basically, your main combat sections are either just simple exploratory missions or what the game calls a "Siege Mode" which just pits your characters to survive against a colossal zombie horde.

Death Road to Canada also has a pretty nifty Character Creator built into it and lets you either play as created characters, or pre-made characters/ It offers a pretty healthy selection of Face types, hats, shirts and pants that makes the creator a lot of fun to use! 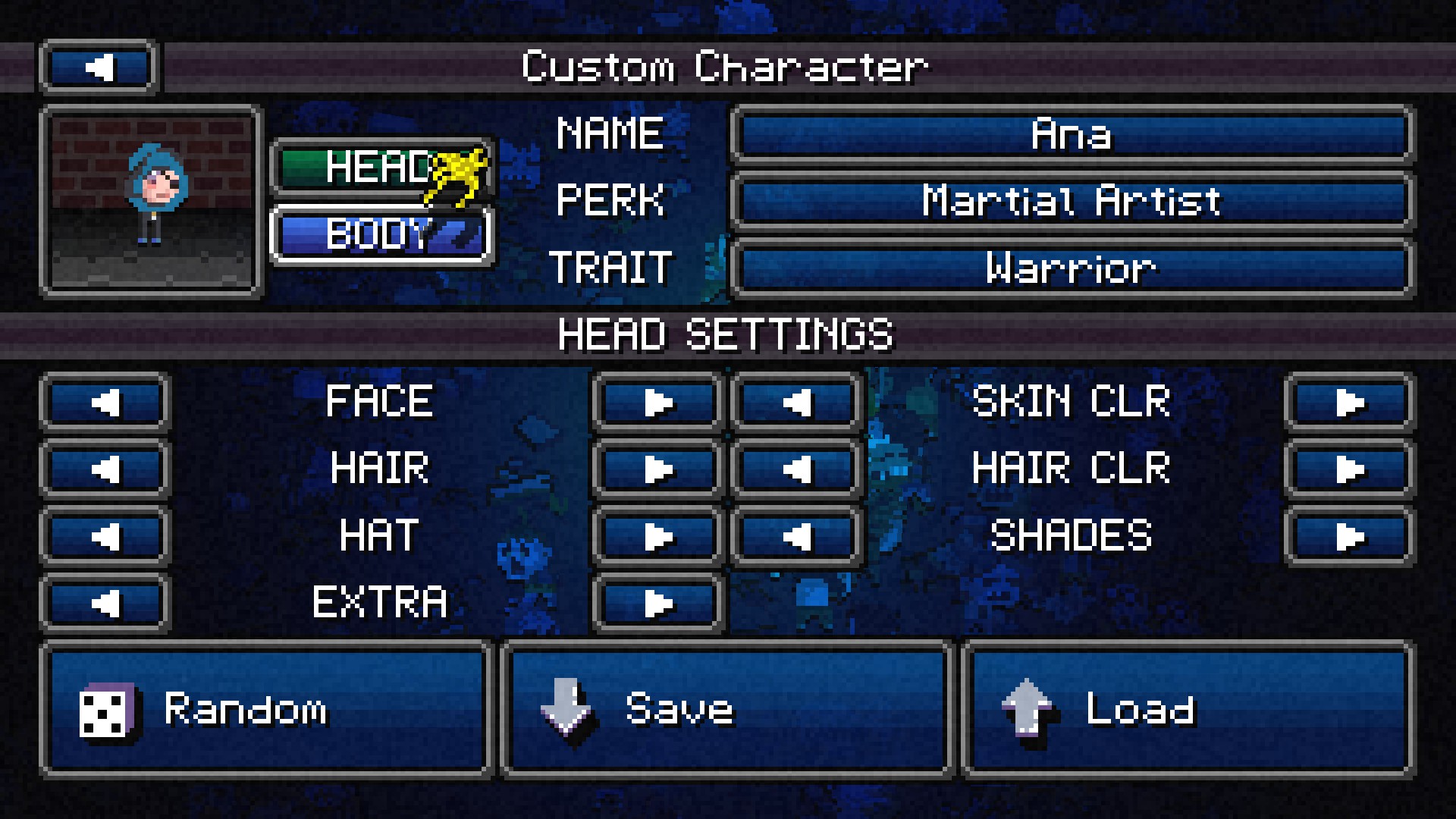 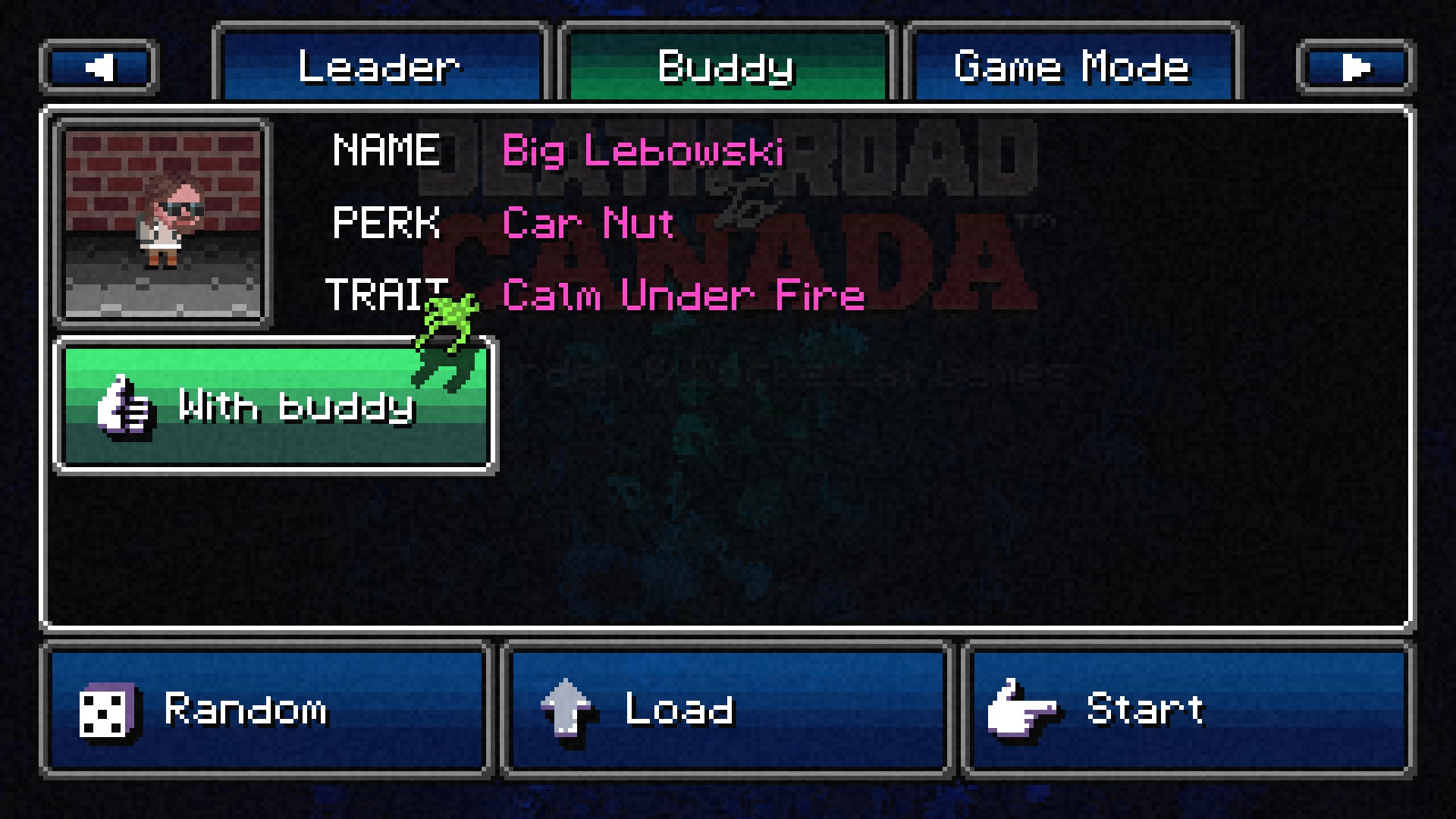