NOTE: This key will redeem in EU regions only 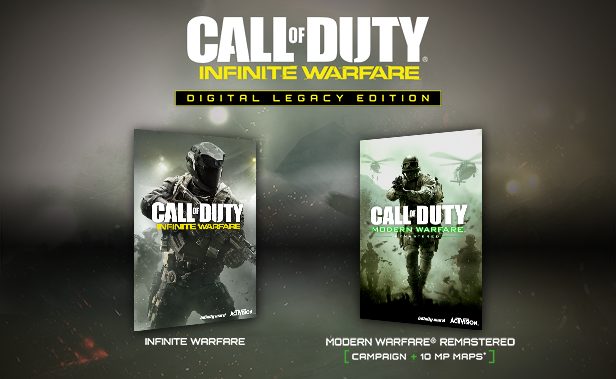 Campaign is a return to the gritty, military roots of the franchise, while boldly looking ahead, delivering a rich and engaging narrative. The player will embark on a classically-styled story about grand scale warfare, set in a future where human conflict has spread throughout our solar system.

Multiplayer will feature an evolution of Call of Duty’s movement system with an emphasis on front-line engagement. Maps are designed to further leverage the movement system and immerse players into fast, fun, and frenetic gameplay.

The new Zombies mode will thrill co-op players with an original, distinctive approach and an uproarious narrative sure to excite fans.

One of the most critically-acclaimed games in history, Call of Duty 4: Modern Warfare is back, remastered in true high-definition, featuring improved textures, physically based rendering, high-dynamic range lighting and much more for a new generation. Relive the iconic campaign as you are transported around the globe with Capt. Price, Gaz and Soap across fan favorite missions. Team up with your friends in the online mode that redefined Call of Duty introducing killstreaks, XP, Prestige and more in customizable, classic multiplayer modes. 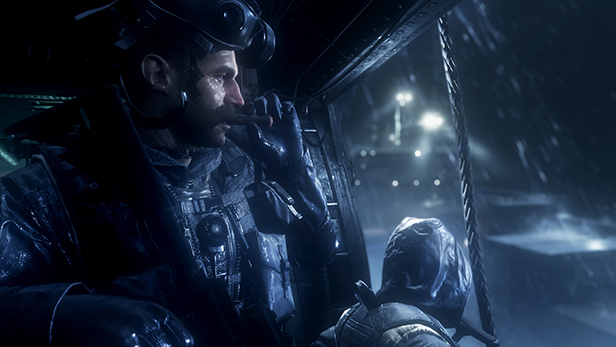 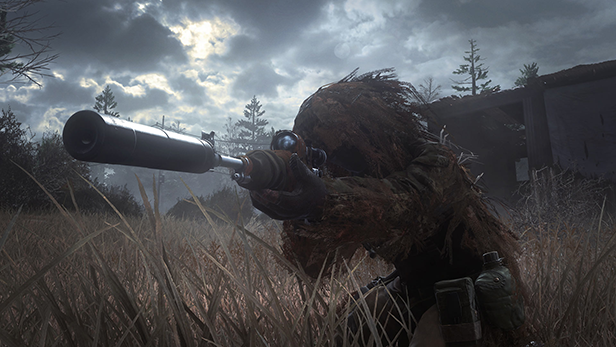 Infinity Ward, the award-winning studio that helped create the blockbuster Call of Duty franchise, reaches new heights with Call of Duty: Infinite Warfare. At its core, Infinite Warfare returns to the roots of the franchise where cinematic, immersive storytelling takes center stage as told through an unfolding large-scale war and epic battles that deliver an authentic Call of Duty experience.

Call of Duty: Infinite Warfare delivers something for every Call of Duty fan with three unique game modes: Campaign, Multiplayer, and Zombies. Delivering a rich and engaging narrative in a setting unlike anything to date in a Call of Duty game, the campaign is a return to the franchise’s gritty, military roots throughout new environments never before seen in the franchise.

The player will embark on a classic war story about grand scale naval warfare; all set in a grounded future where human conflict has spread throughout our solar system. Multiplayer action combines Call of Duty’s popular chained-based movement system with ground-breaking gameplay innovations to deliver the deepest and most engaging Call of Duty experience to date. The title introduces stunning, never before seen, multi-planetary environments, new weaponry, and all-new player abilities to Call of Duty. In addition, the new Zombies experience will thrill co-op players with an original, direction featuring fun and unique gameplay, all wrapped into an uproarious narrative sure to excite fans.

Call of Duty: Infinite Warfare will take players on an unforgettable journey as they engage in heroic battles from Earth to beyond our atmosphere against a relentless, enemy faction that threatens our very way of life. It’s grand scale war and hallmark boots-on-the-ground Call of Duty action with memorable characters, rich emotional arcs, and stunning new environments, all within an epic new setting.

A CALL OF DUTY CAMPAIGN TO REMEMBER

Call of Duty: Infinite Warfare puts storytelling front and center, in a deeply engaging narrative. It features jaw-dropping set-pieces and blockbuster cinematic moments, while also delivering a gripping portrayal of war that harkens back to the roots of the franchise. Infinity Ward also breaks new ground by thrusting the player into wartime leadership as Captain Reyes, a Tier 1 Special Operations pilot, who takes the helm of the Retribution, one of Earth’s last remaining warships. In a time of unthinkable hardships, Reyes must lead the remnants of coalition forces against a relentless foe in a war that spans our solar system.

The Settlement Defense Front (SetDef) represents a splinter group of insurgents that broke away from the United Nations Space Alliance during a war of secession, years ago. In the world of Call of Duty: Infinite Warfare, our planet has been stripped of its natural assets through population growth and industrial expansion. The people of Earth now rely upon colonies throughout the solar system to mine planets and asteroids for necessary fuel and other resources. The SetDef is a fascist power, comprised of brutal and militant radicals, toughened by the extreme conditions of offworld environments. They seek to control those outposts and their wealth, putting a stranglehold on the countries of Earth. After years of uneasy stalemate, diplomatic relations are strained, and it will take only the slightest nudge to lead to full-scale war.

GEAR UP FOR INTENSE MULTIPLAYER

Call of Duty: Infinite Warfare will incorporate the popular chained-based movement system players know and love into an innovative multiplayer experience that rewards players more than ever before for utilizing their surroundings and applying strategy in the heat of the moment. Maps are designed to further leverage the chained-based movement system and immerse players into fast, fun, and frenetic gameplay that players have come to expect from Call of Duty. With its new approach to play, multiplayer will bring innovative gameplay that challenges players to achieve their goals in creative ways based on their specific play style.

BATTLE THE LIVING DEAD IN A ZOMBIES THRILLER

Infinite Warfare Zombies brings a totally fun, wickedly fresh take to Call of Duty Zombies. Zombies in Spaceland will transport players back in time to a 1980’s amusement park complete with a plethora of rides, an awesome arcade, and a funky, functioning rollercoaster. Embrace previously beloved aspects of the mode like tons of easter eggs, power ups, perks, and radical weapons while experiencing innovations like brand-new team mechanics, the After Life Arcade, and Fate and Fortune Cards. And, of course, a killer good 80s soundtrack.

Scan your first weapon!
Boots on the Ground

Use the computer in the Captain's office.
Gear Up

Get your first kill on the most-wanted board.
Make it Personal

Load out with a custom weapon.
Operation Port Armor

Clear half of the most-wanted board.
Operation Grave Robber

Earn all Jackal weapons and upgrades.
Peace to the Fallen

Listened to all of the death letters of the fallen.
Operation Trace Kill

Kill 15 enemies with a zero G grappling hook.
The Bigger They Are

In Spaceland, defeat 5 Brutes in one game without dying.
Rock On!

In Spaceland, craft a Weapon of Rock.
Brain Dead

In Spaceland, play 30 games and get to scene 10.
You Know Nothing

Complete all Single Player missions on Veteran.
Batteries Not Included

In Spaceland, find all of the quest items and complete the sticker pack.
Sooooul Key

In Spaceland, recover the piece of the Soul Key.
Gun Nut

All weapons scanned.
Hoff The Charts!

(Secret achievement)
Pump It Up

In Rave in the Redwoods, Pack-a-Punch a weapon.
Fully Equipped

Earn all equipment upgrades.
Ride For Your Life

In Rave in the Redwoods, ride every zipline.
Stick 'em

In Rave in the Redwoods, earn 100 kills with an upgraded crossbow.
Message Received

In Rave in the Redwoods, recover the piece of Soul Key.
I Love the 80s

In Spaceland, play every Arcade game at least once.
MAD Proto

In Attack of the Radioactive Thing, assemble the M.A.D. (Modular Atomic Disintegrator).
Some Assembly Required

In Shaolin Shuffle, build all the craftable items in a game.
Soul Brother

In Shaolin Shuffle, collect all the newspaper clippings.
Double Feature

In Shaolin Shuffle, recover one piece of the Soul Key.
Sliced and Diced

In Shaolin Shuffle, Pack-A-Punch the final Weapon.
Beat of the Drum

In Rave in the Redwoods, complete your photo collection and mementos.
Dominion

In Rave in the Redwoods, kill the Slasher with his weapon.
Hallucination Nation

In Rave in the Redwoods, stay in Delirium for 5 minutes after scene 10.
Super Slacker

In Rave in the Redwoods, unlock Kevin Smith.
Top Camper

In Rave in the Redwoods, earn all camp badges.
Book Worm

In Shaolin Shuffle, find and collect all bios for AJ, Andre, Poindexter and Sally.
Bait and Switch

In Attack of the Radioactive Thing, restore and use all traps.
Friends Forever

(Secret achievement)
Belly of the Beast

(Secret achievement)
Mistress of the Dark

In Attack of the Radioactive Thing, recover the piece of the Soul Key.
Shaolin Skills

In Shaolin Shuffle, max all Chi abilities in a single game.
Exterminator

In The Beast From Beyond, collect the final piece of the Soul Key.
Quarter Muncher

In Attack of the Radioactive Thing, complete Skullhop.
Dear Diary

In Attack of the Radioactive Thing, listen to all of Willard’s personal recordings.
Broken Record

In The Beast From Beyond, complete Skullbreaker.
Egg Slayer

In The Beast From Beyond, kill zombies with every trap.
Message Sent