In a land torn asunder by incessant warfare, it is time to assemble your own band of hardened warriors and enter the fray. Lead your men into battle, expand your realm, and claim the ultimate prize: the throne of Calradia!

Install and play one mod.
Get up Stand up

Cleanse the town of bandits in the opening mission.
Good Samaritan

Help a lord or party win a fight.
Abundant Feast

Engage in a conversation with a hero character through the party screen.
Medieval Times

Have a -50 relation with a lord, village, or faction.
Sold into Slavery

Raise your soldiers' morale from low to excellent.
Knights of the Round

Get either two strength related skills to 5 or one to 7.
Force of Nature

You and your army have killed or wounded 5,000 enemy troops.
Help Help I'm being Repressed

Camp in the Sarranid region of the map.
Best served cold

Land a shot with a difficulty of 10 while using a bow and arrow.
Migrating Coconuts

Pick a fight with a lord by insulting him or by challenging him to a duel.
Old school Sniper

Land a shot with a difficulty of 6 while using a crossbow.
Agile Warrior

Get either two agility related skills to 5 or one to 7.
None Shall Pass

Have two of the following skills at a 5; Trainer, Tactics, Leadership, or Persuasion.
The Bandit

Make one of your melee weapon skills 250.
Man Eater

Finish reading one book through the camping screen.
Khaaan!

Become the owner of at least 5 fiefs.
Calradian Tea Party

Make your own faction.
Look at the Bones!

Make one of your ranged weapon skills 250.
Calradian Army Knife

Kill 10 enemies with a throwing weapon's secondary function.
Talk of the town

As a female character, raise your renown to 50.
Got Milk?

Steal 3 cattle from a single village.
Happily ever after

Kill 10 parties of Mountain Bandits.
Mind on the Money

Have two of the following skills at a 5; Looting, Inventory Management, Trade, or Prisoner Management.
Baron got back

Win a battle against a lord or party who previously beat or captured you.
Every breath you take

(MP) In any multiplayer mode have more kills than deaths.
Concilio Calradi

As a ruler have 3 vassals.
Bring out your Dead

Get one of your healing skills to 5.
Last man standing

(MP) Win one round in battle mode.
This is our land

(MP) Your team successfully defended a castle in siege battle mode.
The Ranger

Have a 7 in one of the following skills or a 5 in two; Tracking, Path-finding, or Spotting.
Autonomous Collective

Get the engineering skill up to 5.
I dub thee

Promote one of your followers into a position of power.
Glorious Mother Faction

(MP) Win a round of team deathmatch mode.
Victum Sequens

As a ruler conquer 10 towns or castles.
The Holy Hand Grenade

As a female character get into a duel with male lord by insulting him.
Gambit

Land a shot with a difficulty of 5 while using a throwing weapon.
Heart Breaker

Get a character to elope.
Queen

As a female character, make your own faction.
Elite Warrior

(MP) Win a round of deathmatch mode.
Man Handler

(MP) Kill 25 people with throwing weapons.
Lady of the Lake

As a female character, give a companion character a great sword.
Spoil the charge

(MP) Kill 50 cavalry while on foot, the enemy must be killed while mounted.
Kingmaker

Put a pretender on their rightful throne.
Ruin the Raid

Rule all of Calradia!
Iron Bear

You have completed the following achievements: Mace in yer Face!, Spoil the Charge, Agile Warrior, and This is our land.
The Huscarl

As a female character, help a female claimant reclaim her throne.
Harassing Horseman

As a female character, become queen of all Calradia.
Charger 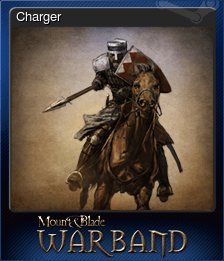 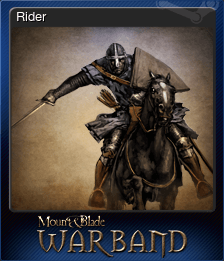 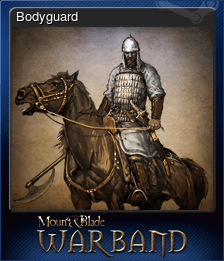 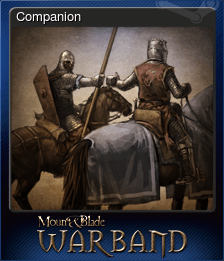 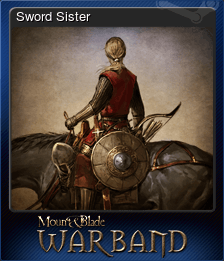 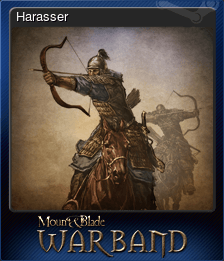 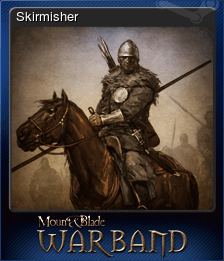 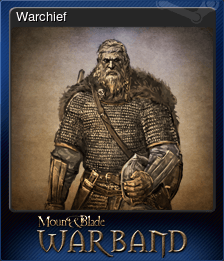 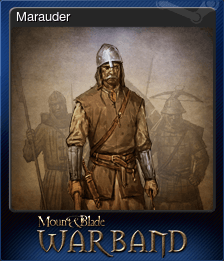 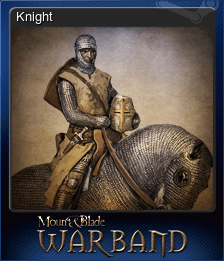