Visiting Rome from Chicago, where he works as a doctor, ex-priest James Murphy answers a mysterious call for help from his friend Cristoforo. The disappearance of a briefcase containing compromising documents is enough to convince James that his friend is a victim of something shady and sinister. The Vatican's involvement and some strange parallels with his own traumatic past inspire James to get to the bottom of this mystery.

Along this dangerous and disturbing path, James finds the most unlikely travelling companion who will question his deepest beliefs. And so the two characters begin both a physical journey in search of the truth, and a metaphysical exploration of the inner soul and the darkest secrets that everyone hides, even a "champion of the faith" like James.

Rome is the stage for this adventure – a city bathed in eternal twilight, its skies tinted the color of blood spilled in more than thirty years of intrigue: blood of innocents and guilty, unknown and famous victims alike.

Finish the tutorial by stitching Mario's wound
The game is on

Find the first clues about the Cristoforo investigation
Zen Master

Get ready for hell by ruining sister Candida
Attentive reader

Face an adventure clichè: the diary!
Take that, dr. Jones

Find something that belonged to the jeweler
Italian memories

...it maybe makes sense in another game?
Lots of space here...

Complete Shadows on the Vatican Act I
Harder path

Solve a puzzle using the calendar at home
Look, a bush!

It's not pixel hunting if you have a magnifier...
Audere Semper

Elisa, we hold you in our hearts
Math Ace

Complete the adventure in less than two hours
Lights off

Follow the car to its destination without making mistakes
Ho ho ho!

Try entering from the chimney on December 24th
Sister Candida 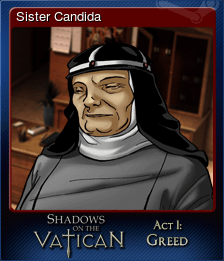 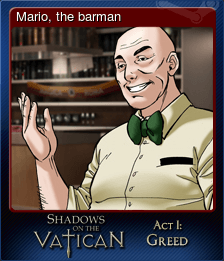 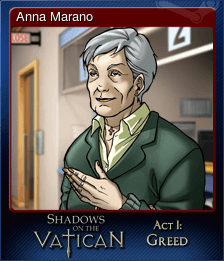 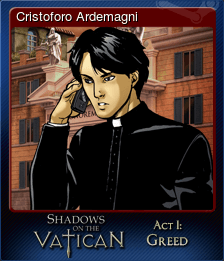 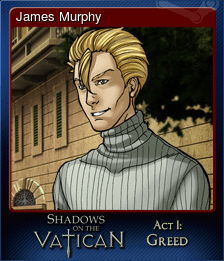 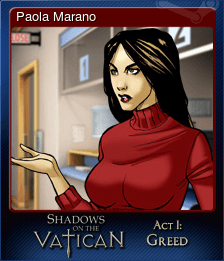