note: this product requires on of the following virtual reality headsets in order to play - htc vive, oculus rift or windows mixed reality 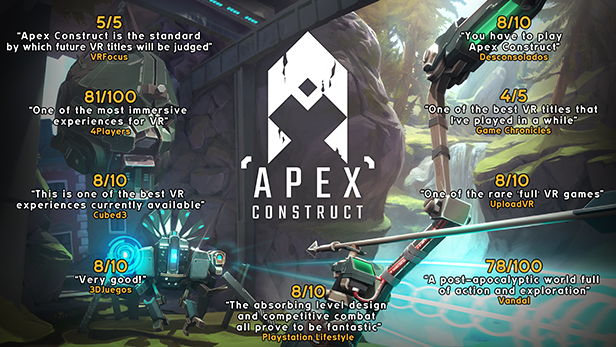 Apex Construct is a story-driven, single player action/adventure made exclusively for VR. Wield an upgradable cyber bow & shield combination to battle enemy robots while exploring a shattered world, gradually realizing what led to the extinction of mankind. Also includes Cygnia Cup Challenge, a competitive game mode where you take out shooting targets and enemies in the arena to dominate the global leaderboards.

EXPLORE A WORLD RIPPED APART
Step into a beautiful yet perilous post-apocalyptic setting, where two powerful AIs are locked in a drawn-out conflict. As the only living human, you will uncover its many secret areas and solve intriguing puzzles to gradually realize what led to the extinction of almost all organic life

DELVE INTO A LASTING EXPERIENCE
Replay any mission from your customizable home base to uncover paths still hidden, spend acquired resources to upgrade your weapons and equipment, and display your hard-earned achievements for fellow adventurers

MASTER THE 'CYGNIA CUP CHALLENGE'
Hit the targets, keep the combo meter up and maximize your score in the pre-apocalyptic arena to dominate the global leaderboards.

Available for Arcades on SpringboardVR

Spend RP at a Vending Machine
Disturbing the peace

Hurt/kill an enemy with a Radiance Mine
No doors, no masters

(Secret achievement)
This is the end