The Dark Ages might be drawing to a close, but Europe is still in turmoil. Petty lords vie against beleaguered kings who struggle to assert control over their fragmented realms. The Pope calls for a Crusade to protect the Christians in the Holy Land even as he refuses to relinquish control over the investiture of bishops - and their riches. Now is the time for greatness. Expand your demesne and secure the future of your dynasty. Fill your coffers, appoint vassals, root out traitors and heretics, introduce laws and interact with hundreds of nobles, each with their own agenda.
A good lord will always need friends to support him. But beware, as loyal vassals can quickly turn to bitter rivals, and some might not be as reliable as they seem... Stand ready, and increase your prestige until the world whispers your name in awe. Do you have what it takes to become a Crusader King?
Crusader Kings II explores one of the defining periods in world history in an experience crafted by the masters of Grand Strategy. Medieval Europe is brought to life in this epic game of knights, schemes, and thrones...

add to wishlist
The Marriage Game

Have your spouse assassinated
One is not Amused

As a ruler have a council that is not content.
Crusader

Fulfill the goal of a Crusade
Exalted Among Men

Fulfill the Become Exalted ambition
It's Good to be the King

Have someone owe you a Favor
Paragon of Virtue

Successfully intervene in a youth's development to force one of your own traits onto them.
Stargazer

Build an Observatory
No Solicitors

Go into Seclusion.
Pay to Win

Build a Hospital.
Not a Tribe

Play as a Tribal Ruler and Reform to Feudalism
Dragon Blood

Go on a Hajj to Mecca
Keeping it in the Family

Sire a child that has the Inbred trait
Celebrity

Amass more than 15,000 in prestige
New Ways for Old Gods

Reform one of the Pagan religions
A Pope of My Own

Set up an antipope
Mercotransaction

Create a mercenary band and have them bring in money for you.
It's Better to be the Emperor

As a Patrician, win an election and become Doge
On English Neck a Norman Yoke

Starting in the "High Middle Ages" bookmark as William the Bastard, become the King of England
Merchant Prince

Amass more than 20,000 in wealth
An Honest Mistake

From Seclusion, kick someone out who did not have the plague.
Saint

Amass more than 10,000 in piety
All Three Popes

Hold the kingdoms of England, Scotland, Wales and Ireland
The Yes Men

Have all members of your council be Loyalists.
Crusader King

Become Grandmaster of any devil-worshiper society.
I Shed Blood of Saxon Men

As a Christian non-Saxon, completely conquer Saxony in a game starting in 769
Bring it On

Kill your prey in the Epic Hunt
Let’s Play

Play as a Tribal Ruler and Reform to Merchant Republic
Pentarch

Divorce a Lombard Princess as a Christian
Viking Raider

As a Viking, return home with 1,000 worth of loot
Snipped off to China

Send a Eunuch to the Chinese Emperor.
Russkaya Pravda

As a character with the Russian Culture, hold the Empire of Russia
Aptly Named

Die from the Black Death.
Legacy of Rome

Restore the Roman Empire
I Got Better

Recover from the Black Death.
Holy and Roman

Starting in the "High Middle Ages" bookmark as Harald of Norway, become the King of England
Beyond the Indus

As a ruler of non-Indian culture, conquer a King or Emperor title in India
Protector of the Holy Places

Have Rome, Jerusalem, Mecca and Medina within your Realm
I can see its Stripes

Kill a tiger by your own hand
Dream Home

As a Patrician dynasty, build every upgrade for your Family Palace
Off with their heads!

Execute 10 or more prisoners in a single action.
Survivor

As a Catholic, have a border with Miaphysite Abyssinia
Close Call

From Seclusion, kick someone out who had the plague.
Kingdom of David

As a Jew, create the Kingdom of Israel
The Frisian Coast is Long

As a woman, have three different husbands killed
And Stay Out!

Throw the Aztec invaders back into the sea
The Outside Bet

Starting in the "High Middle Ages" bookmark as Svend II of Denmark, become the King of England
Trade Empire

As a Zoroastrian, become the prophesied Saoshyant
There Can Be Only One

Have seven courtiers with the Dwarf trait
S.P.Q.R.

As the Roman Empire, reclaim the old imperial borders
Empressive

As a Muslim, crush a Decadence revolt
A Curious Trinket

Send an invaluable artifact (Quality: 4 or 5) to the Emperor of China.
Mudslinger

Have a character you used to play be proclaimed a saint and have their Saintly Bloodline running in your veins.
I am the Law

As a vassal use a favor to change a law.
Family Bliss

Have 6 close family members as friends
Zero to Hero

Found a Legendary Bloodline while part of a Warrior Lodge.
Looking East and West

Be Emperor of both Persia and Rajastan
Saxons Everywhere, Unite!

As an Anglo-Saxon or Saxon ruler, be king of both Saxony and England
The Caliphate Strikes Back

Starting in the "High Middle Ages" bookmark as the Abbasid Caliph, become independent and hold an empire title
Birthright

As the Anti-Christ/spawn of Satan, become Grandmaster of the Satanists.
Over Your Dead Body

As a Tribal ruler, gain a title you have a claim on by duelling the holder.
I Do Not Play Chess

Have 100 kills in your Kill List.
Peace in Our Time

Enforce peace for 6 or more vassals.
Empire of the Sun

Rule as Emperor with the Reformed Zun Faith
Khan of Khans

Hold any Emperor or King title as a Lombard after 1300
What Schism?

Play as a character with Wolf's Blood.
Great Indian Sultanate

Rule the Empire of Britannia as a Hindu, Buddhist or Jain character
Medieval Schlieffen

Convert Mecca to Hinduism, Buddhism or Jainism
The Black Bishop

As a Muslim King or higher, become Grandmaster of the Assassins.
Bless my Reign down in Africa

As a King or Emperor, have one of your domain Counties under the influence of a successful Rain Dance.
Let's go out into the Field

Defeat a sibling in a war using the rival casus belli.
Got Land

Start as the holder of Gotland and form the empire of Scandinavia.
Not So Bad

Kill a character with the Immortal trait.
Prodigious Five

Have at least one child with each of the five level four education traits.
Go West Young Mongol

As a steppe horde, have an independent tributary King or Emperor in the British Isles
"Never start a Land War in Asia"

Start in Western Europe and completely conquer the region of Mongolia.
Papal Mache

Have elephants trample the Pope/Caliph.
Sword to Ploughshare

Settle a steppe mercenary with more than 20 martial in your lands.
Steppe by Steppe

As a steppe horde, conquer the whole steppe region.
Nobody's Business but the Turks

As a Norse character, become King of Mongolia.
The Good Old Days

Have the kingdom of Frisia as your primary title and have the duchies of Flanders and Brabant be dejure part of it.
Black Pope

Have a priest you corrupted (as a Satanist) become Pope.
Unwelcome Visitors

As an assassin, assassinate a Crusader King in the Holy land.
Shadow Prince

Sit on the council and have every other council member as well as the ruler owing you a favor.
By Jupiter!

Reform the Hellenic faith.
Love is a Battlefield

Find love after a duel.
From the Ashes

Starting in a Shattered World, rule an Empire.
Venetian Guile

Eat a character of the Bön religion.
Sakya Trizin

Starting as the Count of Sakya in 1066, rule as an independent Buddhist King or Emperor and control all Buddhist Holy Sites.
White Hun

Starting as the last remnant of the White Huns (the Count of Mohadavasaka in 769) restore the borders of the Hephthalite Empire.
Who Needs Vasco da Gama?

Own all the silk route ports in india as a European merchant republic.
A Servant No More

As Mu’nis al-Muzaffar of Galilee in 867, become an Emperor and have at least 100 realm size.
Rise of Civilization

In a Shattered World with ‘Holding Types’ set to ‘Tribal’ or ‘Tribal & Nomadic’, adopt Feudalism or Republicanism.
Bloody Line

As a ruler with any Pagan religion, win a Christian Crusade targeting you.
Headhunter

Found a Bloodline as a particularly cunning, ruthless and skilled Duelist.
What Could Have Been

Start a Random World with all possible settings set to ‘Random’ and play for 200 years.
Not so Great

Starting in a Shattered World, defeat a Great Conqueror in a war.
Under the Power of the Eternal Heaven

As a member of the Ashina clan, solidify your divinity by ruling as Religious Head of the Reformed Tengri religion.
Lech, Czech, and Rus

Unite the Kingdoms of the three brothers, Lech, Czech and Rus, into one Slavic Union.
Heathenous Ways

Starting as Erik the Heathen in 1066, rule the Kingdom of Sweden with the reformed Germanic Faith.
L'Eglise, c'est Moi!

As an Emperor, grab the crown out of the Pope's hands and crown yourself.
History is in my Blood

Have 5 Historical Bloodlines on your character.
Deus Vult

Create the Empire of the Outremer.
Lord of the Flies

Start a Random World as a 0 year old Count, with the maximum character age set to 0, become King or Emperor within 16 years.
The Horde 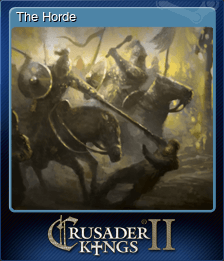 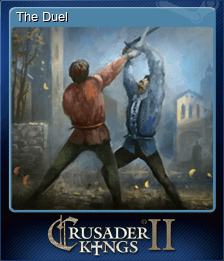 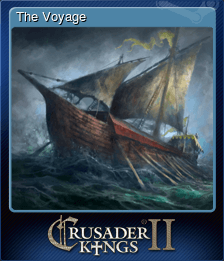 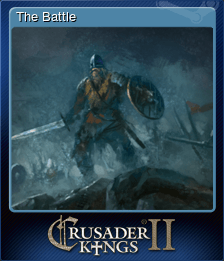 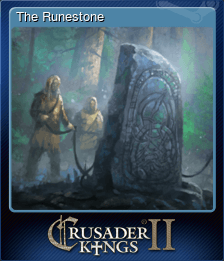 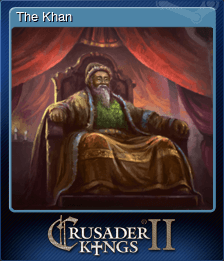 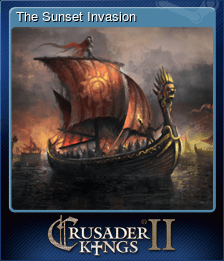 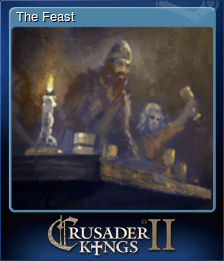