More speed. More destruction. More fun than ever before!

The most action-loaded arcade racer is back on Steam in a fully overhauled edition! Created by the original developers of the 2006 PC racing game Crashday, we proudly present the game's official re-release version: Crashday: Redline Edition!

Crashday: Redline Edition is the multiplayer arcade racer with near limitless possibilities! Race. Wreck. Shoot. Smash. Seven game modes. Battle online and offline. On roads and in arenas. Design and share your own tracks. Enjoy user-made mods, circuits and cars from Steam Workshop. Play the game the way you like. Today there are no rules.

Crashday: Redline Edition brings you everything that you love about Crashday, carefully enhanced in various meaningful ways:

Enjoy a variety of play styles such as Wrecking Match, Stunt Show or Race, as well as unique Crashday classics like Hold The Flag, Pass The Bomb or Bomb Run. Compete solo or in teams.

Build and share your own crazy circuits using the integrated track editor. Choose from over 150 building blocks, including insane ramps, wicked corkscrews, off-road terrains and a lot more.

Customize the hell out of the game! Download and play mods, cars, tracks and more from the newly integrated Steam Workshop, or create your own using the Crashday SDK. New: modded gameplay is now fully online-play compatible!

But there's more. Here's what else you get with Crashday: Redline Edition!

Get behind the wheel of urban street rides, heavy off-roaders and high-speed sports cars. Vrooom!

Blast your enemies into pieces with missiles and mini-gun firepower.

Real-time deformation. Just because it's so much fun to destroy things! :)

All-new in Redline Edition! Grab ammo refill, instant-repair and more right from the tracks. The perfect enhancement for online battles.

View the most spectacular scenes over and over.

Race against up to 8 friends in online matches, both VS-style or in teams.

Set up matches just the way you want and race against AI.

Rise to fame as a driver in the Crashday underground league and unlock cars and tuning parts as you progress.

We have crushed more than 100 bugs (oops!) from the original game.

Last but not least: all of the classic music tracks from Crashday, including the unforgettable Pencilcase, Lowbuz, Peter Struck and more!

The classic arena deathmatch: destroy or be destroyed! Any more questions?

Amaze the audience by performing stunts, jumps and roll-over with your car. The freakier your show, the more points you get.

Be the first to cross the finish line. With or without weaponry distraction.

Grab an awkwardly large smiley (why not a flag?) from your enemies and take it through the checkpoints to score and win.

A bomb on your car is armed, and the timer is running. Now quick! Pass on the bomb to your “friends” before it blows up.

Never drive slower than a certain speed, or a bomb in your car blows up! The evil deal: every time you pass a checkpoint, the minimum speed increases!

Roam freely around your tracks without any limitations.

Starting as a hobby project of two 14-year-olds in 1998, Robert Clemens and Jan Bodenstein developed a vision for their game of dreams: Crashday – a game that would combine elements of their back-then favourites Carmageddon (1996) and Stunts (1990). In a time long before indie games became a normal thing, the duo taught themselves about programming and creating game art to make their vision come true. Developer Moonbyte Studios was born.

Fast-forward eight years, the PC racing game actually hit the shelves in early 2006 – completed with the help of development partner Replay Studios, and distributed by then-publisher Atari. Long overdue and far more complex than in the developers' wildest dreams, the game saw a positive reception amongst players worldwide. Crashday quickly built up a community of passionate online players, track builders, and enthusiastic modders. Last but not least due to extensive modding capabilities, the game had eventually survived far longer than anyone had expected.

2017. Already past its tenth anniversary and driven by tremendous support from a few still-active Crashday players and fans, Moonbyte decided to bring their “baby” back to Steam. Nowadays, in a fully digital landscape, the way community-driven online games are played and shared has changed – perfect conditions for a game like Crashday, and surely the ideal opportunity to pay tribute to the fans by making use of new technology and distribution channels while staying true to its roots. This is Crashday: Redline Edition.

add to wishlist
First win of the day!

Complete the intro mission without the use of mods
Too much money ain't a bad thing!

Play for one hour
Bullets 1

Make a single combo of 25.000 points
Dev VS Community

Convince a developer to unlock this achievement for everyone
Gold stunt!

Win the first multiplayer match
How the artist was born

Create your first track
You owe me respect

Earn 5000 respect points without the use of mods
Endmission

Beat the incubator without the use of mods, to prove who is the best of the best.
Flying Like The Hawks

Fly for at least 10 seconds
Around the world.

Hit 1.000 times with the missiles
Champion!

Wreck 20 police cars in the Survival minigame without the use of mods
Professional!

Play with a dev
Apachee 220X 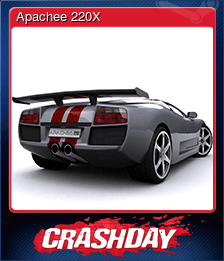 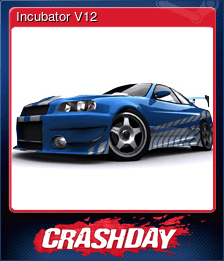 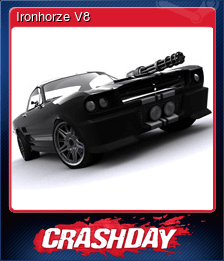 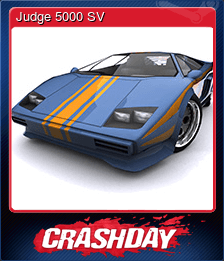 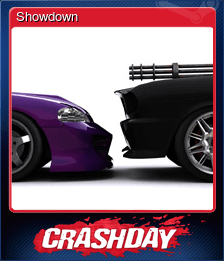 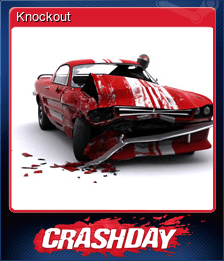 From Wrecker with love 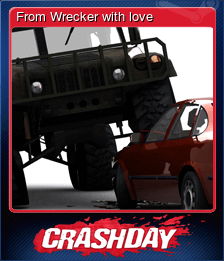