Imagine You are the General, and You control large Armies.
You see a big Tank, Driving across a paved road in a City.
Some houses stands along the road.

You can hear the Tank engine sound change, as it turns to face an enemy.
You hear a click-click sound from an enemy cockroach as it moves closer.
A big noise comes from the Gun on the tanks, as It fires on the enemy.

You can feel the mouse in Your one hand, and the Keyboard under the other hands.
The chair supports your body, and Now You Can become the General.

"Have You ever Want to be a General.?"
The poster for the recruitment center asked.

Here and now, You Can become the Battlefield General.
Imagine building your own Unique Armies and Controlling the way they attack.

Each Battle is exciting and challenging because of the different AIs.
And there are LeaderBoards showing, Who is the Top General.

Control large armies in this Real Time Strategy game, with a touch of RISK.

You need to Build a Base, that can defend against the Enemies attacks.
You can build up Your Army, Behind your walls, setting them of for One Massive Attack.
Or You can send out small Quick Strike Teams.
You Choose, if it should be Fast Moving or Hard Hitting, Because You are The General, in This Game.

Discover the Enemies HQ, and bring Your Armies into Striking Distance,
and Destroy The Evil Infestation.
Just to Reveal the Hidden Truth, behind the 3rd Invasion.

The Storm is About to break.
The Enemy are ready, are You.?


These are the Units, that are under your command. 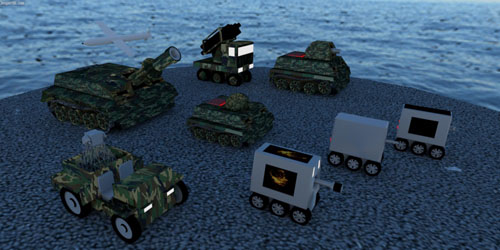 The Story so fare

The storm is about to break.
But we don't know what it is or where it is from...

The 1st Invasion was the Zombie Plage.
The Zombie Killing Cyborgs from 1st Core, tried to hold them back.
The 2nd Invasion was the Undead Awaken.
The Wizards from the 2nd Circle, nearly fought them to a stand still.

But both invasion was not from Earth...

Now our Armies are starting to work together. They are fighting back the First and the Second Invasion, but we know something else is coming.

Each time just before an Invasion started we had problems with radars all over the world.
Sometimes they go offline for an hour, sometimes they burned out.
And every time a Zombie plague hits or the Undead Awakes 10 days after.

This time we might be ready, because the radar just went offline.
And we started an airlift, into the area...

Now You have to Fight.
Fight to become the Savior of the Earth.

Meet the Zombies for the first time
Play for 15 Minutes

Fight the Plant for the First time
First Alien Battle

Fight the Aliens for the First Time
Win Your First Battle

Win Any Battle
Play for 30 Minutes

Contiunal play for 1 Hour
Kill 100 in a battle

Look at the LeaderBoard...
Destroy the Plant

Kill All the Areas With Plants
Destroy The Aliens

Defeat All the Areas with Aliens
20 Battle Medal

Find the Alien Base
Have 1 Million Dollars in a Battle

Having Money is important.