3
Out of stock
uPlay

EXCLUSIVE DUNGEON: THE DREAM SHARD
Explore the Dream Shard dungeon and pursue your quests in the Agyn Peninsula!

FIRST DLC FOR FREE: THE FALCON AND THE UNICORN
Deluxe Edition owners will get to enjoy the game’s very first DLC called the Falcon and the Unicorn for free when it releases.

DIGITAL SOUNDTRACK
Get the official Might & Magic X – Legacy digital soundtrack and listen to thirteen unique compositions from the acclaimed duo of composers, Roc Chen and Jason Graves. 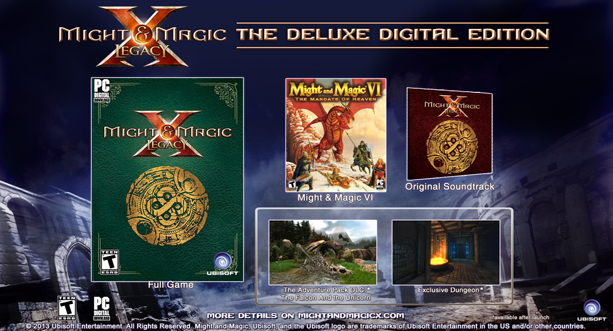 After a decade, a Might & Magic® RPG is back with both the unique core formula and a new set of improved and fine-tuned features. The best RPG of its class!

In the wake of the spectacular events in Might & Magic® Heroes® VI, you will play in a party of four adventurers entangled in intrigue and political machinations unfolding in and around Karthal. The city, on the verge of secession, is prey to competing factions vying for its control. Your actions will determine the fate of the city.

Might & Magic® X Legacy is an authentic solo experience in the classic first-person RPG genre. Create and lead your group into an exciting open world and battle mythical powerful creatures while collecting ancient magical treasures!

Rediscover the mythic Might & Magic role-playing series, updated for a new generation in Might & Magic X - Legacy. Experience a gripping four-act story that will test your tactics and judgement.

MODDING KIT
Create your own map and mods to express yourself, design the game you want to play and share your creative vision with the Might & Magic X – Legacy community!