Items included in this package

Upgrade from Hero Edition or Champion Edition to Royal Edition and unlock the following content: 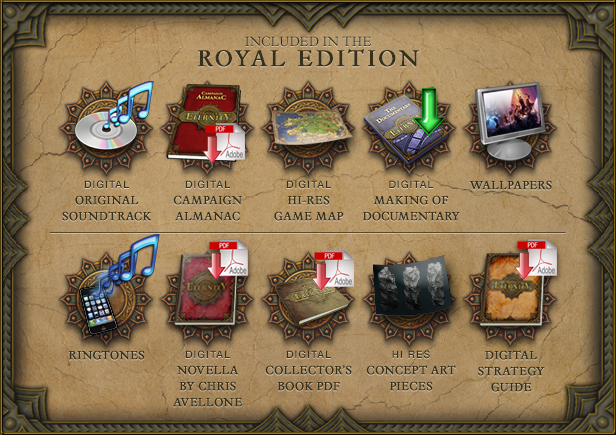 Digital Novella by Chris Avellone:
A digital novella that focus on the backstory of some of the more interesting characters that players may encounter over the course of their travels in Pillars of Eternity.

Collector’s Book PDF:
Digital version of the book that is being published by Dark Horse. It contains lots of information and art on the setting, story, and creatures of Pillars of Eternity. 112 pages.

Hi-res Concept Art pieces:
High resolution pieces of our concept art. Contains everything from concepts of areas and creatures to props and mood pieces.

Digital Strategy Guide:
Digital version of our strategy guide from Prima penned by the same writer of the Fallout: New Vegas guide. Contains all the information players will need to master Pillars of Eternity and reveal all of the content available.

Pillars of Eternity: The White March - Part I

is a large sprawling expansion pack with hours of gameplay integrated into the main adventure. Along with the new quests and area content, the team at Obsidian continues to support and make improvements to the entire game, including the additions of Player Party AI and Enhanced Enemy AI. Even if you haven't played Pillars of Eternity, now is a great time to jump in and experience the hardcore classic RPG with The White March - Part I.

Pillars of Eternity -The White March Part II is the conclusion to the grand expansion pack for Obsidian’s critically acclaimed RPG, Pillars of Eternity. Returning to the frozen north, your party will learn additional secrets about the gods of Eora as they adventure through brand new content. With the aid of a new companion, your party will face challenging new enemies and bosses.