NOTE: THis game will redeem in eu regions only 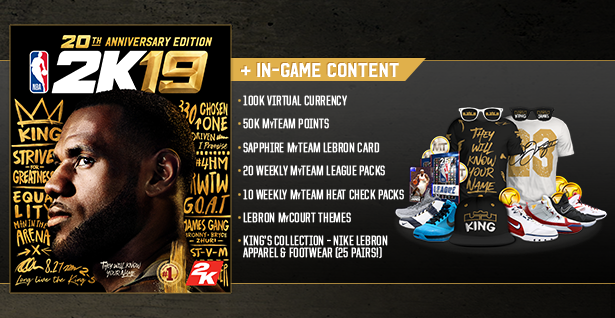 NBA 2K celebrates 20 years of redefining what sports gaming can be, from best in class graphics & gameplay to groundbreaking game modes and an immersive open-world “Neighborhood.” NBA 2K19 continues to push limits as it brings gaming one step closer to real-life basketball excitement and culture.

Harness your MyPLAYER’s full basketball potential with the new Takeover feature. Unlock special moves and abilities never before seen on the court, or activate Team Takeover and unleash the power of your full squad.

You won’t want to miss a single day in the updated Neighborhood. Make a name for yourself on the court, at the Under Armour Cages, and during live events on the block. Ball until dawn with new day to night transitions, walk on at the Jordan Rec Center, or get the old Crew back together for exciting 3 on 3 streetball action.

Create your very first MyPLAYER card, and ball with LeBron, Kobe, and the rest of your collection in a variety of competitive modes. Introducing the new Unlimited mode, allowing you to pick any five cards from your deck without restrictions and battle against other players online.

From neighborhood legend to global phenomenon. The original career story mode returns with an all-new, immersive narrative charting your journey from China to the G League and eventually the NBA. Featuring an all-star cast, endorsements tied to your popularity, and new team chemistry elements that allow you to dominate the hardwood

Get 5 Green Release makes in a single game.
Badge of Honor

Earn a badge in MyCAREER.
Take Over

Make an on-the-fly defensive coaching adjustment during a game.
Puttin' In Work

Have two consecutive breakout games in the NBA in MyCAREER.
My Every Day Player

Become a starter in the NBA in MyCAREER.
A Little Something Extra

Get a haircut from the Barber Shop in MyCAREER.
I Spy Spalding

Find the Spalding IQ equipment in the team practice facility in MyCAREER.
Badge of Extreme Honor

Level up a badge to Gold in MyCAREER.
Rat-A-Tat-Tat

Get a tattoo from the Tattoo Shop in MyCAREER.
My All-Star

Be named an NBA All-Star in MyCAREER.
We Need Some Stinking Badges

Use the Mentor / Mentee system to help a player learn a badge in MyLEAGUE.
Money, Whenever You Need It

Tested out the jerseys with the street ballers in MyGM.
Draft, Schmaft

Win the Rookie of the Year award in MyCAREER.
More Loot!

Use your Tokens to acquire a player in MyTEAM
Tex, We Have a Problem

The media caught wind of the leaked information in MyGM.
Grindin' Away

Achieve an overall rating of 90 in MyCAREER.
Gimme A Boost

Purchase a skill boost at the Newsstand in MyCAREER.
Great Kid, Don't Get Cocky

Defeat a division in Triple Threat in MyTEAM.
Drop It!

Play a game with two players who form a duo in MyTEAM.
Puts The Fly In On-The-Fly

Complete 3 Daily Trials in a single day in MyTEAM.
Capped Out

Max out all of your badges in MyCAREER.
Get Your Feet Wet

Acquire a Signature Player in MyTEAM.
We The People

Join or Own a Crew.
Thrill By Association

Create or join a MyLEAGUE Online league.
Rattle On

Play a game in the Cages in the Neighborhood in MyCAREER.
Served Cold

Beat Andrew in the Summer League in MyGM.
No 'I' In Team

Join or Own a 2K Pro-Am Team.
Marathon Man

Run 26.2 miles in the Neighborhood in MyCAREER.
You Do Know Jack

Correctly answer a trivia question in the Neighborhood in MyCAREER.
Didn't Mean No Harm, George

The leak was ousted before the scouting report was revealed in MyGM.
Undefeated

Go undefeated in Unlimited in MyTEAM.
Never Tell Me The Odds!

Acquire a Numbered Player in MyTEAM.
My House, My Rules

Win a game of Strikeout in your MyCOURT in MyCAREER.
Infinity

Collect one of each Gem Color Player Card in MyTEAM.
The 5 D's

Win a round of Dodgeball in the Neighborhood in MyCAREER.
Ride It Where I Like

Ride a Bike in the Neighborhood in MyCAREER.
You Been Working Out?

Use every piece of gym equipment in MyCAREER.
On The Rise

Win as a member of a Pro-Level or higher 2K Pro-Am team.
Inception

Play a game of NBA 2K19 in your MyCOURT.
Perfection

Win all 10 games of 'Greatest of All-Time' in Play Now Online.
Locked In

Earn a Call-Up after winning a ‘Player Control’ game in Play Now Online.
A New Beginning

Completed the story, unlocked the best ending and became part owner with Tex in MyGM.
The Rest Is History