Once upon a time the world was flat.

The Old Stoics kept the world whole, and kept their magic out of the hands of mankind. Hence came the Pirate King, who found those with evil hearts willing to share the arcane knowledge. With legions by his side, he fought the Old Stoics and destroyed them all.

It was then the world began to fail.

Airship Asunder gives you command of a steampunk airship, tasked with building settlements and seeking your fortune among the ruins of a dying land. Will you stand above the chaos and save what remains of our precious flat earth, or will it be torn asunder?

Captain your vessel and fly the skies of adventure! Establish new colonies, build mighty empires, search for ancient relics, use powerful magic spells and battle evil forces on your quest to defeat the Pirate King!

Taking game play and visual inspiration from the exploration and adventure of classic games such as Seven Cities of Gold, Ultima IV, Civilization, M.U.L.E. and Intellivision’s Utopia, Airship Asunder mixes a blend of retro-style graphics into a single palette, with a nod to the nostalgic days of adventure gaming.

Grow a camp into a village.
Orchardist

Use a rusty key to open a vault.
Prospector

Build a mine.
Abracadabra

Grow a village into a town.
Director

Use a skeleton key to open ancient ruins.
Ghost Hunter

Board a Cruiser.
Headmaster

Grow a town into a city.
Principal

Deliver the final blow to a Dragon.
Spirit Guardians

Search one of the four sacred locations.
Ensuant

Board an Abolition.
Fundament

Board a Fundament.
Final Victory

Board an Argantion.
High Roller

Win the gambling jackpot with a 1000 gold bet.
Nexus

Build a dynamo on the mana resource center.
Motherlode

Build a mine on the gold resource center.
Exron

Build a refinery on the fuel resource center.
Bountiful

Build a nursery on the food resource center.
Metropolis

Achieve a population of 1000 in a city.
Fatal Strike

Deliver the final blow to the Pirate King.
Meridion Ensuant 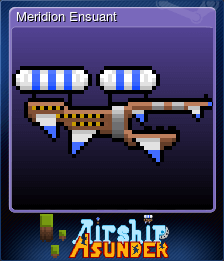 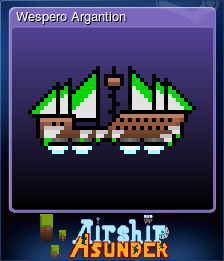 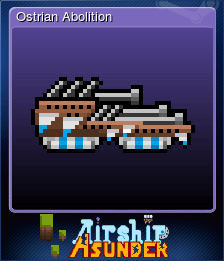 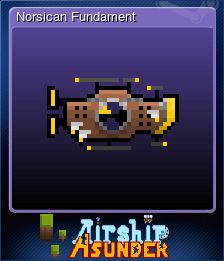 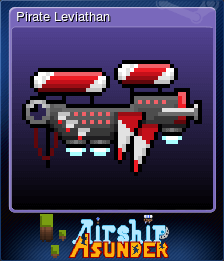