STRAFE® is a roguelike first-person shooter that generates unique, full levels every time you play. Hand-crafted rooms are randomly linked together and filled with a fresh buffet of hungry enemies, so every run provides a new bloody challenge as you seamlessly slaughter your way through 4 diverse locations in unknown deep space. With secrets hidden around every corner and plenty of mechanics to discover, the tutorial is just the start — so explore & experiment often!

PERMANENT DAMAGE AND GIBS! ÜBER-GORE technology means enemies explode with fountains of blood, which never fades away. Create wicked works of death art that mark your explored territory from the unventured.

FACE MELTING SPEED! The blazing fast action will hit you like the blast wave of a 50 megaton thermonuclear warhead, liquefying your skin cells and rupturing your internal organs. Yet still leave you coming back for more.

As a Scrapper on a impossibly dangerous mission at the edge of the galaxy, you only have one life to navigate all the nightmarish terrains of STRAFE®. When you die, nothing will ever be the same again.

+ Four unique zones (three levels each) that demand different death-defying gameplay styles
+ Gun upgrades that turn your average tool of death into an outright murder machine
+ 30+ insane weapons
+ 20+ blood-thirsty enemies
+ Some of the most unique secrets in gaming!
+ The sickest soundtrack of 1996 and at least the next 25 years
+ Unsigned 32 bit colors!
+ Lifelike digital gravity
+ Colored lighting!
+ STRAFE®!

+CAMPAIGN - The core experience is a single player roguelike FPS adventure filled with secrets.
+STRAFE ZONE - A leaderboard based daily challenge. You have one attempt to get the high score each day, can you do it?
+SPEED ZONE - A leaderboard based weekly challenge. You have a week to run a locked level seed as many times as you want and try to shave your time down but you have to kill 90% of the enemies in the level before you can cross the finish line.
+MURDER ZONE - Can you survive 10 rooms of slaughter? Unlock new tools between attempts to become ruthlessly efficient.

WHAT STRAFE® IS NOT

We don't want you to buy STRAFE® if it's not a game you'd enjoy. We'd rather have a happy non-customer than an unhappy customer. This is what STRAFE® isn't:


+ STRAFE® is not a traditional shooter or a "Quake Clone"  - STRAFE® pays homage to many classic shooters, and it features many of the classic elements of old school shooters but STRAFE® is a roguelike. This means that it was designed from the ground up for replayability and randomization. Every room in STRAFE® was designed by hand and is seamlessly connected by our level generator to create unique experiences.

+ STRAFE® does not have lives or checkpoints - As a roguelike, if you die in STRAFE® you will start at the beginning of the game and everything will randomize. The game is balanced around this idea to avoid frustration.

+ STRAFE® is not a multiplayer game - There is no multiplayer deathmatch or co-op in STRAFE®. But we recommend Quake Live if you are looking for a great old school arena shooter.

+ STRAFE® is not limited to the design decisions of 1996 - What can I say? We are ahead of our time. STRAFE® is a mix of old and new design. We didn't want to not imitate the games of the past but instead invoke the feeling of them while bringing fresh ideas to the table. We aim to bring you something new with STRAFE®.

+ STRAFE® tries new things with the roguelike FPS formula - We aim to generate full levels that feel more natural to explore and avoid patterns of rooms that lock you in, teleport in enemies and force you to kill them before the doors unlock. We want STRAFE® to feel like a seamless adventure from start to finish.

+ STRAFE® is not a game that will run well on older computers or laptops - STRAFE® may look older but it's a new game and features some cutting edge tech. Please check the min spec!


STRAFE® may look like a game you've played but we've worked hard to create a unique and fresh take on first person shooters, we hope you enjoy it!

add to wishlist
WALKIN' ON THE SUN

Play the MURDERZONE
CAN'T GET ENOUGH OF YOU, BABY

Beat 10 jumps in the tutorial
HOME

Survive the Burbs
ALL STAR

Beat STRAFE®
BACK AT YA

Get a reflect kill with wrench
FEAR OF FLYING

(Secret achievement)
WHY CAN'T WE BE FRIENDS?

Fix the Black Canyon teleporter
HALF WAY THERE

Beat the game with the machinegun
TYRANT

Beat the game with the shotgun
VMMMM-PHT

Beat the game with the railgun
MR. FIX-IT

(Secret achievement)
THAT WAS REALLY DUMB...

Beat a level ONLY strafing
KILLED THE PAST

Get a kill while riding a harvester
SHHHHHH

Beat the game without obtaining health or shields
STRADDICTED®

Get all achievements
GLUTTON 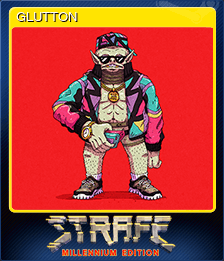 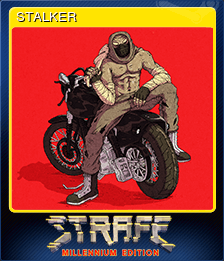 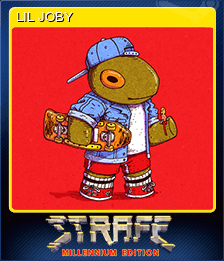 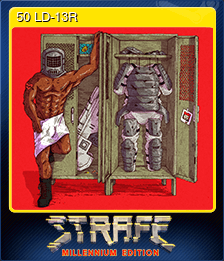 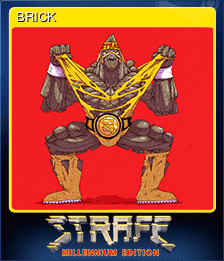