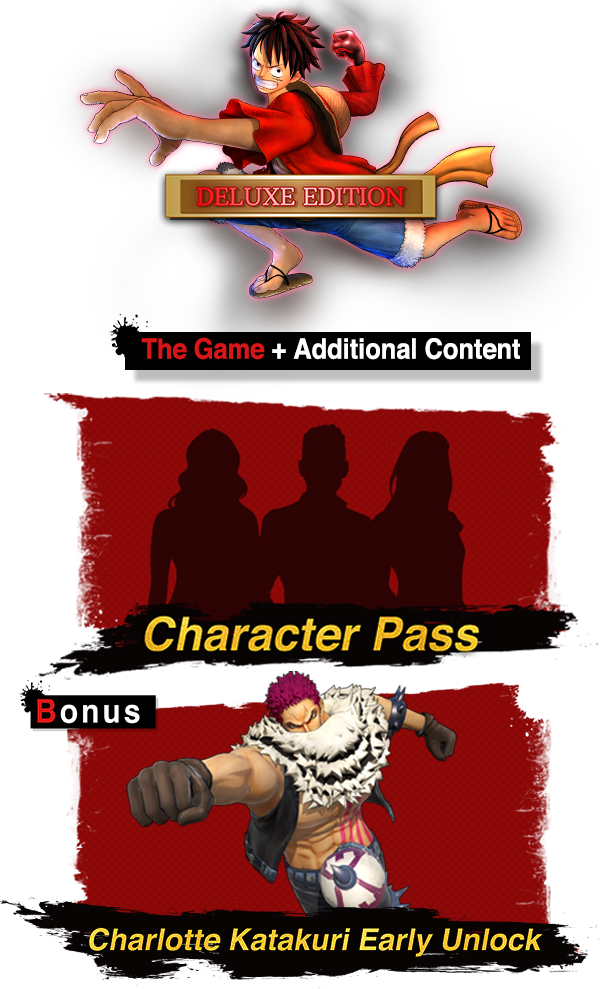 The Deluxe Edition includes the following:
- Full Game
- Character Pass which includes 9 characters and the Charlotte Katakuri Early Unlock as a bonus

The Pirate Warriors are back and bring with them a more explosive story, more environments and even crazier attacks in ONE PIECE: PIRATE WARRIORS 4.

Choose from some of your favorite characters and take on a vast number of enemies through iconic moments from the One Piece anime.

The PIRATE WARRIORS series has successfully combined the popular anime ONE PIECE with the thrilling action of the WARRIORS series to create a worldwide phenomenon selling more than four million copies!

Based on the concept of "fighting hordes of enemies while adventuring with trusted allies," experience awesome ONE PIECE action lifted straight from the anime!

ONE PIECE: PIRATE WARRIORS 4 is the latest evolution of PIRATE WARRIORS action! Based on the concept of "experiencing a real ONE PIECE battlefield," buildings will come crashing down during the action and attacks will throw up smoke and dust, placing you in the thick of the ONE PIECE world!

Injecting fresh elements that couldn't be achieved in previous entries has now realized an even more thrilling brand of PIRATE WARRIORS action!

add to wishlist
I'm Getting Fired Up...!

You defeated your first enemy while in Form Change.
Lightning Speed

Unlocked at least 25% of the Gallery
Push On Through!

One character's Action Growth Level has MAXED out
Adventures at Daybreak

Acquired all the islands from
A New Dawn

One character's special moves have all MAXED out
The Strongest Creature

20 or more characters’ Crew Levels have MAXED out
The Name of that Sea is...