Gaming in Japan - How does it compare?
Recently, a few OP staff members took a trip to Japan for 11 days. It was meant to be time away from work, time away from our normal routine, but with the massive gaming industry in Japan, it was impossible not to collect pictures of our experiences in this amazing country. I want to share my opinions with OP members about what it feels like to be a gamer in Japan. 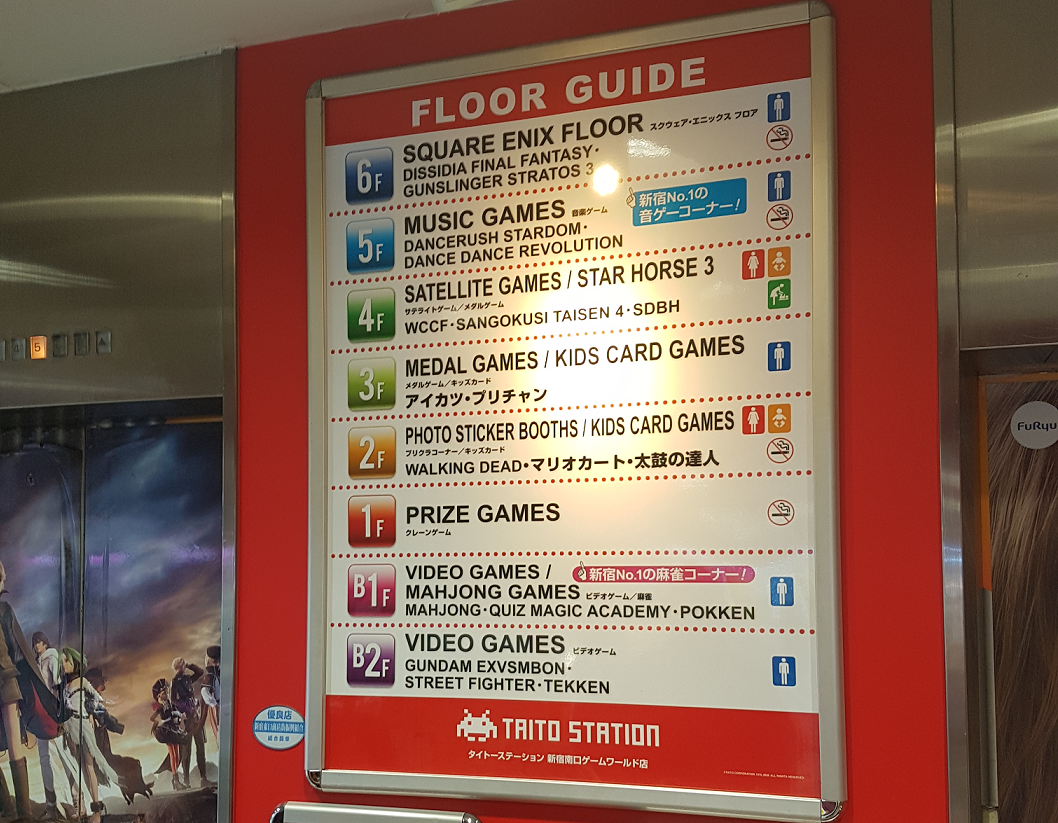 The first floor is almost always grabber/prize games, I personally wasn't impressed by the prizes available most of the time. The prizes varied with plushies, figures from popular Japanese television shows, and even boxes of snacks (one even had a prize of dried octopus tentacles!). Each prize game normally cost 100 yen (currently around $0.91/£0.69/€0.78). They have perfected that "I am so close, just one more go and i'll get it" feeling you get from grabber machines. I must have put around 7000 yen into them machines in total and left every time with absolutely nothing. Holly however, was on a winning streak and managed to win a total of 3 prizes (see middle image below). 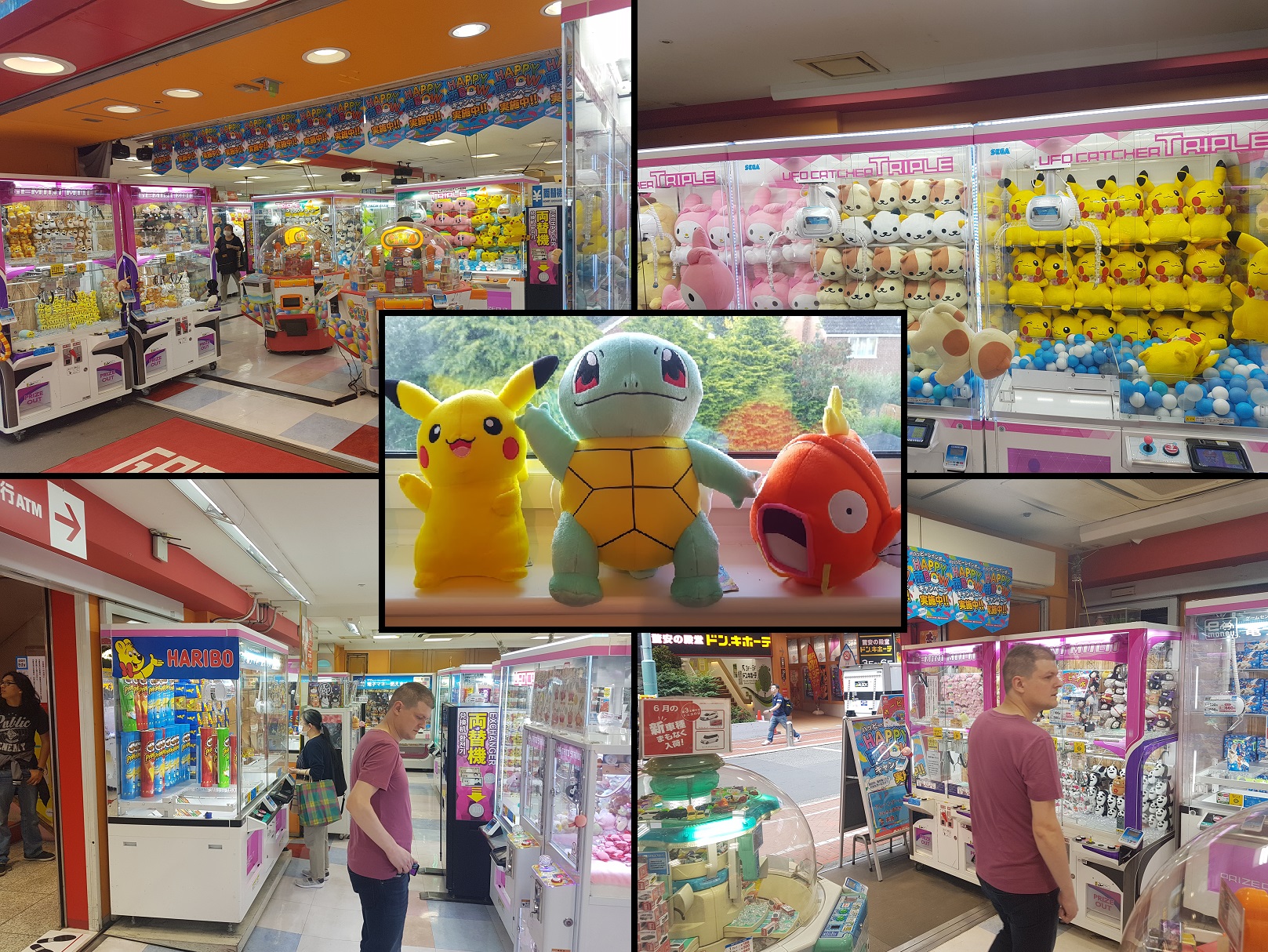 The next floor was for "photo sticker booths" and kids card games. The photo booths were something I have never seen in any local arcades, it appears to be almost like a passport photo booth, but with the ability to have multiple people inside, choose various effects and backdrops, and print off stickers.

The third floor was for "medal" games. Chris and I became very excited when we saw this floor and spend the next hour or two swapping our cash for tokens and god damn was we smashing it. We had two buckets of tokens and keen to hand them in for either prizes or a cash return! Little did we know, that gambling is completely banned in Japan, including penny pusher type machines. Their way around this is to allow you to use tokens, which can only be used in other token machines and cannot be transferred for anything you might consider useful. It gives people the thrill of gambling, without any serious financial risk. We wondered why we were winning so much... 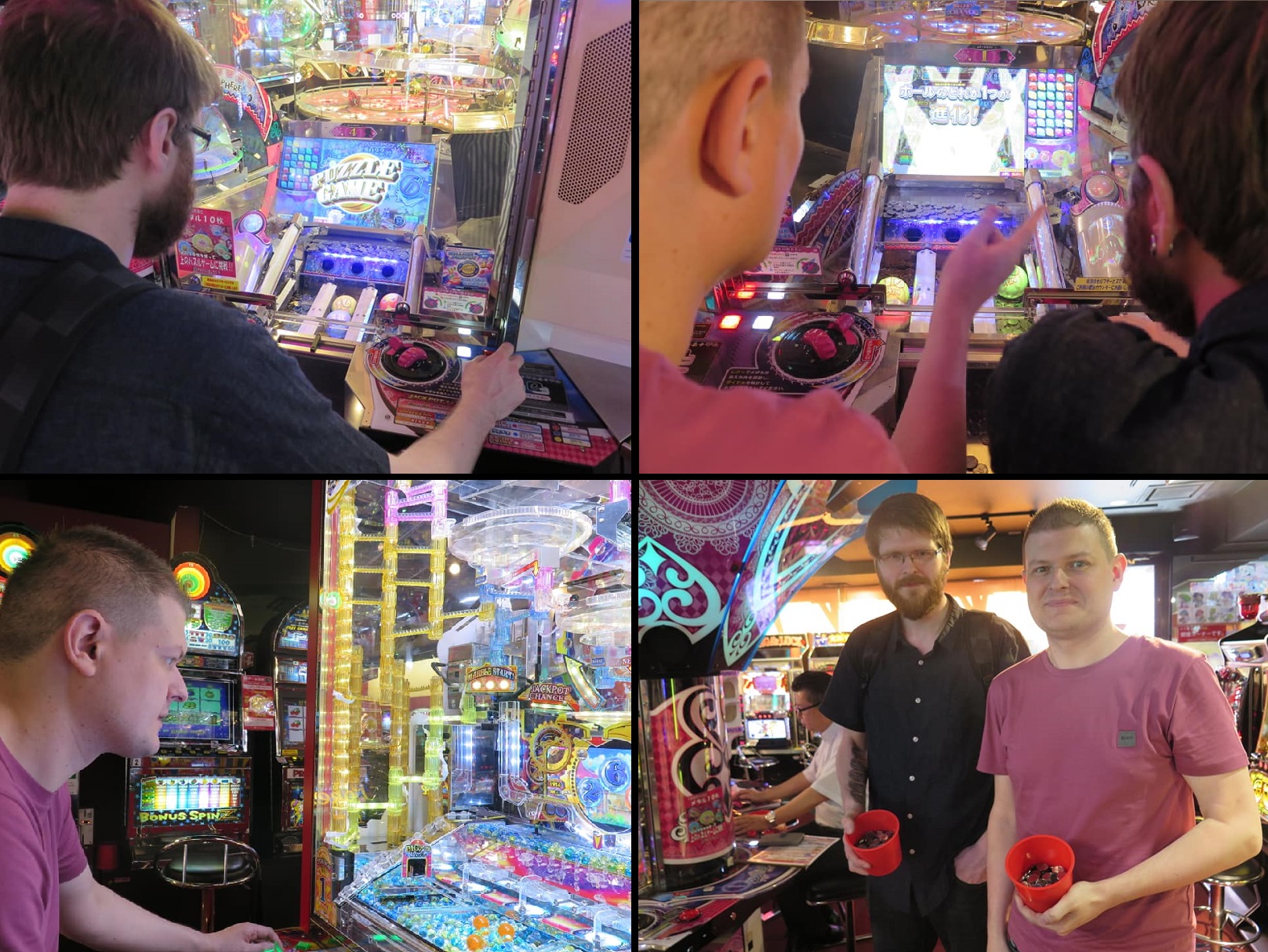 Floor four contained "satellite games" which appeared to be card like games. It looked like you used physical cards on a screen to battle opponents. It was hard to make out exactly how it worked and was impossible to play due to it all being in Japanese, so we swiftly moved onto the next floor.

One floor I was really excited to get to was music/rhythm games floor, and this is an area where the Japanese absolutely thrive. The variety of games are out of this world, and the skills of the locals are unreal, almost god-like. From drums, to guitars, to DJ sets, to dancing, to general button smashing games, they had it all. 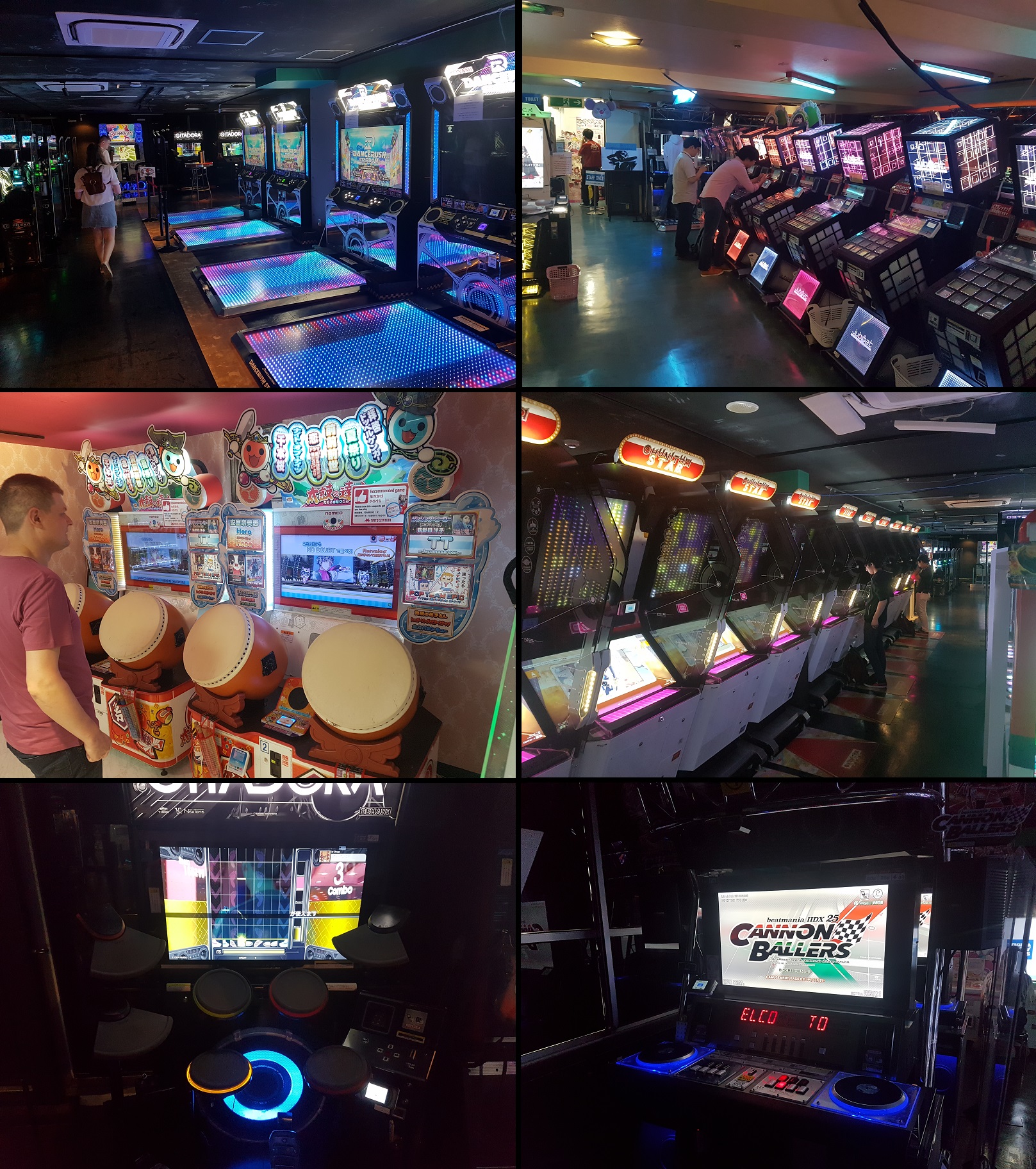 The games on this floor were taken very seriously. You'd see people coming into the arcade after a hard day at the office, still wearing their smart and stylish suits. They would walk up to their favourite machine, undo their collar, slip on their professional playing gloves, apply the headband, and start tapping into the night. You just knew they had pumped thousands of hours into these machines, perfecting each song. Occasionally you would even see them taking pictures of their high scores as a bragging rights currency to spend when with fellow gamers and competitors. Even a game as simple as Tetris, they managed to perfect on the hardest difficulty, with the control of the game almost rhythmic in nature. I couldn't help but stand and watch someone completely mastering a game I find challenging on even average difficulties.

The final floor in this arcade had a few more games you'd generally see at an arcade, a few shooting, and general arcade games. The basement floors had a ton of mahjong games (not really interested) and a few more general arcade games. This place felt huge as if we found one of the best arcades on day one. Little did we know, almost all arcades were this big and this good, if not bigger and better.Much like myself, the Japanese are really interested in VR and seem determined to integrate it into their arcades. Some arcades had a floor just for VR games/experiences, and these were normally not just your average VR game that you could play at home. They included multiplayer shooters, horse riding games (which were strangely convincing), zombie horde VR, and much more! A lot of the games you have to book in advance, but we managed to play two VR games during our time here without having to book! 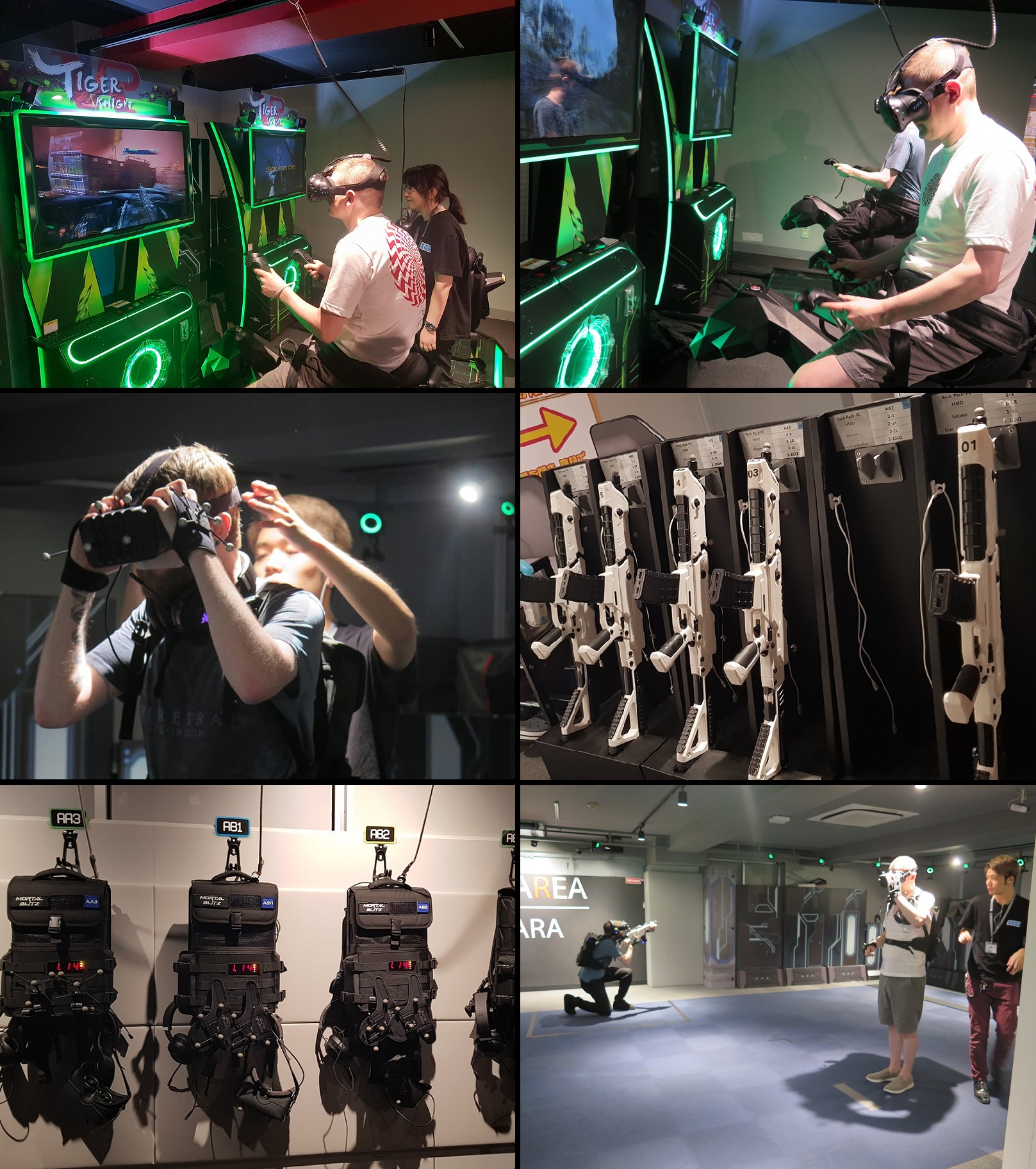 One of the most amazing arcades we visited, was one called the Kawasaki Warehouse, it's a 5 story arcade designed to look like the Kowloon walled city in Hong Kong, an ungoverned and densely populated settlement notorious for it's crime, prostitution, and drug abuse. The arcade didn't have any games that other arcades didn't, but the atmosphere was overwhelming. It was an extremely cool place to hang out and even if you didn't play any games, you could have an awesome time just exploring and looking at the detail put into the place. If you're a gamer and going to Japan, I couldn't recommend this place more. 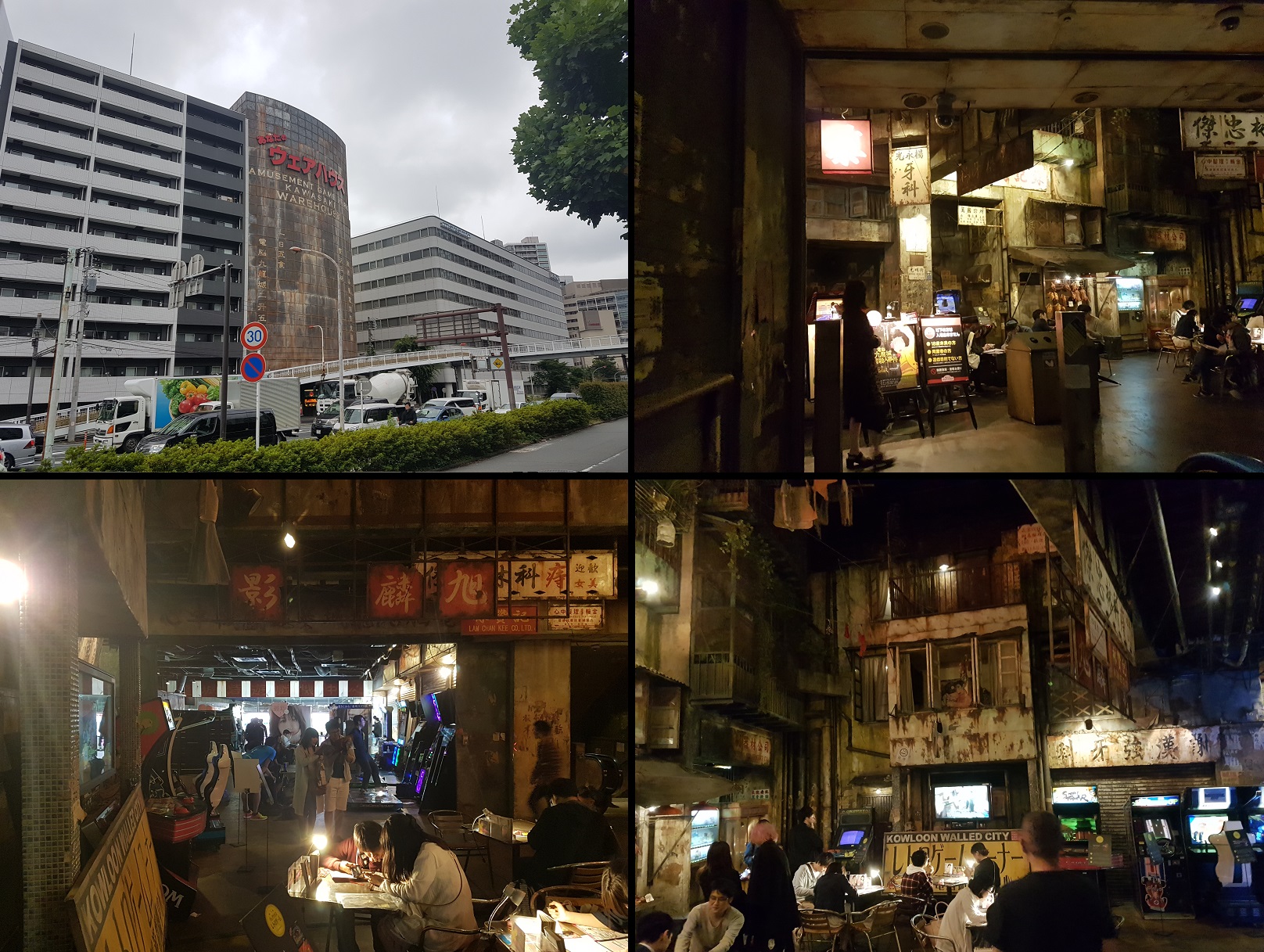 Japan isn't just amazing for their vast array of arcades, but also their gaming focused shopping environments. One chain of stores that grabbed our eye is Super Potato. This store has everything you could ever imagine when it comes to retro games and consoles, and at very reasonable prices. It was overwhelming how much stock they had in fantastic condition and often even boxed! It was like a dream walking through this shop and on one of their floors they even had some retro arcade games to play! 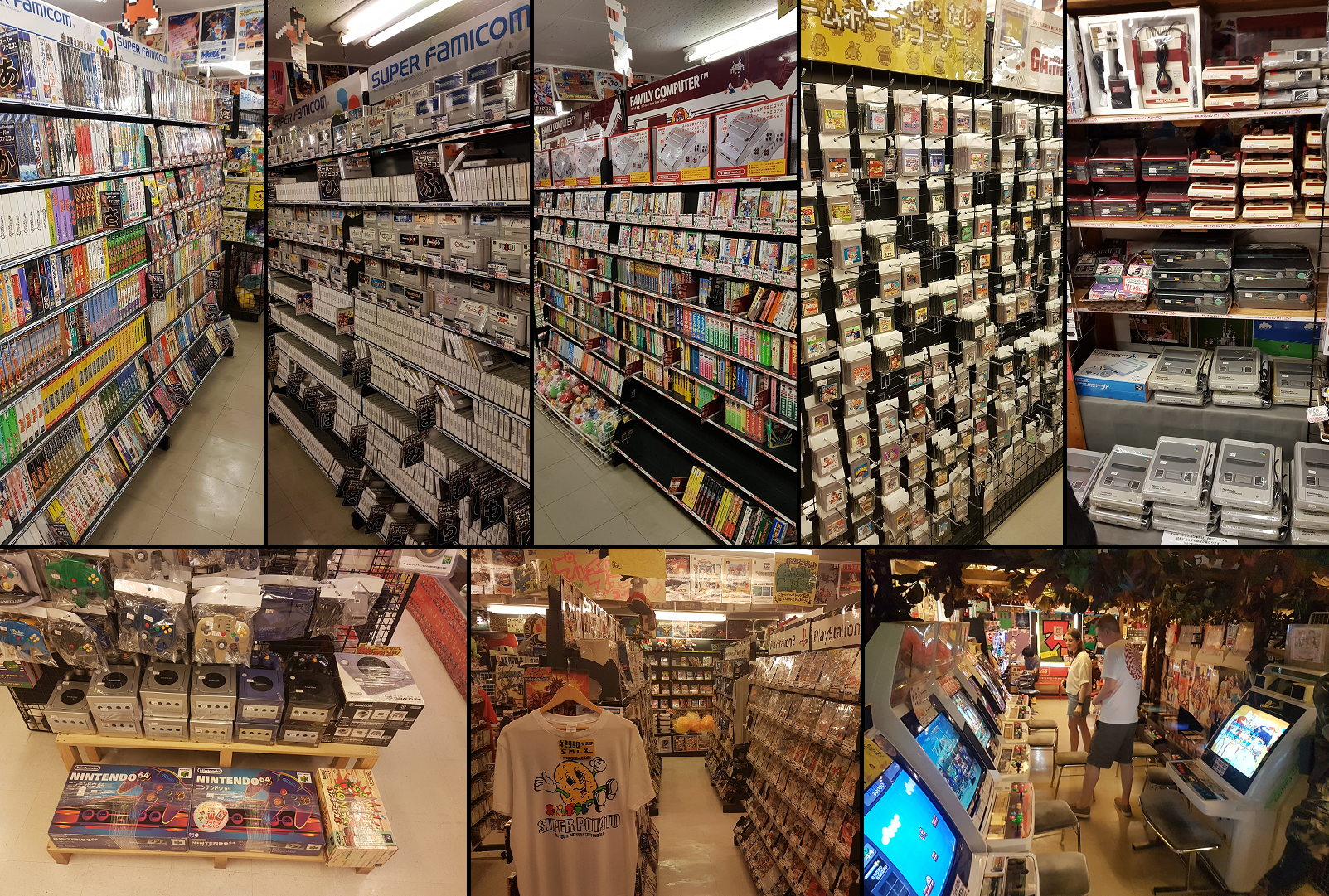 If you're not interested in retro gaming, there is also plenty of shopping experiences for more modern gaming hardware. In fact, their technology stores are so large it can often be challenging to find exactly what you are interested in! Two that we explored were Yodobashi Camera and Bic Camera. Like most large stores in Japan, these consist of multiple floors, each dedicated to a certain genre of technology. After a considerable amount of time spent exploring, we managed to find a gaming section that made us all hot and flustered. The prices are nothing special in these large stores and are much better in smaller independent shops, however, in order to get a better price you are expected to haggle. 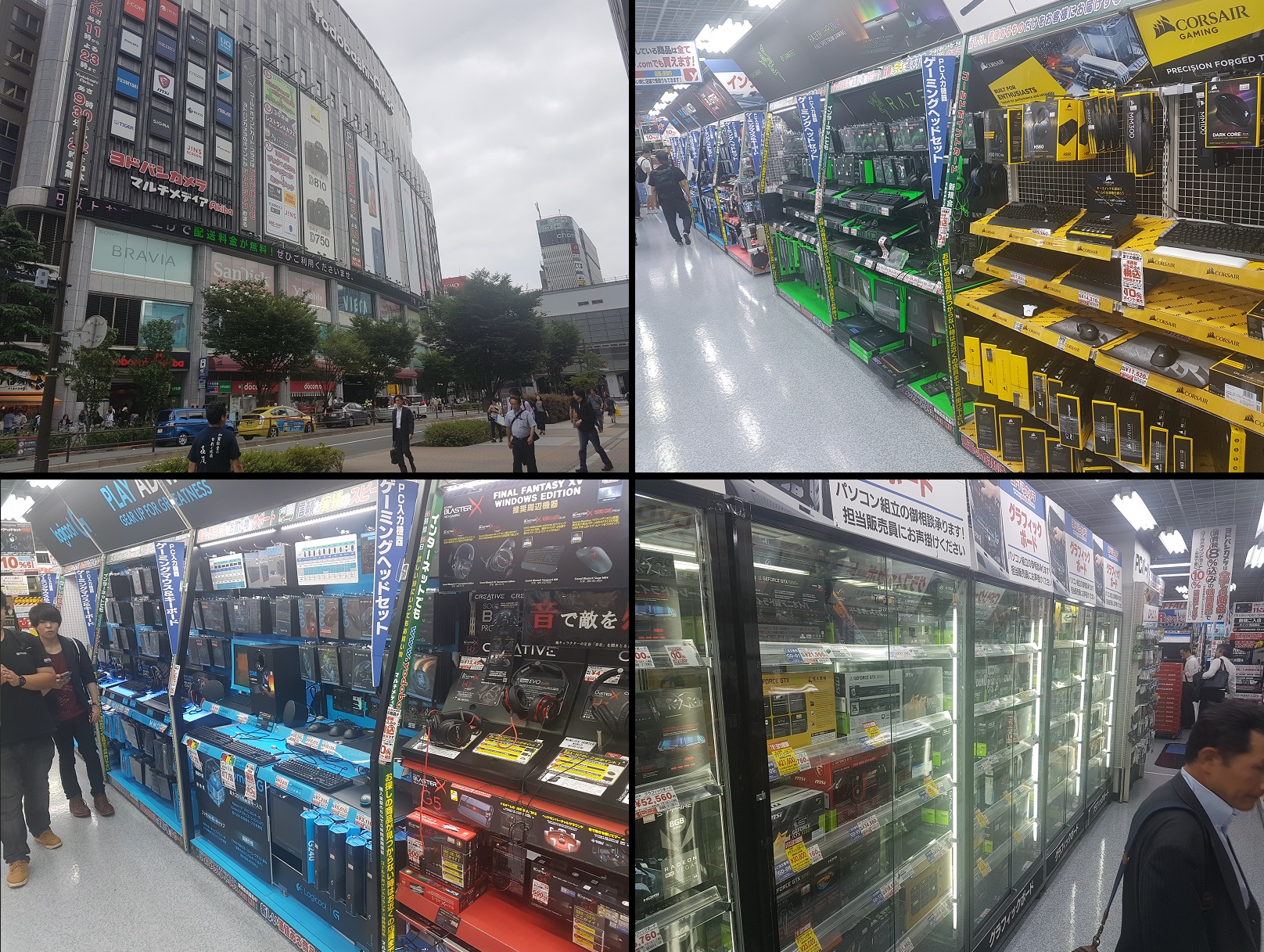 On our last day, we were struggling to decide where to spend it. We eventually decided on an area with 4 different humungous shopping centers, almost side by side. In one of them, we found the most magical place. It was an arcade, and I'm sure you're sick of hearing about arcades by now but listen up! This one is different. It's a completely retro-themed arcade with all the original arcade machines to match. The pinball machines were a refreshing step back to simpler times with the flashing lights, fun noises, and tiny parts dancing together, all stimulating your basic sensory instincts resulting in surges of dopamine with every ricochet of the ball. Just a few steps away, there was even a retro candy store. It quite literally felt like time travel. We got completely lost in this gift from God and almost ended up missing our book-in time at the capsule hotel! 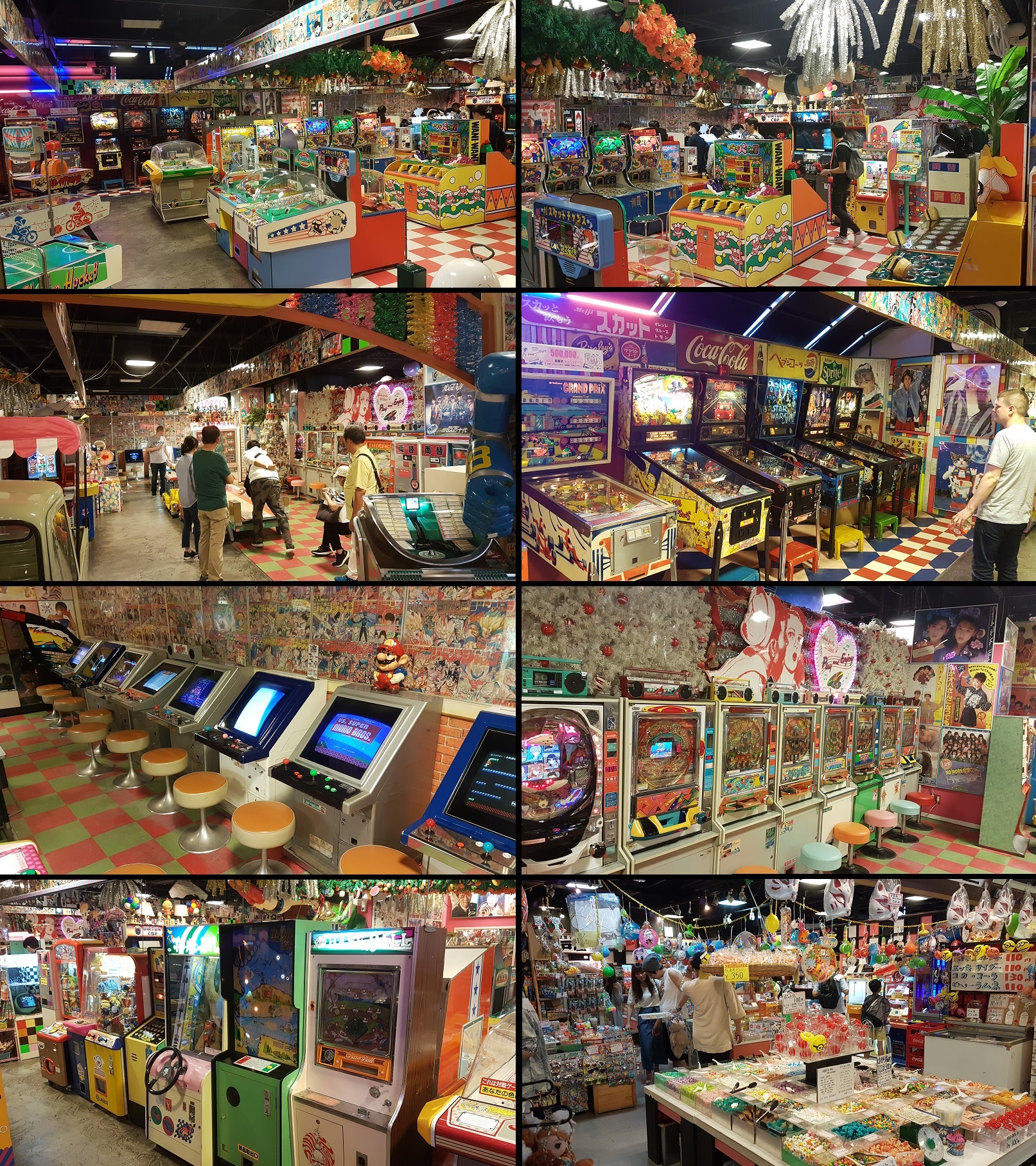 Overall, in my opinion, if you're a gamer, Japan almost certainly has something for you. Sure, it is massively overpopulated, the language barrier can be frustrating occasionally, the public transport is so confusing it hurts at times, and sure if you are from the west the flight completely ruins you, but personally I think it was totally worth it. Compared to the UK (where the founders of OP live) Japan seems to be a completely different world where gamers are catered to with utmost respect. Although it seems that's part of Japanese culture, they rarely do anything half-arsed If they want to achieve something, they put every ounce of effort and passion into it until it is perfect. 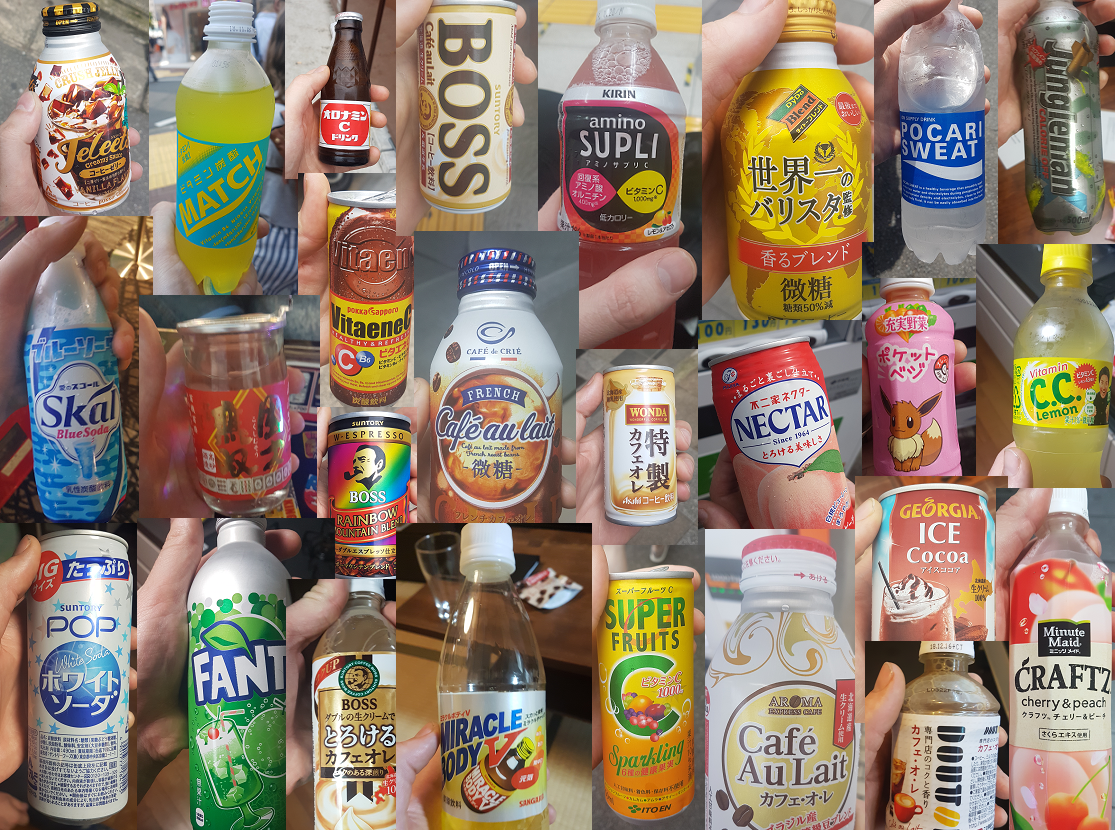