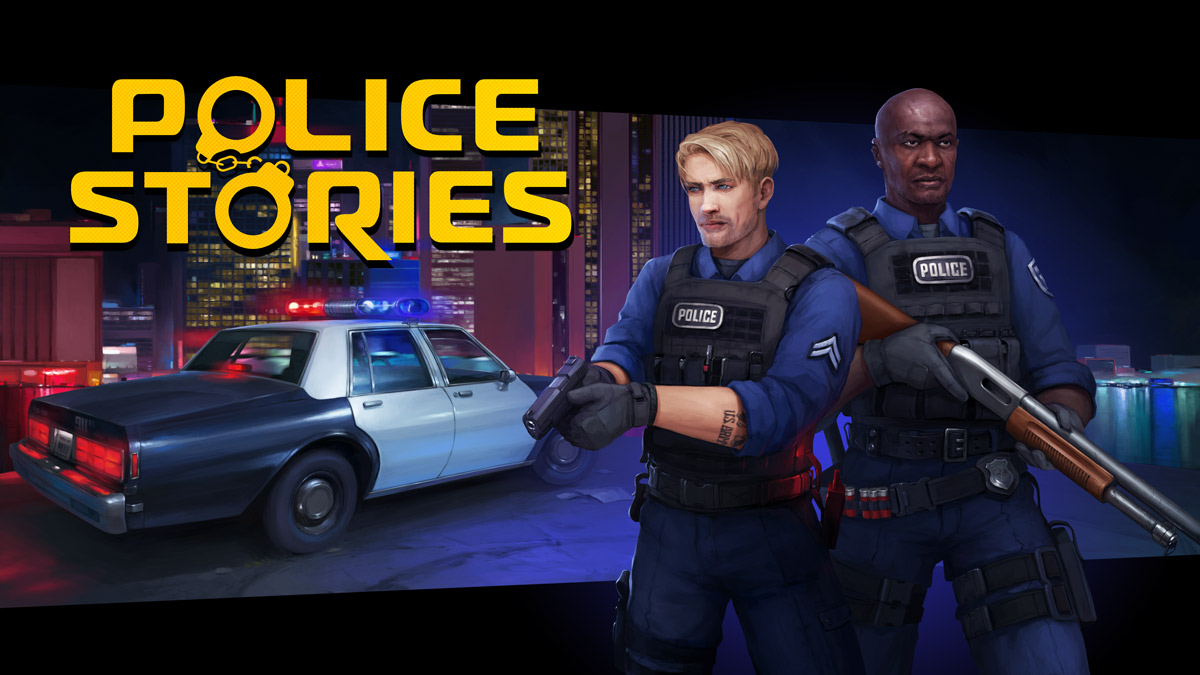 Police Stories is a tactical buddy cop game set in a Neon drenched city, where protagonists John Rimes and Rick Jones are tasked with murderin.. I mean, locking up bad guys and to stop an ever more prominent conspiracy which will ripple through their nondescript city forever.

The opening starts with both protagonists relaxing in a diner, depicting John as a charismatic, hot-headed and egoistic, and Rick as a cold and calculating professional, and ends with both doing their due diligence and leaving for a call on a local Bar & Grill being robbed (half an hour after sitting down in a diner). Their job will lead them all over the city, from warehouses and movie studios to mansions and crusty motels. 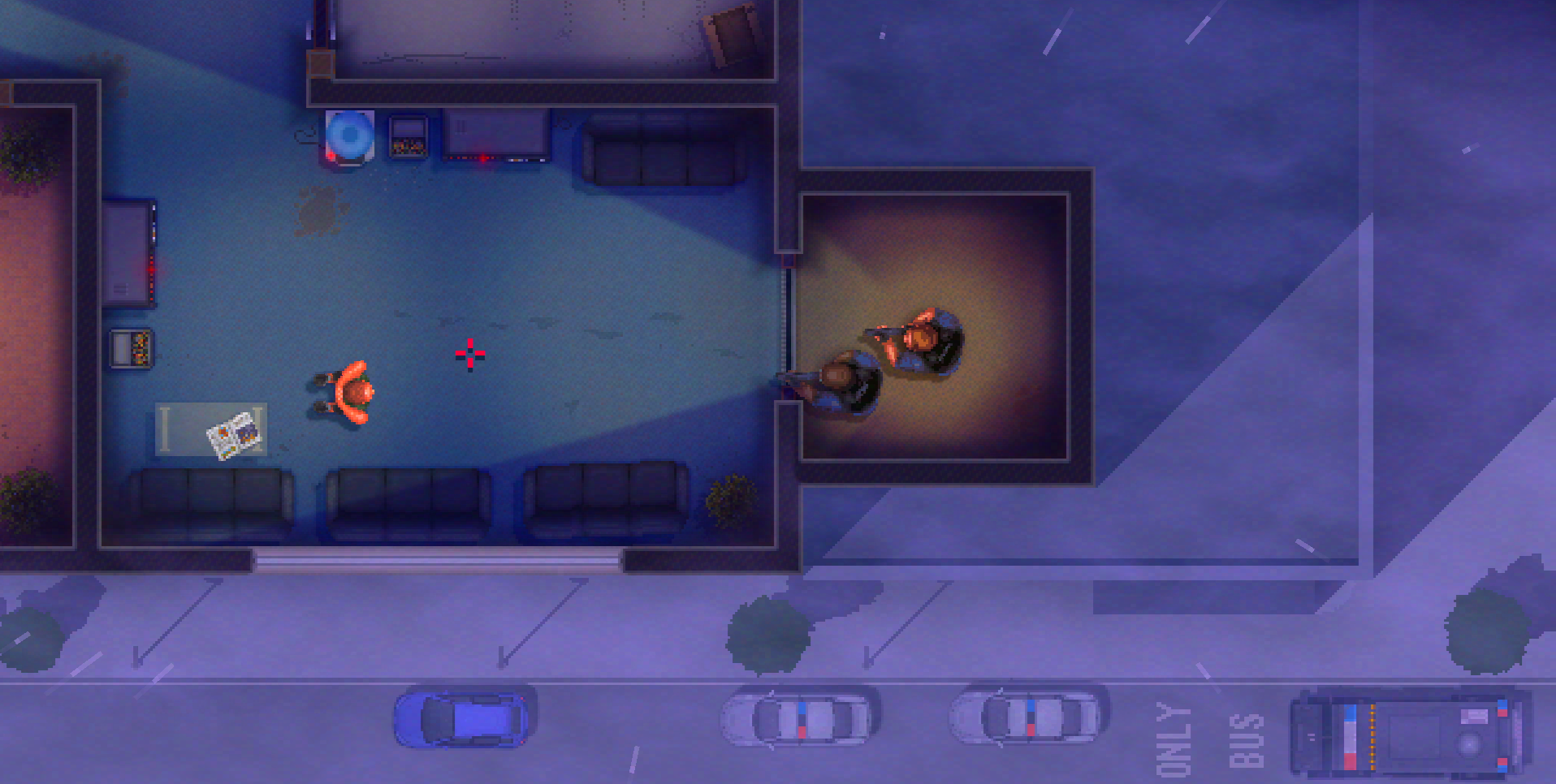 Many comparisons could be drawn from Hotline Miami but as someone who has played it extensively, their differences couldn't be more distinctive. Hotline Miami was an adrenaline trip, juggling multiple variables in a fast-paced environment where a combination of the players' skill to react and adapt was key to success. Movements in Police Stories is more indulgent and slow. The player is given tools to breach and clear rooms, tasked with coming out with minimal casualties and decisive decision making. If a suspect pulls even a 9mm Handgun, John and Rick can go down within two shots without the appropriate equipment. Getting a suspect to submit without the use of tactical equipment requires the player to tell the suspect to get down, and if the suspect does not comply, they have one of two options. Use warning shots near the suspect, which is risky because the spread of both John and Rick's MP5 has a decently widespread for how close you have to shoot, or run up and punch them. Suspects don't always stand still when told to get down either, some run off to a better position to hold a firefight or to a more populated room that has more men with more firearms. This is where tactical equipment comes into play. If you know a suspect has run into a room (indicated by the ripple effect when they are not in line of sight), a simple solution is to flashbang into room and blitz it until all suspects comply. Though, this is where the developers have made a design that does not correlate with the vibe the game reverberates.

On standard difficulty (the highest difficulty available at the time of writing), in order to achieve an A+ ranking on missions, not only do you have to take in account casualties and use of equipment, but time is the largest factor in whether or not the player will get the highest rank in a mission. Using non-meta loadouts not only makes this game significantly harder but also cuts into how much time the player has to take to clear a room with minimal casualties. Usually, a meta loadout looks like Tazer, Flashbangs on both John and Rick, Breaching Charges, Pepper Spray (usually used for interrogation on bomb missions), and maybe Smoke Grenades. With this if you are not in range to sprint into a room and knock a suspect into submission, you can either place a charge on the door, or throw a flashbang, which both lead to a how-fast-can-you-sprint contest to punch each and every gang member and or terrorist until they decide to get on their knees. Not to mention, you can't rebind keys, and the punch button is located on F, which is hard to press in the middle of a room clear in an A+ run, and not to mention, if stun wears off and every vindictive gun-wielding maniac comes to their senses and either draws their weapon and run, melee has such a small reach that you will likely miss if they start moving. This is where taser comes in usually because if you cannot reach a suspect and punch them, you make them have a science induced seizure.

(These are not spoilers, this is the mission right at the beginning of the game.)

Or you know, you could stop caring:
Now I call that a court martialin'

This does not by any means make Police Stories a bad game, it's just the requirements in order to reach A+ rank are obtuse and does not coincide with what seems like the developer's intention, something more akin to an easier going and simplistic SWAT 4, which to a degree, it does achieve. Other criticisms seem like less of a problem, but in actuality hinder the connection and comfortability between game and consumer. As mentioned before, you cannot change keybinds, the player is only greeted with two options when customizing controls, one of which being sensitivity. Not being able to switch melee from an awkward F to an easily accessible mouse wheel is simply not an option. There is only one choice in terms of weapons available to the player from beginning to end: the MP5. Something like a beanbag shotty or maybe even just a Glock or a Sig Sauer to fall back on would give more options to toy with. Situations lose their luster as the game moves on; enemies act more or less the same, run, regroup, shoot, or act defiantly, there is little deviation to speak of, and environments (in context of gameplay) come off as just a different set of rooms to clear with a different aesthetic and design. It does not go on long enough for all criticisms combined to become aggravating, usually taking under a day to finish with around two minutes per mission at most, and with 18 missions base game. It's short and needs some work, but overall it's a positive and deserves a play for its challenging and interesting take on the tactical shooter genre.

Police Stories follows the retro trend with great success. It greets the player with an 8-bit aesthetic melded with the 80's vibrant, dazzling style, and a dark, gritty tone to boot that complements the beautifully its crafted environments. Every detail makes each building seem lived in and used, coffee stains in a dark blue carpet, the wood panels of a diner, each decorated with a motley assortment of different set dressings to add to the connection between player and setting. The devs put a lot of work into making every building distinct and unique, and it shows. Visuals are complemented with Synthwave tracks, while not particularly adrenaline-inducing, do give the context for a slow-paced experience. Instruments are soft with a simple beat that doesn't distract or consume, but just enough to keep the player focused, with the exception being the main title theme. Probably one of the better parts of the game is the feedback between player and action. Footsteps give a sense of weight as boot meets pavement, kicking down a door is greeted with a satisfying, if soft, smashing of wood. Operating John and Rick's firearm sounds nice, the clicks of a magwell taking a magazine are nice and meaty, and shooting, while again soft, have a nice impact on them

1: Trash, 2: Has potential, fails miserably, 3: Has good aspects, mostly disappointing 4: Slightly below average, could be better, 5: Doesn't stand out nor disappoints in terms of quality. 6: Above average, stands out in certain areas but does not warrant extensive praise, 7: Proficient at what it does and very positively influences the experience, 8: Provides a high quality not often seen in games, 9: Almost or at perfection, 10: Innovative, sets the bar higher for video games as a whole.

While not particularly groundbreaking or innovative, does the job to give context to a very fun game

Stylized and Gritty, doesn't come off as bland and provides vivid detail

Very unique in a market with few mainstream tactical shooters, if developers gave even a little more dynamic interactions between player and suspect, along with more equipment and weapons, whether lethal or non-lethal, and customizable keybindings would better the experience as a whole.

Even if it comes off as soft, it still satisfies and heightens the context of the player's actions well.

While simple in execution, it does well to allow the player to engross themselves and is varied enough to not be boring or monotonous, and the character of the instrument good enough to match its setting.