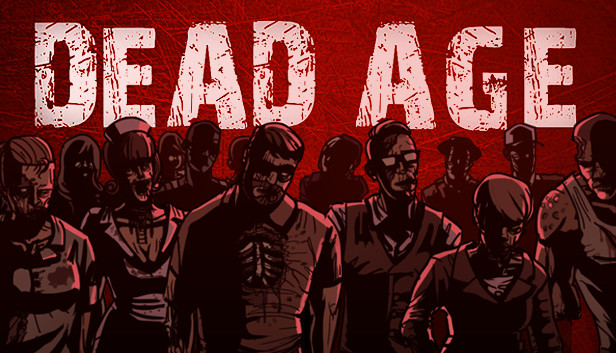 If you love to micro-manage survivors during a zombie apocalypse, taking turns to fight off zombies and some out-of-their-mind individuals during the desperate time, with a little text-based story to spice things up, Dead Age provides such a diet more delicious than brains to zombies.

Like life, what keeps us going is nothing more than food and resources. It remains the same in a world full of undead and braindead bandits that are trying to mess your life up. When your main character dies, the game is over and you will need to start a new game. To beat the game, you need to keep yourself alive until the story ends. While perma-death may scare off a lot of players, in this game it is carefully implemented to avoid frustration upon death. The structure of the game itself heavily depends on perma-death to work. Here’s why. Although the “final-fantasy-like” turn-based combat is heavily featured in the marketing of the game, the essence of the game mostly lies within its management mechanic as it brings the most impact to your progress. To keep yourself alive, you need a team of survivors to do things with you and to keep the resources high. The better you are at managing the team and the resources in the camp, the higher the chance you will survive till the end. The worse you are at doing so, your game will become harder, as you’ll find it difficult to become better. If you lose a survivor, you will lose it forever until you start a new game. It may sound hardcore but it is pretty forgiving and fun. If you want more challenge, you can play in hardcore mode. This game certainly satisfies the people who enjoy the sense of ownership as you manage your team and resources. All these play out not in real-time but operate without a time limit, meaning you can take your sweet time to think about your decision before you make your move. 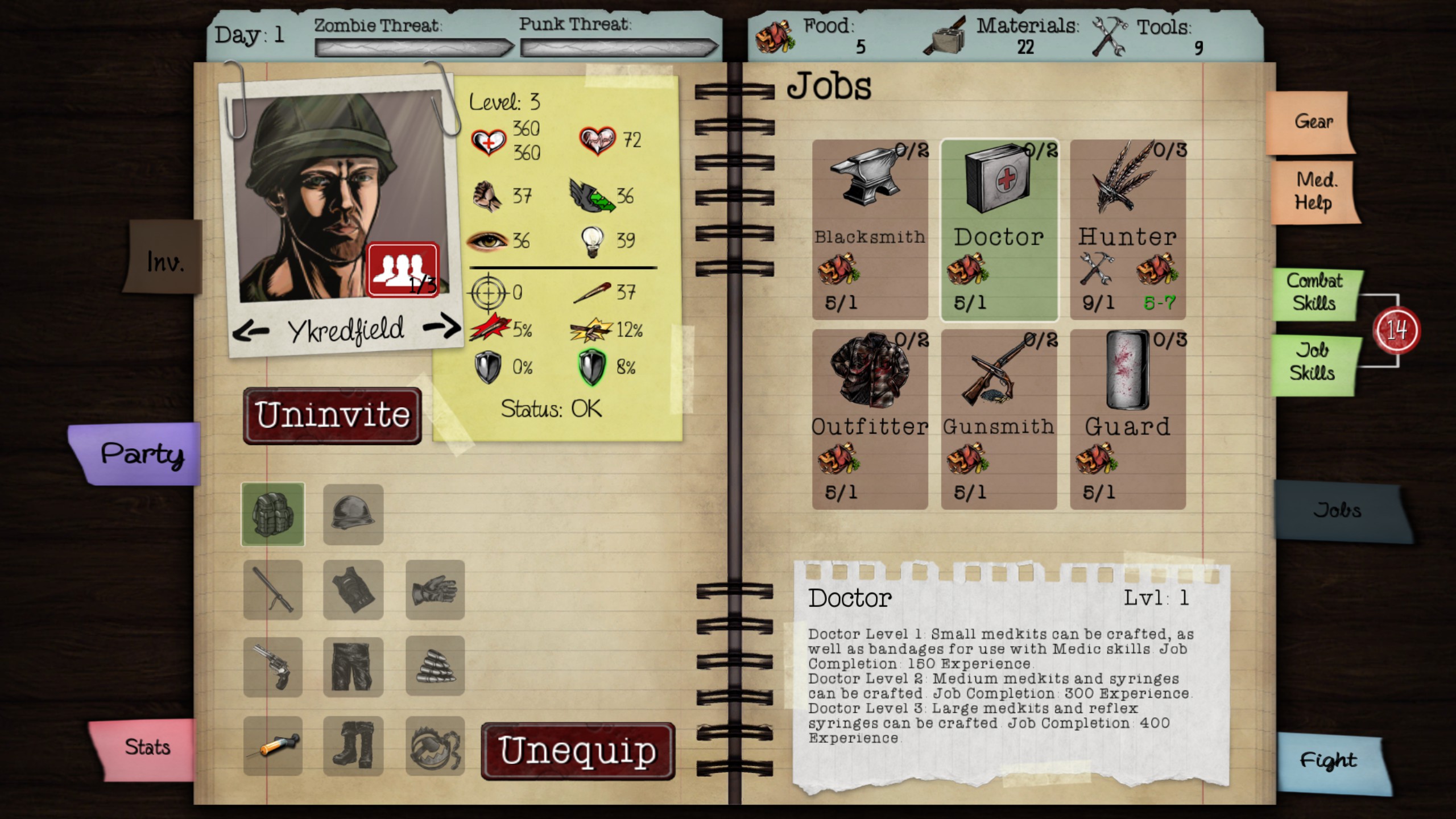 The premise of the game goes like this - you live day by day trying to find a way out of this zombie situation. You start each in-game day with a prompt telling you a summary of what happened - in terms of story and of how many resources have been consumed in the previous days. You then need to decide what to do for the following day - assigning survivors to a specific job that includes crafting useful items, hunting for food and guarding the camp. You may also join one of the jobs or go out of the camp to fight zombies in selected areas to gather specific resources. Entering an area will consume a day by the time you end the battle. The moon falls and the sun rises. You start another day...and repeat. It is surprisingly thrilling to go through each day because of the random occurrence of unexpected events in the camp that will affect your next course of action. It becomes a tug-of-war between how much you should be doing something and when you should just give up. Addition to that, a wrong move may result in a snowball effect of terrible consequences that lead to...perma-death. Without perma-death, the game will not have as much impact as it is. What the game tells you is that in a zombie apocalypse, running out of resources is more scary than being attacked by zombies.

However, both the management mechanic and the combat system compliments each other in the loop of risk and reward. 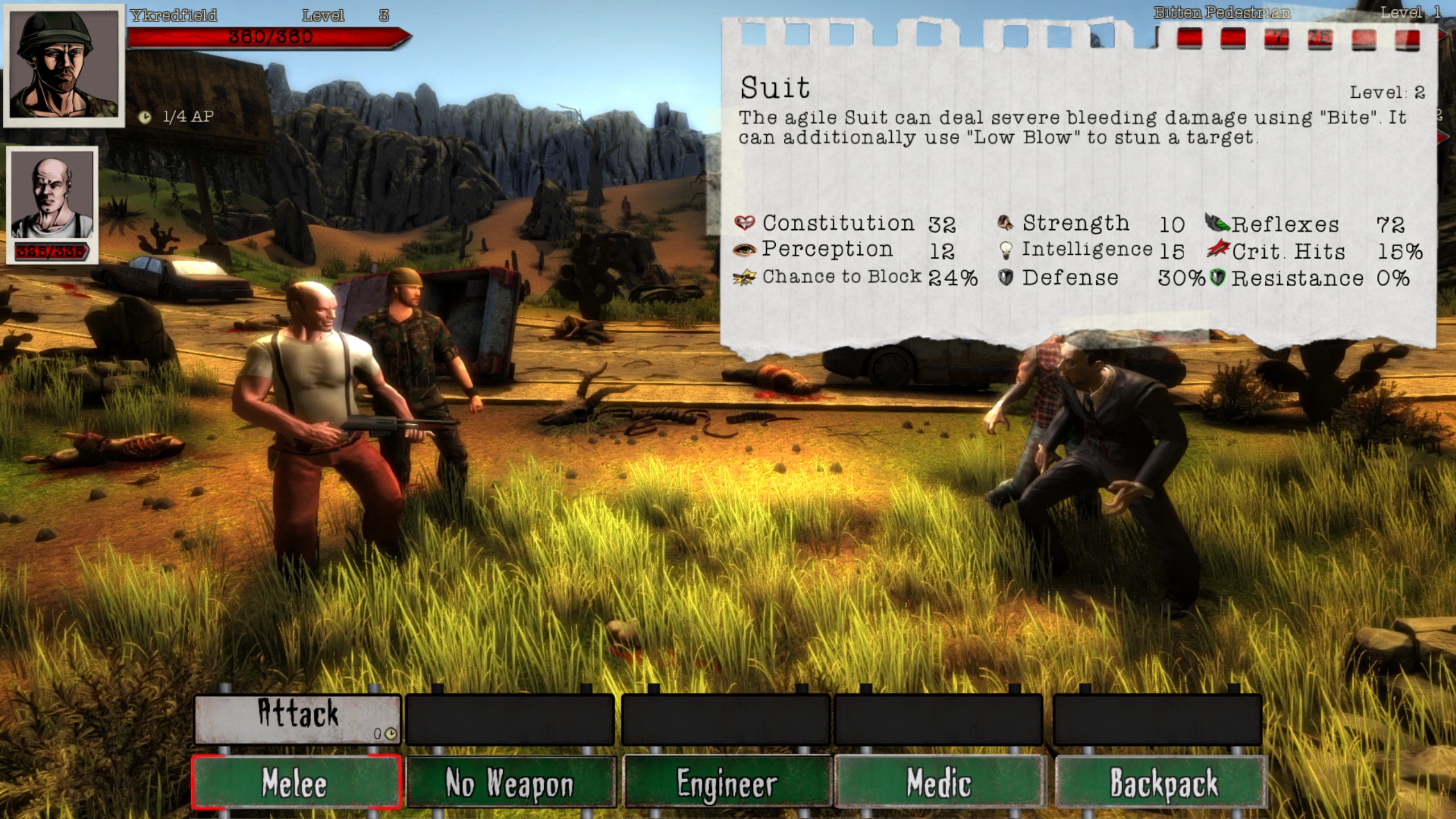 First of all, please allow me to present you with an example.

This is the question you’ll be asking yourself in every fight to determine your move. You may not die so easily, but being calculative will definitely grant you the advantage over the long run. It almost becomes a game of math. (I play it with a calculator) It is very rewarding when you solve the equation and perform the best procedure. The depth of combat surrounds the variation of character builds, enemy types, weapon types and the situation met when you choose a certain action during the story. To build your character, you need EXP, to gain EXP, you need to fight, to fight better, you need weapons, to get weapons, you need to craft, to craft, you need resources, to get resources, you need to fight, or assign to a job, to be assigned to a job, it requires resource, to get resources…..you get the idea - the two major mechanics compliment each other but there aren’t only one way to get what you want.

This is however without its shortcomings and that is one of the reasons why many claim this game to be boring. Although I don’t find it boring, but rather addictive actually, that it is understandable when a game repeats itself over and over again, it’ll start to become dull. The game suffers from the deep but not deep enough attack options and enemy types. In the first playthrough, you will learn about a variety of attacks, combos and enemy’s formation. The lack of survivor’s unique abilities makes the survivors feel flat and all the same, granted that you upgrade their attributes to be identical. The missed opportunity quickly shows itself as you progress further into the story and starts wondering why you should even bother with some of the attacks. To clear an area, you need to go through 20 stages of zombie battle (you can forfeit anytime). Doing so is tiring when the same routine plays out similarly. 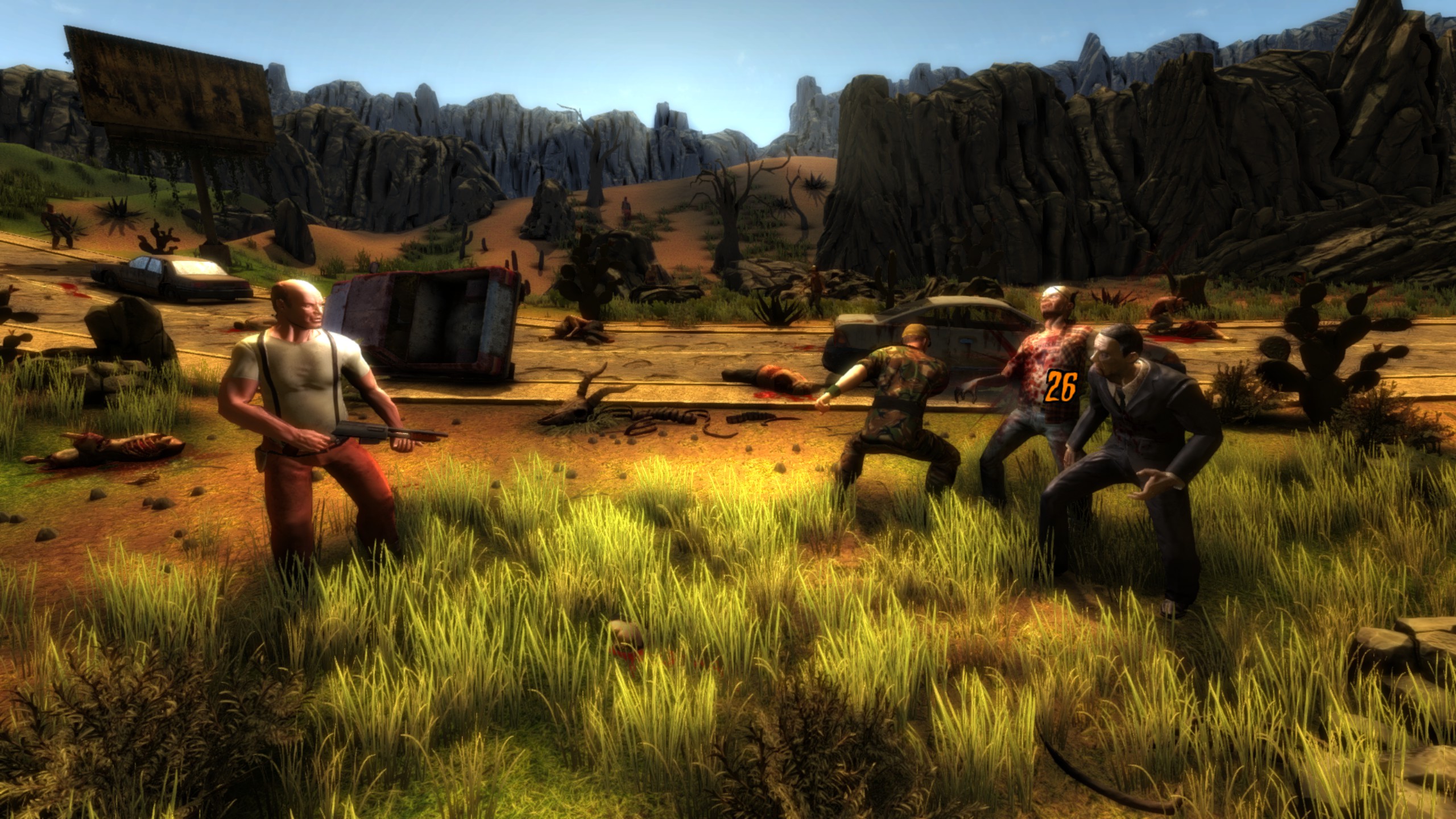 What’s more irritating is that the graphic shines in the text-based segment but quickly falls apart in the 3D segment of the game. The graphic of the game (only the 3D part) cannot compare with the standard of the rest of its amazing mechanics. The biggest culprit for the unattractive graphic is the lighting and high contrast, which seems to be placed randomly. The backdrop is not motivated as well, leaving the battleground dull and depressing. While dull and depressing may seem to be a good description for a zombie environment, it however does not feel dreadful nor atmospheric. This is important as you’ll find yourself staying in this area most of the time as you engage in combat. The 2D segment however is stylish and it tells a story and stating stats. 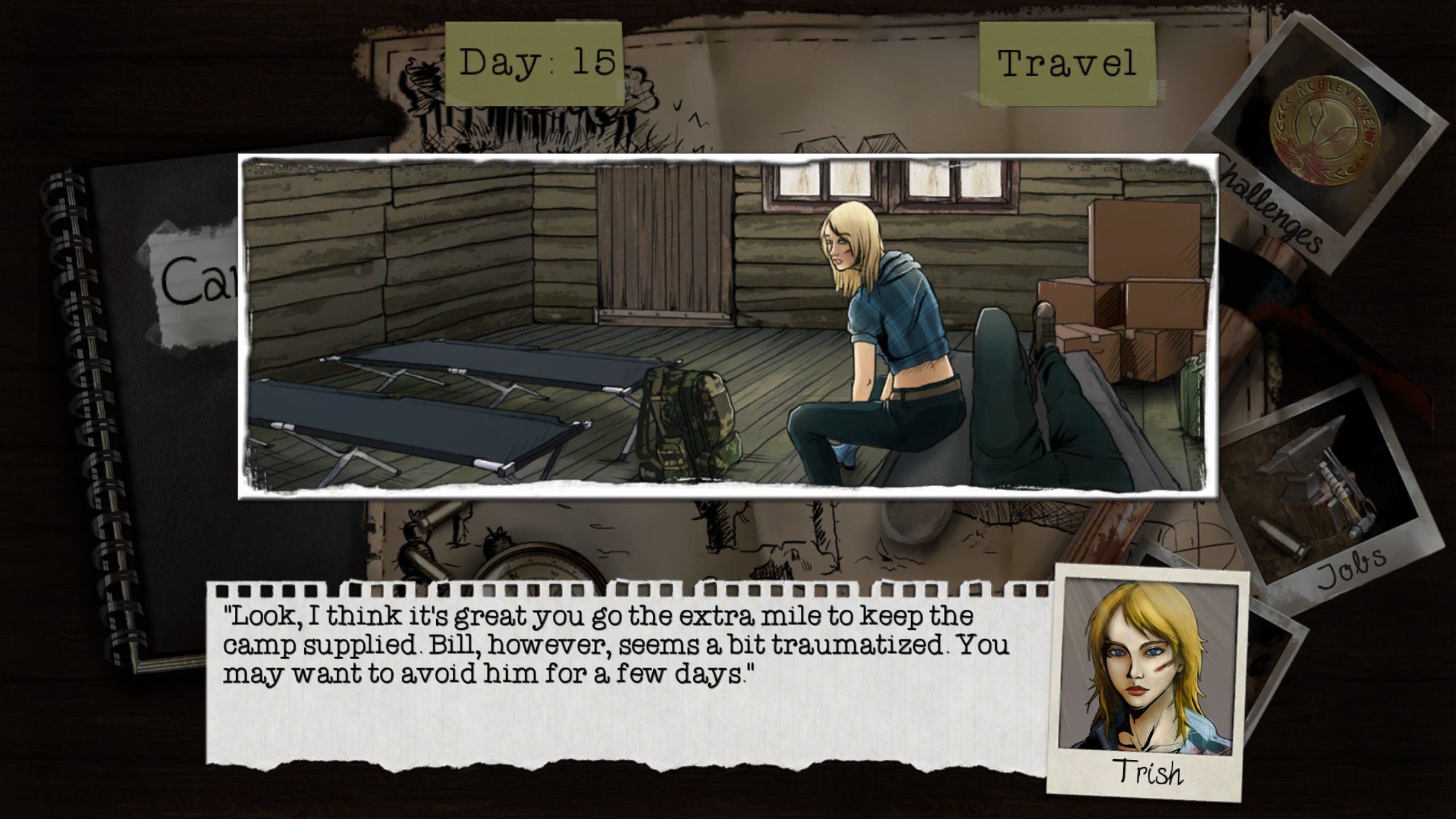 The story is similar to many other zombie fiction - you find yourself in a camp with a group of survivors fighting off suspicious folks while the undead roam around the world looking for food. It is a story about trust. The stories can be divided into 3 categories - the main plot, the characters’ backstory and the day-to-day life decision. The survivors' backstories may vary every time you start a new game. Keeping each replay fresh. Some days would have interesting stories happening in the camp, and objectives to complete (most with deadlines). Completing certain objectives will lead you further into its story. The story is interesting enough to keep you engaged, as it involves a bit of who-to-trust suspense with payoffs. This part of the game is actually quite important as it affects your survivability as well. The decision you make affects the outcome drastically.

- Character building is flexible and distinct to have different kind of experience.

- Story of trust is quite suspenseful.

Replayability: 8/10. Designed to have replayability but you can’t carry over your previous saves.

Recommended for: Enjoys turn-based combat with the emphasis of resource and team management.