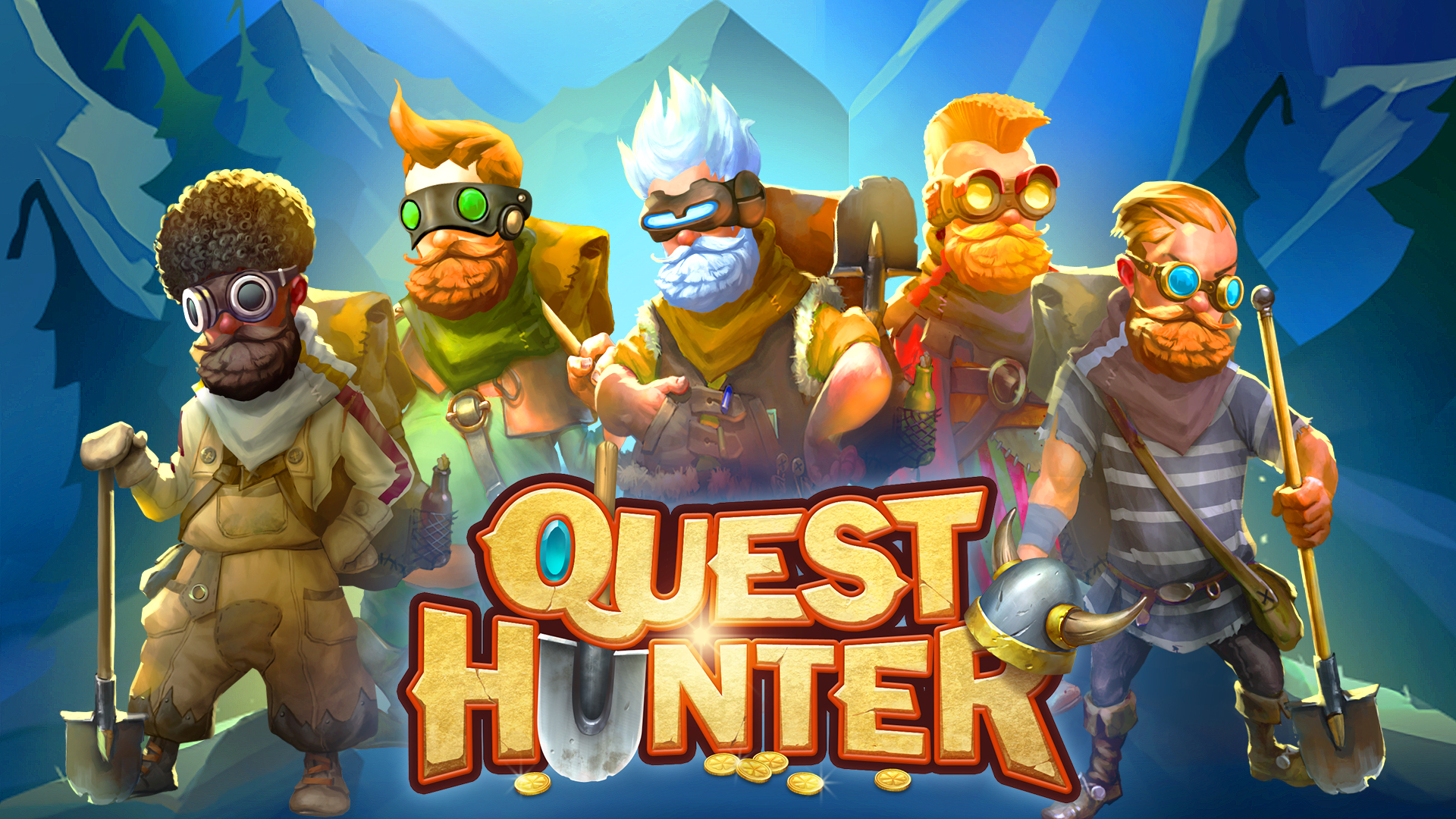 Quest Hunter is a charming casual action-RPG that puts story and character progression, exploration and combat as its core experiences. Passion can be felt throughout the game as the developer carefully crafted this relaxing RPG with simplicity in mind.

Story often posed as secondary in games like this but not Quest Hunter. This game leads you in with its humorous narratives. The story is simple - you were flying your airship and suddenly the sun went missing, somehow caused you to crash onto an unfamiliar town. As a stranger, you seek help to rebuild your airship while helping the town folks along the way. As you learn more about the town, the plot thickens and the mystery starts to pile up.

This game is very charming as it greets you with this very first dialogue option in the opening... 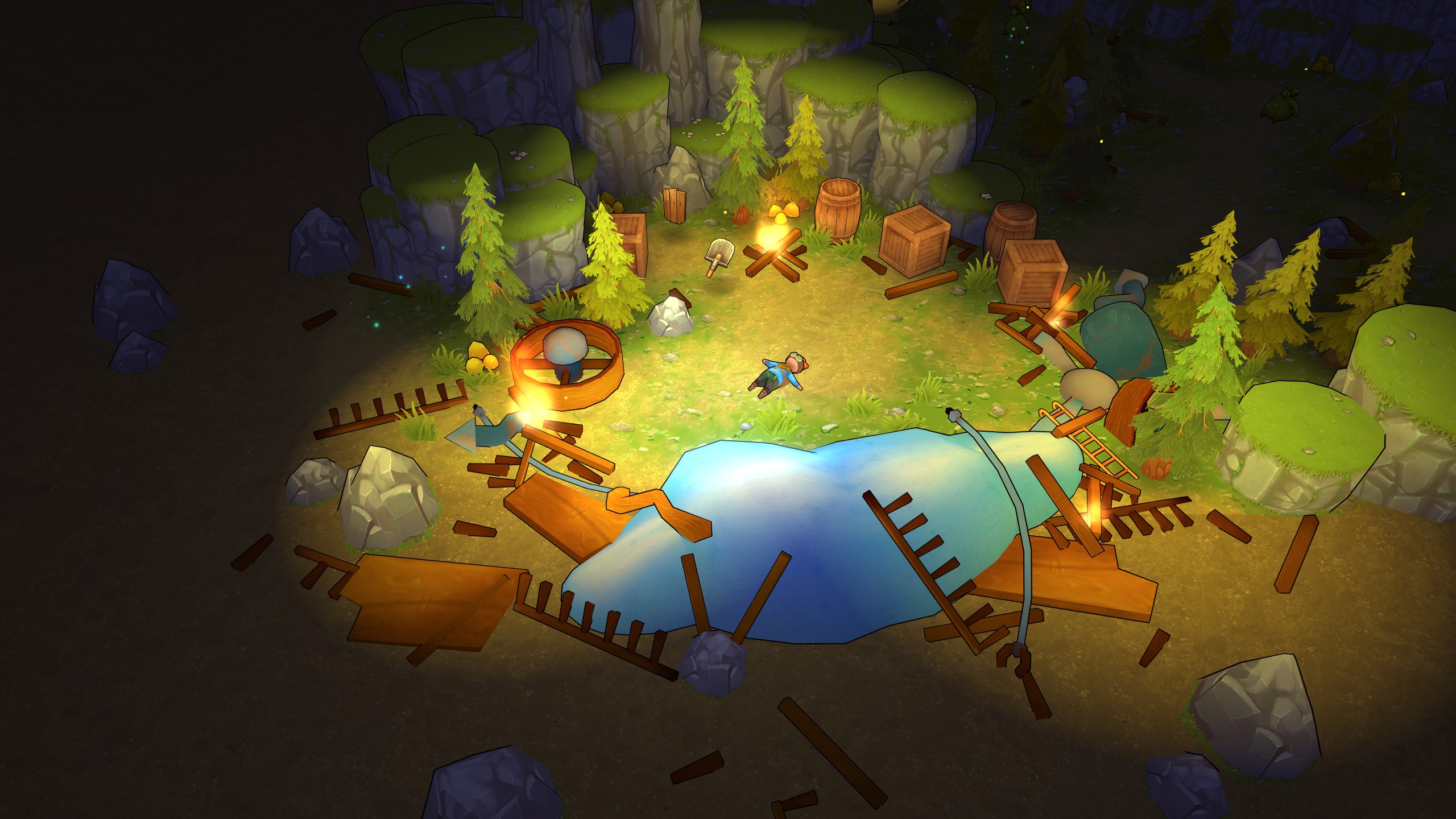 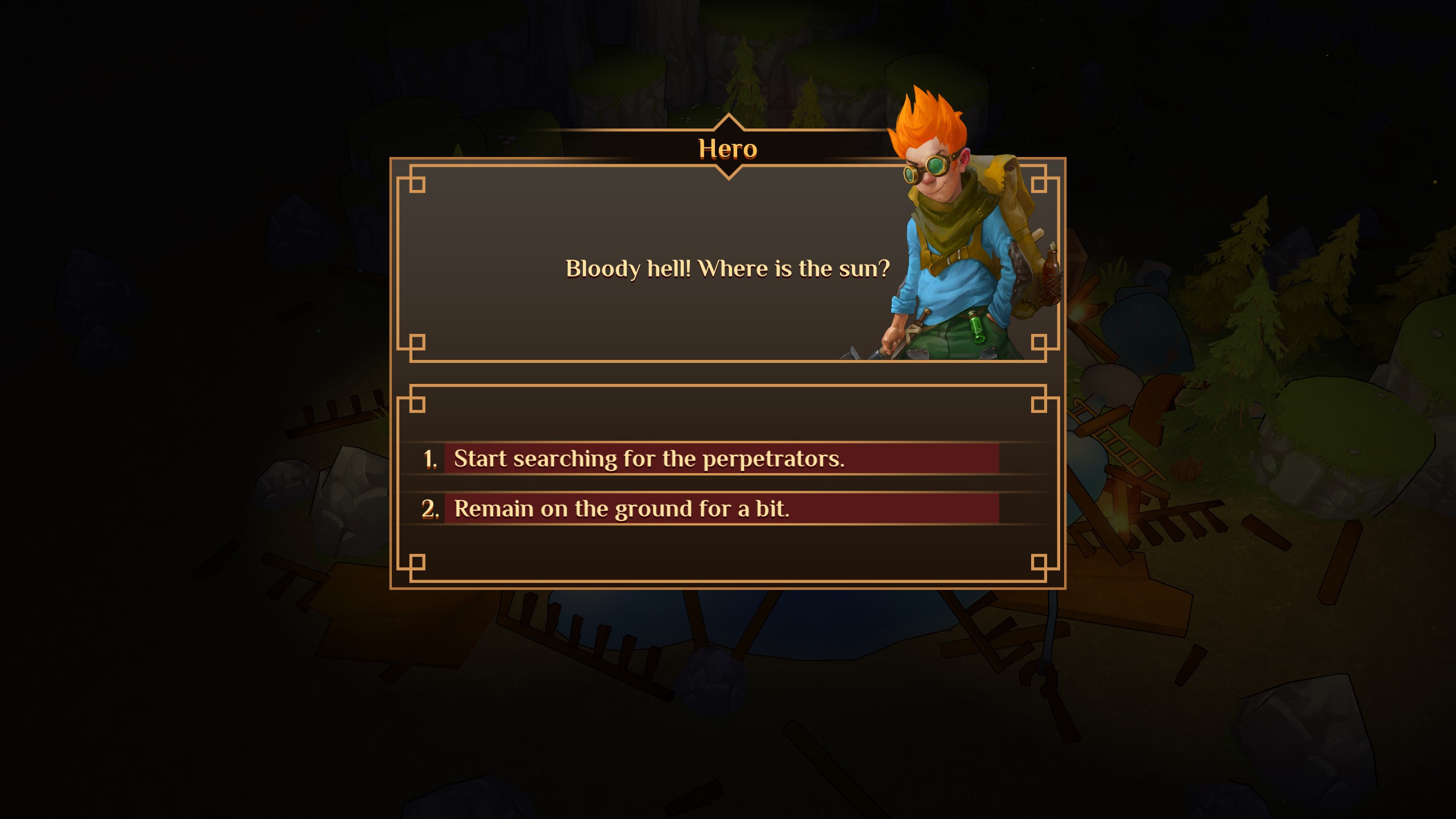 ...stay on the ground all you want and sunbath, you probably deserve it after a hard crash landing. Oh but the sun is missing, right...

The story is easy to follow. There are no notes to read, no long exposition in any means. No convoluted lore nor complex plot line that requires gallons of brain juice to digest. Just relax and enjoy the ride. When there are notes, they are visual hints for certain puzzles. The story is told mostly from dialogue exchange and the dialogue barely goes above a paragraph long, and they are delightful to read.

On top of that, YOU get to pick your own dialogue from a selection that defines your character. You can be heroic, cheeky or straight up mean, which adds engagement into the character you supposedly "role-play". 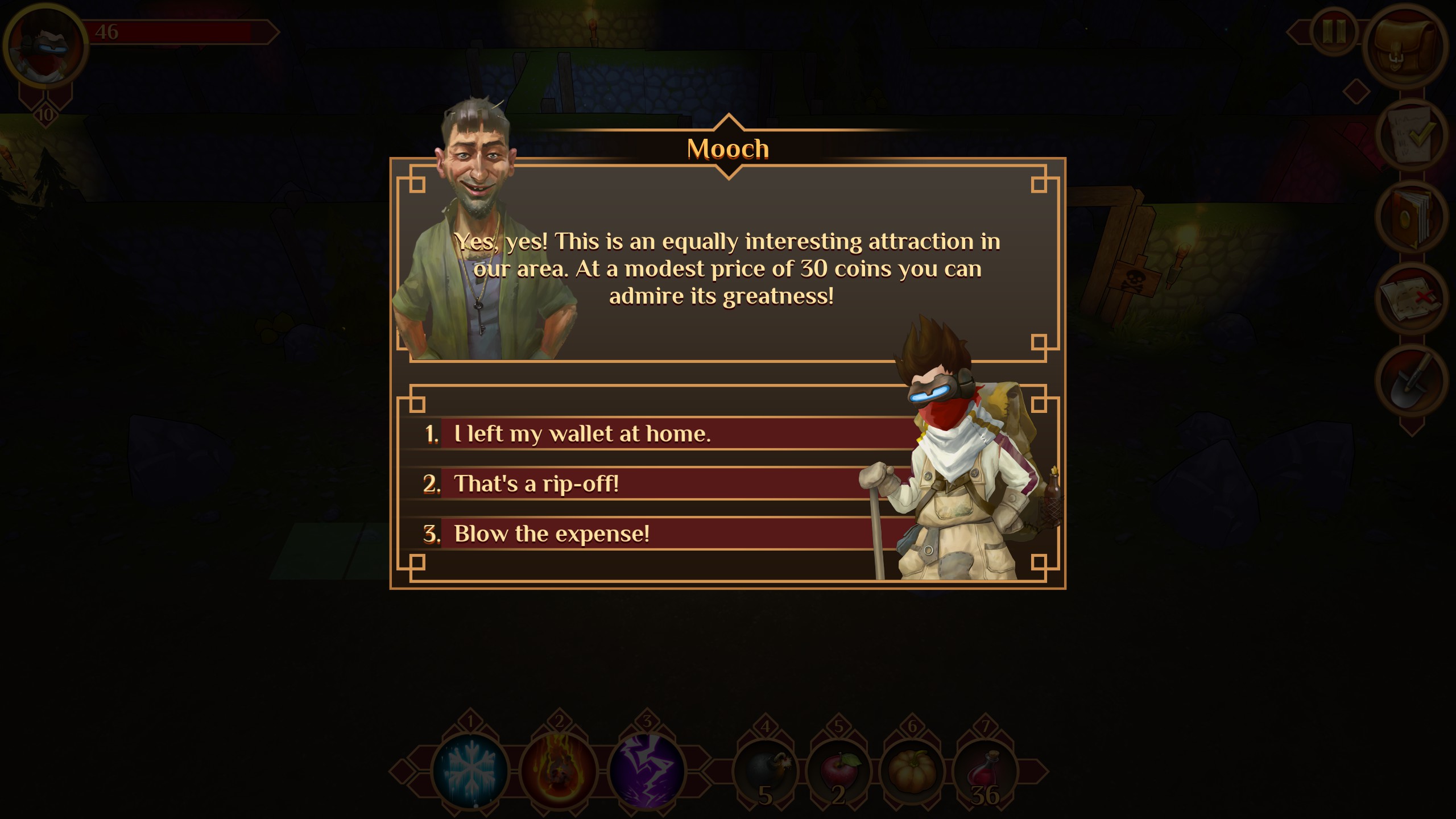 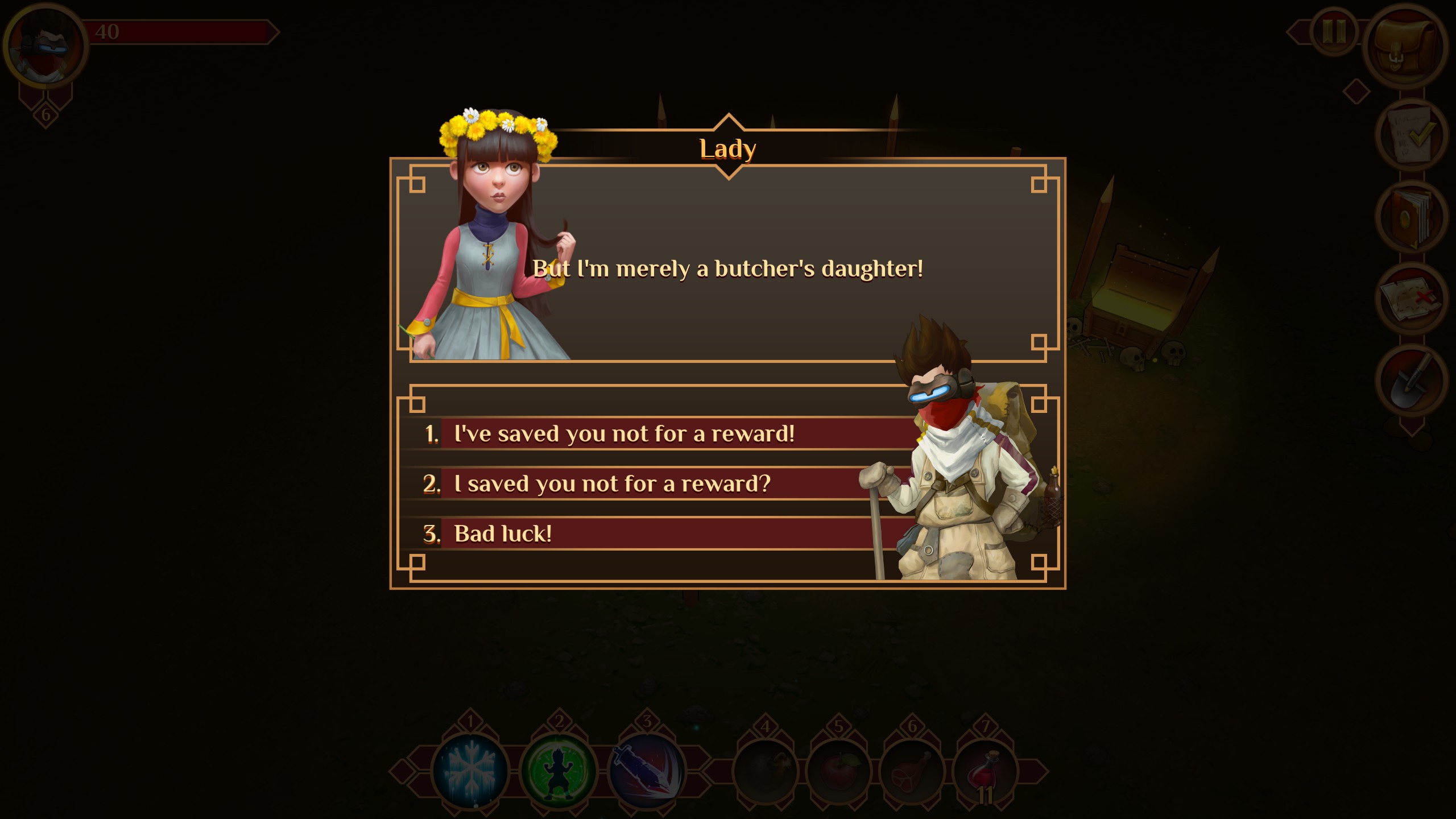 This is the biggest strength of the game as the dialogue you choose leads to some minor consequences as well. The game aims for casual experience, thus what it offered is the basic formula of what makes a RPG, a RPG - character customization, skill tree, item stats, player stats etc. Although you won't be scratching your head trying to figure out what the meta is - there's none, it is so simple that all you need to do is compare which one has the higher number. This is where the game shows potential that a little more complex would help make it more fun. There are a wide range of weapons you can find throughout the game but there is no reason to choose the weaker weapon to use when the options are provided in the shop. This is less obvious in a conventional RPG as there are gazillions of random stats that distract you from looking at a certain set of items but in a simple RPG like this, all items (not many) take the front seat and it becomes obvious which will never be used. It offers nothing more than an illusion of options. Some drawbacks such as reducing the player's movement speed on using the best weapon could easily make the decision harder, and more fun when making such a decision. Speaking of Speed, there is nothing that bothers me more than the character movement speed (but easy to get over with).

When you first drop into the game (drop literally because you crash landed, get it?) The walking speed makes sense as you take your time exploring an area for the first time. In combat, the enemy speed is also designed to be aligned with yours so that you won’t overpowered them nor vice versa. The problem arises when you are backtracking to do a certain task...that's when it becomes painful and I often hope I can sprint. THANK GOODNESS one of the spells granted that wish as it activates faster movement for a given time - that immediately became my favourite spell of the entire game. The only drawback is you can only get it halfway through the game (unless you grind it in the beginning, which is not recommended).

The walking speed wouldn’t be a problem if the scenery is stunning to look at, at every turn. The art style, although unique, gets repetitive after a while. The level is well designed with fixed assets that favors practicality more than beauty. It isn’t jaw-dropping but at least it serves a breath of fresh air when you first enter a new area. After that, it is more or less the same. The increase of movement speed or the makeover of stunning visuals would highly compensate for the struggle of “the walk”.

There are a few randomly generated dungeons you can explore in the game multiple times to grind your character (which is not needed as your level is capped at 20 and you will probably get there before the final level if you explored each area at least once) The dungeons are a lot bigger than the designed levels and it gets tiresome overtime as you do the same thing over and over again. Another randomly generated level is the triggered encounter you face while travelling from one area to the other. 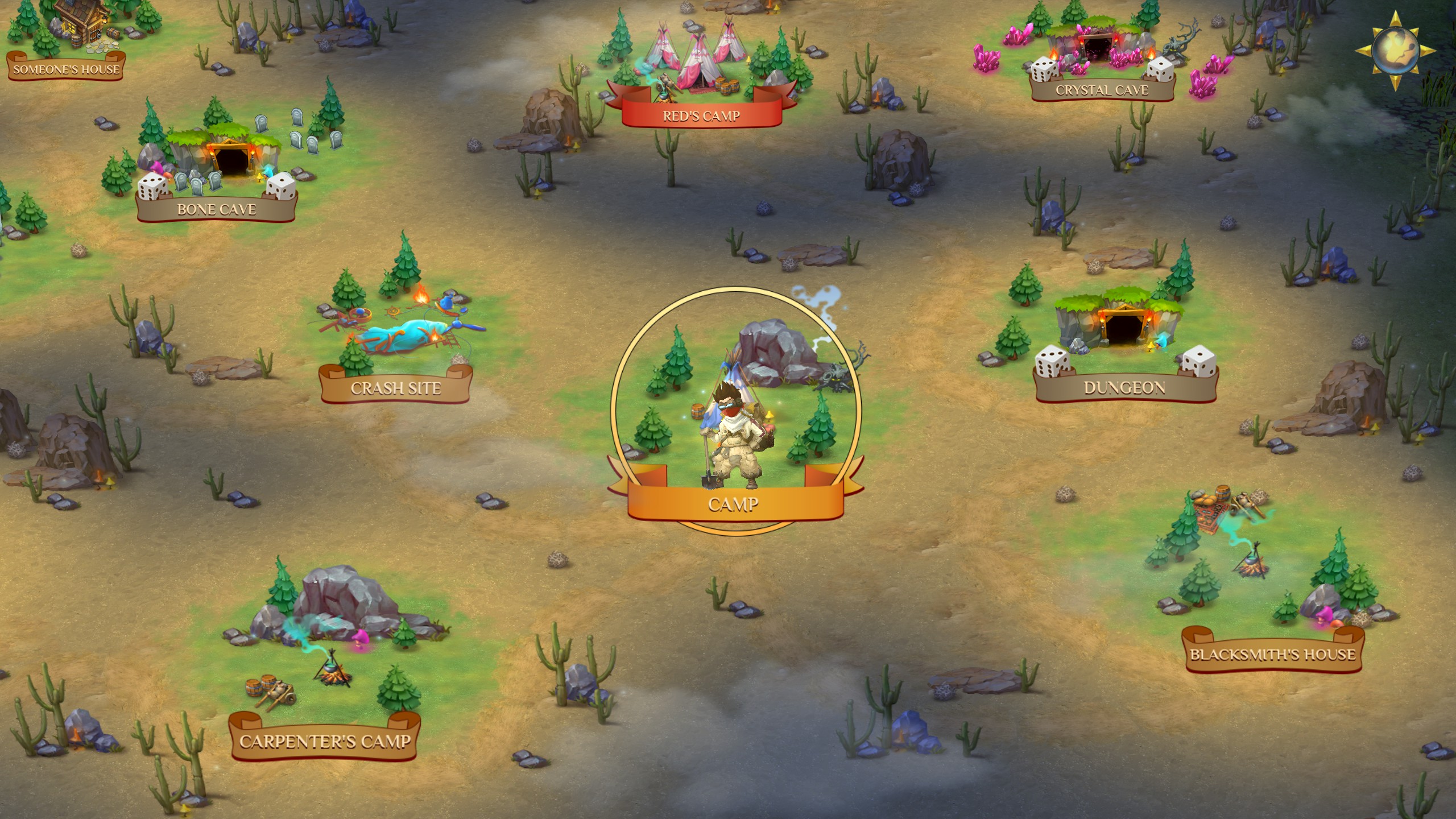 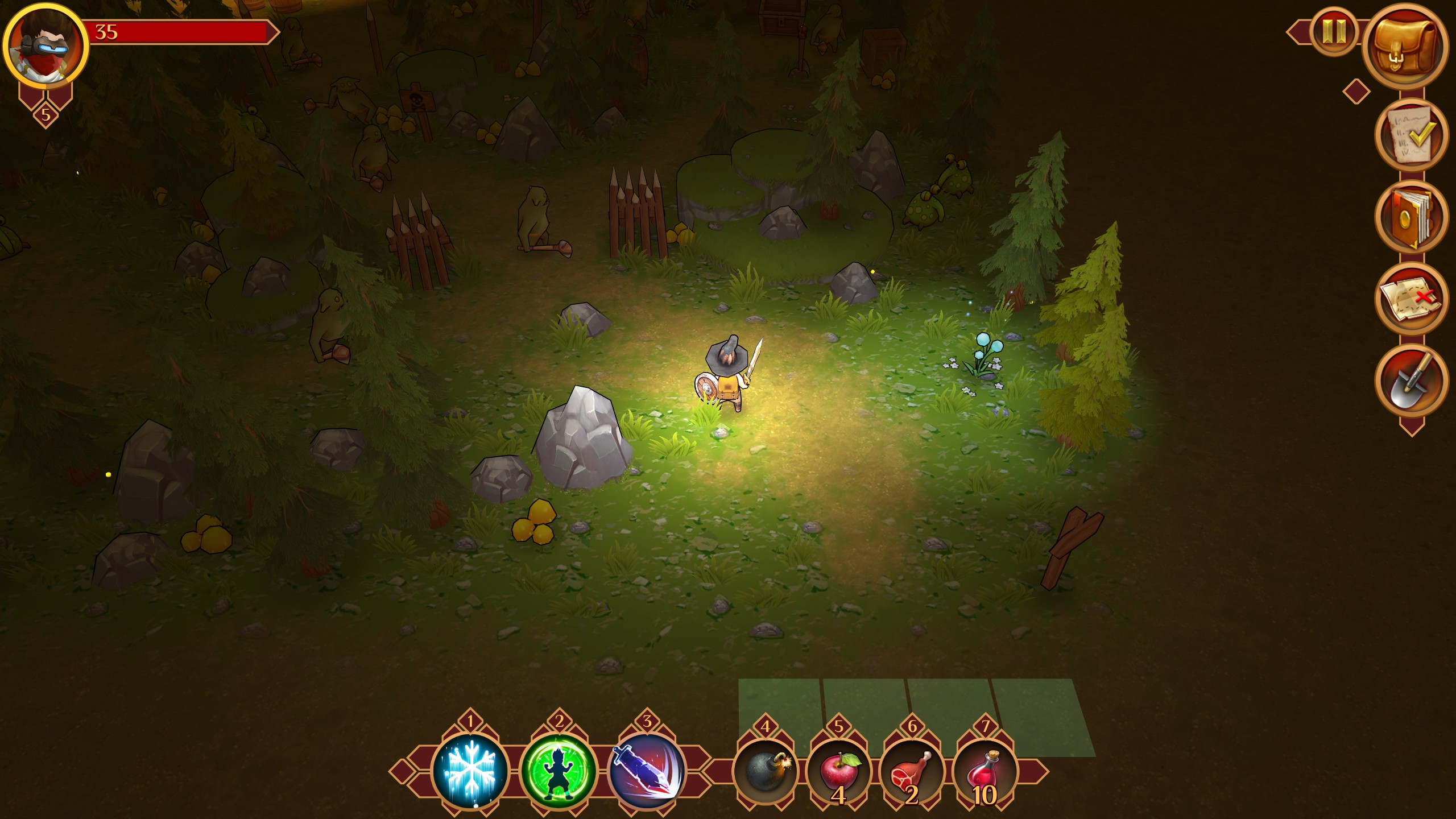 (Think classic Final Fantasy random enemy encounter)These two experiences will most likely cause burnt out to the players. Thankfully, it is optional!

A game like this is not complete without a cute music looping in the background, accompanying your journey. One music in particular that I find myself humming in my sleep. It’s epic, comfortable, and makes walking a little more tolerable.

The game encourages exploration by expanding the level's depth with hidden secrets. Depth literally, as some secrets hid underground. Get your shovel and get it dug but not without first identifying the spot of hidden treasure. You need to walk around until your shovel icon starts blinking, indicating that the treasure is buried below your feet, then you can perform the digging. Some secrets hid behind trees and stones. That would be insane if the map is huge and you need to walk every inch of it to identify the spot, cut down every tree on sight and harvest every stone you can find. It certainly does not help with that walking spe…. No worries, the developer got you covered! Randomly generated dungeons are free of secrets and the designed areas are small. Besides, the secrets sometimes have visual hints so it is not hard to find. Some secrets are rewarded after solving a puzzle. 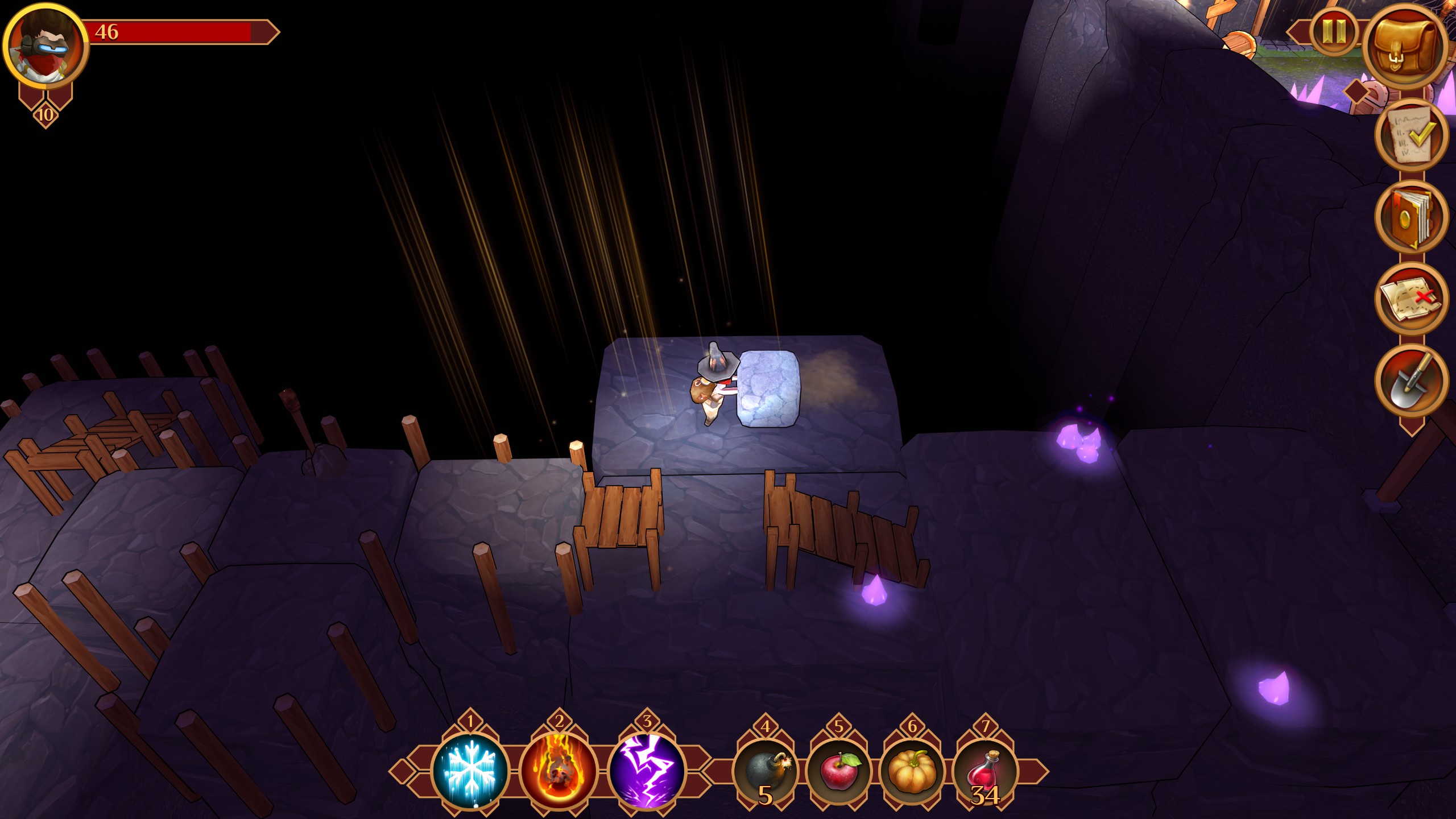 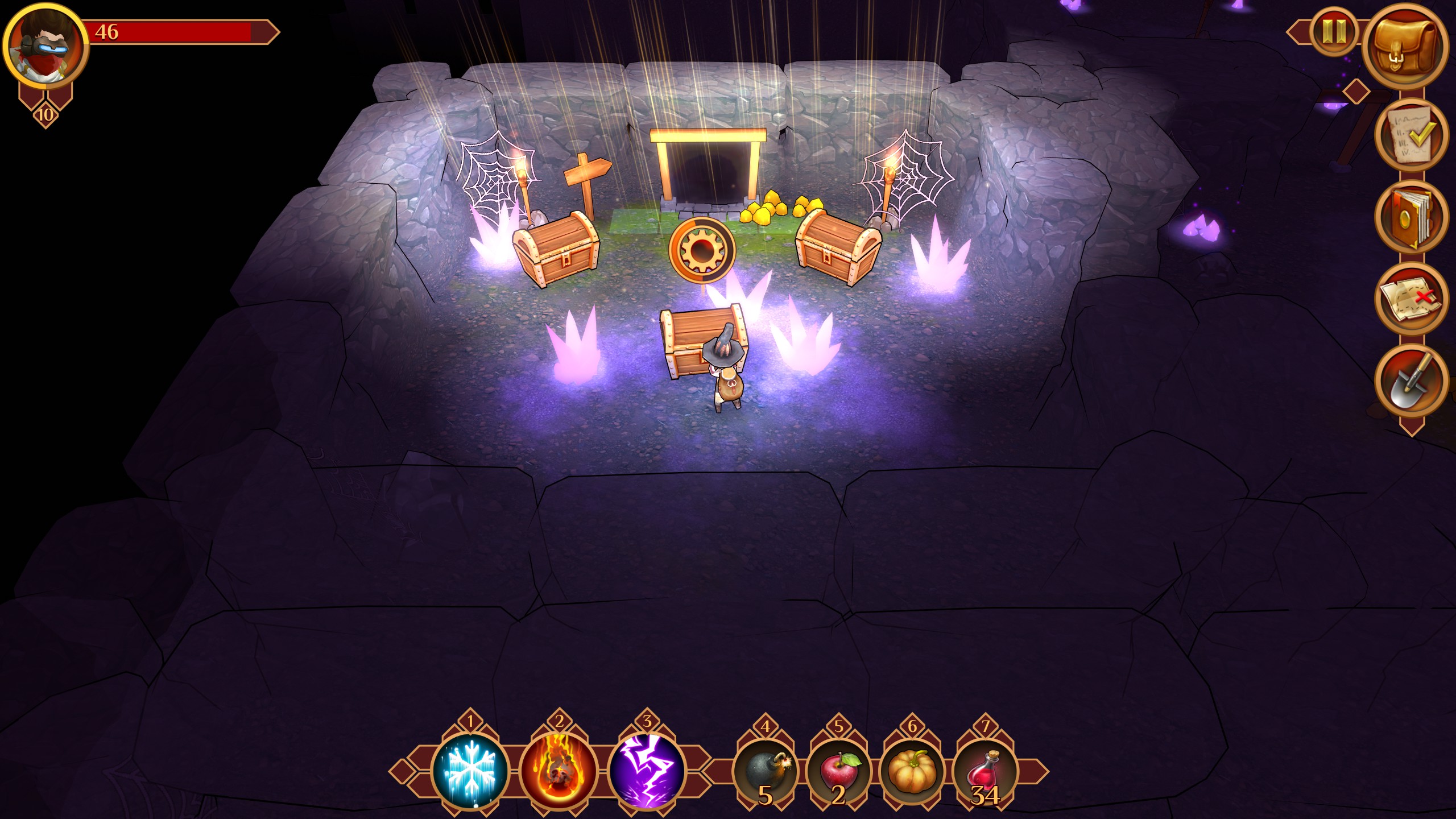 Puzzles when first introduced in the game raised the expectation and imagination for how fun it would be to have increasing difficulty with these puzzle mechanics. One thing I was wrong about is expecting it to be complex, and complexity is truly not what the game is trying to offer. A few fun puzzles here and there for casual players to enjoy wouldn’t hurt but some may ask for more.

It’s simple (yes it’s a simple game) - left click to attack, right click to block (unless you use a keyboard), in addition to 3 hotkeys for 3 different spells of your choosing among the 10. The combat is calculative in the sense that most enemies attack at different speeds. The combat is in real time. It is fun when you are tasked to think whether you should block first before your 3 slashes that finish off the enemy or attack right away to save time because you want to get your lunch after. To consider how many slashes can you perform before the enemy attacks again, perhaps 4 slashes, followed by a block, then another 4 slashes, and repeat, is one of the main strategies in its combat mechanics. It adds some of the clever strategy if you combat it with the spell.

The spell however is not diverse enough to offer a variety of strategies. Some are more important than others, eg. the speed spell. So you often want to keep those binded as much as possible. The upgrades of these spells offer nothing more than higher damage or longer casted duration. It is noticeable that spell upgrades have some missed opportunities here and there but it isn’t a big issue.

Fortunately, the game offers a variety of enemy types. Some encourage you to use specific spells, some are immune to it. There is no resistance in this game, so all attacks are true as it stated. 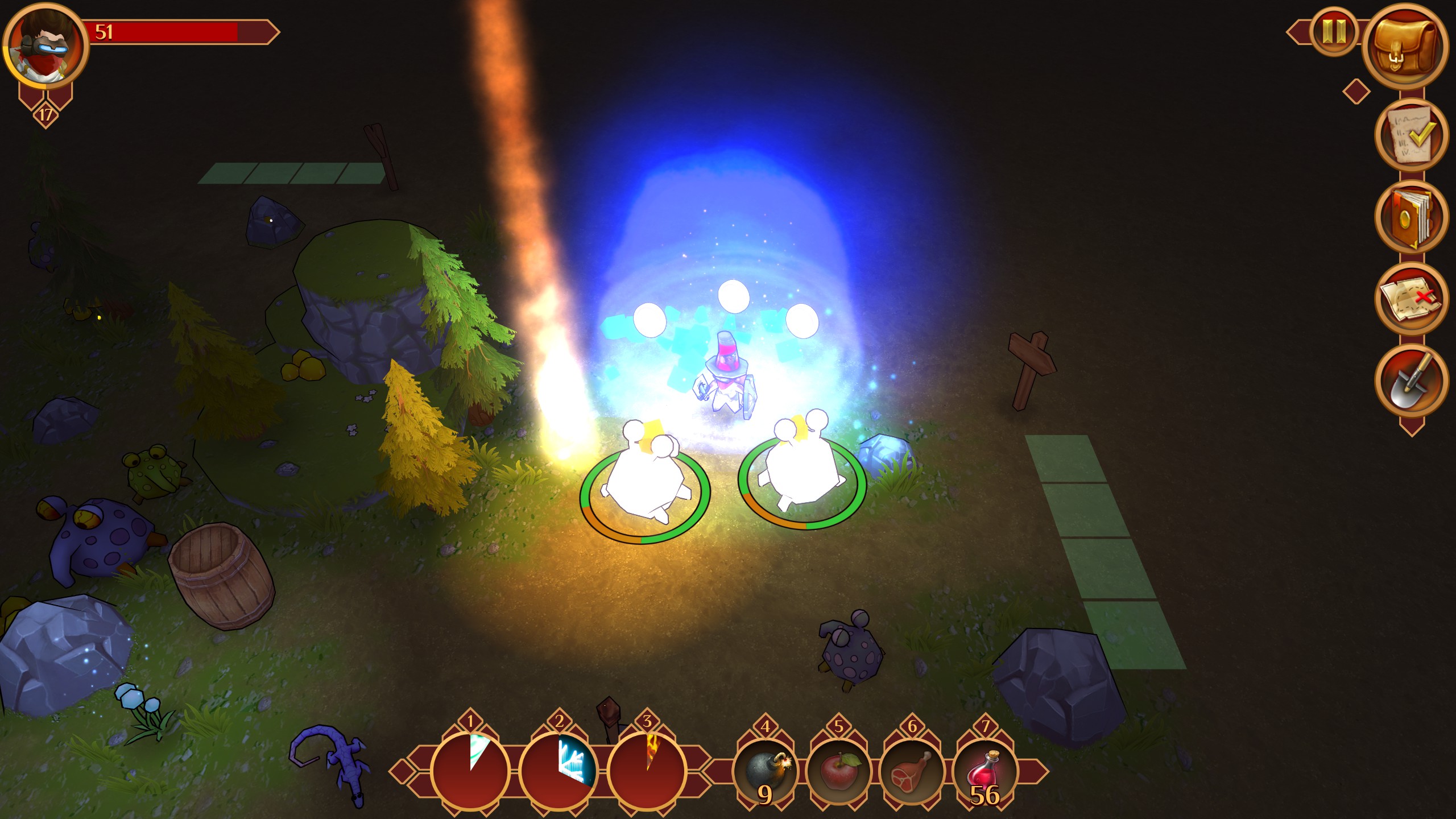 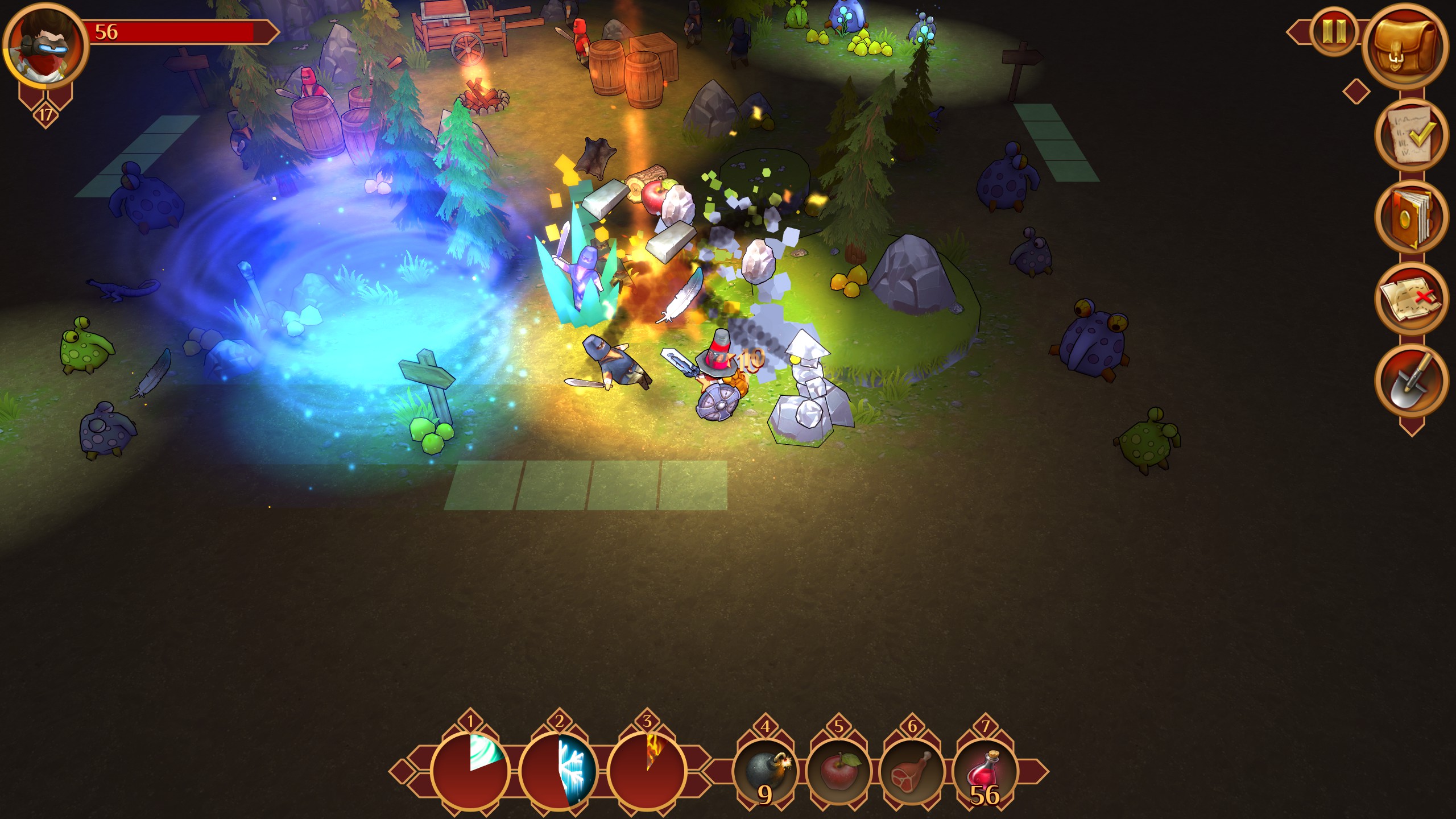 - Picking the dialogue is interesting as it offers distinct options that may or may not affect the outcome.

- The characters are charming, including the enemies.

- Finding secrets is easy but rewarding.

Replayability: Average. Other than the variation of outcome from different dialogue options, nothing's worth revisiting.

Recommended for: Family. If the complexity of RPG scares you.