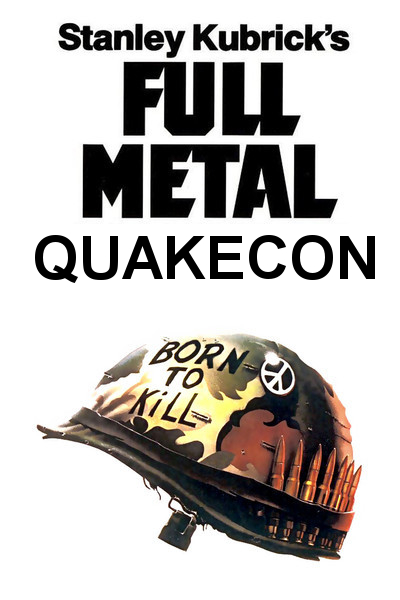 So, I left you hanging on Friday, didn't post a thing 'cause I was too darn tired. But I'm back, I got my shit together and I put it where it belongs. Let's go. We got some minor shit and THE QUAKECON GOODNESS.


DOOM: UNTO THE EVIL TRAILER
Say "Hello" to the Harvester. C'mon, don't be shy. Say it. Louder. Okay, forget it.

This is the first big multiplayer DLC for DOOM, which I wrote about earlier. Like, a week earlier. Anyway, recap time: 1 new demon, 3 new maps, 2 new guns something something $14.99. So, feel free to watch the trailer and buy it.


HOLOLENS AVAILABLE FOR RICH PEOPLE
Why only rich people? 'Cause Hololens is for people to whom Vive and PSVR are too cheap. Still, if you are reading this and you are in the group I'm talking about - keep in mind that Hololens is an AR (augmented reality) device. Also, someone made this if nothing in the video above convinced you:
Price - $3000. Have fun. And no, that's the right number of zeroes. I checked twice.


THE QUAKECON GOODNESS - NEW GAMEPLAYS FOR PREY (!) AND QUAKE (!)
Okay, you pissed yourself now? Then go and change your pants. Why am I not going with you? Because I wore a f*cking diaper before even trying to watch them.

Okay, but seriously now - After E3's trailer people could only wonder about what the Prey will really look like and right now we get the big chance to see it in action. Shame we didn't get a revival of "Prey 2" idea/formula and instead got a lovechild of Dead Space and Bioshock. Still, I think it won't be a bad game per se. Let's just wait until release.

And Quake? Well...case is the same. E3 gets a teaser, leaves people wonderin' what kinda game it'll be. Of course we did get some contradicting information at the time (hurr durr back to the roots, but with not-so-root-features). Anyway, prepare for rocket jumps, UNLIMITED AMMO, the badass announcer and the most important thing - 120Hz goodness.

Thaaaat's it, thanks for reading. See you on Monday, folks.