It’s football, not soccer. Now that I have single-handedly put an end to this everlasting debate, let’s talk about the beautiful game and Soccer Story, the latest title from publisher No More Robots. With perfect timing to go as a companion to FIFA World Cup Qatar 2022, this is one physics-based RPG that football fans will love, as it seamlessly blends an engaging tale of underdogs with the joys of kicking a ball around, tackling everything and everyone, and mercilessly showing some toddlers who dominates the pitch. But it’s also a great adventure for those who don’t have a big passion for football.

The Legend of Soccer Inc. 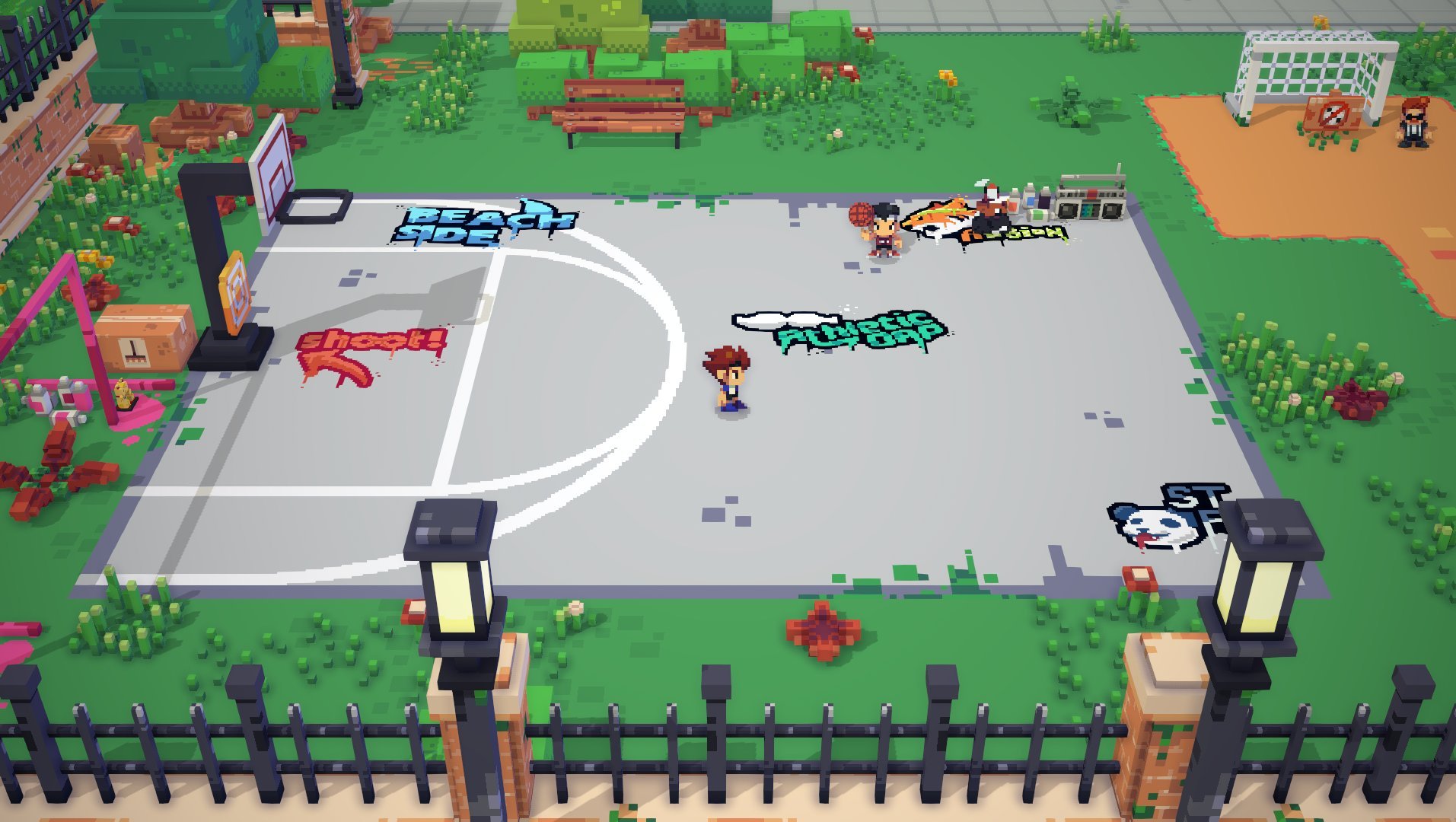 Soccer Story is remarkably presented as a retro-styled RPG, with visuals harking back to the days when 2D Zelda games were the reference in the genre. There’s an enchanting identity to this world where a calamity banned soccer from the face of the earth, or close – Soccer Inc. has forbidden everything that remotely looks like football, even the ball itself, apart from their very own official tournaments. This is a dystopian world of a new kind, one that looks charming and innocent, but the bad guys are bad nonetheless, even if it’s all about football.

One day, this football-loving kid is bestowed with the visit from a magic ball. This is how your adventure against corporation Soccer Inc. begins, tearing down barriers and asking the denizens to reignite their love for the game, bringing back football, one player at a time. It’s a diverse world filled with many faces, most of them with a task or two for you to accomplish, from the main storyline to the side-quests. Score some shots in hidden goals, find hidden ticket stubs, discover a way to break into a care home, tackle sandcastles, and much more – this is a rich world with plenty to see and do, and many activities will require the use of your brain matter as well as of your trusty ball.

While exploring the land, you will find many challenges. With the ability to summon the ball whenever and wherever you wish, there’s great potential for fun random kicking, but most of the time you will be aiming at targets and performing some nifty movements, from dribbling in timed courses to passing a ball around between team members. A free aiming feature allows you to accurately kick the ball, so you’d better nail down this technique before shooting for higher ground. 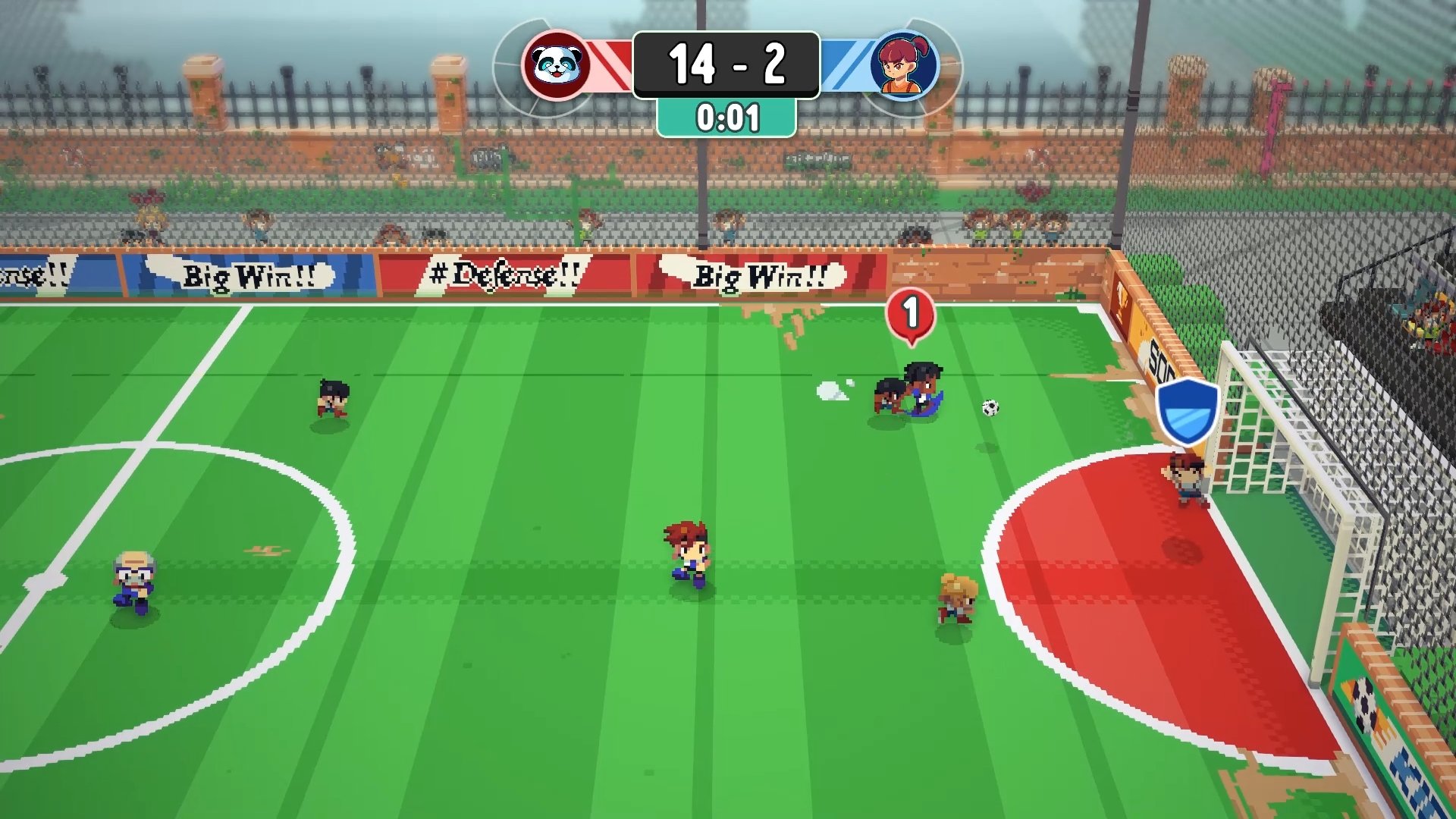 Not everything works perfectly with the aim feature, as you will see in some of the events. It’s hard to accurately shoot a ball onto the head of a dangerous shark, as it steadily and ravenously moves in the direction of poor, innocent kids – don’t worry though, no pixel kids were devoured in the making of this game. Sometimes frustration sets in, and you’re likely to put down the controller to take a breather, or simply wander off in search of other activities until you muster the courage to return.

Your character comes with a series of attributes that you can expand by using upgrade medals. You can get medals by completing missions, or trade them for the coins you discover in your journey. Upgrading your speed, strength, shooting, and energy is crucial to rise to some of the challenges, as your limitations may prevent you from doing the bare minimum, such as reaching an obstacle in a higher location.

The story will steadily take you through various regions, often cutting your progress short with the excuse of not owing a special pair of boots – sand boots for the beach sand or swim boots for swimming, among others. Other times you must face a few teams in actual football matches, something that turns out to be the other side to Soccer Story, and quite a ferocious one at that. 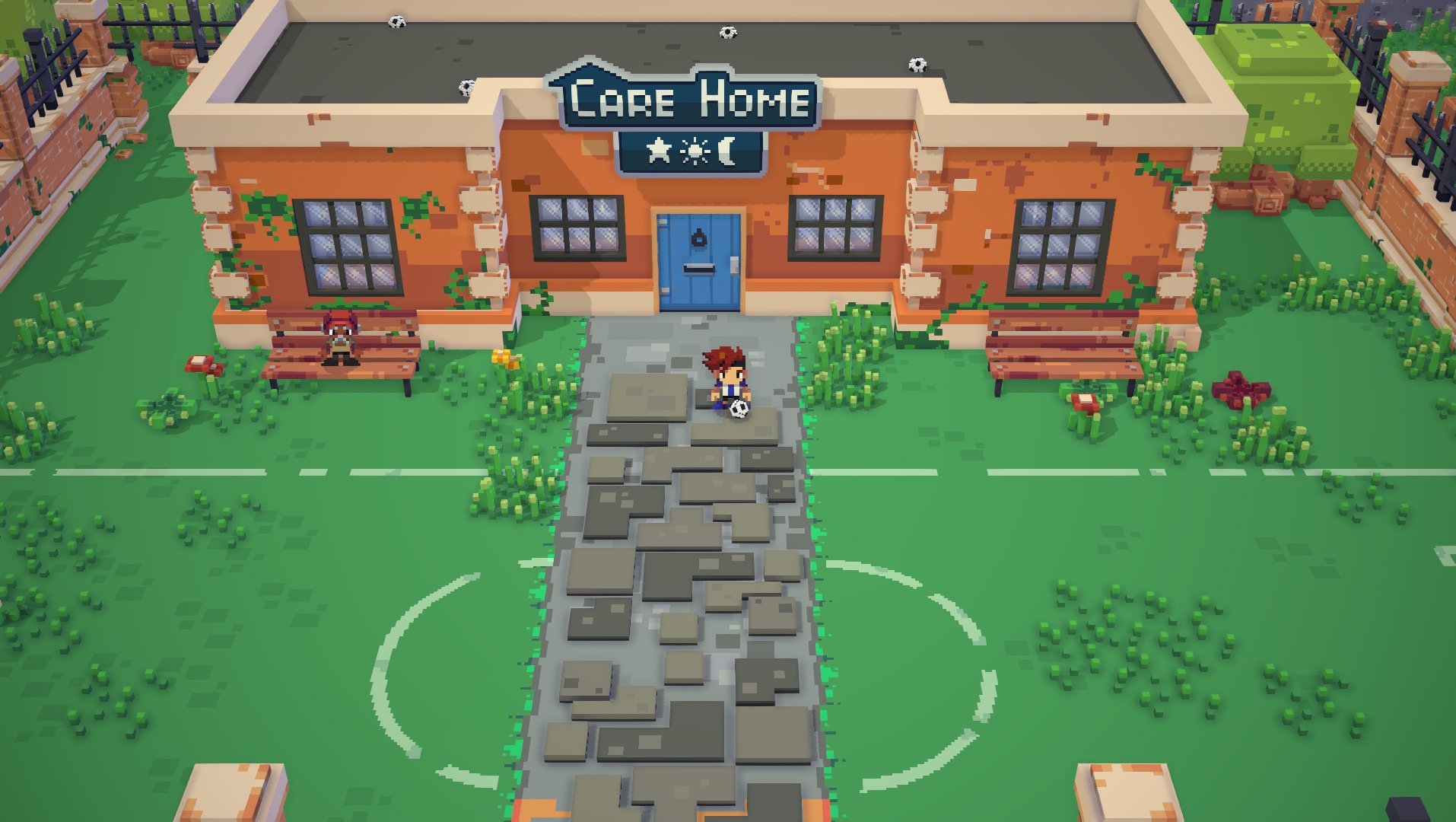 Words can barely describe the chaotic fun to be found in Soccer Story’s football matches. Playing against teams of toddlers, old folks, sharks, and more, this is a throwback to football games of old found in 8-bit consoles such as the Master System; it’s Brutal Sports Football without the gore, Mario Strikers without the princesses. Despite putting gameplay and enjoyment front and center, Soccer Story looks great in its pixel art style, so you’re going to enjoy the details on the characters and the field.

Don’t go in expecting terribly deep mechanics, but you can count on some fast and furious matches. During the story mode you’re going to make great use of your newly upgraded attributes to overcome your opponents, from additional sprint energy to shooting power. Unfortunately, you won’t be able to use free aim in match mode, so most of your shots will be based on sheer brute force, until the rival goalkeeper is tired of making saves and his performance drops like a rock.

There are some limitations to wrap your head around. For example, there’s no way of getting inside the goalkeeper’s area, this invisible wall stopping any player from going in there. The ball never exits the field as well, so you can expect and even take advantage of some rebounds to trick rival players. 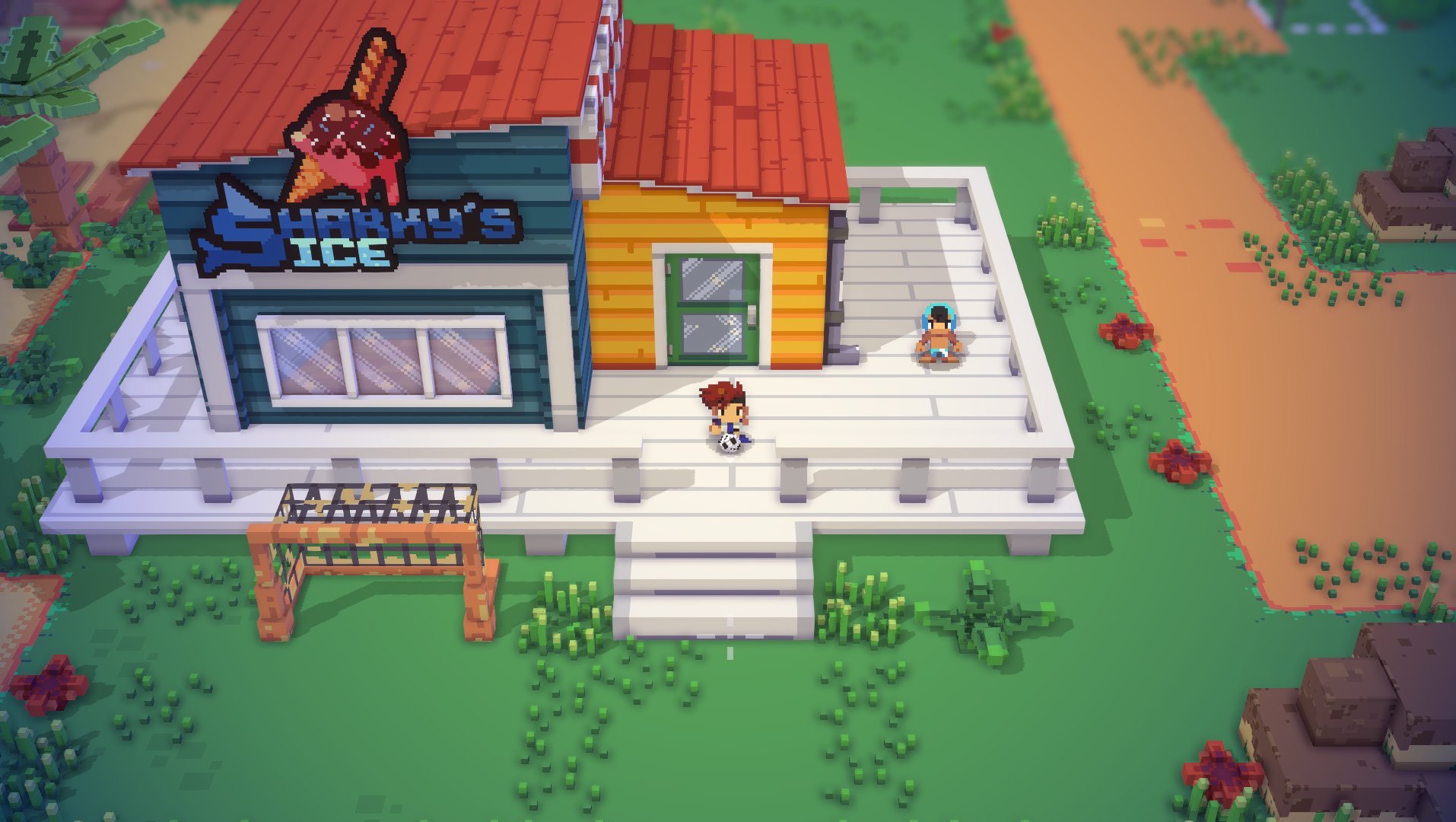 But the best of it all is that there are no fouls, as the referee is probably enjoying a nice tan at the nearby beach. While you can steal the ball just by getting close to a player, tackling is an effective way of making sure that your opponent won’t be back into the fight for a second or two.

You can dive into football matches straight from the main menu. These can be played solo versus AI, or in local multiplayer up to four players. Choose one of the eight available teams, each one with an animal captain, pick from a selection of kits, and you can even choose among five different pitches, one of them on the beach. Rival teams have varying degrees of quality, so you can pick the challenge that you feel suited for you in case of going against the AI.

Matches in Soccer Story are a supercharged tackle and shoot festival, each clash a frenzied display of humiliation with scores that can easily reach the 15 goals if you’re skilled and playing against the AI.

Top of the League 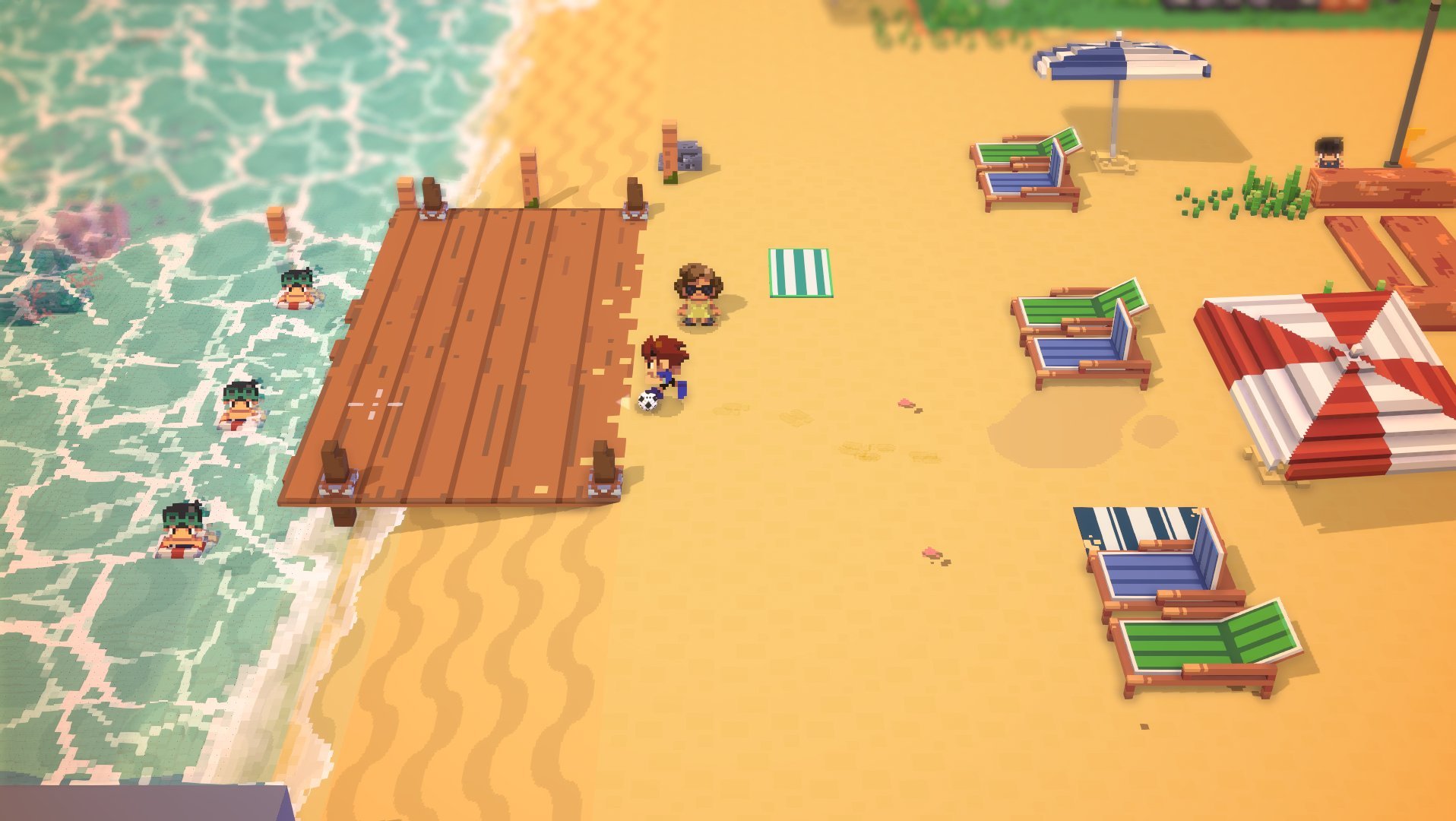 Soccer Story is such an enjoyable RPG romp that it made me feel like a kid again, remembering the times when I was playing a few football matches with friends and hanging out in real life. There’s a whimsical feel to this neatly designed world that acts as your playground, filled with mini-games and side-quests that successfully steer you off the main path, but always to your enjoyment – you can even fish if you want to.

Fans of retro RPGs and football alike are in for a treat with Soccer Story. This is a fun old-school adventure with a focus on physics-based challenges and a standalone match system that will easily make for hours and hours of frantic multiplayer joy.