Fenomenal Witcher 3: Wild Hunt delivered us an unforgettable end to Geralt's adventure with Blood and Wine expansion, and we dedicate this dose to the humble beginning of the Witcher series. And no, it's not what you expect.

After The Witcher 3: The Wild Hunt , I think it's safe to say that today, a wide circle of gamers is familiar with Geralt and The Witcher series. Although many may not have played it because it is simply not their type of a game, surely everyone is at least aware that he even exists. And that he is important. But something that many did not know and even the big fans of The Witcher is the fact that before the first Witcher was the first Witcher, that is, at least it should have been ... if you can understand what I'm trying to say.

Allow me to explain.

Prior to the legendary The Witcher from the CD Project Red, there was a different Witcher title being planned by another Polish development studio - Metropolis , which is also credited for the translation of the game from the Polish word  Wiedźmin . The founder of Metropolis in 1996 was Adrian Chmielarz , who founded the People Can Fly studio (Bulletstorm, Gears of War, Painkiller) in 2002, and his signature today can be found at The Vanishing of Ethan Carter . It was six years before CD Projekt Red was established at all. All the merits for fresh knowledge of this old project go to the Eurogamer team who last year decided to contact Chmielarz and to grasp the information that no longer exists today, except in fictitious archaeological museums.

Adrian Chmielarz knew Mr. Andrze Sapkowsky , the Polish author of the popular fantasy novels of the Witcher world, and there was an inevitable agreement on the adaptation of his novels to a video game. It was an action adventure with, can you believe it - RPG elements! These elements should have been mostly moral choices in dialogs, and the game is entirely planned as a more linear experience that would recount the actions from the books themselves, versus the open Witcher as we know today with a whole new story. Their whole approach to the project was unique in the fact that the game was intended for the primary adult audience, which was not as normal as it is today.

The three-dimensional environment and graphics itself were pretty impressive for their time, but the project's interest in the development studio was slowly dropping out as the team was not too sure of its potential success. In the meantime, other projects were given the advantage, and Witcher  was simply left on the shelves to collect dust, and so all the data stored on CDs is lost today. The only evidence of its existence is a few screenshots released in some random Polish newspapers, so take this opportunity to figure out how the Witcher series could develop today. 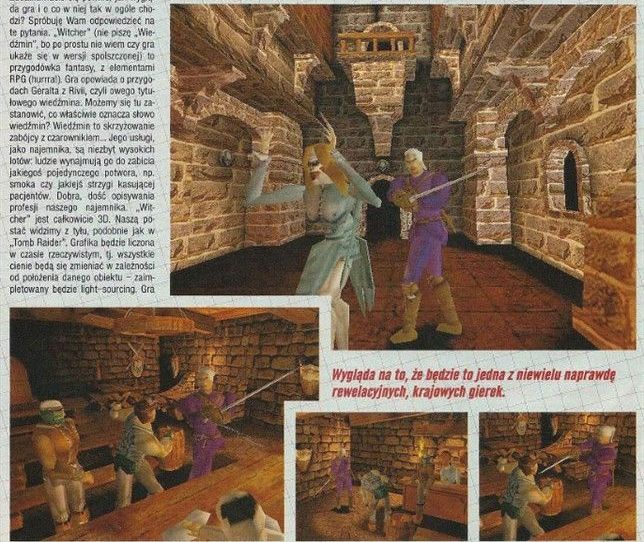