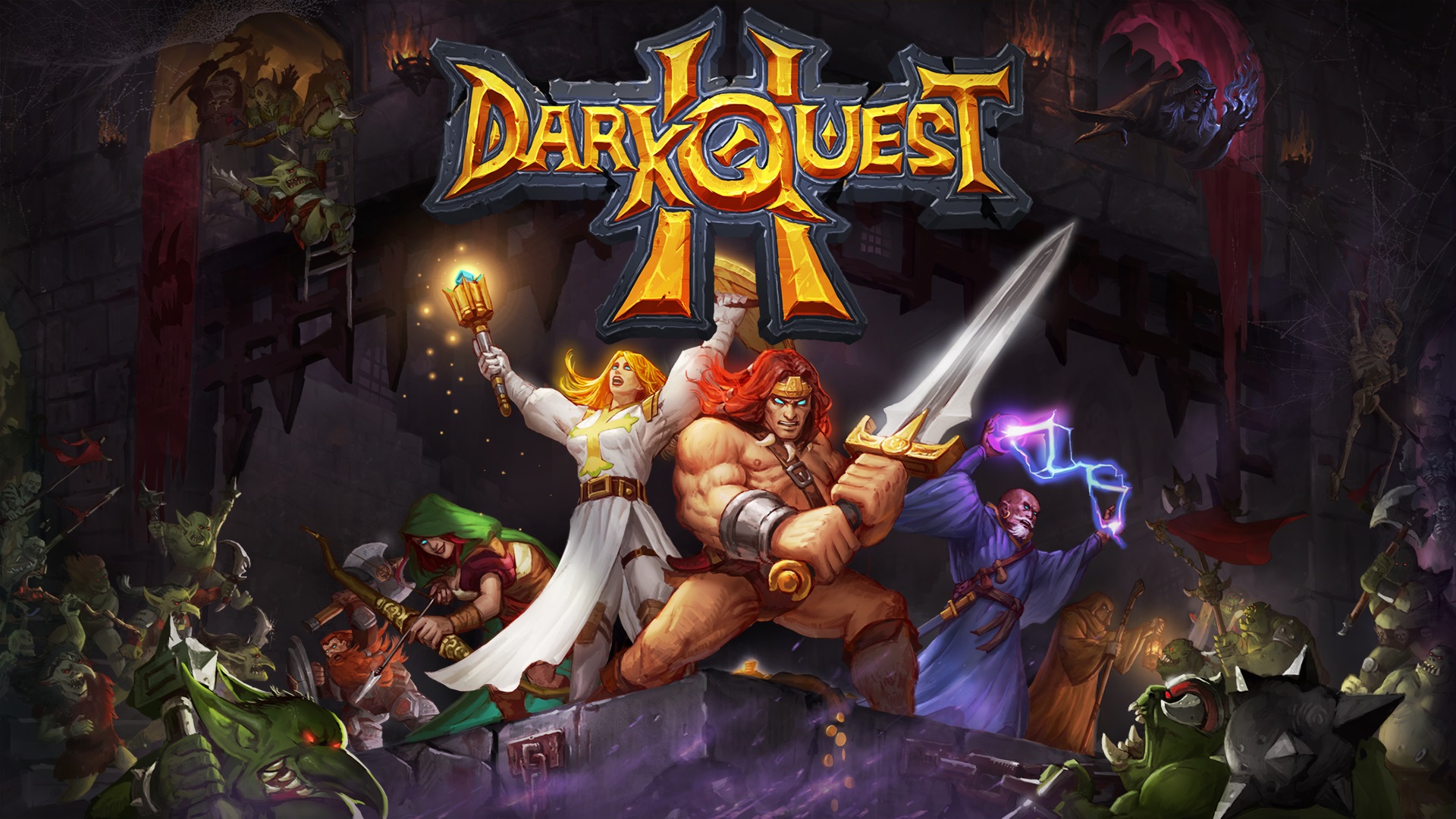 Who knows? Maybe all these orcs, goblins, werewolves and undead creatures my team has cold-bloodedly murdered on their way to the not-so-grand finale all had their feelings, fears, dreams and hobbies? And maybe that "Evil Sorcerer" was in fact a friendly old man truly concerned about the raising of kids these days, wanting to run a campaign aimed to encourage them to read more books? You have nothing to rely on, but your own imagination when dealing with a story like the one presented by creators from Brain Seal Entertainment in the sequel of their turn-based RPG. Once you hit play and enter your name, the game tells you something that can be summarized as "Yo, some old man has settled down in the king's castle. Go waste that joker." - then goes silent until the ending. The main campaign consists of 28 missions and while some description is provided for every one of them, I assure you that you need not bother to read any, cause the drill for most levels is "go explore some dungeons and find the exit". 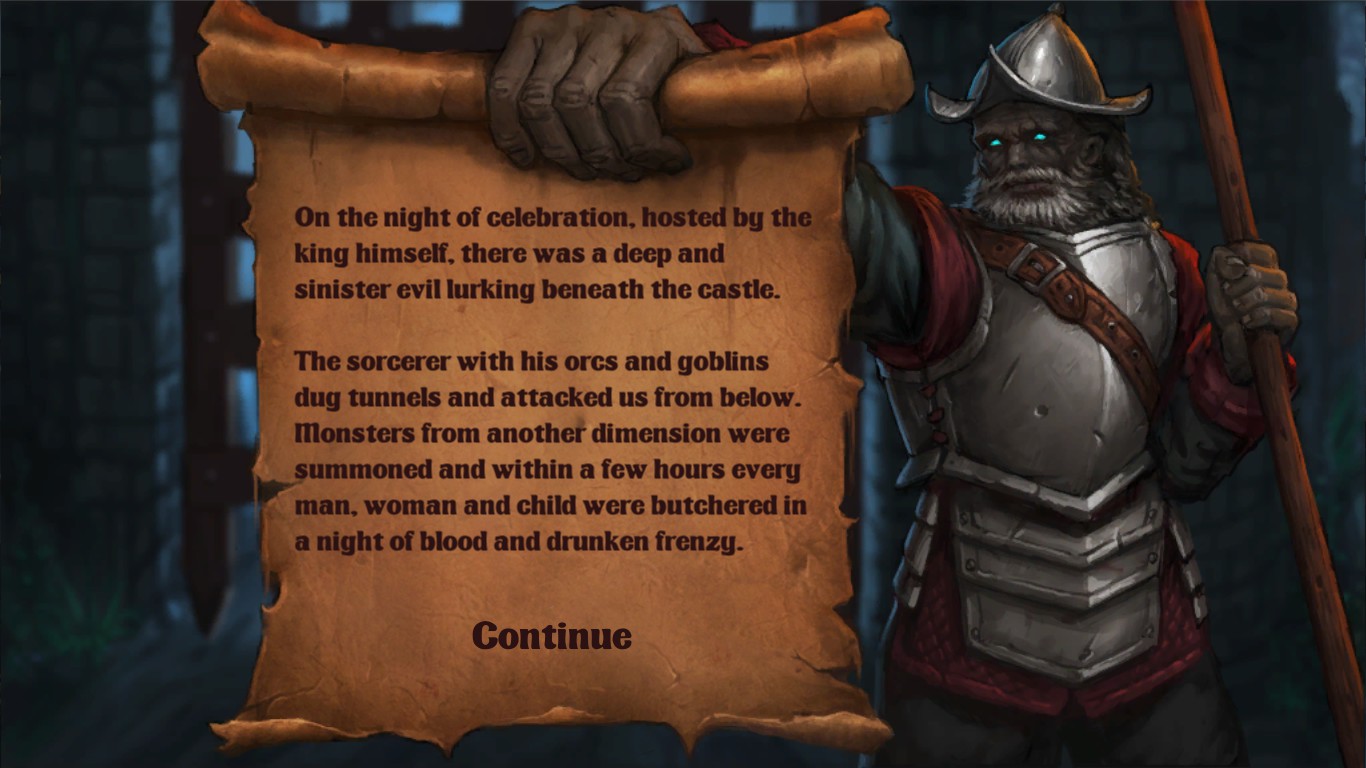 This letter contains virtually all of the game's plot. Just read it (or whatever) and don't ask any more questions.

Speaking of exploration, some games are able to make it addictively fun, but not this one. The game world is all along visually unappealing dungeons that never catch your eye with anything new and you could say that this is the way the game's ambience should be, but then why is everything else drawn with such an exaggerated cartoon-like style and strikingly saturated colours? The village where we can prepare our team for the next mission is in fact the only place worth looking at even though it is not a full-fledged location. The enemies, having been designed in the same manner, look so friendly that it's heartbreaking to bring death to them. Heartbreaking, but fortunately not very cumbersome, because combat in Dark Quest 2 was implemented fairly good except a minor inconveniece when I wanted to get one of my characters closer to an enemy, but, because its path crossed a room transition field, ended up sending it to the previously visited room, which resulted in losing that character for the whole combat. Unfortunately, there's not much to do, while we aren't massacring hordes of innocently looking orcs - we'll mainly be collecting stuff lying around: gold, gems (which means click it away to the merchant for more gold) and magic pots, which serve as learning points to spend on our characters' skills and abilites. 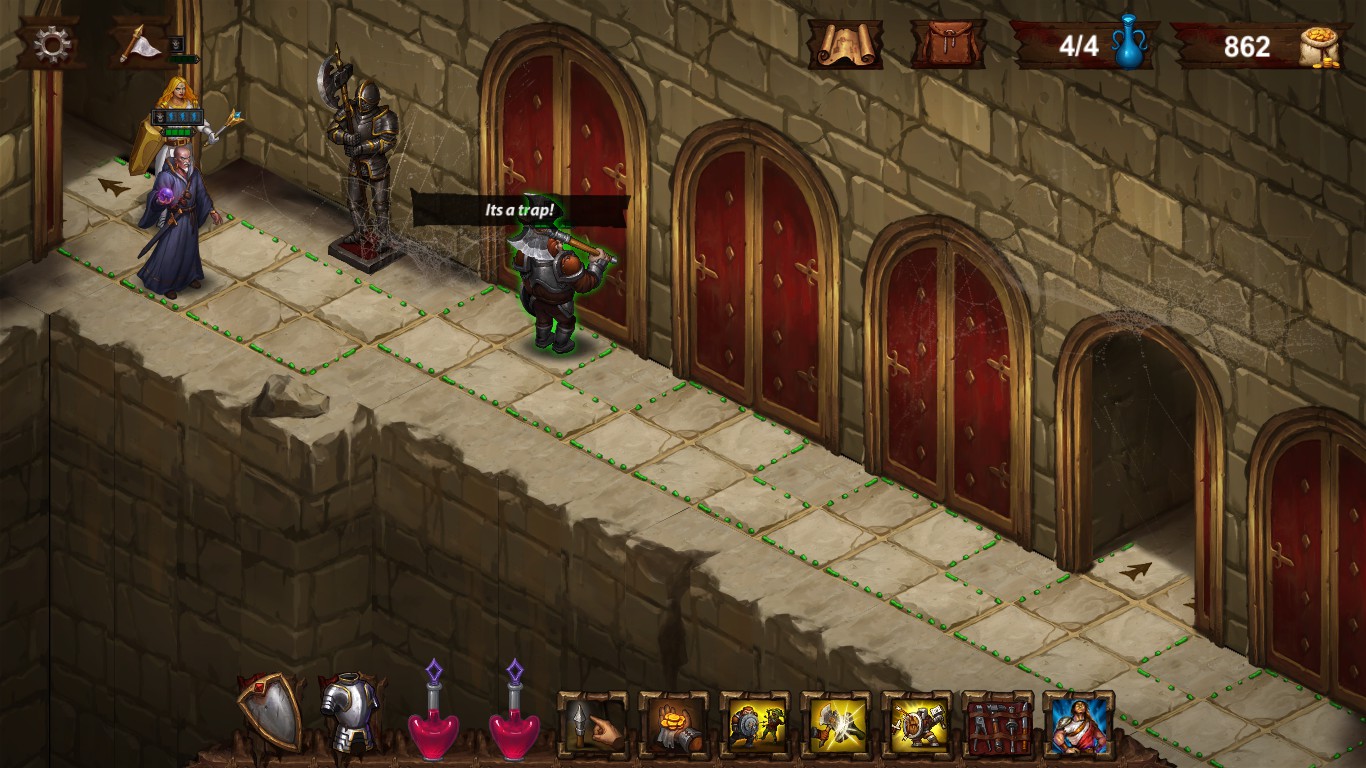 Watch your step - not only because of the traps.

Despite this peculiar character development system, the skill sets and equipment are in fact one of the few strong sides of Dark Quest 2. The way certain skills are affected by equipment and other skills causes players to be rewarded for reading each description carefully and spending collected magic pots in a thoughtful way. For instance, the Dwarf can be taught a projectile deflecting perk which, together with an equipped shield, makes him a certain death for all enemy archers while just standing in front of them. However, what deserved my disapproval was the way this game deals with equipment. Anything you do with it goes through the blacksmith. You can only equip and unequip your characters at the blacksmith. Every item must be "crafted" (but, in fact, purchased) at the blacksmith. None of them can be crafted more than once. You don't get to access unused items from the inventory. Even though there is an inventory, you might as well never look at it, seeing that it features nothing but gems, which you'll just mindlessly sell, and artifacts, which affect your whole party whether you want it or not. The same goes with potions. No use has been made of the aforementioned inventory screen to let the player hoard as many potions as they see fit. They apparently can go nowhere, but to the characters' pockets, since they can all carry only one or two pieces. Moving potions between characters is not possible. The fact that the Brain Seal programmers don't recognize double clicks and keyboard shortcuts is truly deplorable as well. Do you want to equip your character with an item? Drag & drop. Select a party for a mission? Drag & drop. Learn a new skill? Drag & drop. Recruit a new character? Drag & drop. Resurrect a character? You've guessed correctly - drag & drop. The entire game is controlled with just a mouse, but I really want to believe that it wasn't also coded with just a mouse. 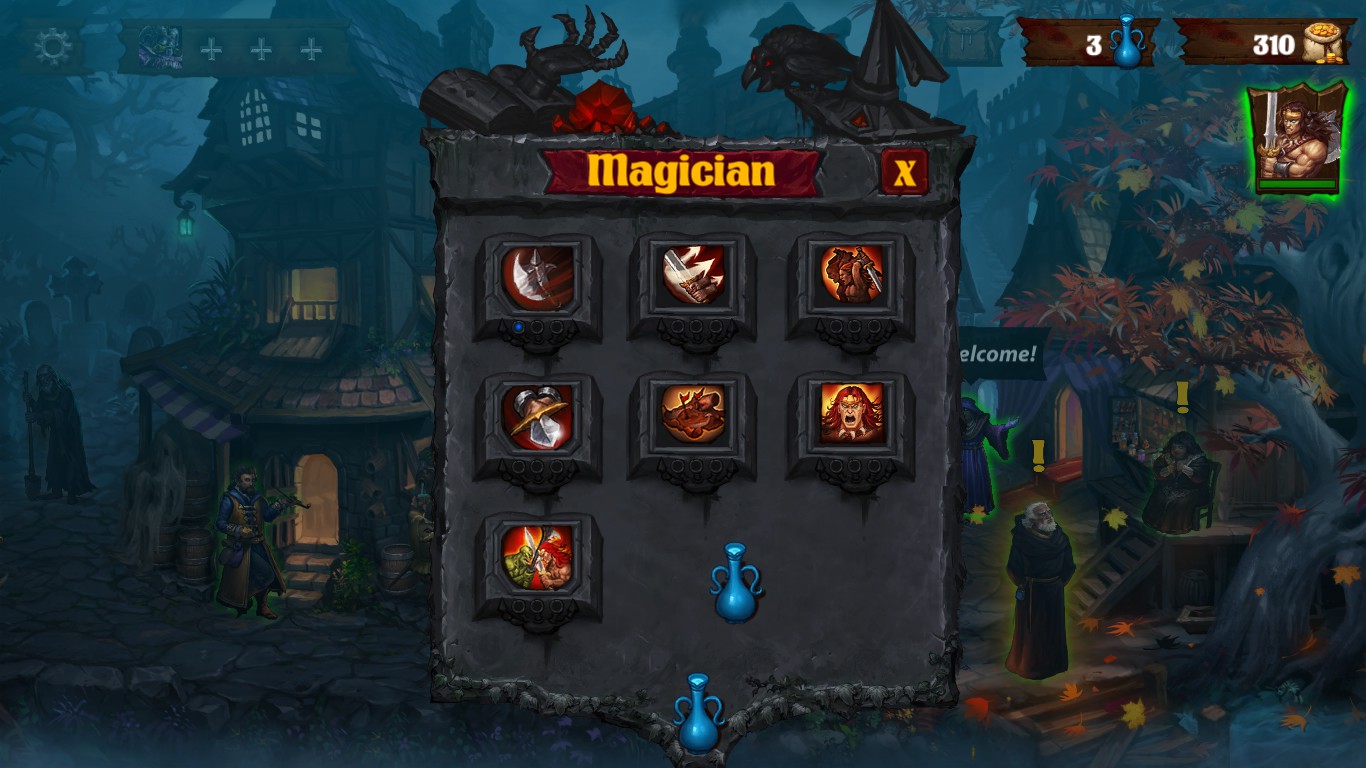 Here we go again with the drag & drop job...

While the soundtrack of Dark Quest 2 doesn't sound abysmal, it makes an impression of something designed to stay in a listener's head rather than enhance immersion. I don't hate it, but I feel my game experience could've been much better if it wasn't for that. 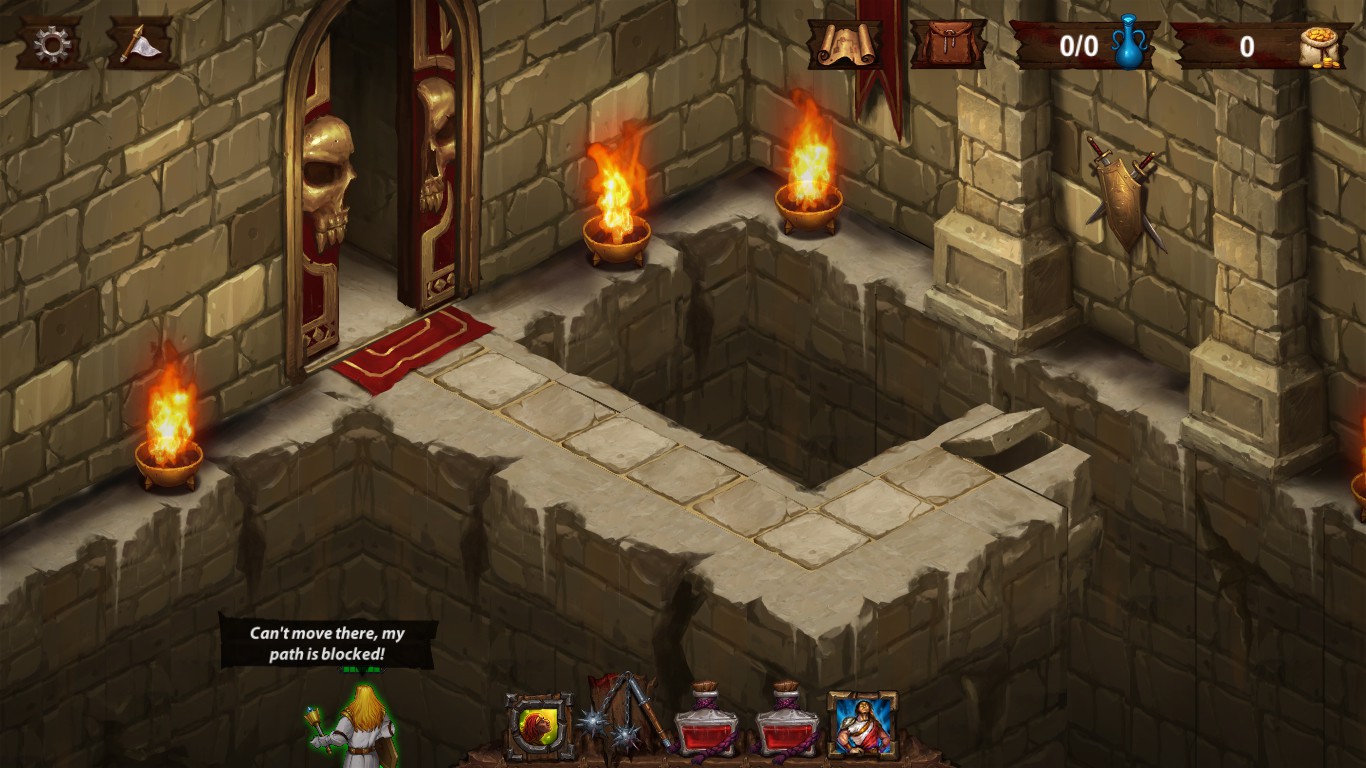 For a game sold on Steam for 8 bucks, Dark Quest 2 has a considerable amount of game text brainfarts and other visual faults. At the blacksmith, you may find out that some of your items are already "equiped". At a certain gate your party member will perceptively state that it "onced" protected the king. A magic pot for whomever can figure out what "brethens" means. The village Elder advises you that you'll never understand any advice (sic). Some numbers and texts are written in a font looking like something out of OpenOffice, that simply doesn't belong in a fantasy RPG. Also, good luck reading them if they overlap with a similarly coloured element of the environment. And if they get cropped out by black stripes that show during every dialogue - don't worry! It's not like a thrilling story's being told there anyway. 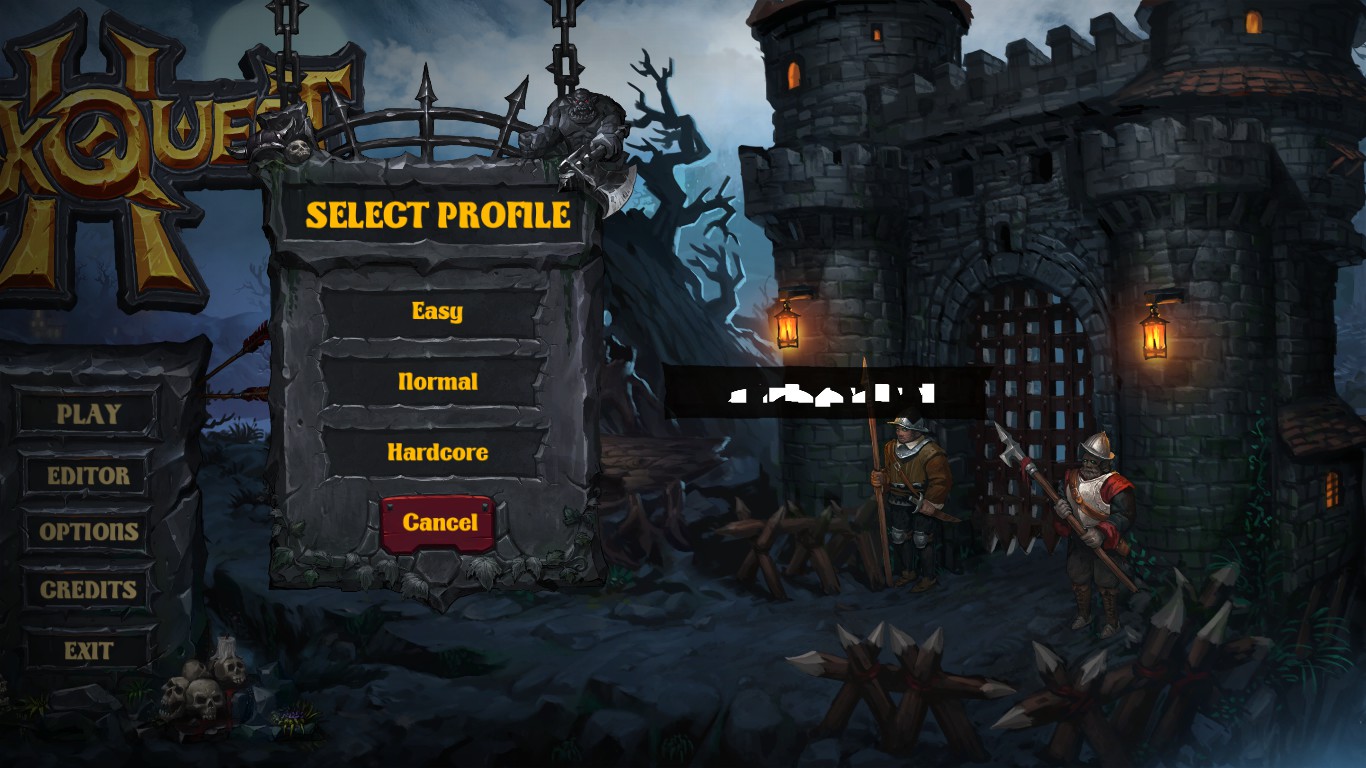 The main campaign on the normal difficulty level can be finished in as short as 10 hours. That time can be extended with community-made missions from Steam Workshop, but I don't see a point in doing that other than more gold, gems and pots which, at this stage, you might not even need. For the same reason I'm far from wanting to get accustomed to the editor's interface, which is more hardcore than the actual game. Supposedly, you can also invite your Steam friends in-game for a cooperative run, but I figure that if I tried to talk my friends into getting this game for a full price, I wouldn't have friends anymore, so again, Brain Seal, thanks for nothing!
Don't think I hate Dark Quest 2 in its entirety. How many games do you know where a brothel isn't actually a gold-consuming black hole? Here you can spend some gold to have a hooker take care of your character and buff some of their stats for a single mission. The practical and the pleasurable combined! Boss, can I get a week off? I need some bonus stats for next Monday.

Pros:
+ Quite satisfying combat and character development
+ The game is, without irony, an eye candy...
Cons:
- ...as long as you stay at the village and sightsee
- soundtrack that overtime gets wearisome
- uninteresting and poorly told story
- many little bungles that could've been easily corrected - made the game feel like it was made in a hurry
- lazily implemented controls
- disappointingly short playtime
- questionable or sometimes even plain stupid limitations, e.g. equipment
Graphics: 6/10
Sound: 4/10
Story: 1/10
Playability: 7/10
Overall: 4/10
It's a "nay" from me. This game is 8 dollars on Steam, but feels like something bundled with a children's mag. Get it only when its price starts with "0.".