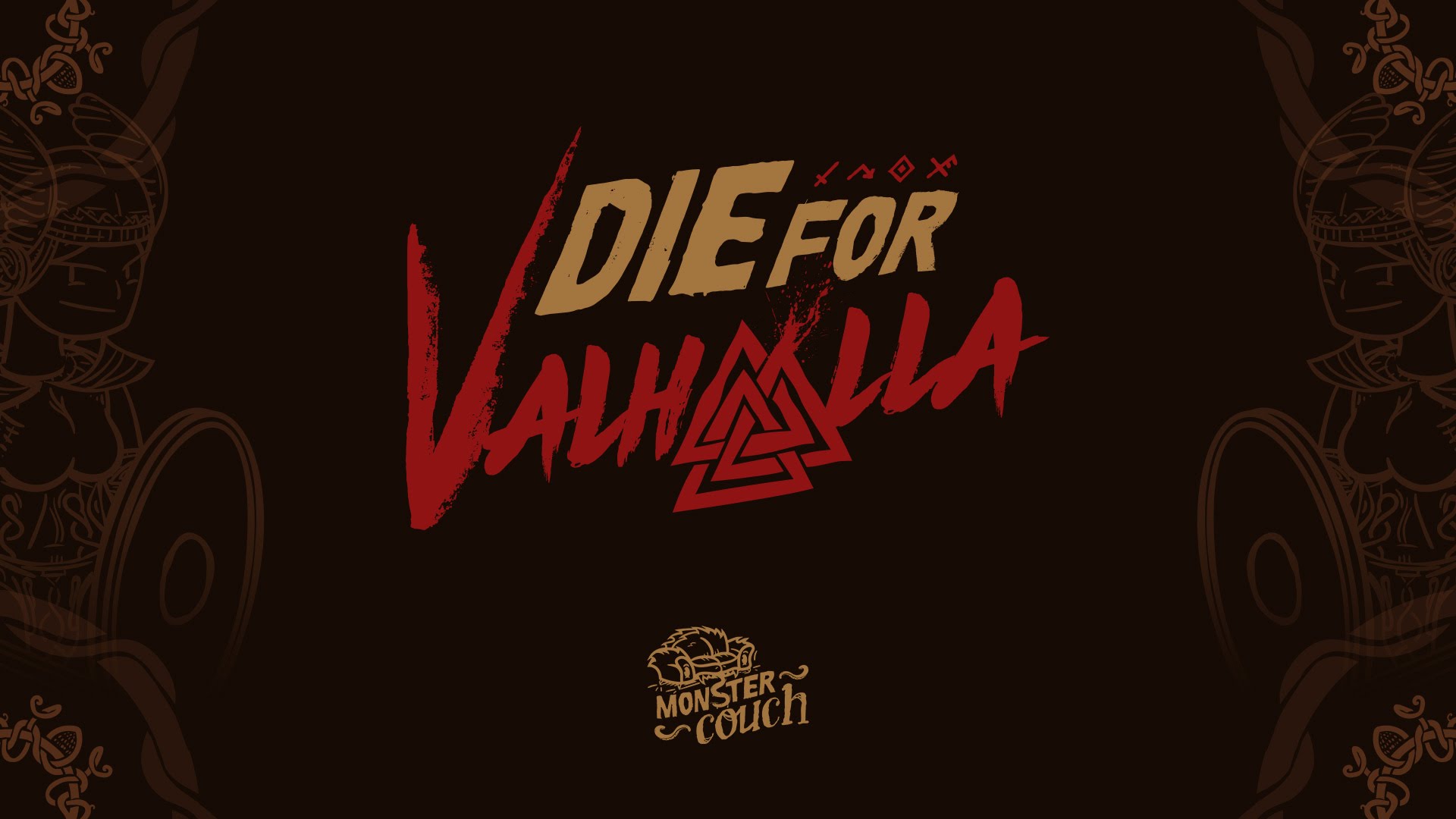 What do you mean I can play only as a female?!

Trying to keep up with the amount of goofy humor in Die for Valhalla! might be a way tougher nut to crack than explaining who we're actually playing as, so this quasi-sexist intro will have to do. While I do believe there is a place in videogames for good jokes, bad jokes as well as full seriosity, I can't get over the fact that the guys from Monster Couch didn't find place for a coherent narrative to the story their game tells. Even though the animated sketches where the game would make fun of its own mechanics have found a grateful recipient in me, there was also a story going on during the campaign, that I couldn't quite follow because of them, which I didn't realize for roughly two thirds of all the levels. The game's plot consists of nothing but one moderately exciting twist what would be an issue with a point-and-click type of game, but in Die for Valhalla! you mash buttons, not ask questions. Monster Couch devs serve us a classic, beat-'em-up-style gameplay, where I guess there was virtually nothing to botch and that would place Die for Valhalla! on the "Play to take a break from gaming" shelf. There is, hovever, one thing that makes the game stand out, which reminds me I owe you an explanation about who you're going to play as. So, imagine you're a valkyrie, therefore, technically speaking, a ghost, but you were summoned into the mortals' realm where you can die like any other creature, but at the same time you can possess dead Vikings. You can also possess weak enemies, barrels, obstacles and surrounding flora, just because. Crazy? Perhaps, but who cares since its so fun? At least until you finish the main campaign and learn right afterwards that you have been doing the possessing thing like a newbie all along since there is a thing called "perfect summoning", which would allow a possessed Viking to appear faster. As much as I enjoyed the possession mechanic, I would like to see the faster mode be referred to as "turbo summoning" or similar, so I wouldn't feel so bad for not having learnt it before. Similarly, one of the loading screen tips says that "X+X+X+Y is a combo I can try out", but calling it a combo made me ask myself for the whole playtime if I there were more combos and I'm capable of pulling off only one of them, so the game has once again slightly disturbed me in fully enjoying it. 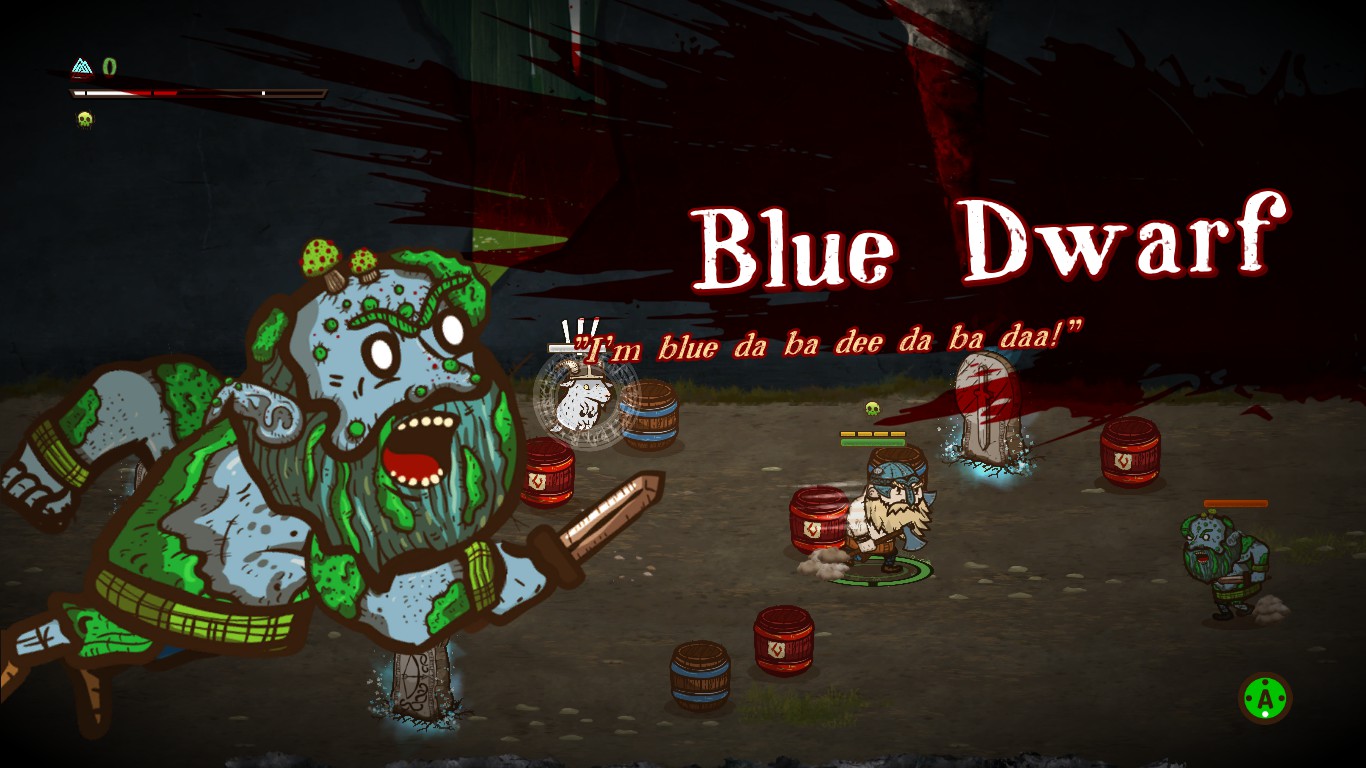 Just in case you have recently thrown a stupid earworm out of your head - here you go, thank me later.

Speaking of controls, the specs for the game promise a support for DirectInput controllers, apart from the Xbox 360 and PS4 gamepads, however, for my pre-Xbox-age controller, it only got responsive after controller-related shenanigans in the Steam client plus the in-game button references were all for an Xbox gamepad anyway, so the tutorial wasn't very much of use for me despite being quite comprehensive. Dear Monster Couch, your game is not compatible with these controllers - Steam is, so please update the specs accordingly. To add to this pot of despair, the keyboard bindings cannot be reassigned. It is not an awful thing that movement is set to good, old-fashioned arrows, but not everyone must like that and we're anyway stripped of the possibility to play as we want to. Another aspect that leaves us with effectively no freedom of choice is character selection and, for those of you who took the first paragraph seriously, it has nothing to do with all four available valkyries being female. It is rather that they are all the same character in four different colors. Their stats might be slightly different from each other at the beginning of the story, but, as the character gets developed, the growth of these stats gets overwhelmingly bigger than the original values. The fact that none of the four available valkyries have special abilities that would distinguish them from each other and linger for the whole campaign makes the choice only relevant if you really want to play a character in your favorite color. And okay, there might have been only enough budget for one character and players had to be marked somehow not to get their valkyries all mixed up on screen, but it still would make more sense to leave the players just with RGB sliders to adjust. I would be much more happy if I got to create my valkyrie by myself even if the editor was to be that primitive. Also, the fact that there are only three save slots available for the main campaign is a slap to the player's face considering the capacity of modern day storage devices. 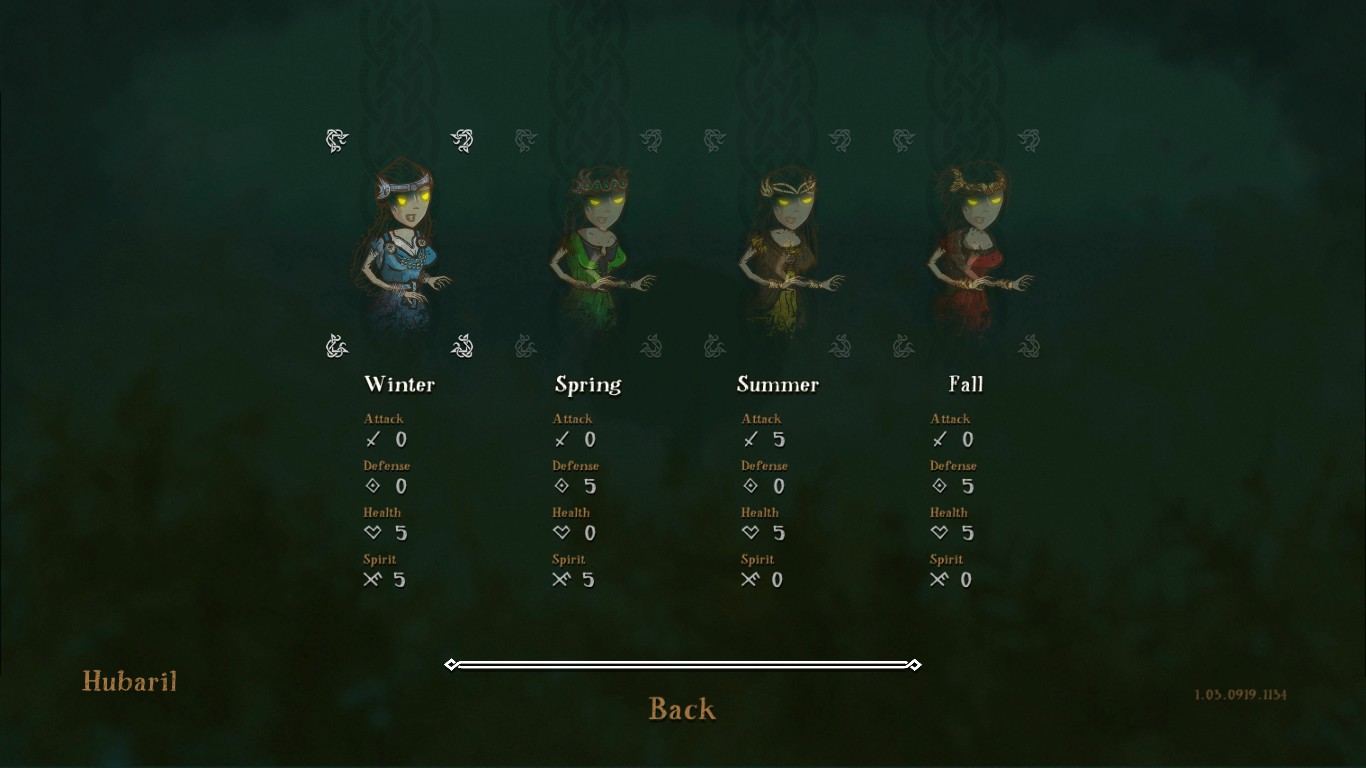 Names are to be earned through heroic deeds. It's not like we were too lazy to come up with ones!

Although the uniformity of the protagonists bug me a little bit, I still find Die for Valhalla! one of the most visually appealing things to have appeared on the screen of my PC in a decade or so. I know there is already a handful of games out there that utilize cartoon-like 2D graphics with caricatured, dwarf-sized characters, but this is not everything this game has going for it. The sense of perspective has been served by applying variety to the color palettes used for different layers of setting - the colors of distant landscapes are subdued while the ones of prioritized interest objects strike with their vividity. By putting effects of fluorescence on top of that, the designers were able to create an interesting contrast as well as manage player's attention at ease. Glory Orbs, which serve as sort of experience for the valkyries, are all made of this glowing effect which makes them look like out of a whole another dimension and causes the player to intuitively want to collect them. This way, the punishment for skipping the tutorial is minimized, so the practical meets the pleasurable, as I like to call it. Not to mention, the symbol of three intersecting triangles used in the game's logotype, Glory Orbs and other places I'm yet to discover, simply looks cool. The audio in Die for Valhalla! does its job for the most part, but also prove it's rather an eye-candy type of game. One can be greatly satisfied with the ding Glory Orbs make after collecting them and/or funny battle cries Vikings make after summoning them, which makes you want to do these things again and again. The game's soundtrack doesn't pierce the ear and fits the comically warlike ambience of the surrounding world, but some games had themes I keep humming to this day - this one doesn't. 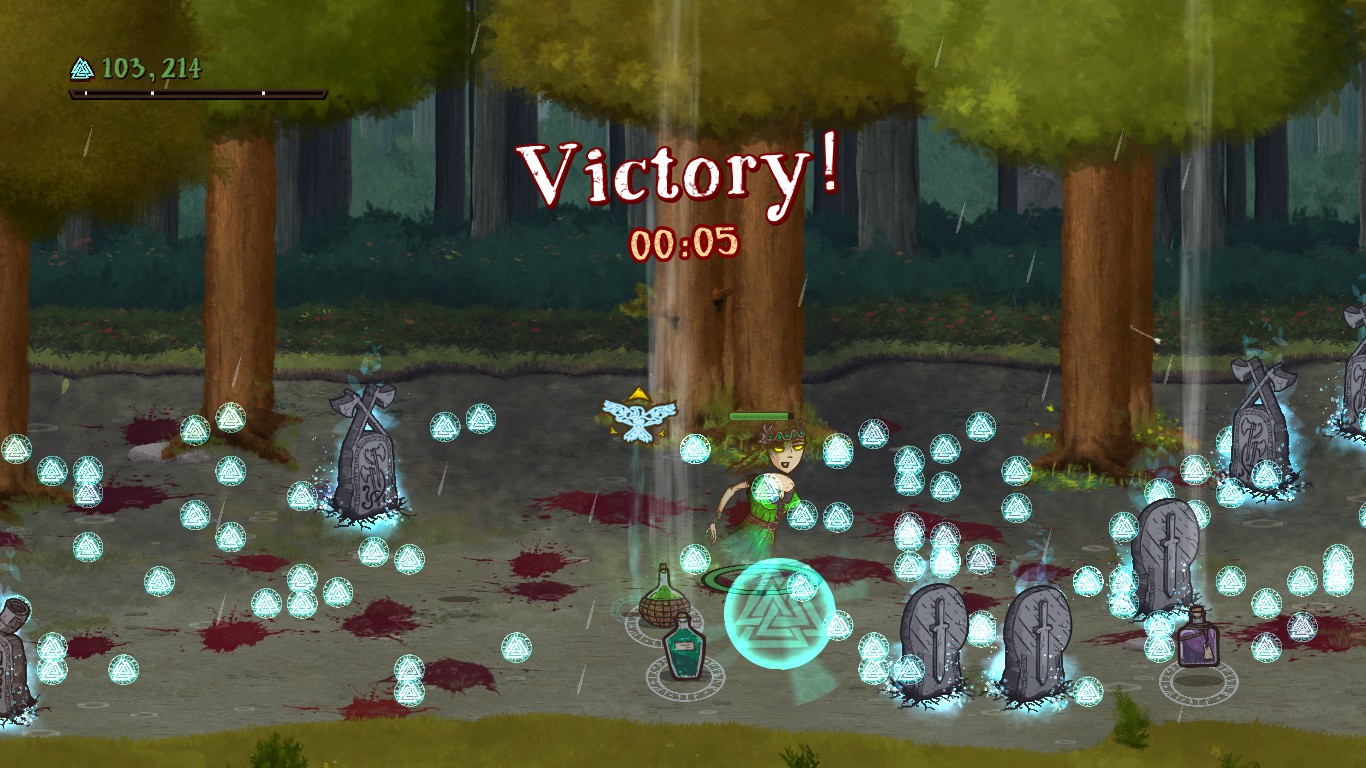 Rain of experience! I want my share if this becomes a successful indie rock album.

The campaign in the normal mode can be beaten in about 9 hours, but devs have also prepared for us a much harder and more intense hardcore mode as well as some quick challenges including deathmatch which is where I learned, after beating the campaign by myself, that all modes can actually be played by up to four players locally. My bad? No. The game should have somehow hinted the way to add more players. The deathmatch mode is exactly what its name says - up to four players fight against each other until only one remains. The simplicity of this mechanic makes Die for Valhalla! fit perfectly in the recreational category I mentioned earlier; after a quick introduction and having never played the tutorial, a friend I've tested deathmatch with could easily get a grasp of the game's controls (except the button that releases the summoned Viking, but that's a tricky one) and try out half of all the available Viking classes in one take thanks to the possessing mechanic, which, despite being seemingly a weird overkill, proved to have greatly increased the intensity of gameplay since you don't simply attack your opponents, but also prevent them from killing you in your valkyrie form by assuming a Viking shell. It might have not been that impactful in the campaign, because of a much lower rate of switching Viking bodies, but guys from Monster Couch have employed more tactics to keep the player busy. Controls tips don't pause the game and occupy the whole screen - they are placed right behind the training mannequin you, on which you can immediately try it. You don't get experience - glory orbs fall out of defeated enemies; collect them! When you beat a level, you don't get a useless congratulations screen - you get a rain of glory orbs; you know the drill! The character development is a whole another minigame by itself - the stat boost you get depends on how well you can connect the runes! All in all, it seems like the devs have squeezed every possibility to fully gamify every aspect of gameplay possible and the only regret is all that epic multiplayer action can't be done online. 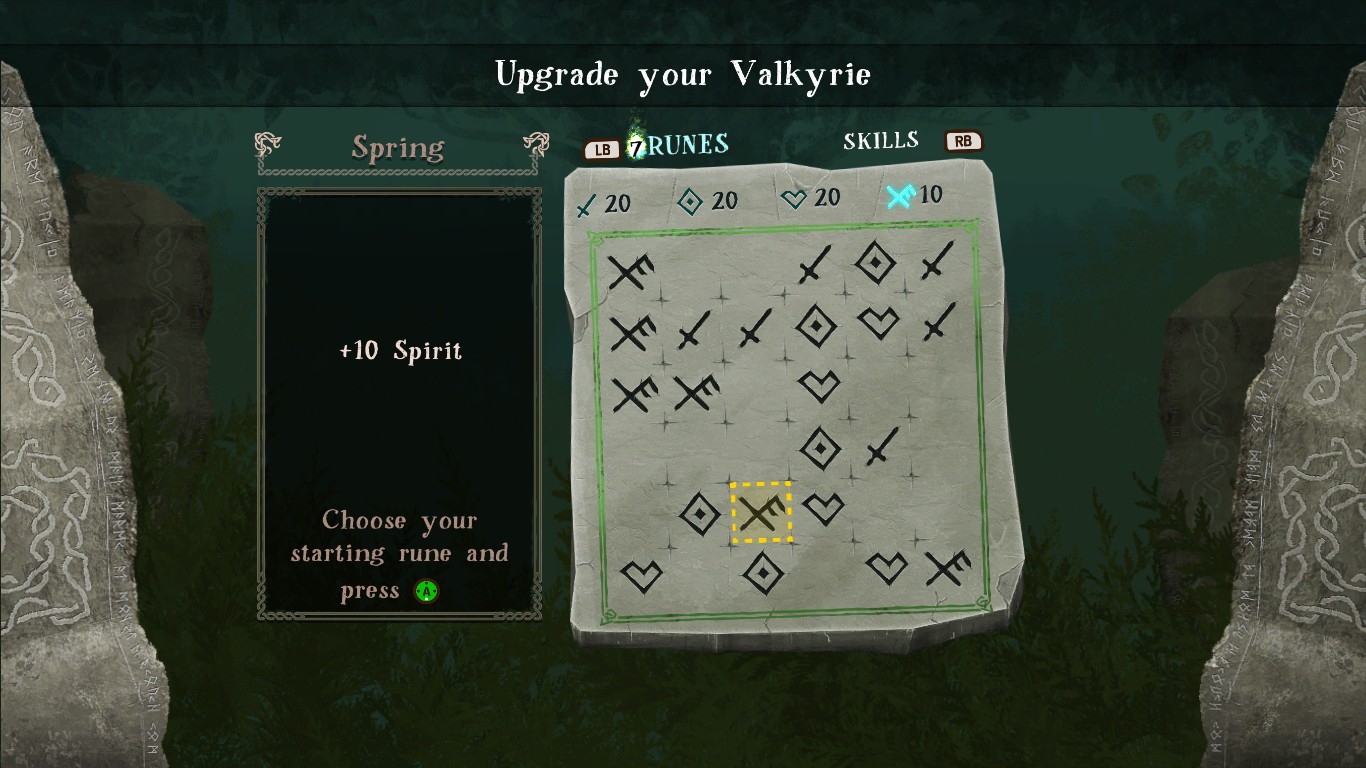 ...and choose it wisely unless you want to land on an empty rune and waste some of your experience!

Pros:
+ Effortlessly achieved gameplay intensity thanks to the possessing mechanic and others.
+ Possibility to play the campaign in cooperation.
+ Creatively implemented character development.
+ Enchantingly beautiful graphics.
+ The humor!
+ Insanely intuitive in some aspects...

Cons:
- ...in others quite the contrary.
- The story is a bit underwhelming and hard to follow.
- Character selection could have given us more freedom of choice.
- No controls settings whatsoever; game is, as many others, on the "XInput or bust" train.
- No online multiplayer.

12 dollars would be a fair price... if the game had an online multiplayer. Otherwise, buy it only if you have friends to chip in for it with, cause Die for Valhalla! is obviously aimed to be the game you pick up at a party and immediately have tons of fun in a short period of time without learning any complicated mechanics. If you're more of a recluse, like I am, then your buck is most likely better spent elsewhere.