Die a hundred and seventy-fourth time at the same chamomile flower in 1-6 and realize it’s not that stupid green cat’s life that’s been lost.

Does a high difficulty level immediately make a game bad? Definitely not - provided that it doesn’t give you a constant feeling that you’re wasting your time, which sadly is the case with Bloody Trapland 2: Curiosity - the shockingly second installment of a platformer game series developed and published by 2Play Studios. The developer is based in Sweden and this is a secret piece of information that will help us later.

At the beginning I said that among the things that can kill you there are chamomile flowers and I really don’t care what the devs want me to believe it to be - they did a poor job at convincing me otherwise, so chamomile it is. Designing deadly traps is clearly not the strongest point of 2Play, but you have to give them credit for knowing how to play to your strengths while naming your product - or rather strength in this case. What we’re talking about is blood. Every time your character dies, it bursts into a fading bloody silhouette, scattering trails (bloody, of course) around the place. If you die enough times, your blood will form a sort of torture-porn-themed street art. All that, combined with some again - bloody SFX is done quite neatly and makes me actually want to die as often as possible because A: I have no sympathy whatsoever for any of the dumb-faced feline Power Rangers I’m stuck with as playable characters and B: this game is all about dying anyway. 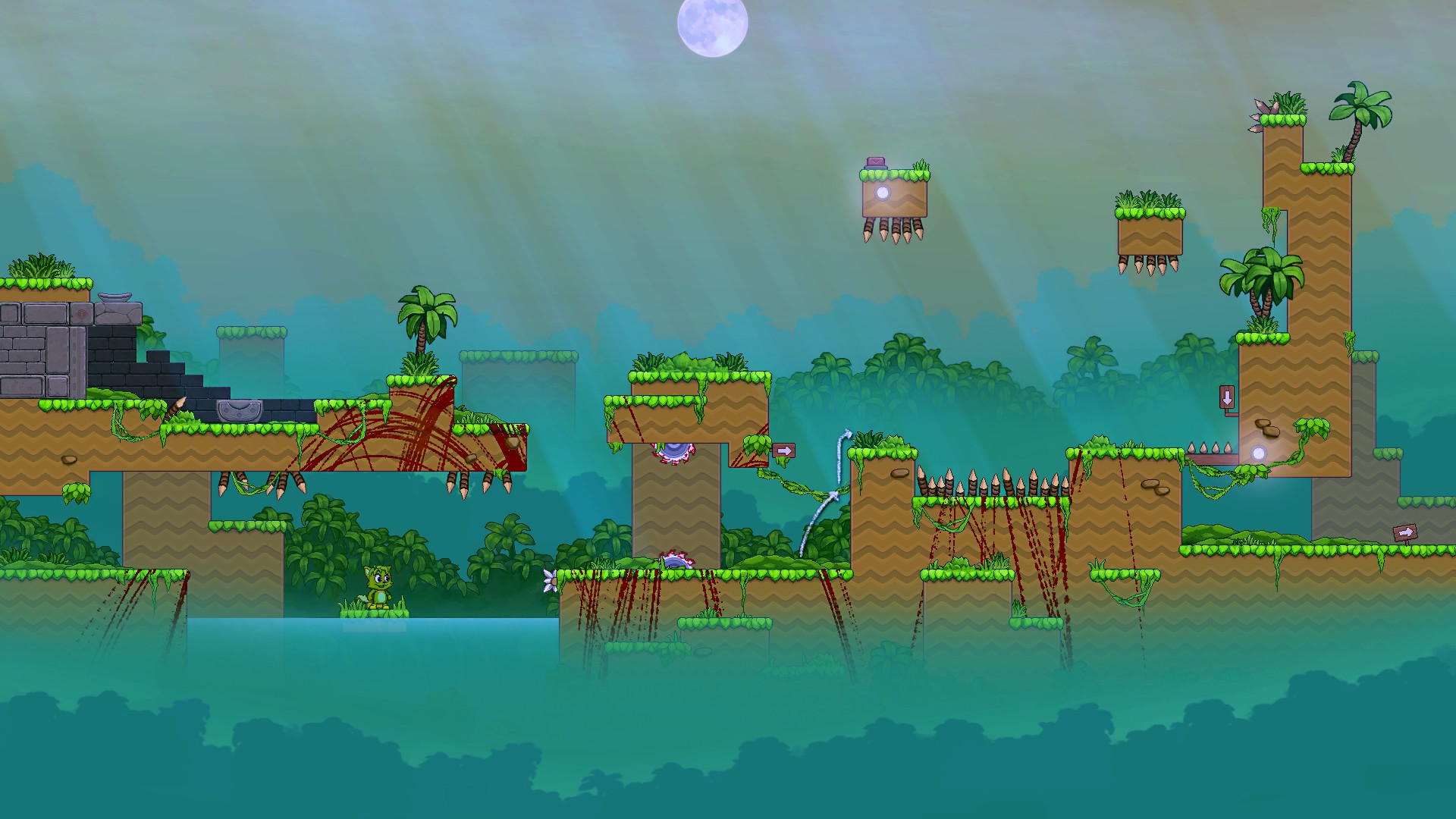 Imagine the bluescreen in my head when I tried to collect that flower hoping for some power-up.

The main campaign in Bloody Trapland 2 consists of over 50 levels and each one of them is one screen long - no side scrolling. The goal is to get from the left to the right side. So far so good. But wait, there’s more - you also have to be pixel perfect on every single single leap, dash and duck. To add insult to injury, sometimes you might come to realization that you have been doing a certain part of a level you can’t beat wrong all the time, hence fiftieth death in a row at the same trap. If you manage to figure it out by the tenth death, then good for you, but otherwise, congratulations - you just spend your weekend going right, dying on the same unbeatable obstacle and being sent back to the beginning of a level - repeated whatever absurdly large natural number times. Now I’m not saying games shouldn’t be challenging - in the Apocryph review I mentioned I actually smashed my mouse after a ridiculous number of deaths while trying to beat one of the bosses. But playing that game I also had the little thing called fun, meanwhile in Bloody Trapland 2 all the fun had been stripped away from me. A little bit of challenge is always a good thing, but sky-high difficulty is no excuse for bad game design. 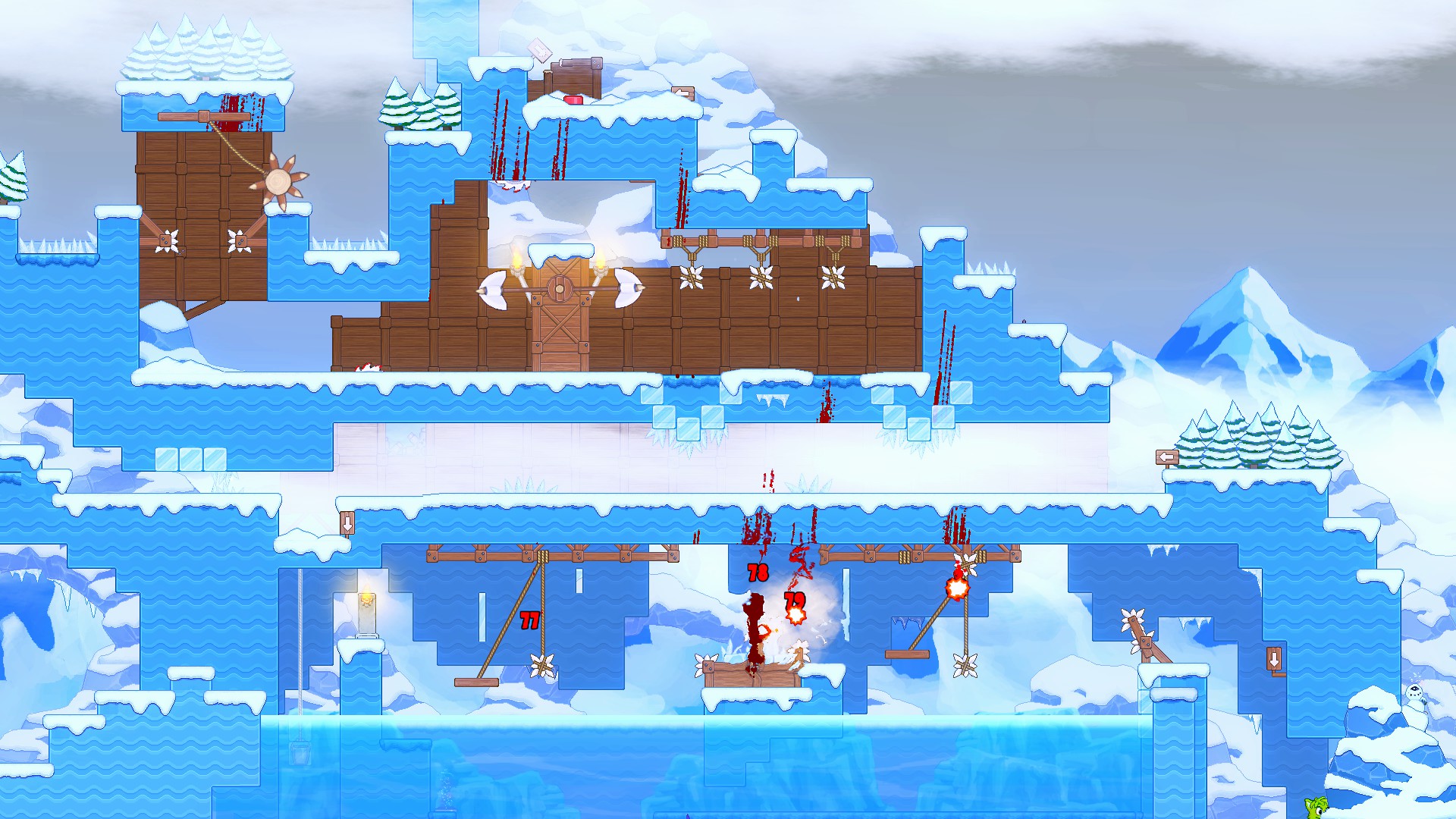 After you beat a level, each one of your deaths is counted exactly where it happened. Way to keep the player at your game!

I’ve reserved this little section to say something about the game’s soundtrack, but let it speak for itself that I don’t even remember the jungle theme that was playing at 1-4 where I’ve died exactly 135 times. Here’s a quick guessing game instead: what does “skogstrollet” mean? Now the time has come to use our secret piece of information as a hint, so a quick look into our Swedish dictionary (and what do you mean you don’t collect dictionaries for random languages you’ll never speak in your life?) gives us the answer “forest troll”. If you got this one right, then hit that like button down below. ;-) 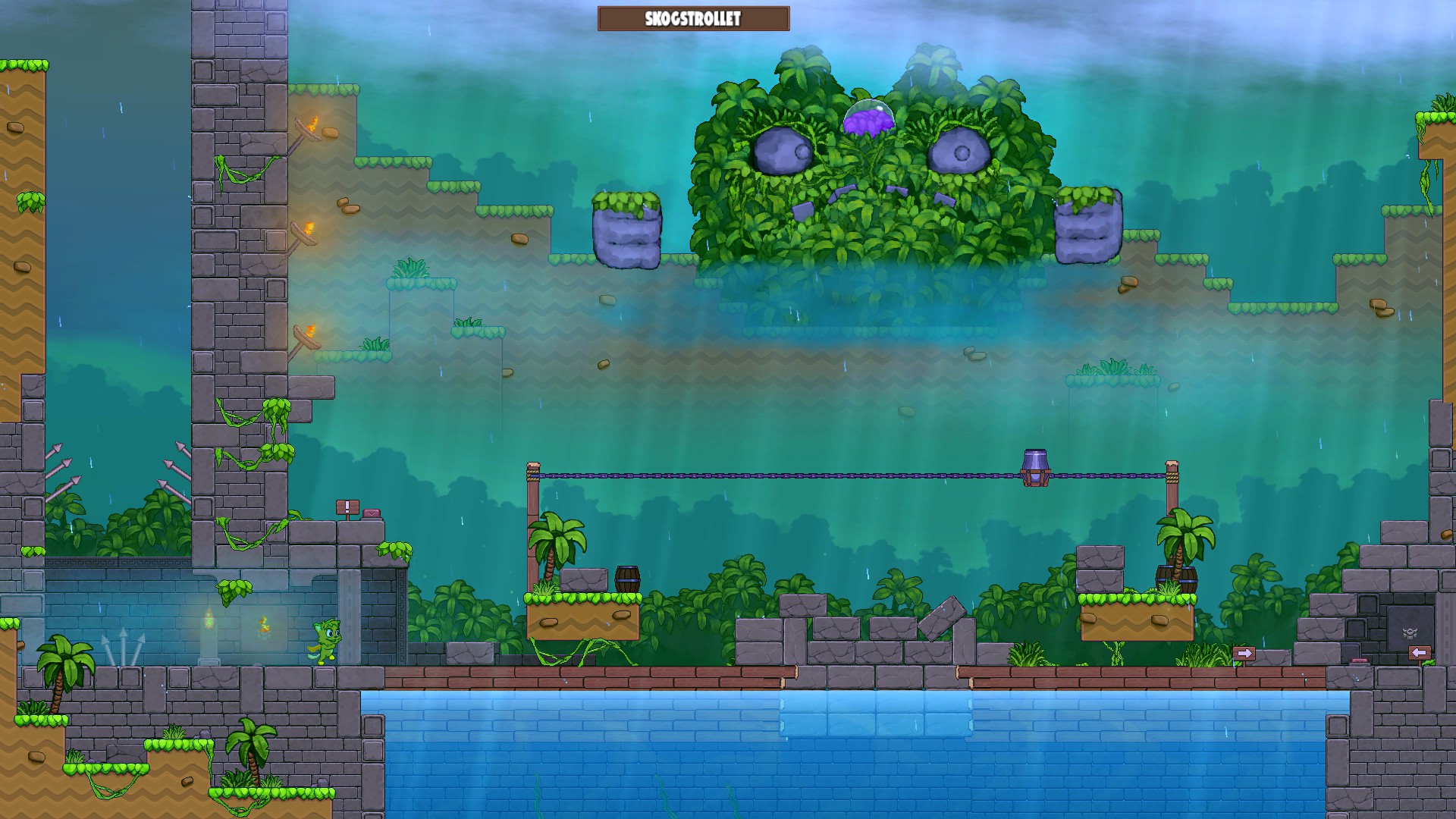 I am mentioning this, because this word has been used in the game as the name of one of the bosses and yes, the language had been set to English. Maybe I’m just nitpicking on something that was fully intentional on the side of developers, but I find it highly unlikely, since in some non-English versions of the game there are fragments that take a few milliseconds to change from English to localized text and things like level titles or player tags are outright left untranslated which brings me to a conclusion that whoever does game localizations for 2Play has a bad habit of leaving their jobs half-finished. Changing the game language is by itself a whole another riddle to solve. Most games on Steam provide a special tab just for language settings where you can explicitly select which locale should be used in gameplay and that makes sense if, for instance, you want to play a game that isn’t available in your native language, but for some reason you prefer to play it in French than in English. But if you want to change the language of Bloody Trapland 2, there is no such setting available - you have to change the language of your Steam client. Normally I’d let such little bungles slip, as they wouldn’t really be a dealbreaker in an otherwise cool game, but this is just too much - unintuitive game start menus that make you mash random buttons until something works; the initial screen, where the sky painter apparently got drunk and didn’t show up at work; finally, the difficulty level setting that won’t stay on normal between game launches, so you spend most of the time hitting your head against the desk, trying to not die on the “traplander” level without even knowing. On top of that, the game is just painful to play - and yes, I mean it literally. Just ask my fingers after hitting WASD for 3 hours in the same pattern or my eyes after seeing those annoying pastel-colored cats turn into red puddles again and again. This is more than just poor decisions in design and implementation - this is deliberate cruelty. To create a game like that should be a crime punished by lifelong toil on a galley. With chamomile flowers for oars.

Yeah, we don't do that at 2Play. No one uses it anyway... what do you mean you're "bilingual"?

+ Bloodstains resulting from a death of your character are oddly satisfying to watch.

Turns out this game can be played with up to three other people in co-op. However I’m not trying it with the two and a half friends I still got left cause I’m seeing in it a serious threat of losing them as well. The game feels like it was more fun to code it than to actually play it. I could probably have written a similar one with a team of the same size. Although, we would have implemented full PC controller support.