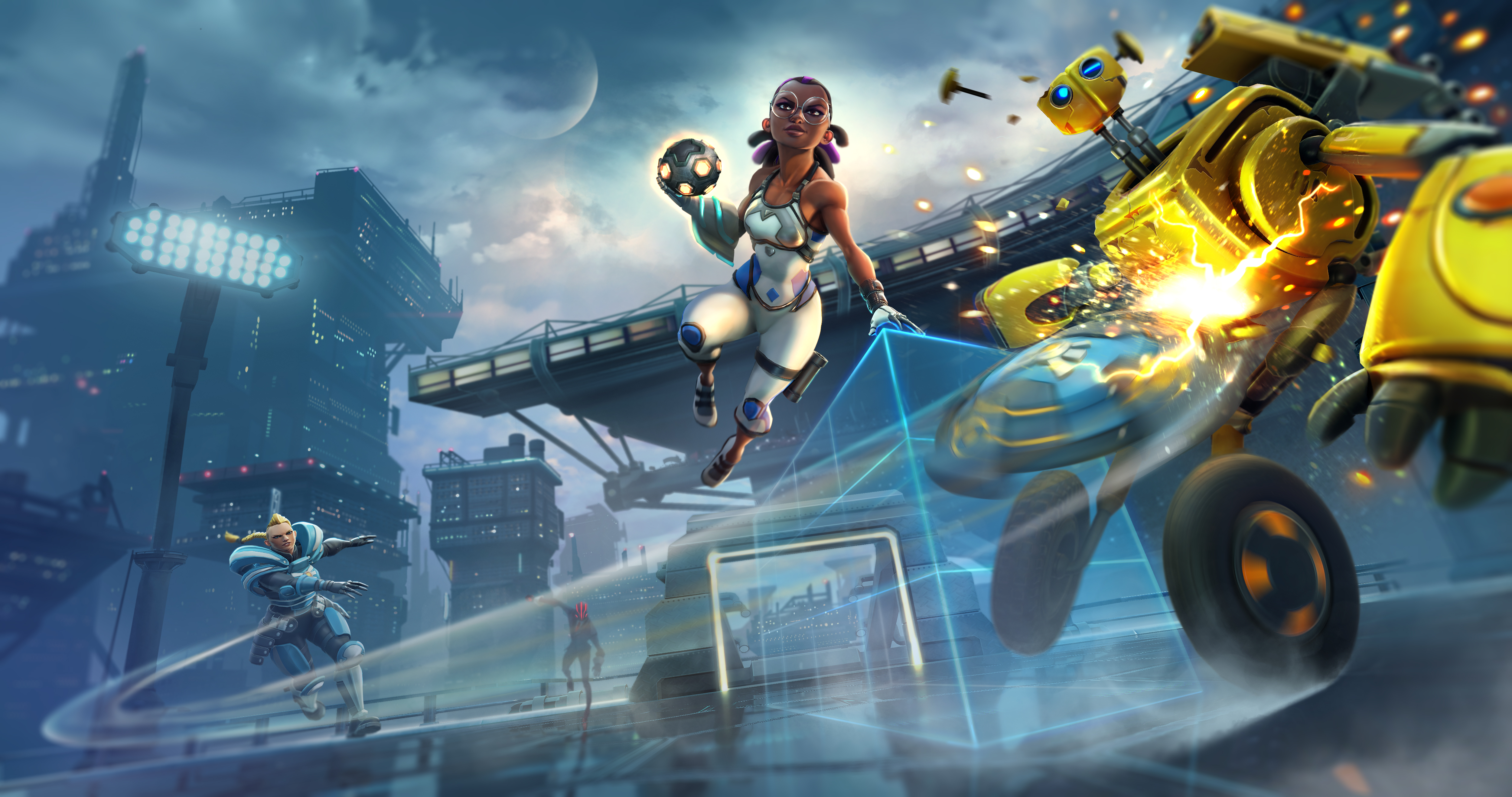 Speedball met Overwatch and they had a Cassie Cage of sports games.

Finally it's arrived. Unique visual style. Revolutionary gameplay. Vast content that's yours for the taking without paywalls and grinding ad nauseam. Steel Circus has it... not. But you sure as hell ought to give it a try. Developed by Iron Mountain Interactive and published by Oasis Games, the game entered Steam Early Access on August 8th and this review is a collection of my impressions from its 4th closed alpha test and the first three days of open beta.
If I was to put Steel Circus gameplay in a single word, it would be "addictive". Even though the number of available game modes equals exactly 1 (one in words), I've been suffering from one-more-match syndrome since day zero. What's the game's secret? I can't say for sure, but my bet is on combination of simplicity and spectacularity. The matches are played as a kind of 3 vs. 3 lacrosse without sticks and last for 5 minutes or until one of the teams scores 10 goals - far from a sensation, but if it ain't broken, don't fix it. Players can pass the ball to each other or attempt a shot on goal, but there is only a "throw" action implemented, so whatever you do, you'd better aim well. They can tackle the opponents if they don't have the ball or avoid being tackled by dodging, if they do, but both these actions are assigned to the same key, so one on one situations are easy to figure out, but still take a lot of timing and aplomb. There is a sprint button, but you can't use it while carrying the ball, so in order to create a fast-paced action you have to cooperate with your teammates or... the walls. All these details give Steel Circus the quality which has these days become game developers' go-to cheesy marketing slogan, but simply cannot be passed over in this case - easy to pick up, hard to master. 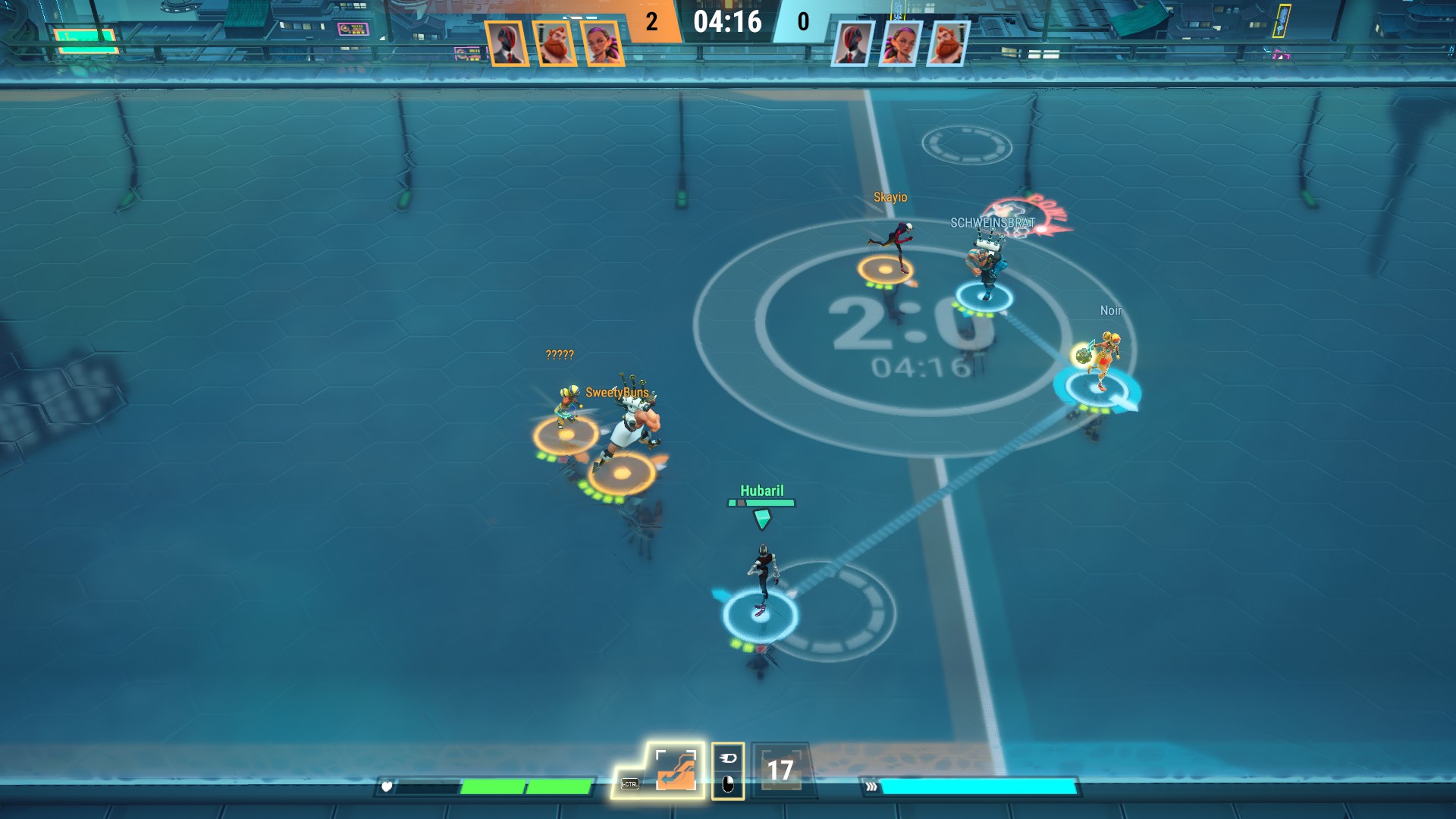 Welcome to the future. You don't make silly gestures to celebrate goal anymore. You just drop an emoji on the pitch.

If you remember Speedball, you might expect a certain degree of uniformity in the teams' appearance, but this is not the case with Steel Circus. Here, each player makes an individual choice of a champion he wants to play as. And I swear, each one of the champions available in the game right now could just as well be characters in Overwatch and no one would question the visual coherence of the entirety. This is something I could turn my nose up at, but this game is otherwise an eye candy. I'm absolutely bought by the little, but cool things done in the graphics layer. The look of the match ball, the fact that it gets on fire when thrown powerfully enough; the court that gets semi-liquid and opens in this manner for the players and the ball to come up. What's more, it serves as a screen to display funny stickers and info on match events. The pastel blue and orange illumination of the goals. Finally, the saturation of the general color scheme while retaining the futuristic ambience of the whole thing. All in all, I find the final product visually appealing if you stay to have fun with it long enough and looking like a clone of another game at the first glance remains its only grave sin. 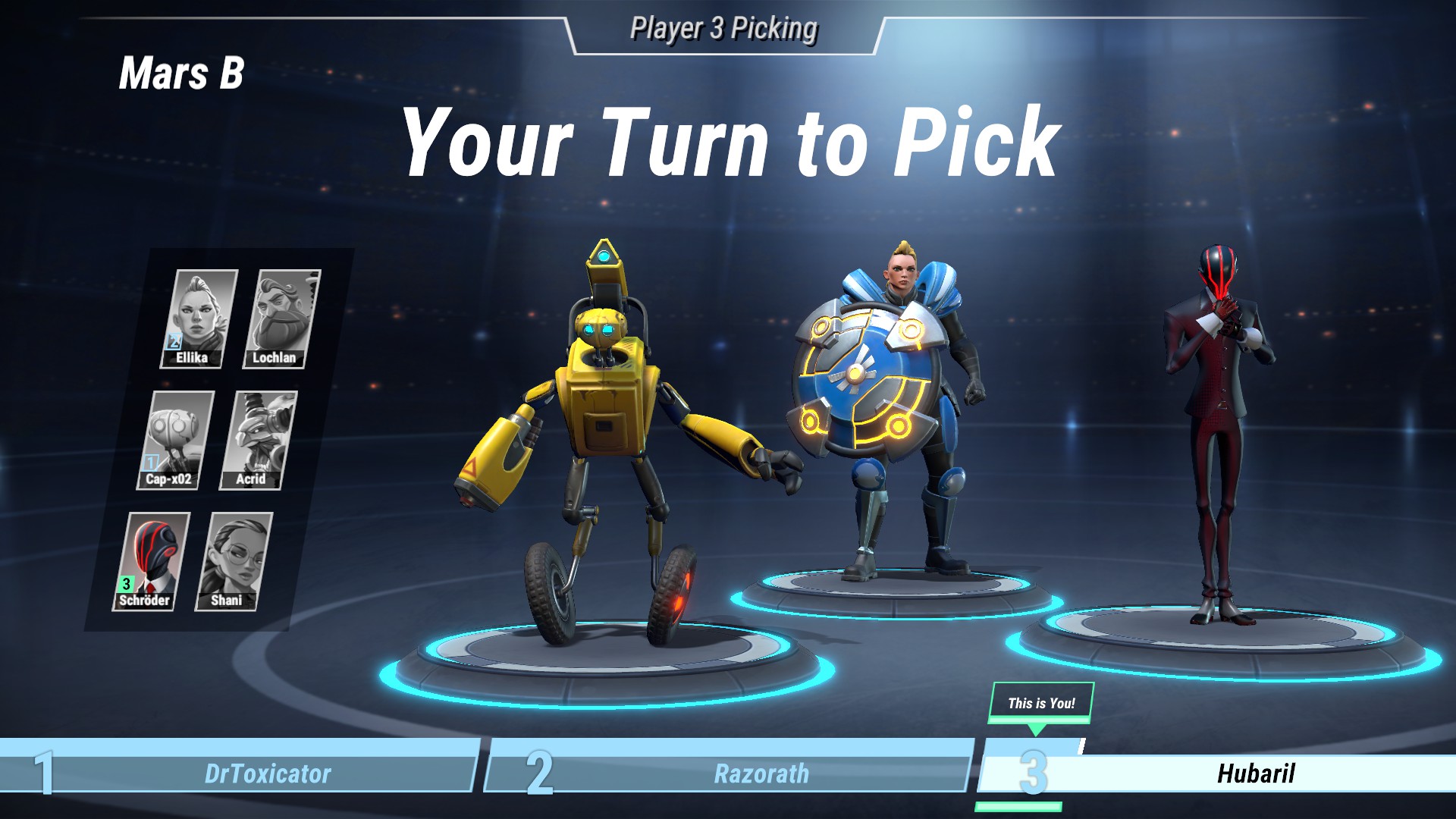 I main Schröder, I mean business!

Iron Mountain's creation is definitely more pleasant to look at than to listen to. The main theme has a premature climax followed by a collapse into a barely audible electronic ambient, which at the first moment made me think the game had glitched and the music stopped. The stadium announcers switch back and forth from speaking Mandarin to talking in a barely intelligible robotic voice, which makes me question why even have an announcer if all they do is annoy you and take your head out of the game. Good thing the sirens that play whenever someone scores a goal get me so pumped up that I forget about wanting to hit my head with that steel match ball. But still, I'd be happier if I could just choose my favorite announcer in the settings. Plus there should be more than just two of them to choose from. To be frank, the game is in desperate need of more content in general. If you get bored with quick matches, there is virtually nothing else left to do (unless you count training, where you play against an unimplemented AI, as a game mode). There is a serious deficit of arenas the matches are played on, since the second stadium ever has just been added at the beginning of the open beta. As for the champions, the game features currently 6 of them in total, which would be a fair number if all of them was available for every player off charge. Unfortunately, unlocking half of them takes either ages of grinding or forking out 20 bucks for the All Champions Pack that gives access to both current and all future champions. This might be quite a good deal - provided that the game survives long enough to see the introduction of any new characters. However, for a 3 vs. 3 game, the initial number of champions should be at least twice as many as what the Iron Mountain guys have provided us with, because every player has limited patience for same mirror match games all the way. Some customization of champions' appearance would help a lot in this madness and of course, you can buy skins, but their prices are for some godforsaken reason in the premium currency. And you know what's funny? That real money doesn't buy you anything more impactful than that. All that has an influence on your performance, i.e. locked champions, can be grinded for, but you want some alternate color pattern for your clothes? Five dollars. PayPal or debit? I really want to get behind the devs for keeping any kind of pay-to-win out of their game, but there's a little devil on my shoulder that keeps whispering in my ear that Steel Circus won't sustain itself this way for long. 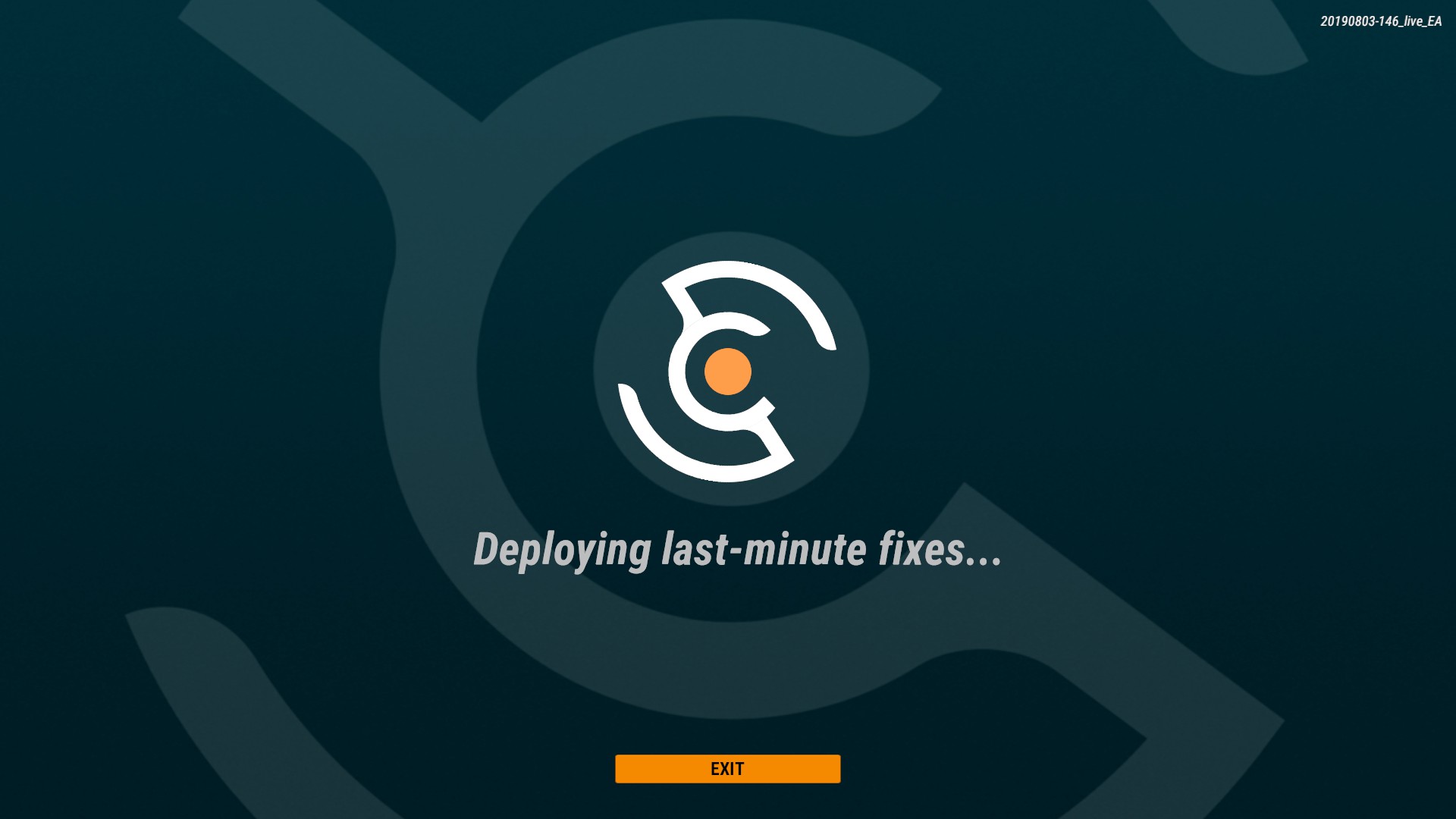 "Why would they put an Exit button on the loading screen?" - I asked myself, but I was just about to find out how long this game takes to even start up...

Apart from the lack of content, there is one more childhood disease currently plaguing Steel Circus, and that is bugs. Half-rendered court as a provisional main menu background, teammates miraculously selecting the same champion, matchmaker scratching the match after realizing it was initiated with one player missing from the lobby. And that's only what I managed to catch with my own eyes. Some players have also reported that matches too many players have rage-quitted from get aborted and not recorded in their account progress, but - well - it doesn't bug me that much. If I was snappish, I'd complain a little about controllers being much less precise in this game than keyboard and mouse while the latter makes untrained players throw the ball in the opposite direction to where they wanted, but I'm not snappish, so instead, I'll praise the devs for making all controls fully remappable both for keyboard and mouse and for any kind of controller, which should be a gamedev standard, 2Play Studios. Despite all the little and even medium-sized technical faults, I'm still digging Steel Circus for what this game is, however I'm fully aware that my hope for it to go through open beta as a product worth its price in microtransactions might turn out to be nothing else but wishful thinking. Therefore, I don't recommend anyone to invest their time or money in this game, but merely to give it a shot.
Pros:
+ Simple, but intense gameplay
+ All the graphical bells and whistles
+ Full freedom in assigning controls
+ Schröder's suit!

Cons:
- Nothing to do but playing basically the same match over and over again with different players in the roster
- Matchmaker that keeps acting up
- Hellishly annoying announcers
- I hate Overwatch, so -1 point for resemblance

I'm not fussy though - all I'm missing is fully functional text chat so I can trash-talk my teammates.