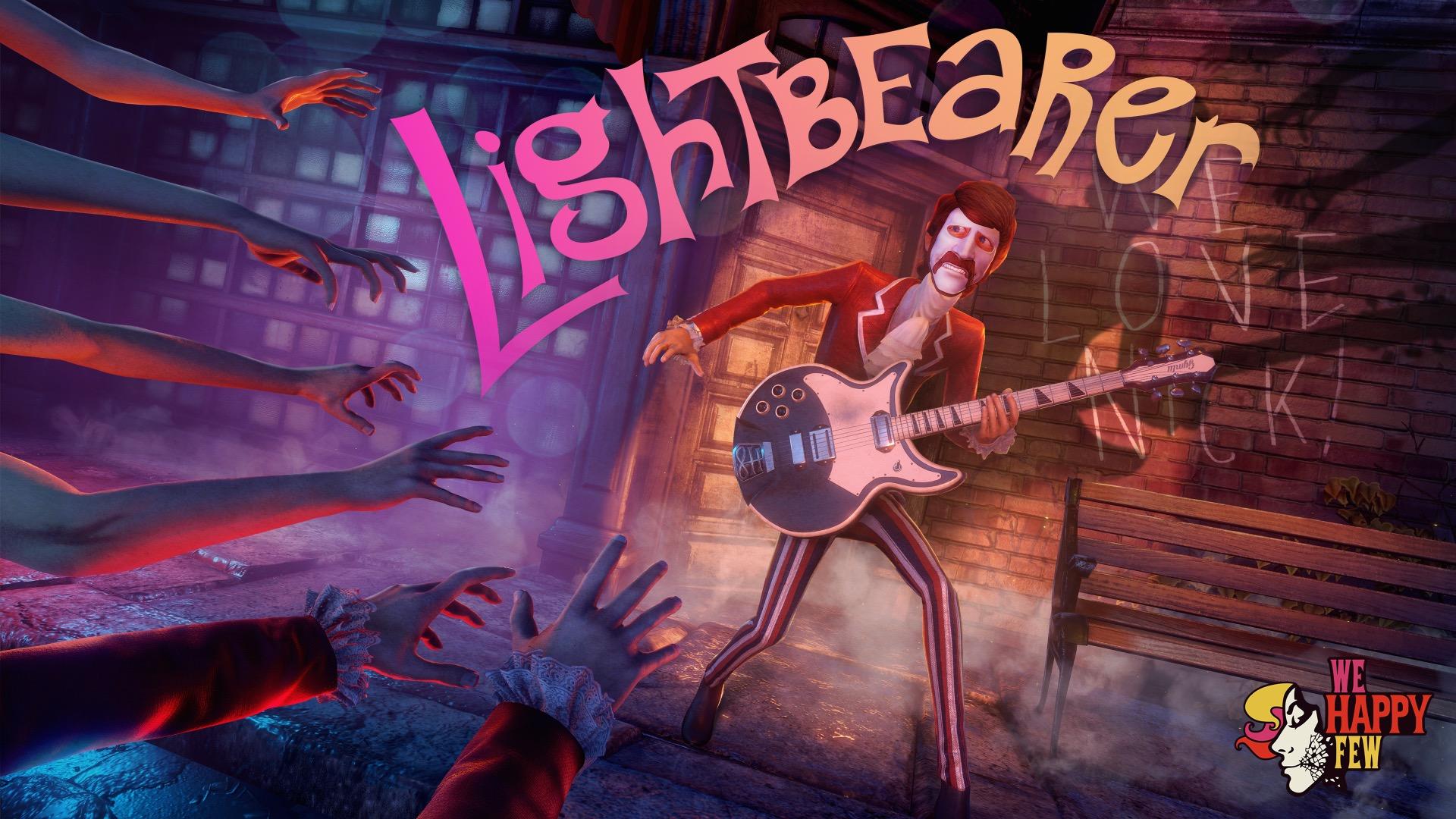 A short story playable separately to We Happy Few‘s main campaign, Lightbearer places players in the shoes of Nick Lightbearer, Wellington Wells’ favourite rock star. Awakening from yet another night filled with sex, drugs and rock and roll, Nick is mortified when he finds some ominous lyrics scrawled on a piece of paper. Plus, he’s also covered in blood. But he couldn’t have murdered anyone, surely? Not Nick Lightbearer.

With the bodies stacking up, Nick begins to question his innocence. After all, he can’t help but indulge himself in drugs and alcohol whenever the opportunity arises. And after taking things too far, he often doesn’t remember exactly what he got up to. But odd things like pieces of music jog his memory, revealing tidbits of information that give him more reason to worry about the murders taking place.

The bulk of We Happy Few‘s Lightbearer DLC takes place inside a hotel hosting a Nick Lightbearer fan convention, meaning Nick has to keep a low profile for the most part. After all, he doesn’t want to be bombarded by fans given his current predicament. There’s no real need for stealth though; your progress isn’t going to be halted if someone sees you. A linear adventure overall, the worst that will happen if you’re detected by fans or paparazzi that aren’t being held back by security is that you’ll have to engage them in combat. 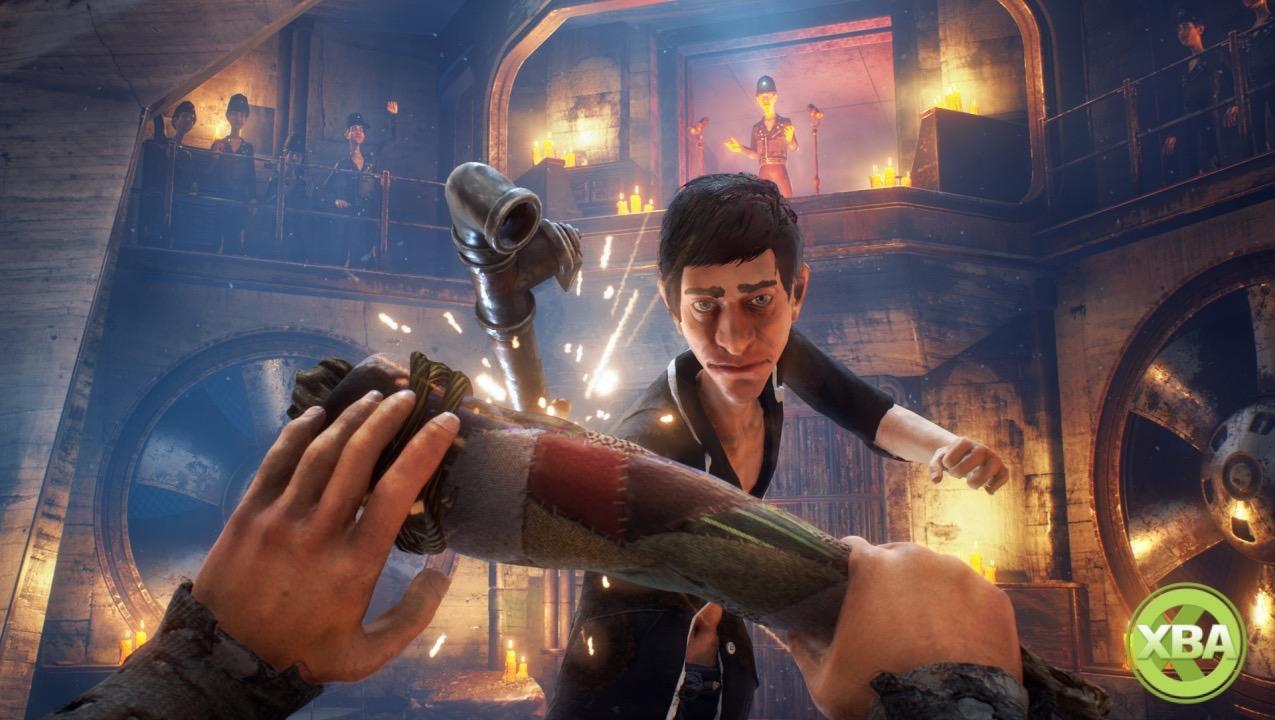 Being the rock star that he is, Nick Lightbearer isn’t really a brawler. Instead, he uses his guitar to protect himself from attackers. And no, he doesn’t hit them with it, he uses the power of music. By tapping the right trigger, Nick lets rip with some forceful licks that damage enemies caught in their blast. Tap the right trigger repeatedly, however, and your guitar power depletes, leaving you vulnerable. Holding the right trigger to perform a wide-ranging burst of sound that stuns enemies also depletes your guitar energy (similar to "Brutal Legend").

To defend yourself, a tap of the left trigger creates a sound that acts as a shield, preventing damage from being taken if performed just at the right time. And you’ll also be glad to hear that doing so replenishes your guitar power, allowing you to go on the offensive again. The left trigger can also be held, serenading an enemy in front of you and eventually making them fight for you for a short while.

Progress far enough in Lightbearer and you’ll even unlock the ability to throw golden LPs. While they can be tossed at enemies to cause damage, they mostly come in handy when attempting to solve the few puzzles that the DLC throws at you. You’ll generally be required to throw them at switches to clear up hazards blocking your path, but sometimes you’ll need to ricochet them off surfaces to complete the task.

Abandoning We Happy Few‘s survival mechanics, Lightbearer is a simple experience that provides little challenge. There’s little opportunity to get lost, combat is never overwhelming, and the puzzles are basic. The highlights of the DLC are undoubtedly a couple of drug-fuelled trips – one in which you have to do an ample amount of platforming after becoming miniaturised – and a thrilling final boss fight, made all the more engaging by your weaponised guitar skills. 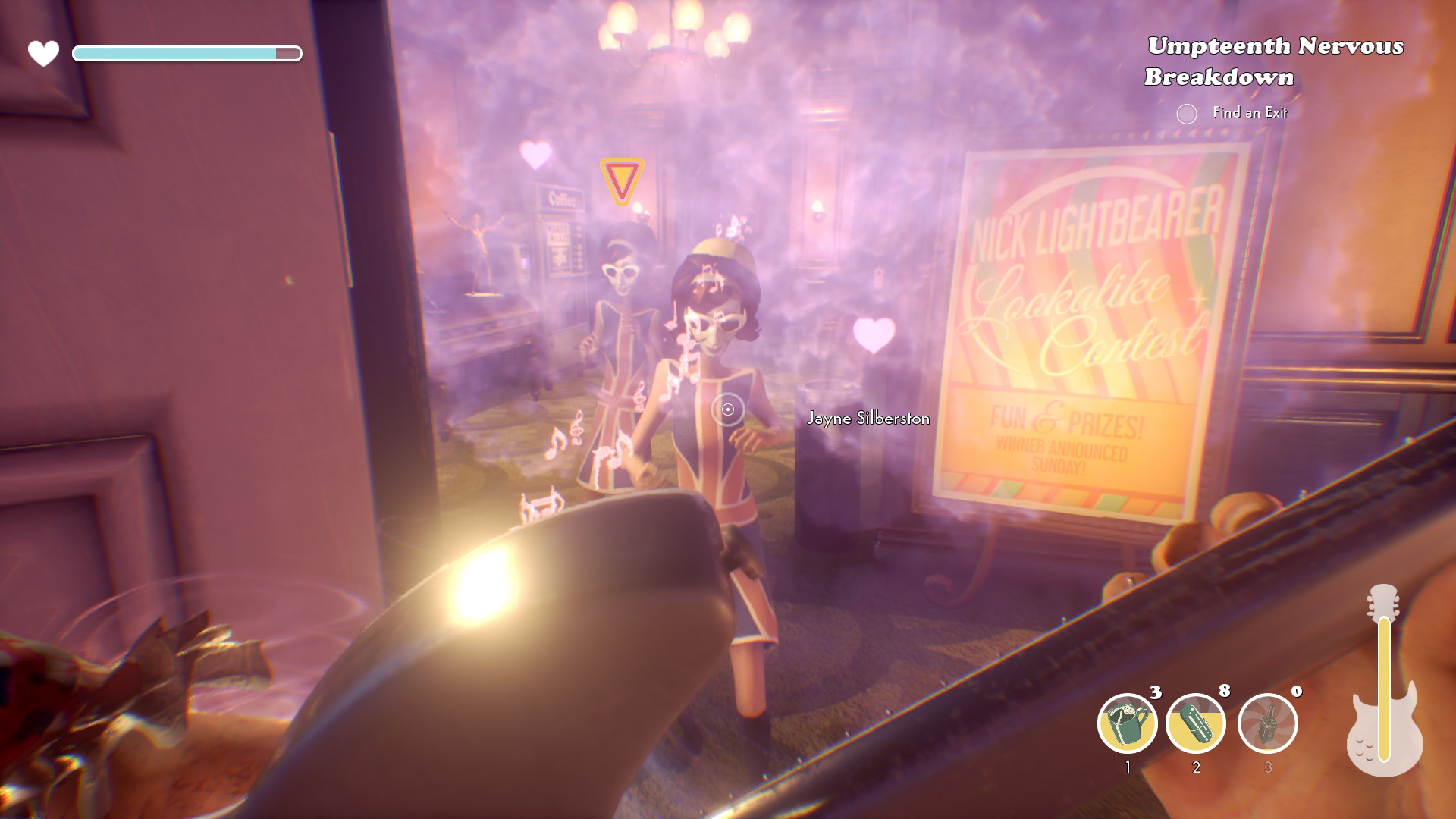 Like the rest of We Happy Few, Lightbearer is a bit rough around the edges. It also sometimes feels like there are too many loading screens. Once its story has got its hooks in you, however, you’ll want to keep playing until you find out if Nick Lightbearer is a cold-blooded killer or not. It’s just a shame that it’s all over in two to three hours, and there’s no reason to return afterwards. But it doesn’t cost a great deal, and it’s part of the game’s season pass if you’re after yet more We Happy Few escapades.

It's not an essential dlc for the game, but it's a welcome one. If you enjoyed We Happy Few, you will surely enjoy this DLC... but for 3 hours... max.