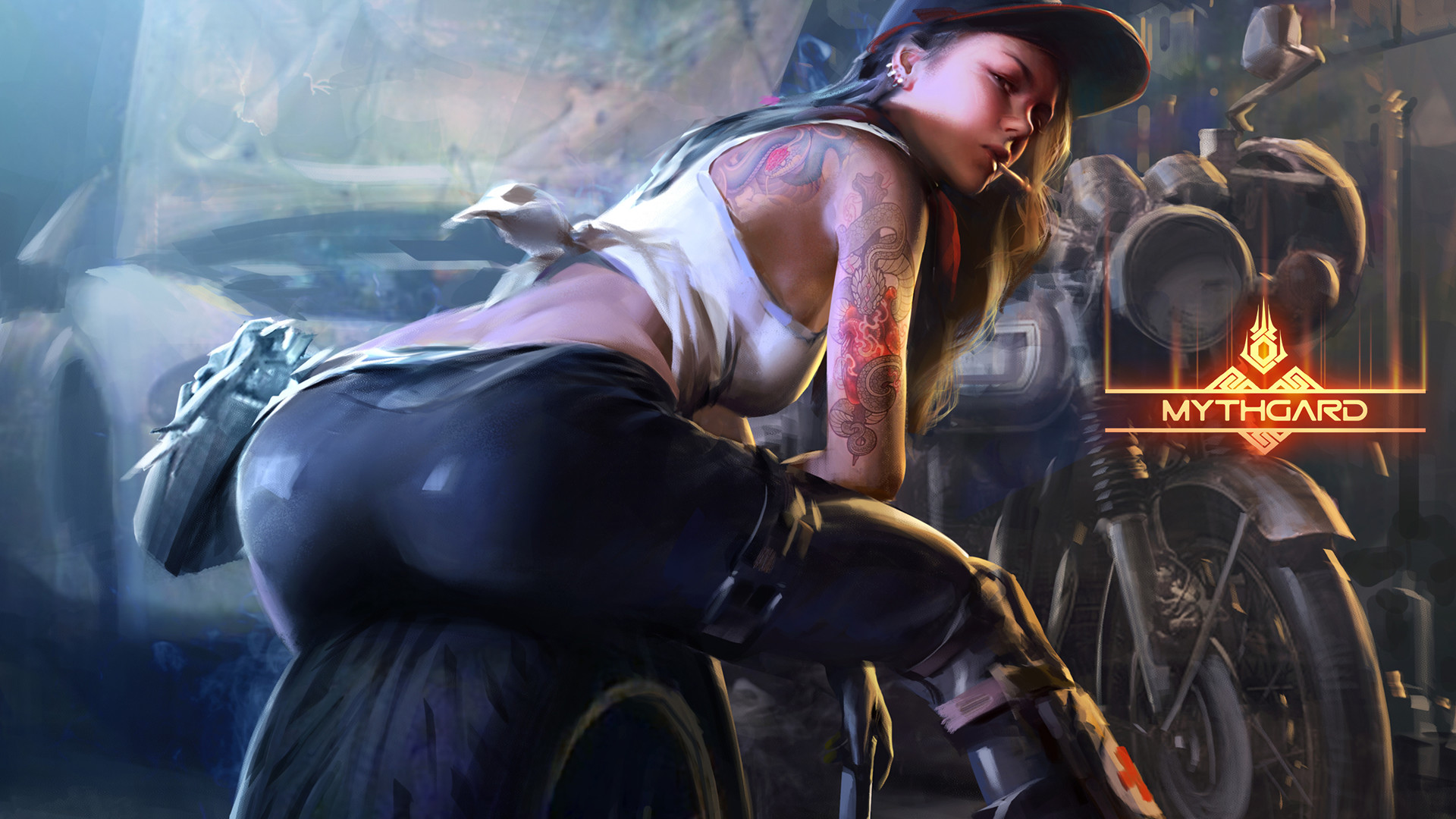 Bethesda wanted a Hearthstone of their own and to make it look original, they came up with a truly revolutionary idea of adding a second lane. After them came Valve and blew our minds by adding a third one. How many lanes do you think Mythgard has? 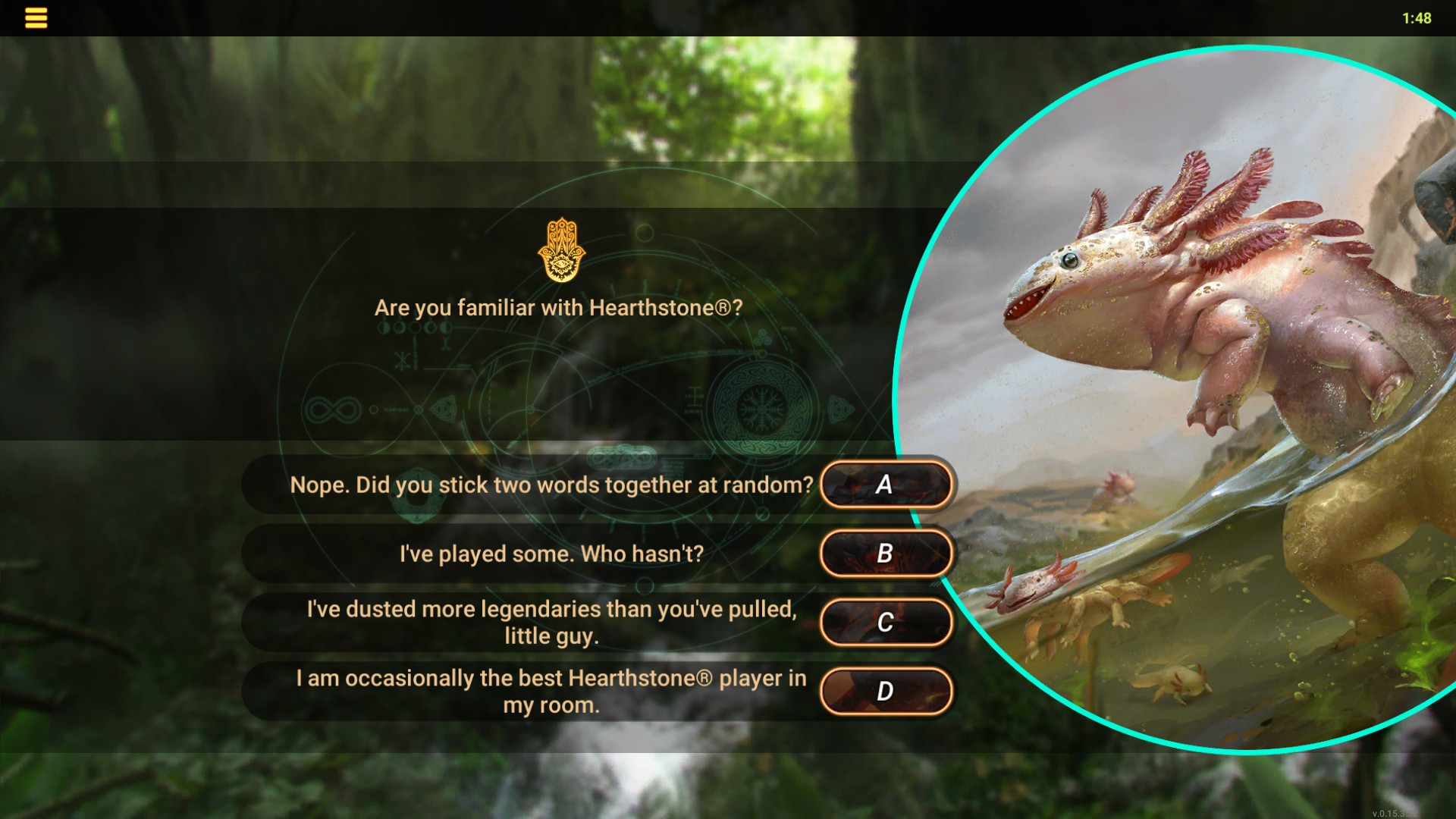 In case you don't like the fact that I keep referring to other games - even Mythgard itself does it, so I can.

The answer is 7. But the good news is Mythgard is actually far from being Artifact-level complicated as each lane fits only one creature per side of the battle, which can move each turn to any adjacent lane, but usually it means it cannot attack that turn. Any opposing creature must be removed before going face from the same and adjacent lanes - of course, there are certain exceptions to that. That would be it though, when it comes to differences from leading brands on the digital CCGs market. In its foundations, Mythgard is just another Health-Mana-Creatures where you build your deck, beat your opponents (human or AI), open booster packs and repeat the whole thing until you've become the ultimate champion on the game's e-sport scene -- or realized that all your decks which might have ever been somewhat competitive are now invalidated by an influx of insolently overtuned cards from new sets into the metagame, rendering futile all the time and/or money you have put into obtaining what you have. 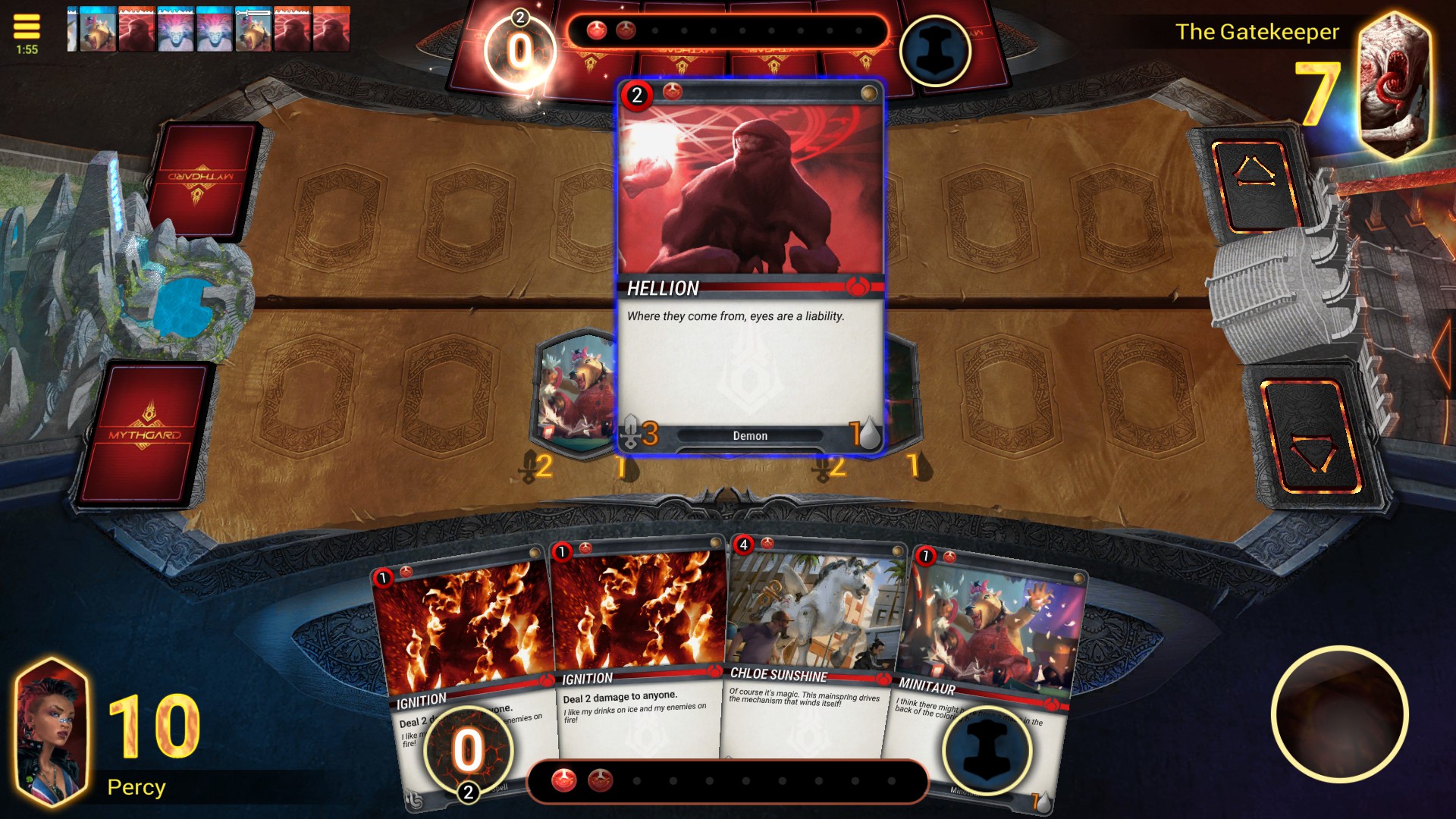 ...cause my brain cells are dead and all I see is red!
That's okay... I'm over it. Now, where was I? My point is had you been supposed to enjoy Mythgard in terms of sheer playability, you would have gotten into the swing of The Elder Scrolls: Legends or Hearthstone long ago and invested too much time and money into your card collection to now ditch all that for a new game no matter how tempting the competition makes it. And boy, Mythgard is trying hard. The creators take pride in the sci-fi world inhabited by mythological creatures, unlike all those boring elves, dwarves and wizards. The visuals make it feel dark and austere, but at the same time every character and every place looks like there's a story behind it that I'd love to hear. The card arts are - well... *suitable for mature audience* and let's leave it at that. On top of that there's the gameplay that surely *everyone* knows and loves since it's so approachable for new players and engaging for experienced ones and challenging enough for those who have too much time and casual enough for those who haven't and yadda yadda yadda. I'm sure guys from Rhino Games would love me to marvel at their ingenuity forever plus one day, but they're unlucky to have hit upon a sort of intermediate TESL player as well as former HEX: Shards of Fate player. Having gathered such experience, you start to ask the real questions, one of which is "what is the bang for your buck?" 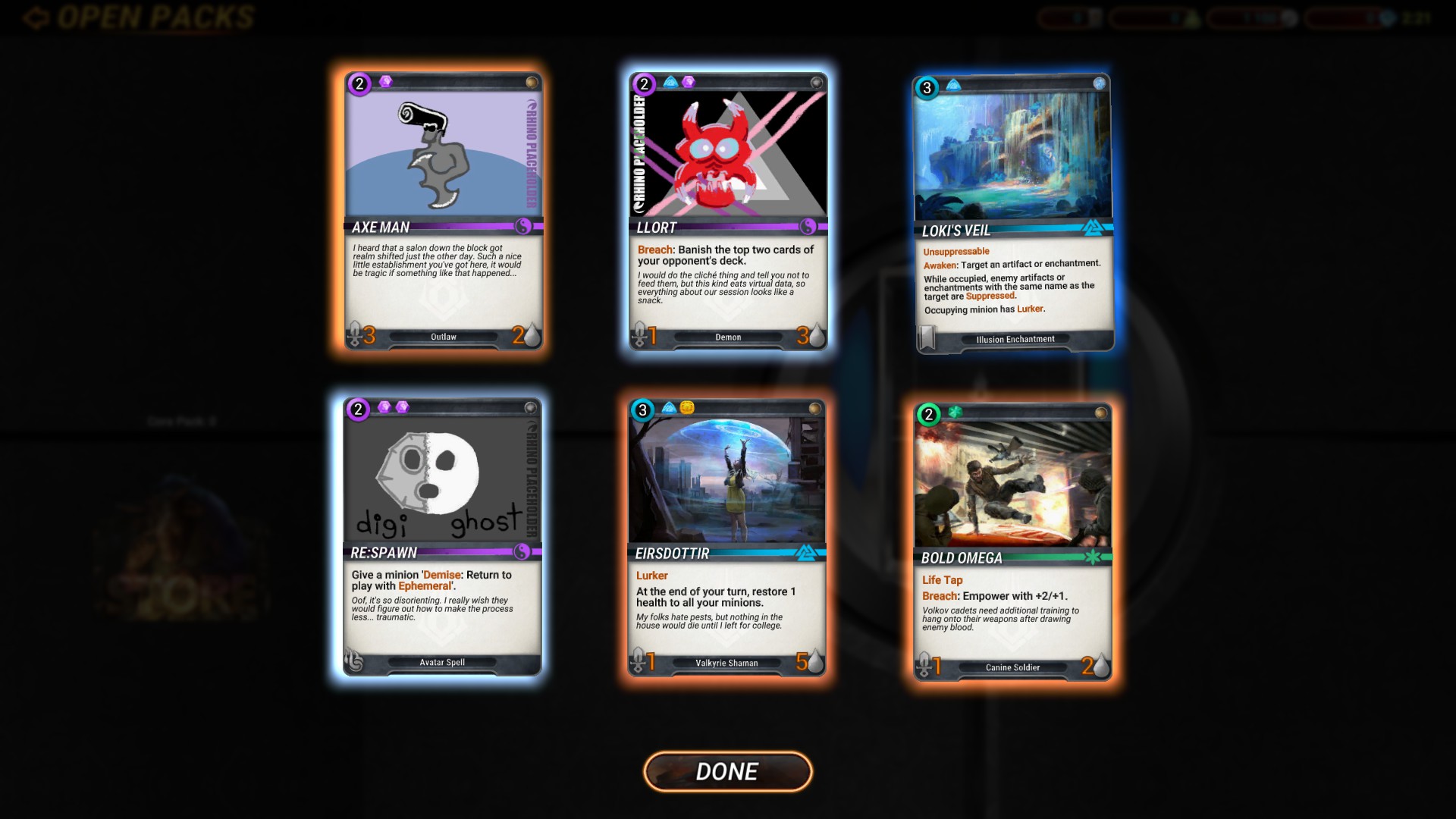 Opening of a booster pack. Guys from Rhino Games take the fact that Mythgard isn't yet finished very frivolously - which is visible on some card "arts". Also, pay attention, cause here's a little important detail...
No, I mean what really is the bang for your buck? Suppose you're an absolute beginner in a certain card game and you just spotted online... I mean came up all by yourself with a brilliant idea for a deck that will bring you right to the top of the ranked mode. In TESL, for instance, the minimal number of cards included in a deck is 50 (most of the times you're going to want to keep your deck close to that number because probability theory reasons). For a Mythgard deck, 40 cards is enough, which means that in the pessimistic case you'll need to acquire 4/5 as much cards as in TESL to build your desired deck. Score one for Mythgard. Certain restrictions in card inclusion apply for both games. In Mythgard, you can include in your deck up to 4 copies of a common card, 3 of uncommon, 2 of rare and 1 of mythic. Meanwhile in TESL, you can include up to 3 copies of each card, regardless of rarity. Some legendary TESL cards are unique, which means they can appear only once in a deck, but nevertheless, building a truly powerful TESL will usually require you to stack it with 3 copies of a card that's not only prevalent in the current meta, but also absurdly expensive, e.g. Daggerfall Mage. Therefore, score one for Mythgard once again.
Taking all the card copy restrictions into account, the full collection of TESL Core Set cards consists of 357 common cards, 303 uncommons, 318 epics and 104 legendaries; the numbers for the Core Set of Mythgard, on the other hand, are 464 commons, 348 uncommons, 176 rares and 98 mythics, so you'll spend arguably less time/money collecting those rares and mythics which gives Mythgard an edge over TESL since commons and uncommons are in reality dirt-cheap. Okay, but where to get those cards from? Booster packs of course. The option highlighted as "most popular" in Mythgard is $19,99 for 2550 units of mythril, which buys you exactly 17 booster packs. For the same amount of money in TESL you get a bundle of 15 booster packs plus one random legendary card. Each pack contains 6 cards in both games, but here goes the cold water on Bethesda's face: the rarity rates are fixed at guaranteed 3 commons, 2 uncommons and 1 rare per pack with 1 in 10 chance for a mythic. This is the TESL equivalent of always pulling an epic or legendary card, but you will never know how laughable this supposition is if you haven't dusted enough packs of 5 common and 1 uncommon duplicates into oblivion (pun intended). 69 sextillion points to Mythgard. No, I'm not exaggerating. 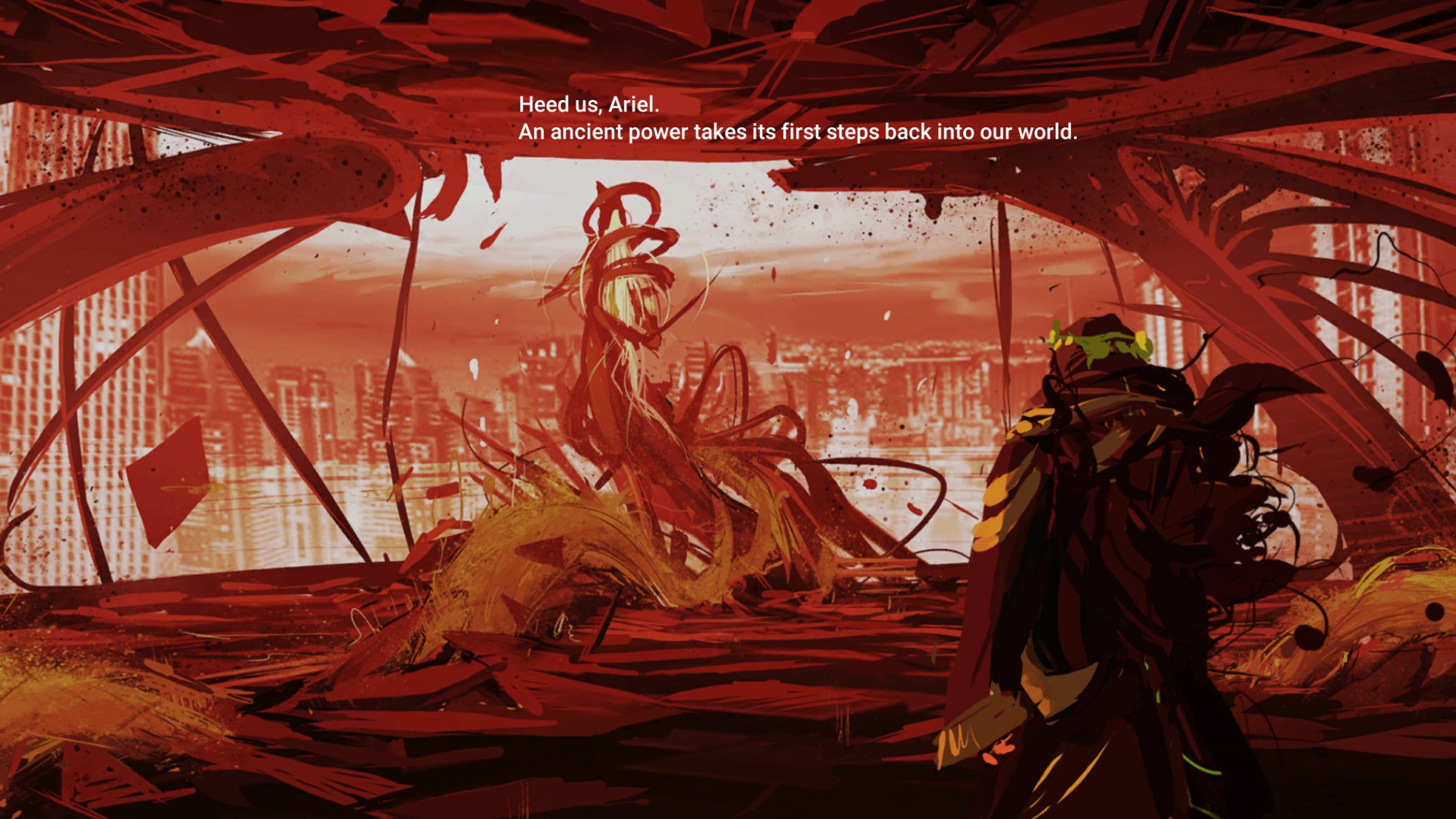 Paint-splashing apocalypse. Almost perfect for me. All that's missing is proper speech bubbles instead of those text fields slapped on in MS Paint.
So there we have it -- halfway through this what was expected to be an exciting match between two very similar games, my favorite until now CCG obliterated by an underdog. Can TESL redeem itself at least as a more budget-friendly option? Well, obviously not, since regardless the money to grinding ratio you put into the game, packs will always be your main, if not only, mean of card acquisition and these rarity rates that work blatantly against the player can't be balanced just like that by throwing more packs at him. If anything, Mythgard and TESL are pretty much even in that terms, although both games win and lose on unique details, whose influence on overall generosity is hard to calculate precisely without spending a few months doing nothing but grinding. And this is something I'm all but ready to do, even for a gem of a card game like Mythgard.
Don't get me wrong, this game objectively stomps the biggest players on the CCGs market, but with the overall digital card game boom inexorably fading out and the veteran players in the genre having settled down irreversibly with their favorite franchises, this might be too little, too late to take the biggest piece of that cake for itself. Furthermore, even a perfect collectible card game, if you can picture such, can be spoiled beyond redemption, if the publisher gets too greedy with releasing new sets - all the worse if the metagame bends in favor of those sets (I'm looking at you, Moons of Elsweyr!). The moment I'm writing these words, Mythgard is in a transitional period between closed and open beta. All the content available so far is the Core Set and one chapter of story mode, so it's hard to say what becomes of this game when it's as old as the big franchises. Having said that, Mythgard scores high with me as a game and the rating will be according, but given the specificity of the genre I must advise anyone reading this not to get lavish, but rather wait and see how the content evolves. For a nice ending, a little truism: if you were to complete your collection on full f2p, the game would actually be pay-to-play.
Pros:
+ It's a full on digital CCG. Take it or leave it
+ Dark and edgy ambiance in the story mode
+ Booster pack odds stomp most games in the genre if not every one of them

"HS is better than TESL, why didn't you use that for comparison?" You're just as screwed on booster packs as we TESLers are, so don't even start debating.