This game is on the weirder side

The Crow's Eye (abbreviated to TCE) is developed by 3D2 Entertainment, which I have found one previous game made under their name, and a new one coming soon named Arima. Oh yeah, and before I forget, this is the aforementioned previous one:

You play as an estranged child (I have only the slightest idea what you play as in all honesty, I had trouble paying attention during certain segments) confined in a abandoned building, under duress by a morally bankrupt scientist. I didn't find the story to interesting, but mostly because what is to be found is in audio logs, and I tend to have trouble focusing on them in particular while I am doing other tasks. You won't feel moved at the end if the logs don't do it for you, I know I wasn't.
Gameplay:

(Disclaimer: I haven't played many puzzle games, and I'm not good at them either) 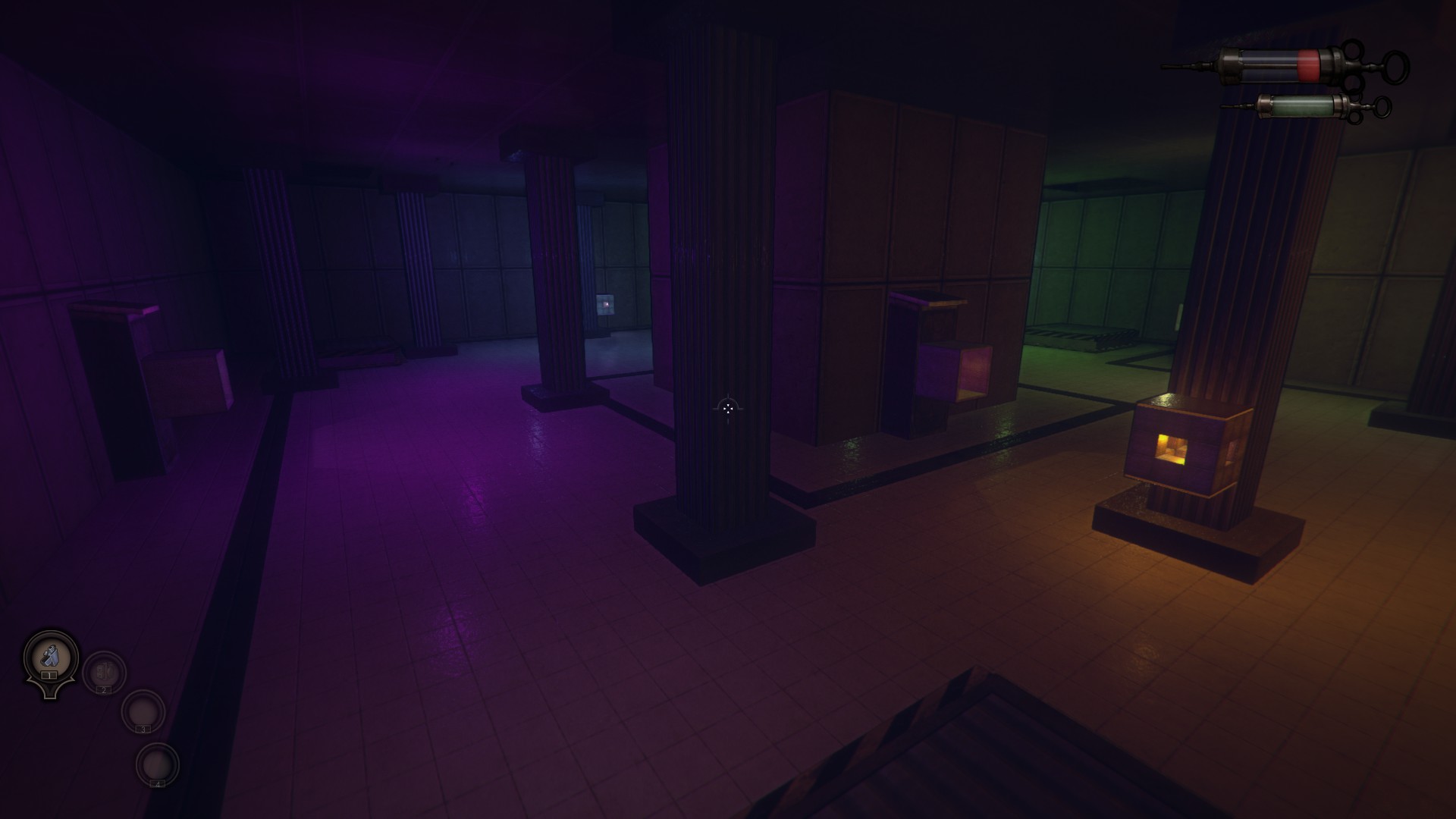 The puzzles themselves aren't that complex, mostly consisting of sliding blocks and boxes, along with some gravity based portions. A reoccurring one (shown in the screenshot above), color coded boxes have to be inserted into their corresponding slots, but the boxes keep moving in a direction until they collide with something. These are usually solved in a specific way, and since I suck at puzzles, these took longer for me to solve than they should have. They also have puzzles where the player is tasked with sliding boxes in certain directions to make a pathway, which is pretty common in games. There is a more interesting one that I personally have not seen in a game before. Essentially there are rooms where there is a strong magnet in the wall, and boxes have to be placed in specific spots so that when the magnet is activated the boxes fill in parts of a platform, this occurs two or three times throughout the game, it's not hard, just thought it was neat. The only really complicated puzzle is during the transition from midgame to late game, where blocks have to be rolled onto a plate, with the insignia matching the pattern under it. There isn't much to right home about in this category, but it does have the experimental feel to it, like they didn't know what they wanted to go with the game so they said,"Fuck it!" and threw puzzles at a wall and saw what hit. Because it has all of the more basic puzzles, including the trial and error press and flip shit until you find the right order that opens the way forward. It's not bad at all, it just has that jank feel to it. 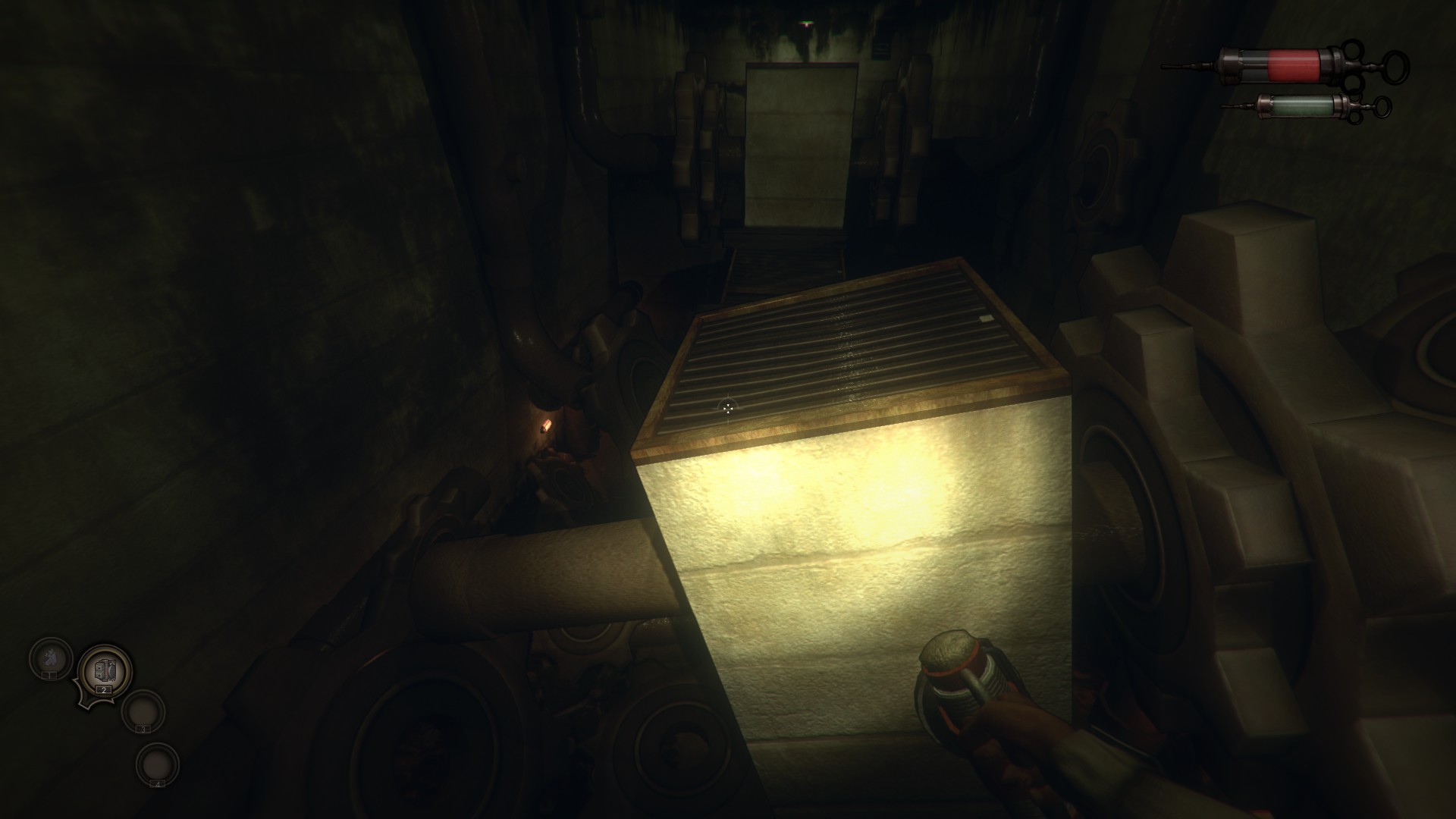 There are a multitude of platforming segments along side of puzzles. The player acquires two tools for platforming, one of which is a hypodermic needle of adrenaline. You heard me right, each time the player character needs to reach that next platform that's out of reach, he shoots himself up with epinephrine to slow down his perception of time, and zooms faster and harder to an adjacent platform he previously could not fathom reaching (meaning he would be long dead before the end). That, and he gets a high power magnet, that honestly isn't powerful enough to pick up a metal box, but powerful enough when encountering a magnet platform with the same polarity to launch a grown ass man into the air, but I digress. Most of the problems in need of solving during the platforming segments usually entail just traversing from Point A to Point B via either the magnet, or maneuvering though moving platforms, or getting to a specific set of levers and activating them to progress. Again, not anything new, but it's servicible and can be entertaining depending on the buyers preference.