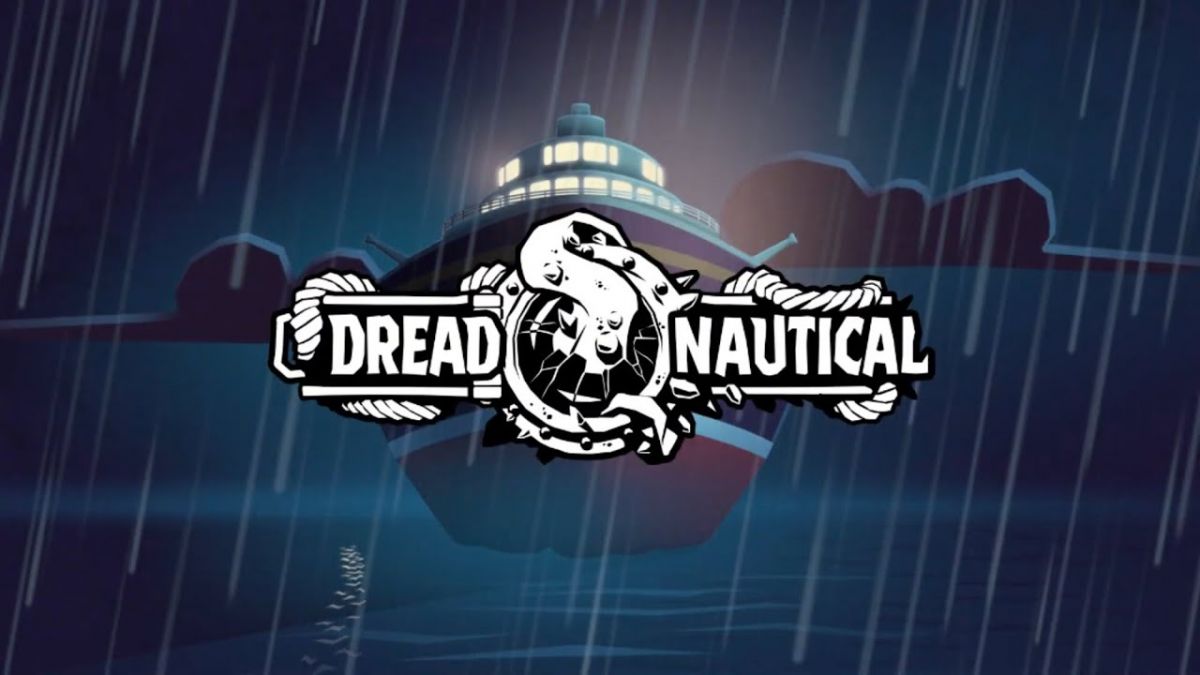 It's Lovecraftian. No, apparently it doesn't mean Minecraft porn.
Dread Nautical by Zen Studios on many aspects reminds me of Dark Quest 2 (it's already been almost three years now since I reviewed that one!). It's tactical, it's turn-based, you get one character in the beginning and gather a bigger team later on. Finally, both games strive for scariness in their own unique ways whilst they also try to be in unique ways cartoony and end up doing both these things poorly.
Dread Nautical is too ugly to be a children's game and not detailed enough to be a proper horror. Now I understand you are a small studio so you have to cut budget on graphics and come up with something that will at least make your game look different than others. However, making all your character models angular and taking away their lip movement is something that would work in a game which could compensate for it with vivid colors and/or lovable characters. I don't quite believe your rolling ball of purple spikes and I'm most certainly not scared with it. What frightens me the most is the ghastly noise coming from my setup's fan. On the lowest graphics settings. In the main menu. 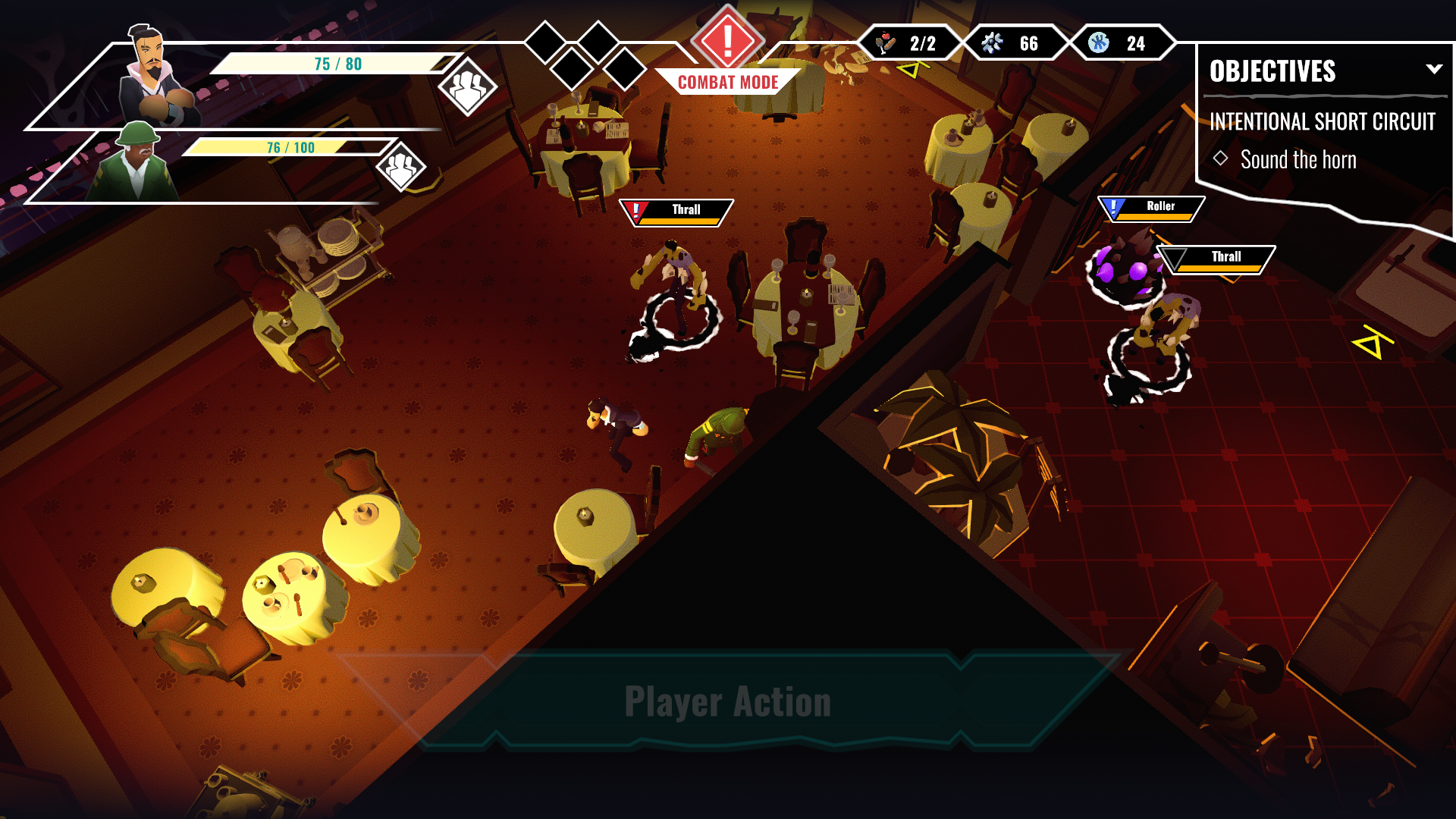 Some of you might not believe me about that rolling ball of purple spikes...
Which looks more like something out of a sci-fi game than a horror one if you ask me. Having your UI be simplistic white text on a black background highlighted here and there with that cyberneticky shade of turquoise sounds like a legitimate albeit misplaced idea. Whether or not it looks good on this game, to have put characters' portraits, their perks and inventory items icons in 45-degree-turned squares, is completely up to personal taste. One thing you cannot deny about Dread Nautical is that some UI design effort was put into it, which makes it kinda sad, because the final effect is not all that amazing and I would be much happier if the guys from Zen Studios had shifted their focus from UI to UX. How's my (User's) eXperience been while playing Dread Nautical? Well, I managed to drop all my terrain traps around myself while I meant to only go further one or two tiles. Then, of course, I avoided my own traps and went on to explore the level, but then, of course, I stepped right into them while backtracking, because the trap warning UI feature can be easily mistaken for a trap being only collectible in that place. I brought up the pause menu a couple times thinking the Esc key would only back out of the current screen. I spent all the skill points I had at the time in all the wrong places thinking I would be able to back out of the skills screen and just not save the changes. While trying to carefully distribute my very limited food supplies among the crew, I clicked what looked like a give food button thinking I would then be able to click the crew member I want to feed, but no -- it immediately feeds the currently highlighted character. What? The character you just fed is too scared to be taken to explore another level and needs to rest? Well, sucks to be ya, buddy -- no backsies! 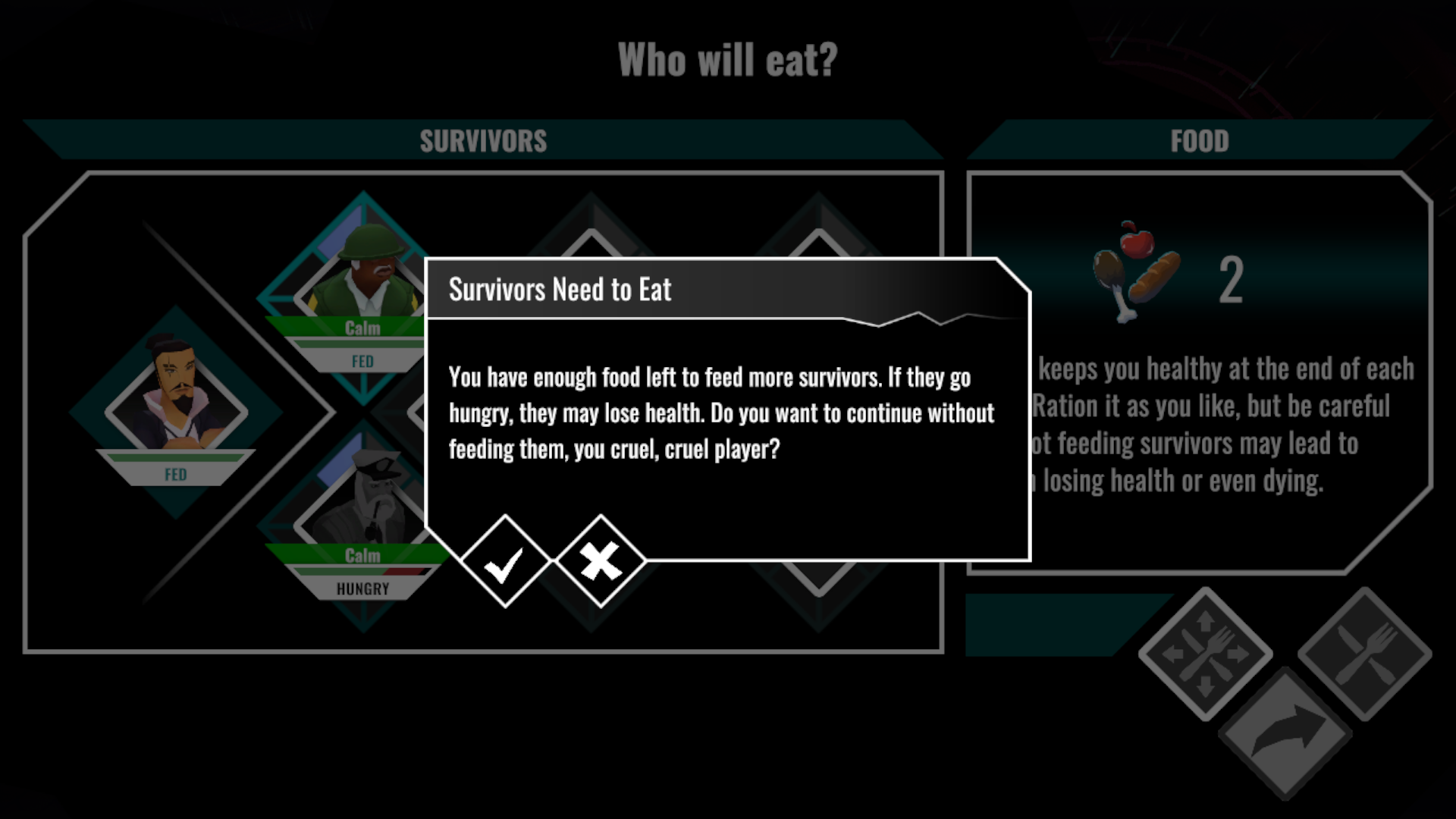 Also, if you try to be cheap on your supplies, the game will hit you right in your conscience. As I said, very limited!
No Backsies should be a mandatory subtitle for games on permanent ironman mode. I mean, what's up with that? Even games that do have an ironman mode (Mount & Blade, Europa Universalis IV) kindly offer you to maybe activate it if you want a greater challenge. In Dread Nautical: No Backsies Save and Exit are like those channel bundles at cable TV providers. You only want one of them, but you either pay for the whole package or you get nothing. Well, good thing I can still count on my two old buddies, Mr Alt and Mr F4, in that matter.
I have to give Zen Studios that they didn't mess up the user experience completely. Key bindings for turning the isometric location view around and zooming it in and out are there as well as the ones for selecting your inventory items. They do start with the 2 key, which makes quite as much sense as making a cake and throwing the first egg away, but let's not kick a man when he's down. We're still far from Dark Quest 2 level of inconvenience where all you would want to do, you did by dragging and dropping. So congratulations, Dread Nautical: No Backsies. For being only moderately frustrating to play. 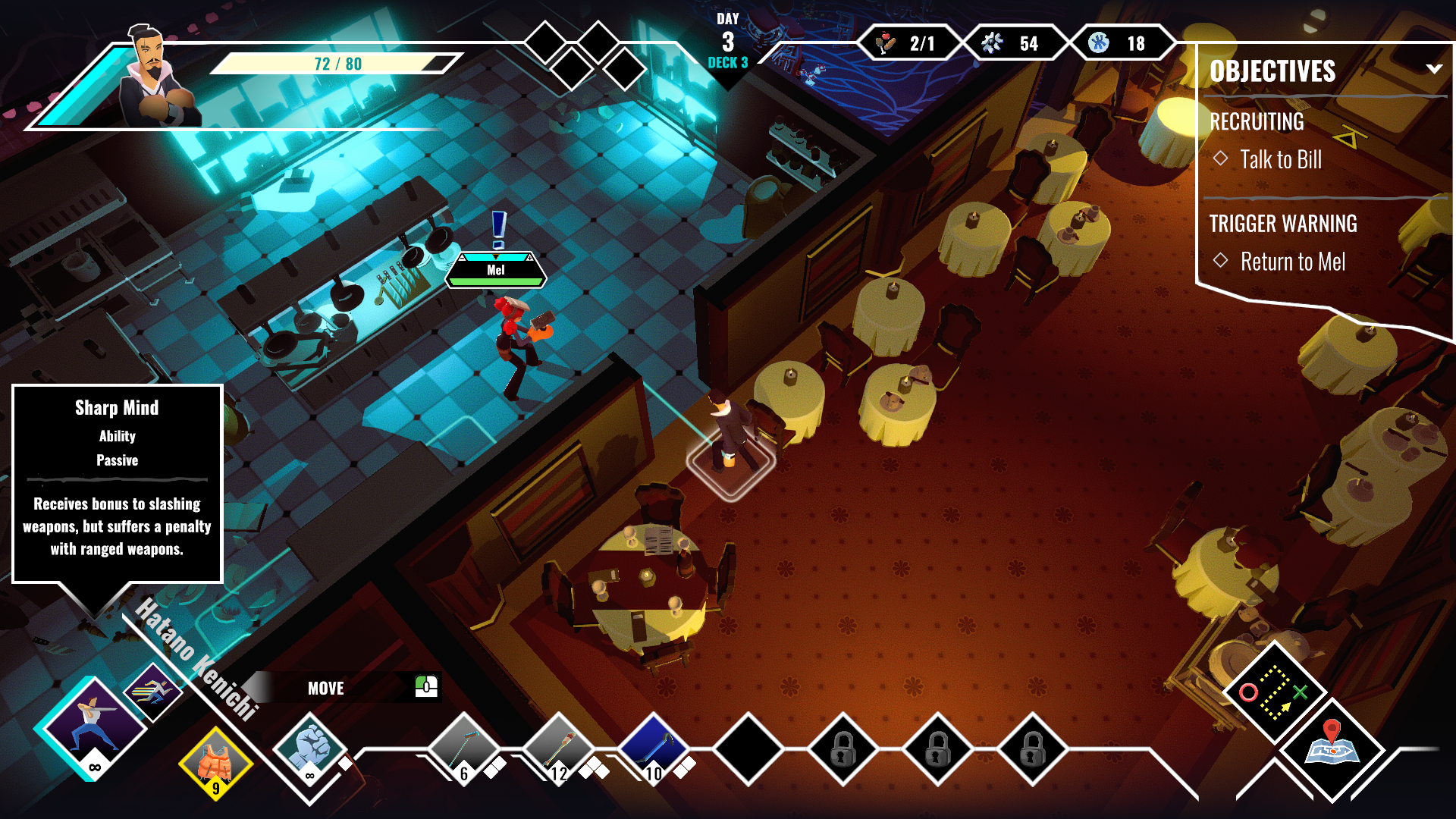 Characters' special abilities have no key binding. Oh, and some of them require two clicks to select!

Making dumb mistakes so easily in Dread Nautical: No Backsies teaches you quickly to always stop for a minute and consider your next move in silence. And while you do, you might notice that this game actually has a soundtrack, which, believe it or not, is unironically good. Ambient sounds that play as you explore the decks of the dreaded ship kinda remind me of those relax/study playlists on YouTube and Spotify cause they do help me think sharper and make more collected decisions in the game. They are also one of the few true hints that the we're supposed to be at least slightly flustered about what's happening on the screen. The voice acting is believable for most characters. The survivors scattered around the ship seems for the most part like an amicable (but not loveable) bunch and I really want to care to get them to like me and eventually join me. It doesn't mean that I do care, but I want to. 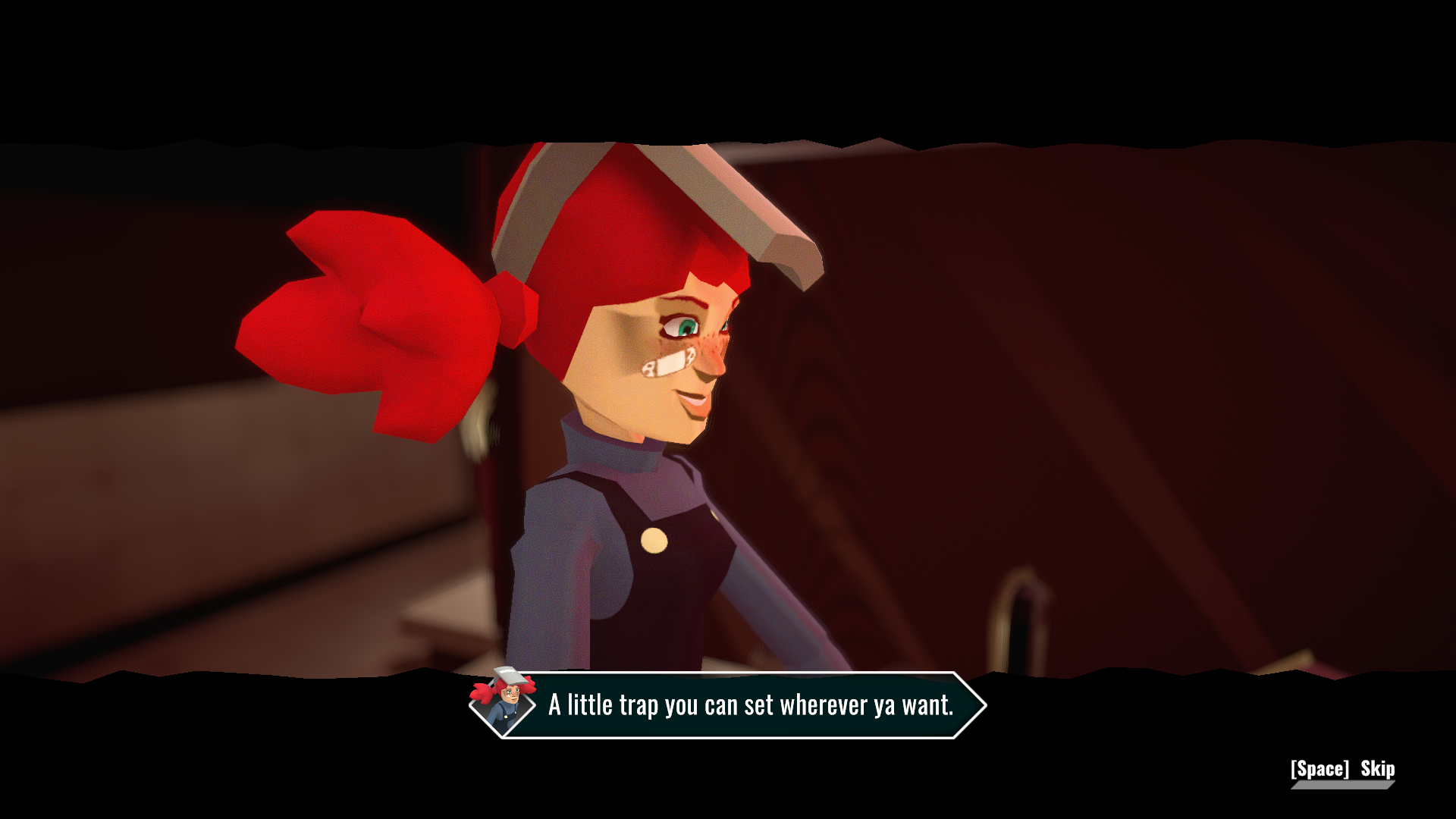 Mel seems like a person I would love to have on my crew. If it wasn't for the fact that in order to survive, I need a team of fighters.
Let's get one thing clear -- this game is bloody hard. Right after you find out that monsters from another dimension are easier fought when you have more humans on your side, you quickly learn the hard way that food doesn't fall from the sky, so you decide to keep your squad small, but well trained. But then it turns out that your squadmates get scared as you overwork them and need to rest to let it down, so you switch back to hiring mode, but before you can assemble a reasonable team of demon killers, you're thrown at the final boss, which takes all of your resources and manpower to get down to 25% health and still hands your bottom to you quite reliably. You realize you just don't have enough weapons, inventory slots and people in your crew. You have to do a lot of previous levels revisiting to gather what you need. You basically have to beat the game twice. All that on the normal difficulty level. The lowest available. 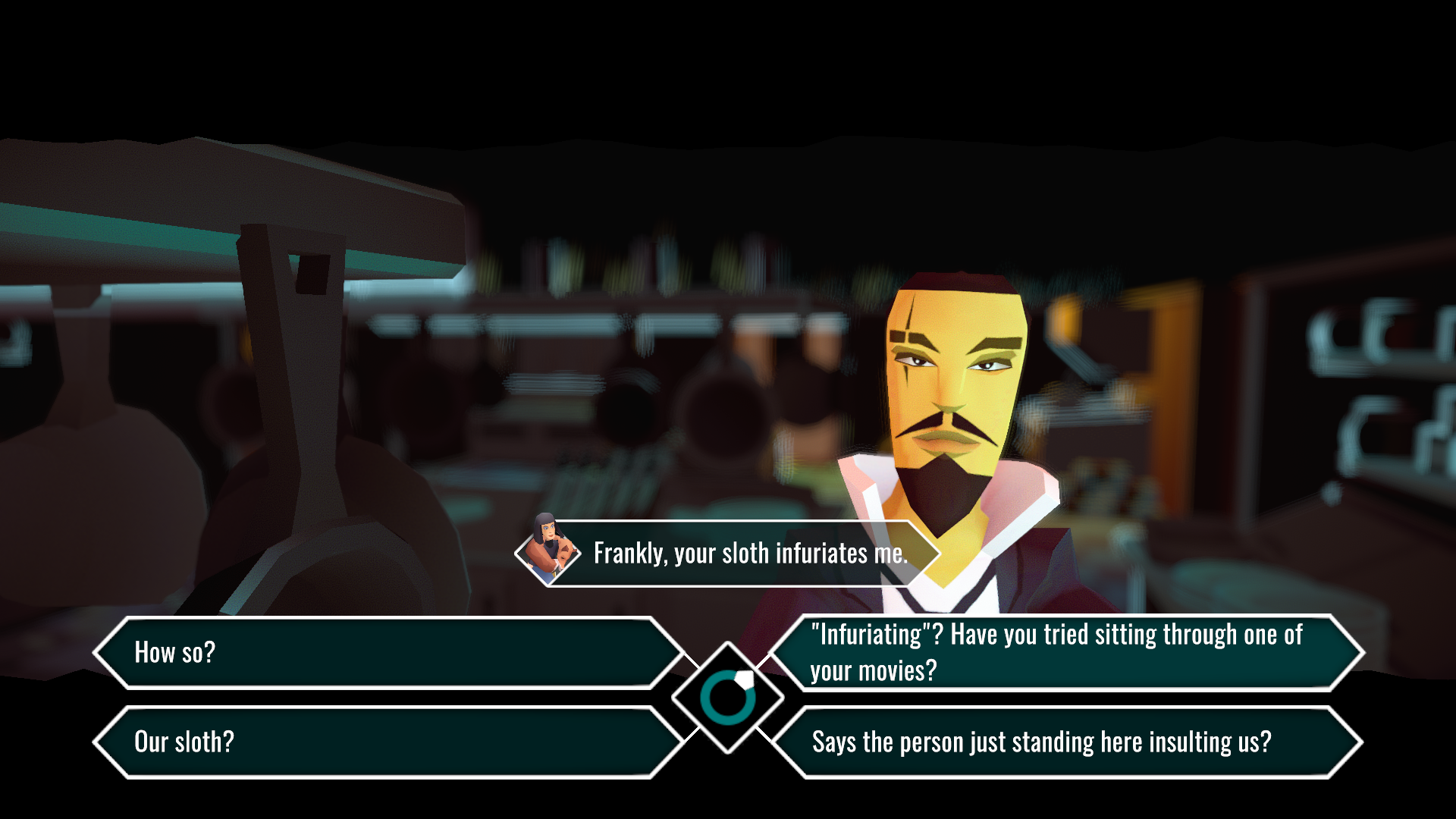 Whoever got Lena on their side, PM me. I need to have a pint with ya.
The game easily falls in the box labelled high difficulty and I'm totally okay with that. Unlike in Bloody Trapland 2 you actually get to play your characters instead of doing one and the same thing over and over again. You even get to revisit old levels to strengthen yourself if you really feel too weak for the challenges ahead. Having to manage your weapons and action points to either sneak past the deadly monsters or fight your way through them is tactical food for brain and only your brain might not be hungry after being served a rather bland story as a starter. 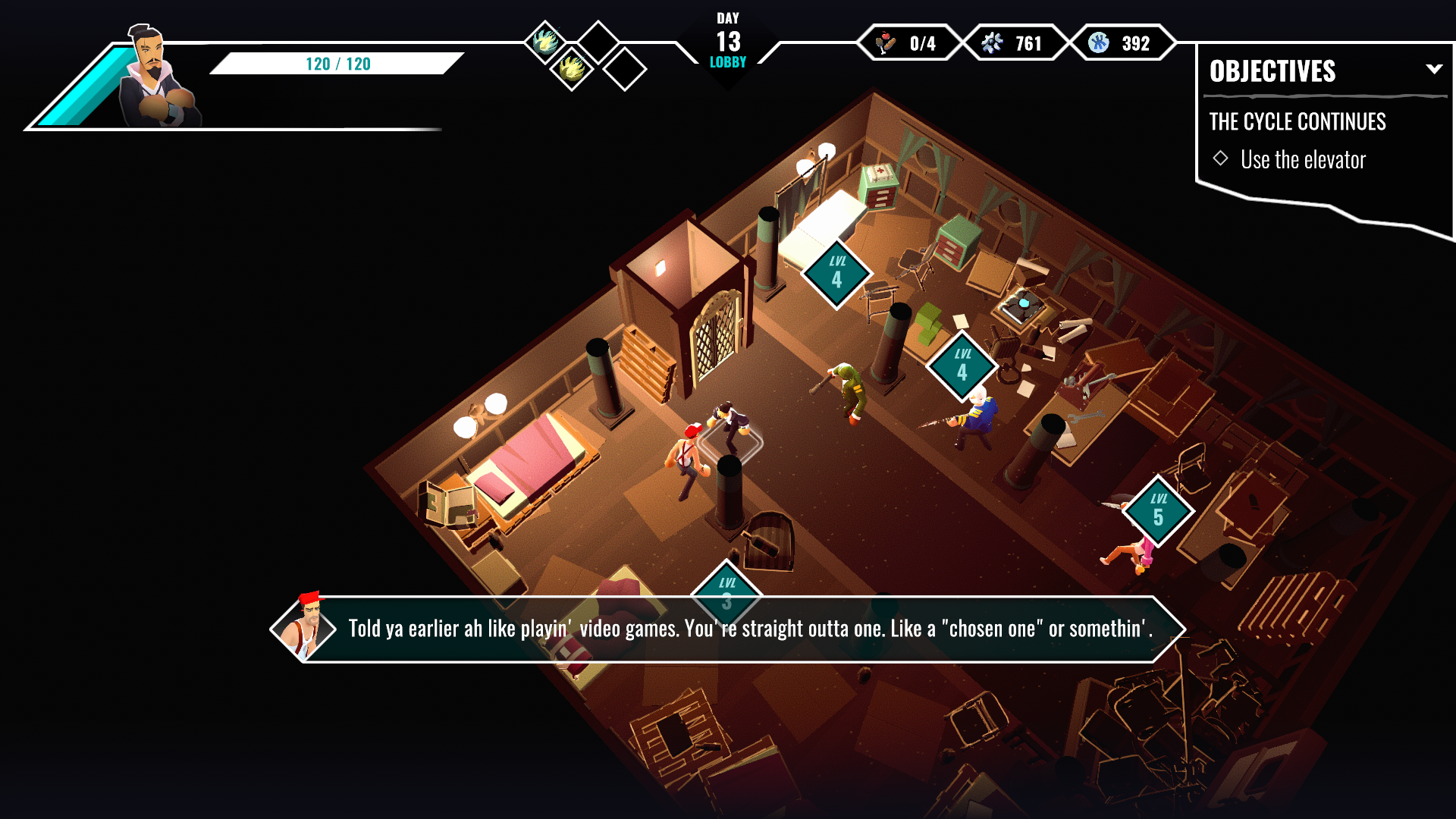 Clicheic, but at least self-aware.
There is you and a deep, scary voice, which I assume is the villain. There's also a painfully predictable plot twist, but the main problem with the game's story is that it's picked up only when a cutscene plays, which there is not many of. Most of the time you will wander around decks, killing monsters, meeting survivors, asking if they know anything about what's happening on the ship and finding out they know as much as you do at best. Each level looks the same except for maybe their size and types of monsters you can encounter. Each level will eventually give you one and the same main quest which in any other RPG would be a forgettable delivery task and that doesn't help either. This game just doesn't care to tell its own story and chances are you won't care to blow that foghorn either. And that's too bad, cause potential was for a solid turn-based RPG for Cthulhu geeks who seek to spend their evenings alternating between shaking with Dread and smashing their keyboard after a seventh death on the same level. But Dread Nautical: No Backsies is not quite worthy of breaking my hardware.
Pros:
+ difficult, but fair
+ nice ambient soundtrack
+ good voice acting and likeable characters
Cons:
- questionable key bindings here and there
- detailed graphics where it doesn't matter and angular where it does
- elevator plot -- story that's being told only in between levels
- same task in same-ish levels
- mandatory ironman mode!
Graphics: 4/10
Sound: 9/10
Story: 2/10
Playability: 7/10
Overall: 5/10
Chances are you've played and actually liked Dark Quest 2. If so, then do try out Dread Nautical: No Backsies. I think it's a better game despite all.