Not for Broadcast Review

FMV has fell out of popularity in an era with more detailed and quality 3D models, and is only making a resurgence recently with the indie community. It's a medium that can better portray characters and create a connection between the player and the story, but the problem lies with player engagement because the gameplay relies on what scenes are recorded which limits player agency. One such FMV game is being developed by NotGames, it's called Not For Broadcast

The story starts as the player character (Alex) is deceived into taking his friends job as he moves out of the country, only providing a tutorial in his absence over the phone as he attends a party. The game then continues a little over a year, following different stories with an overarching plot following the actions of a new radical political party coming into power. The game for most part handles its subjects with satire, taking the piss out of journalists, celebrities, politicians, and their portrayal of events by media. The themes present only become more distressed when Advance (the new political party) begins enacting policies that begin to negatively effect the populace, and continues to more hostile as time goes on. Alex also being the broadcast technician, is forced to make choices that will effect the public perception and the story as a whole.

Motivations aren't so clear cut either, because the player is the technician for the studio, he has access to the recordings of each broadcast, which can be used to listen in on conversations that couldn't be heard before during gameplay. Conversations in which people will express themselves differently when off camera, delineating their character. It also does have some heavy hitting moments that I don't want to describe because they genuinely got me off guard when they happened, and were effective playing on the rising tension within the public. Overall it's a game that doesn't take the subjects it covers too seriously, but does have some great moments that culminate from past events, being a product of growing civil unrest. 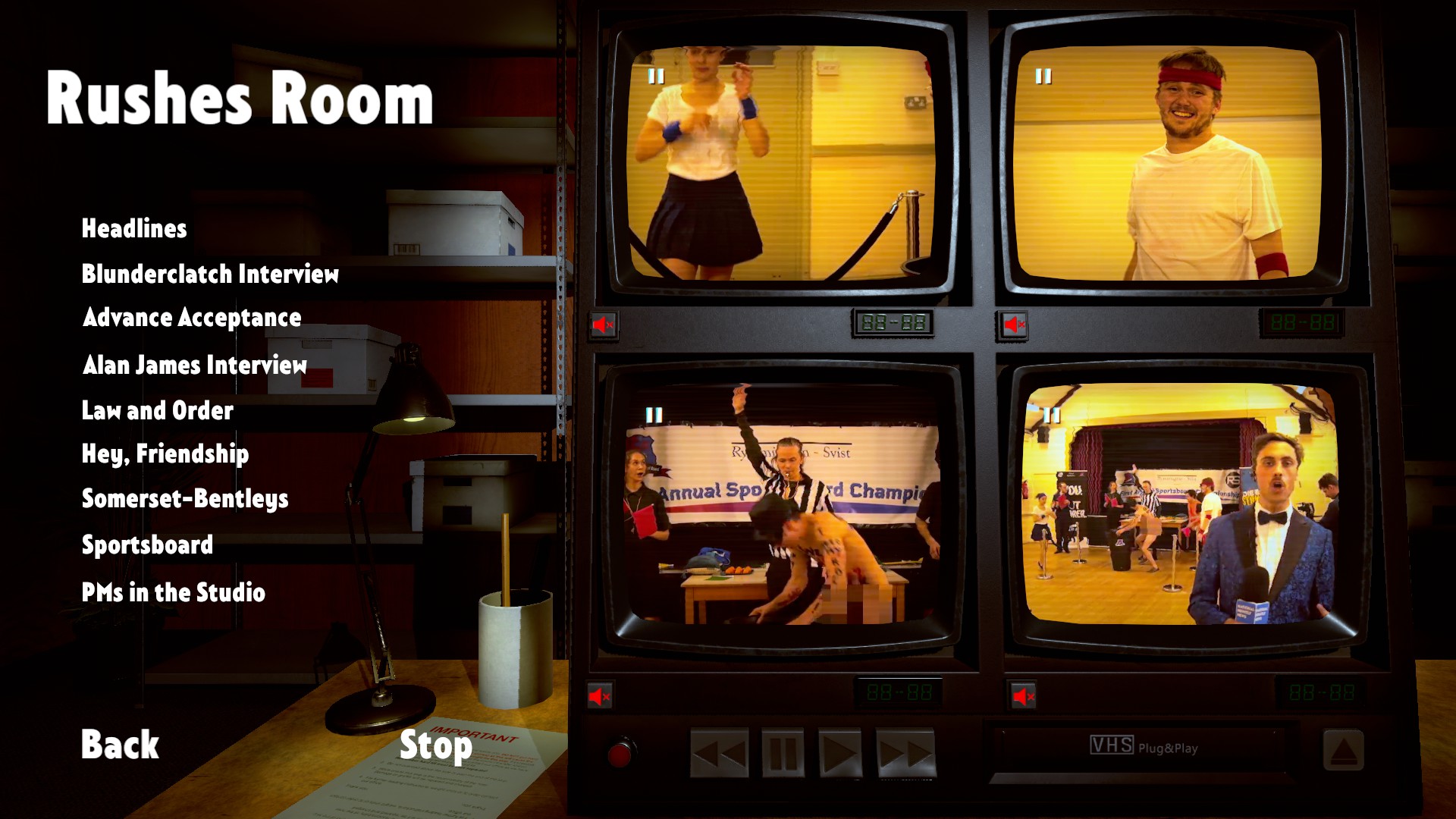 The gameplay is simple, don't run the broadcast into the ground while random events attempt to ruin Alex's day, all the while trying not to be -

The player is tasked with keeping track of different aspects of the broadcast, that being managing the signal, choosing the camera being displayed on the broadcast, playing the ads, and dealing with other problems as they show up, which may include but not limited to, a thunderstorm causing a current to run through the equipment that may or may not cause brain damage, stopping very vital coils that when overheated blows out the equipment's breaker from overheating, and fighting hallucinations from both killing you and eating the satellite dish outside your window, not in that order. Joking aside the game itself is pretty simple but it gets hard to manage the different aspects while dealing with events as they pop up.  It's something that makes the player put themselves in the shoes of a guy who has no idea what he's doing and is improvising for the most part, and contributes well to the themes of the story, but not much else. 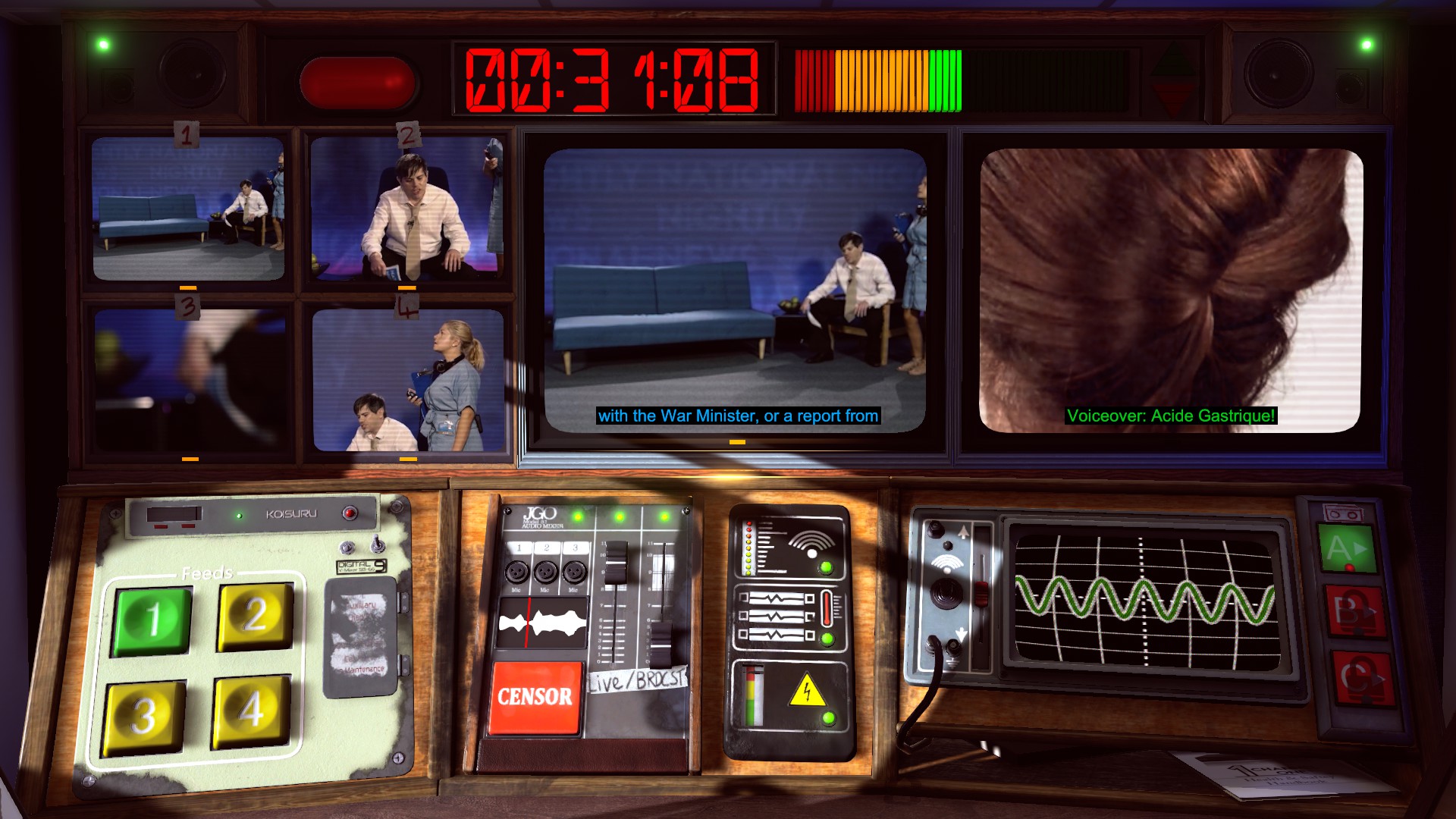 There isn't much of a soundtrack, and what is there is diegetic. There are times where the news team will bring on a musician to preform with varying levels of quality. For the most part it is the sound from the equipment within the players office and from the broadcast itself. Though there is a soft static filter overlapped with the audio from the broadcast to make it feel more like being in a isolated room with multiple screens. If I remember correctly there is one part in the game where a synthetic buzzing fades in to emphasize tension, but for the most part its just Alex and the screens in front of him.

The gameplay in itself is a challenge in dexterity, attention, and decision making, remaining that way for the entirety of the game. The reason to stay and play it all the way through is the story. Without being heavy handed, they cover multiple topics with a lighthearted attitude, only reeling it back in when Advance proceeds with more questionable actions and tensions start to rise. Personally, I did not get hooked by it and had to peck at it, but I'm pretty happy that I did because I enjoyed multiple specific moments specifically because it has a great sense of pacing and progression. Just know that the gameplay is essentially juggling multiple variables and the story is about a satirical take on the medias portrayal of subjects while also challenging the players morality, if that doesn't sound entertaining save your money and buy something else.

As for the product itself, I would give it an 8/10, mostly for the visual novel esque sections that happen in between the gameplay setpieces that came off as pretty bland and strict in impact, though it's not something that stays around long enough to be annoying. Again, definitely worth a buy if the concept sounds interesting, otherwise you will probably it because the gameplay is not inherently engaging enough to be something that makes or breaks the entire package, it's baked in as a device of the narrative instead, which in turn makes it more a device to further engage the player in the world.

No comments yet
categories:
Most popular
Latest comments
Topic tags
PC Game Not For Broadcast Review