If FlatOut and Destruction Derby had a baby, it would be the gorgeous but badly behaved Trail Out. The new game from developer Good Boys is the stuff that homages are made of; here’s a true arcade racing experience where physics come first, backed up by a terrific dose of mayhem, and sprinkled with a cheesy storyline. These ingredients are almost flawlessly mixed into one of my favorite racing games of recent years, a spectacle that is as enjoyable to play as it is to watch, a rare feat for any game. 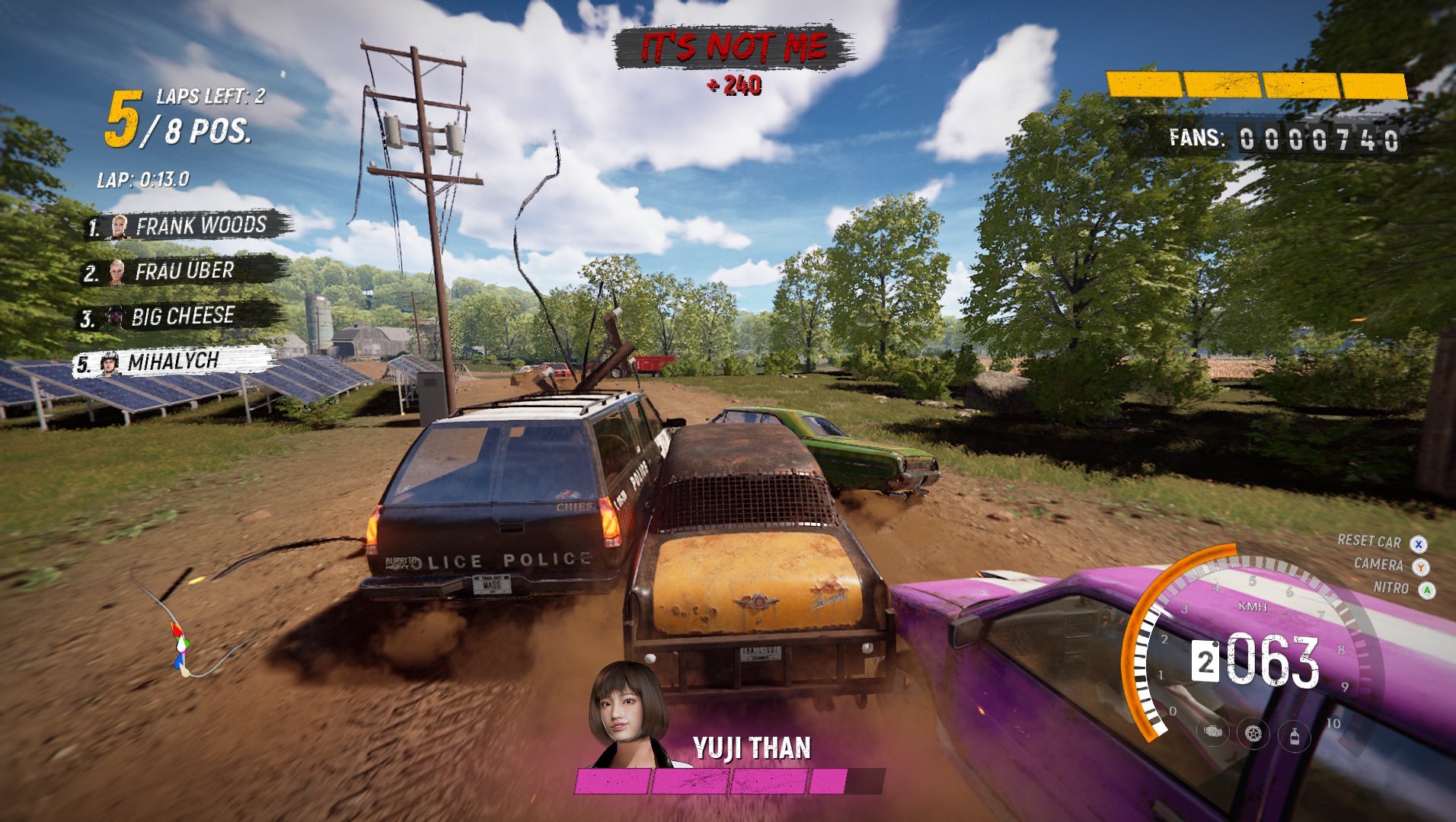 First, some context to Trail Out and the brains behind it. Without letting this in any shape or form weigh into the review, this game was created by a team comprised of four developers. A racing game that easily rivals with the best in the field surprisingly turns out to be the work of such a small but clearly talented group.

With that sidenote out of the way, let’s get into the main event and examine this new arcade racing game. Instead of just placing you in a barebones career mode, it gives you an identity and a motivation to join the Trail Out festival. You step into the rugged shoes of Mihalych, a former stuntman and mountain climber from Belarus in search of fame and fortune. Mihalych is the kind of protagonist that would be more suited to any Grand Theft Auto episode instead of this racing game, moving and sounding like a drunk mobster with anger issues. He comes off as utterly unlikeable – even considering that the rest of the cast is filled with stereotypes and unpleasant personalities, he manages to take the top spot without much effort.

There’s no denying that Trail Out’s premise is over the top, often bordering on low-budget indie movie territory from a first-time director with little grasp of the basic concepts behind such a project. Most of it is clearly intentional and your enjoyment may vary according to how much you like to watch bad characters talking smack with average to mediocre voice acting. But when all is said and done, Mihalych just has this nauseating aura to him that doesn’t do the game any favors. Luckily, you’re only seeing his ugly mug during the breaks from the events – this is a racing game after all.

The Trail Out festival works in a somewhat linear way, although there are opportunities to test your skills in a different selection of racing events. There are eight contestants in total, and you must reach a specific number of fans and medals to earn the right to face the next opponent in line. Racing, crashing, drifting, ranking on the top spots, and the like will increase your number of fans, while reaching at least third place earns you medals. Battles against your opponents can be quite cinematic, with taunts and threats, often divided into several stages, and more akin to an actual boss fight than you would expect in a racing game. 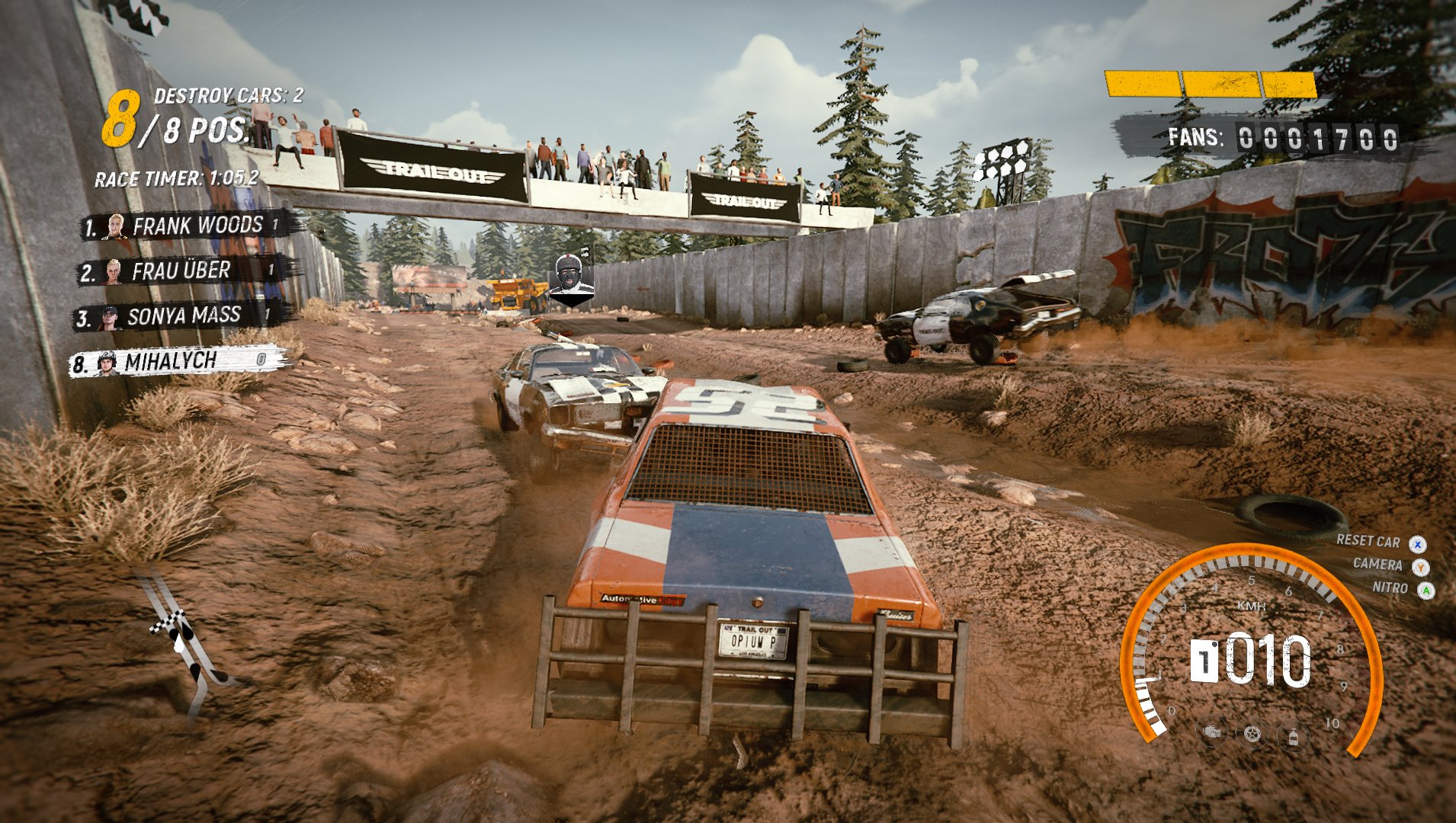 As you may gather from the core gameplay loop, there is some grind to Trail Out. There’s no escaping a certain repetition as you earn fans, money to buy new cars and car parts, strive for the medals, and finally unlock the boss battle. But while this may sound like a chore in many games, the gameplay here is so frantic, so addictive, that I haven’t felt bored in the slightest while taking a shot at a specific race for the umpteenth time. Races feel organic, exciting, with AI drivers that battle for the top spots, randomly crash on one another and on the environment just because they are actually trying to get to the lead. They feel like real drivers who are unpredictable, flawed, often taken off course by some hazardous timing in a crossroad or a miscalculated bend; the races are exhilarating in all their gloriously unexpected genuineness.

Furthermore, Trail Out has a terrific physics system that puts emphasis on the arcade feel and the chaotic nature of it all. There are so many things that you can crash into and create true anarchy in a circuit. It’s completely over the top in a fun, exceptionally wild way, a genuine spectacle to behold. There’s such a wide diversity of object collision reactions for each race that you’re bound to find some favorites, such as the gas cannisters that start flying all over the place before resulting in several explosions that sound like thunder bursting right next to you, bringing an entire warehouse or barn down, and are sure to shake your screen as well. Crash into a rival and you’ll see their health drop, with screen and music slowdown to accentuate the hit. Take too much damage and your car performance will suffer, so you can’t be entirely reckless during the race.

It's remarkable that, among the several car perspectives, a cockpit view wasn’t forgotten. Not only that, but it’s extremely detailed and immersive, putting a very different spin in all the racing chaos. It’s a definite plus for lovers of strong emotions, but it won’t be the best way to effectively perform on the track, as you need an exterior view to better grasp your surroundings and the incoming dangers.

Crashing My Day Away 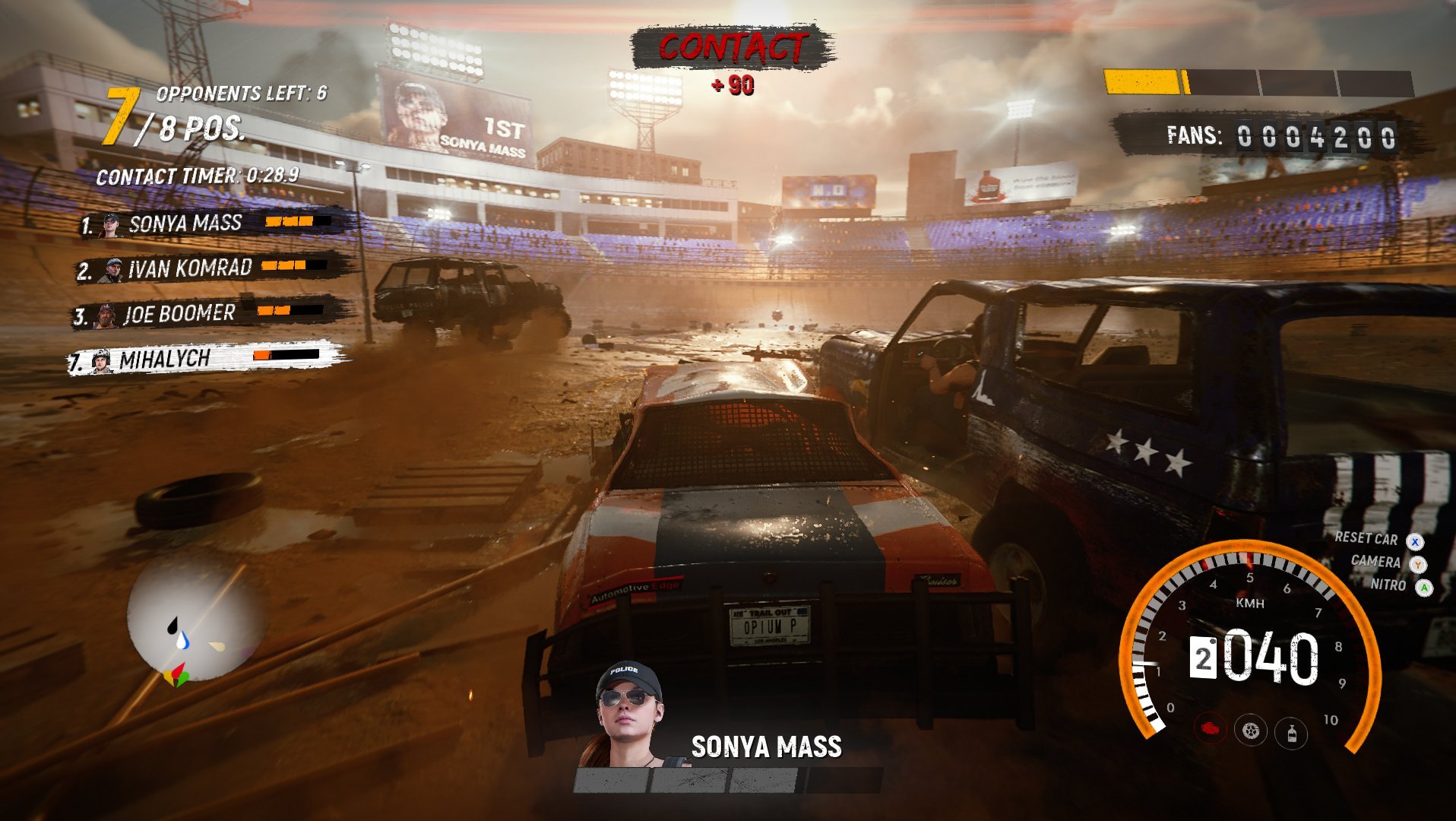 Trail Out isn’t all about doing laps on a traditional circuit. There are various game modes that will put your driving and crashing skills to the test, with one of my favorites being the Derby modes. Set in one of a selection of arenas that will quickly be turned into indiscriminate piles of rubble, this is Destruction Derby at its best. Escape the rage of other drivers and hit them at full speed for the most points, while indulging in the chaotic spectacle that is unfolding before your eyes. Other events may place you in racetracks with crossroads for increased mayhem and unpredictable outcomes, and there’s even the now classic stunt mode where you must throw your pilot through the windshield to play giant human bowling or dart games.

The creativity fueling each track is another obvious highlight. There are several tracks in very different locations, from old rural villages to the Grand Canyon, the docks, the Los Angeles streets, San Francisco downtown with its iconic steep streets and cable cars, and more. The circuits are not only beautifully rendered, with some terrific sights to behold for the few actual seconds when you can appreciate them, the amount of detail and hazards placed into each one is breathtaking. From moving trains to several shortcuts that spice up the races, there is so much to enjoy and experiment with that the aforementioned grind won’t become a problem. Trail Out not only plays very well, it is also a looker that puts the Unreal Engine 4 to fantastic use. If there’s one negative remark in this regard, that would be the noticeable texture pop-up as you first enter a track, but that’s a matter of a second, no more.

Races are accompanied by a hard-hitting soundtrack from a few bands that I’m pretty sure are unknown to most of you. Still, they riff hard and add that extra edge to the races, even the one where the lead singer sounds like Nickelback’s, if Nickelback played headbanging hard rock songs.

The way that the voiced dialogue is completely out of sync with the English subtitles does bother me though. It’s not a word or two that are distinct here and there; most of the time the voices are saying a completely different thing than what the text displays, even if the meaning ends up being the same. An attentive eye could have fixed this issue in little time.

All this praise doesn’t mean that Trail Out is perfect. The most glaring flaw is the lack of a true online multiplayer mode, with the current version offering local split-screen gameplay and Steam Together functionality. However, given the frequent patch releases, my guess is that a fully-fledged online mode is already in the works. Furthermore, some of the prerequisite cars for a specific event, such as an SUV race, may have twitchier physics than the rest, giving you a feel that is somewhat at odds with the fine arcade racing that is seen otherwise. 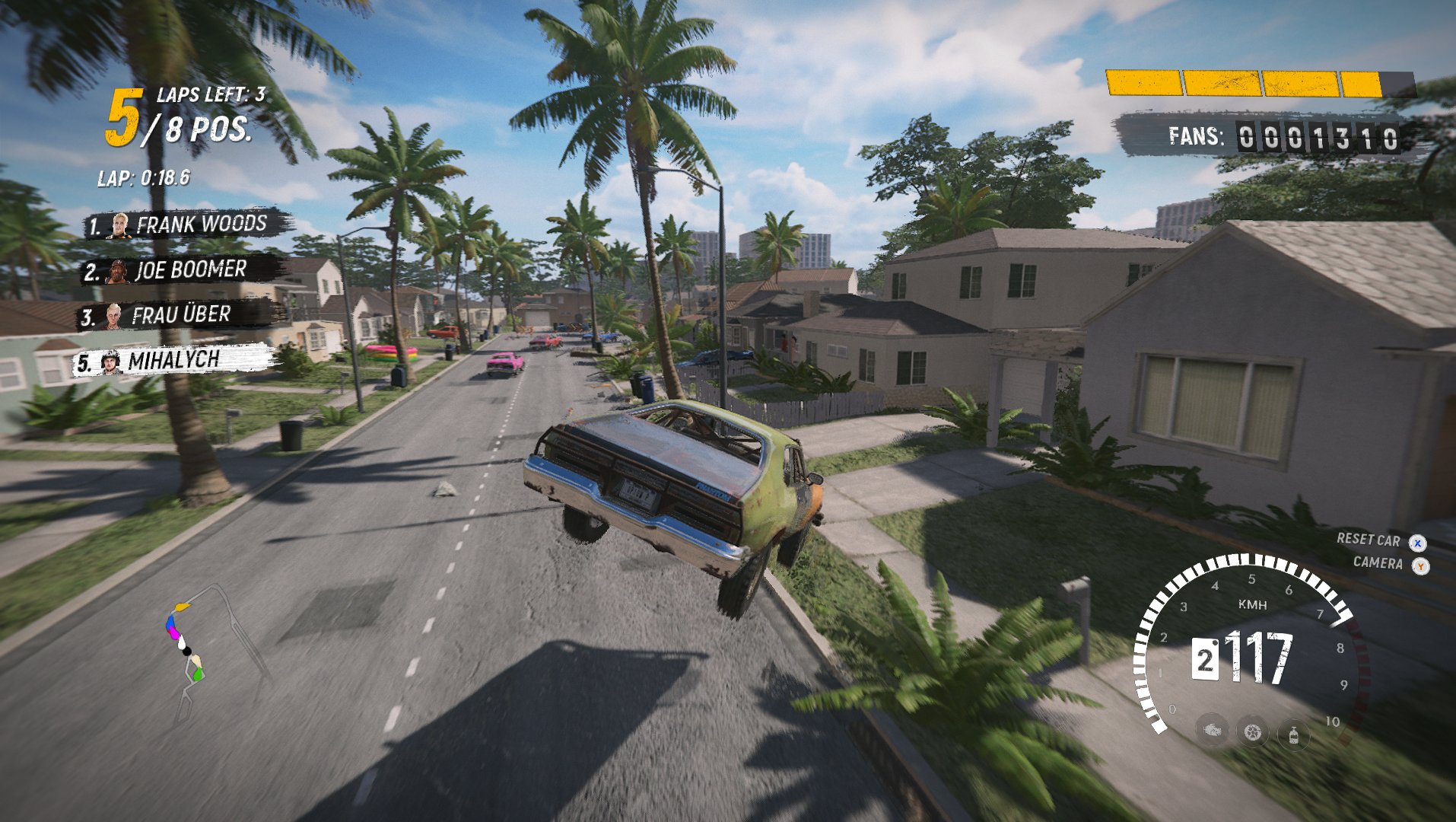 As I was typing these words, I had to pause several times to have just one more go. I felt the urge to grab the controller and get back into those frantic events, pushing my opposition into chasms and incoming traffic while maniacally laughing to the top positions. It’s a rare feeling, but one that testifies to the addictiveness of this game, a supercharged FlatOut in all regards, a pure joy to play and to watch. It may not be perfect, but in terms of sheer entertainment it leaves most of the competition eating its dust.