Sometimes the greatest hits come from the most unsuspecting of places. Such is the case with Broken Pieces, the work of a new studio comprised of five people with the ambition and skill to pull it off. Elseware Experience created an engrossing adventure that is sure to please fans of Silent Hill and similar supernatural thrillers, delving into a mystery that is much bigger than the quaint French coastal village where the events take place. There’s even a shady cult thrown in for good measure, so you surely know that something bizarre is going on.

Alone in the Dark 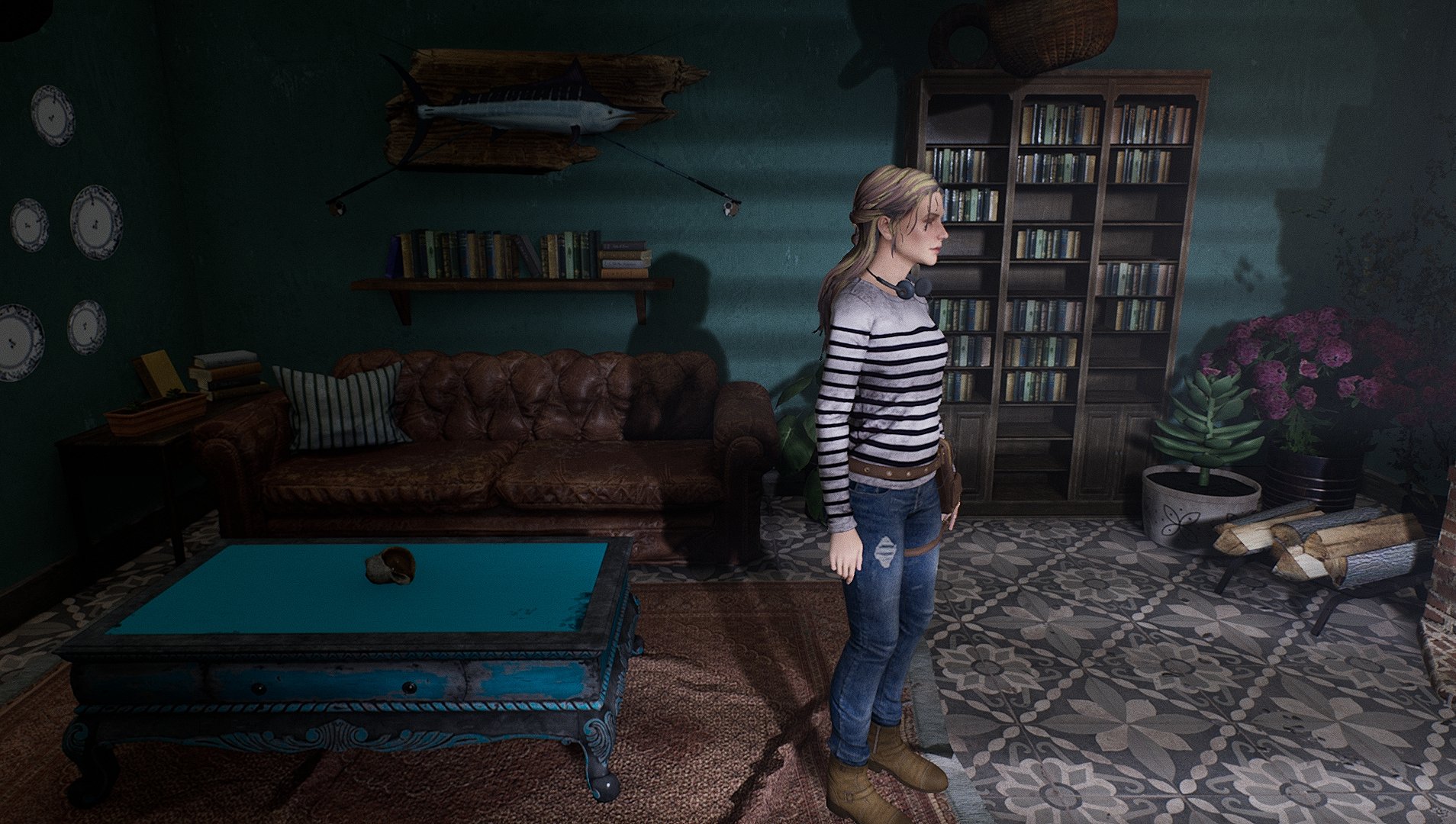 Elise and her fiancée Pierre decided to exchange the busy urban life for a peaceful seaside village, or so they thought. Elise is now stuck in a loop in Saint-Exil, Pierre and all the other villagers are nowhere to be seen, and there is a paranormal phenomenon going on that requires her to get to bed before nighttime. Apparently, the lighthouse may be connected to these terrible events and haunting dreams, so this is a good place to start your quest.

Broken Pieces follows the template of classic horror adventures such as Silent Hill, Alone in the Dark, and the first Resident Evil games. You control Elise through houses, streets, and other locations by means of a clever camera system that allows you to investigate the same scene in two different camera angles, besides a first-person perspective in case you want to check something closer or just appreciate the stunning details. This freedom to switch angles at any time enhances the immersion factor, especially considering that Broken Pieces is a looker and quite a cinematic beast, but also guarantees that you don’t miss a specific item or hint because it was out of sight. Yet, you must tread carefully so that you don’t fail to notice a mandatory trigger here and there.

In terms of narrative, Broken Pieces brings a clever take on the forsaken village by supernatural forces tale. You begin your journey in the dark – almost literally – and slowly but surely will shed some light on the disappearance of Pierre and the rest of the village folk. It’s a gripping adventure that may force you to do some backtracking, but a clever map system allows you to take shortcuts for your frequent home visits. By the end of the 10 hours or so of your first playthrough, you have unearthed a hopeless tale of conspiracy, dread, Pierre’s wonderful music dedicated to Elise, and… puzzle boards and arcade machines.

Despite the urgent plot, Broken Pieces still has the time to throw some distractions your way. Optional missions are one of the highlights, as noted down – or should I say scribbled – in your vital notebook. You may want to grab a restaurant key from the sewer, play a fun arcade game in your attic called Trains of Rage, built by Pierre especially for you, or solve board puzzles that you find in some locations of Saint-Exil. Taking a break from the main storyline ends up being refreshing, as you discover new threads and unlock doors that other players may be unable to.

Now and then you’ll stumble upon a puzzle, most of them very easy to grasp, such as using a circuit breaker to reconnect the electricity to a door, or distracting a crow that has stolen an important key. But there are a couple of puzzles that will require the full use of your grey mass, as they take some learning and a very attentive eye. Take the restaurant task, for example, where a supernatural phenomenon is making some furniture switch locations in regular intervals, and how you’re supposed to use this occurrence and a ray of light to open a secretary nearby. Later on, your musical background – if you have one – will be put to good use as you read a music sheet to play a few organ notes. These puzzles aren’t hard, but they do require attention to detail to understand their inner workings.

Everywhere You Go, Always Take the Weather with You 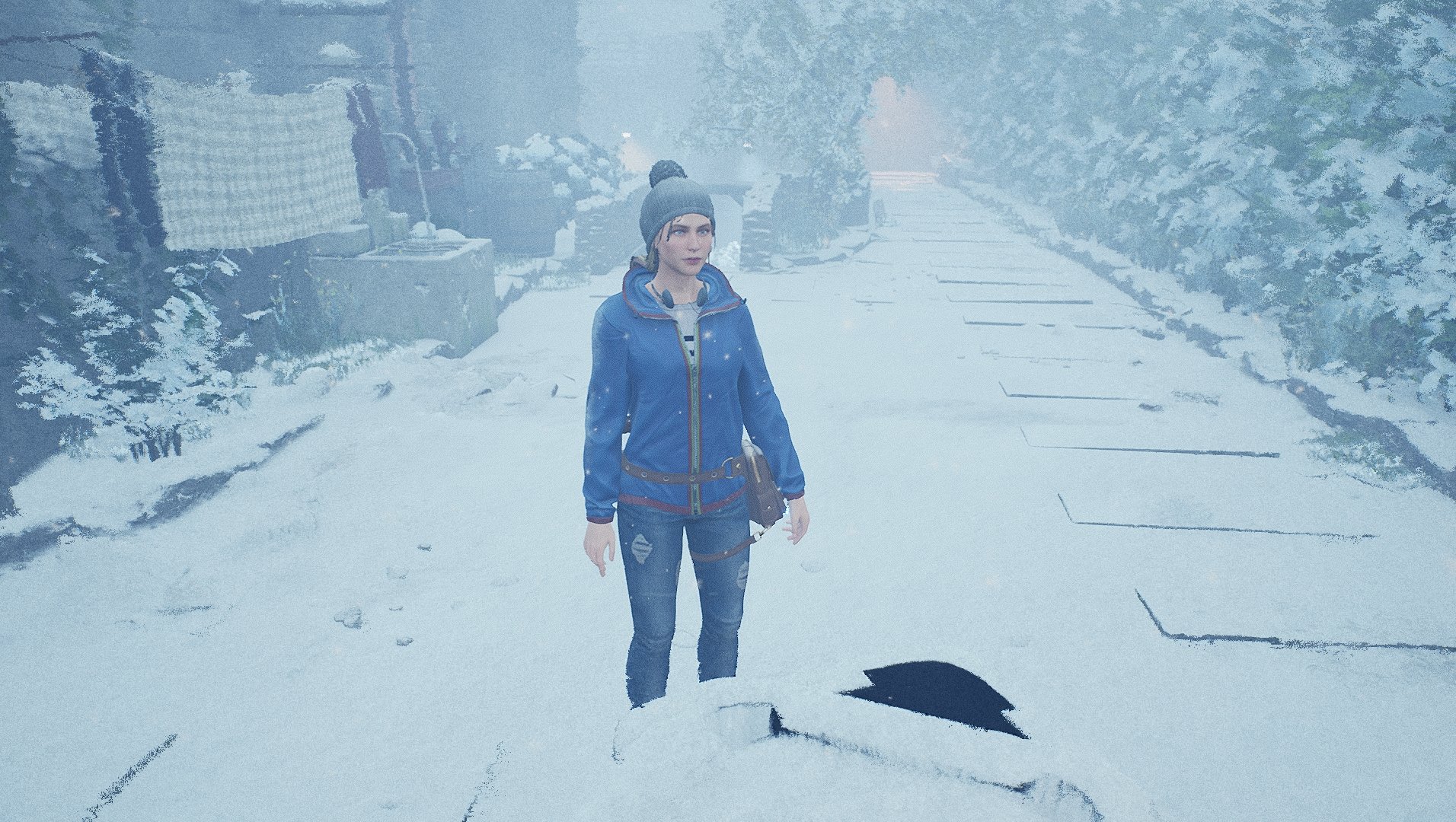 A few hours into your adventure you’ll find out that Elise not only can conjure a brief storm, but she is also capable of switching between summer and winter at will – or at least when she finds one of the various fountains in Saint-Exil and dips her blue rock bracelet (affectionately nicknamed Rocky) into it. This is a clever game mechanic that is used throughout the adventure, as you flip the weather on its feet to overcome obstacles. A swimming pool blocking your way? It will turn into solid ice during the winter. A door blocked by snow? It will melt during the summer. There are many instances where you must think how the environment will react to this duality and experiment with your options.

I have enjoyed this adventure as it was devised by its creators, but you can start the game and choose a mode that focuses on the puzzles and skips most combat sections. Although this may feel like you are playing a trimmed down version of the complete journey and I don’t advise it in the slightest, the plain truth is that combat is the biggest flaw of the game. There is no melee combat, and Elise only has her gun to take out the specters that occasionally block her way, forcing us to engage.

The issue with combat is that it doesn’t feel dynamic; it’s too mechanical, rudimentary, and just not fun enough to be entertaining. It’s all a matter of aiming your shots and firing when the crosshair is at its smallest so that you don’t miss the shot. You can dodge if you time it perfectly and there’s an option to repel the ghosts, but this costs you precious mana (for lack of a better name) from your Rocky. When the path is clear and if you are hurt, you may either go to bed, rest on a bench – which also acts as a save game option – or eat something from the fridge to recover your health. If Broken Pieces had a superior and more in-depth combat system, the game would gain a lot from it; as it stands, it’s a barebones but tolerable diversion from the main exploration.

Speaking of exploration, the limited inventory feels like an unnecessary and bloated way of extending the game’s length through unfair means. Very often you’ll find collectibles and scrap material that you can turn into ammo, but these will quickly fill up your inventory. When push comes to shove, your only choices are either to drop some of your possessions to pick them up later (or just ignore them completely) or backtrack to home and place some of the items inside the chest in the living room. While Elise crafts some ammo from the scraps you place in the chest, this ends up being an artificial ploy that does more harm than good. 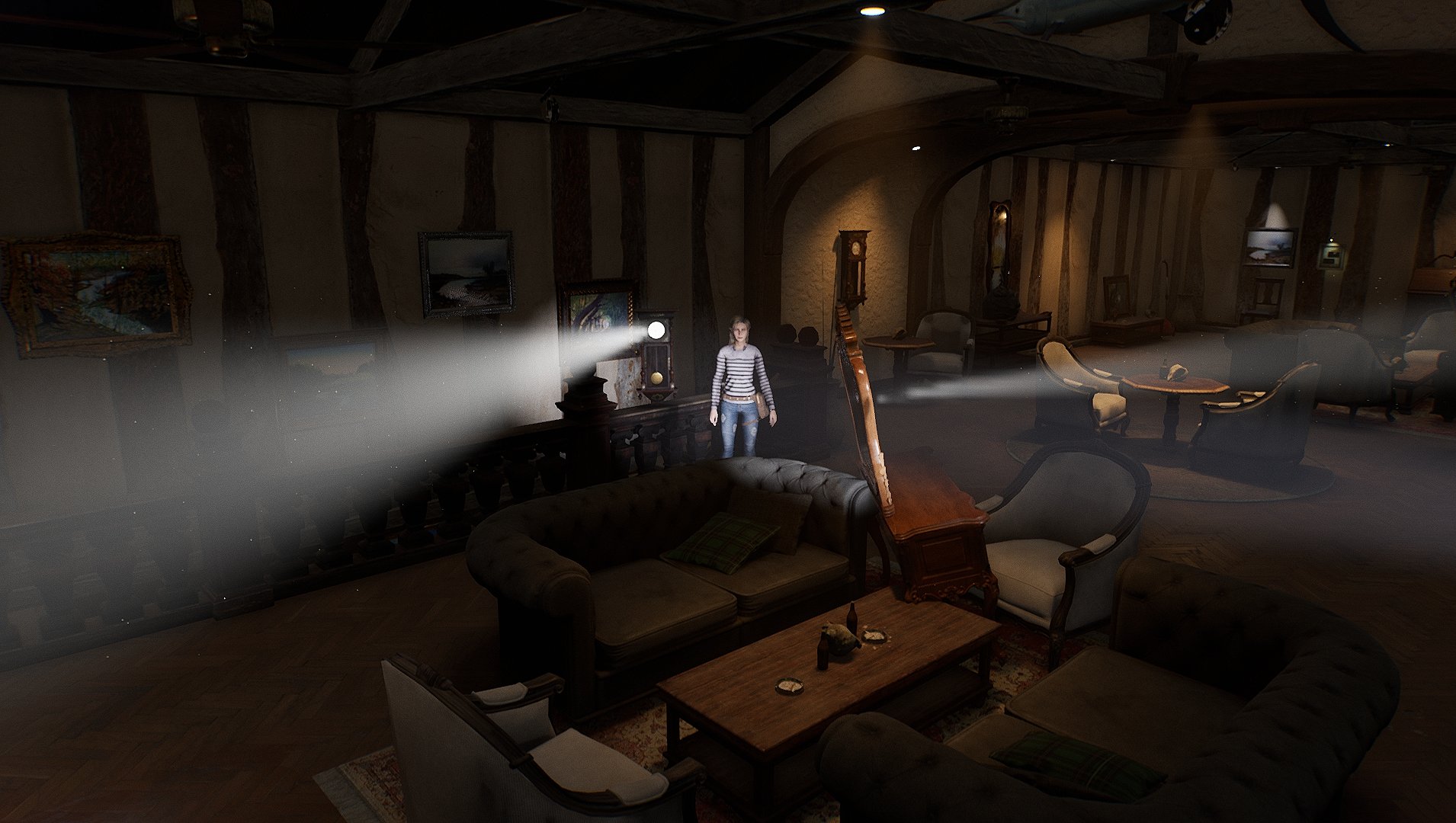 I can completely relate to Elise and Pierre’s desire to move to Saint-Exil. This fictional French coastal village is picturesque, has a certain je ne sais quoi to the parks and small local commerce, and an overall feel of a peaceful place where you could simply enjoy life. The atmosphere is perfectly crafted by the talented hands of Elseware Experience, with impressive scenes that mix the beautiful nature with the supernatural in a troubling but compelling way, hinting at the causes of this mystery while keeping the surprises saved for later.

The interiors that you get to visit are even more extraordinary. The level of detail inside Elise’s house is remarkable, with high quality textures in every corner of the house, right down to the most insignificant item. Her house is a mess that could do with some organizing and cleaning, as Elise herself admits, but every room is filled with mundane things that catch your attention. The same goes for other houses and buildings – without getting into spoilers – that are as cryptic as they are an open invitation to exploration.

Your only real travel companion is a tape player, an ingenious way of discovering new clues and expanding on the lore. Pierre leaves you some messages, but he also composed several tracks for Elise, and you are free to play them while roaming the village. It’s a brilliant soundtrack all-around, comprised of melodic guitar tunes that create a major contrast with the oppressing environment, and this works impeccably. You can listen to music or clue tapes while you are on the move, so you’re never forced to listen to a tape and sit tight until it ends.

Regarding the sounds of Saint-Exil, it’s mostly a minimalistic soundtrack, very moody and effective, with environmental sound effects that really hit you if you’re paying attention. However, if I hear another seagull in my life, I may lose it. 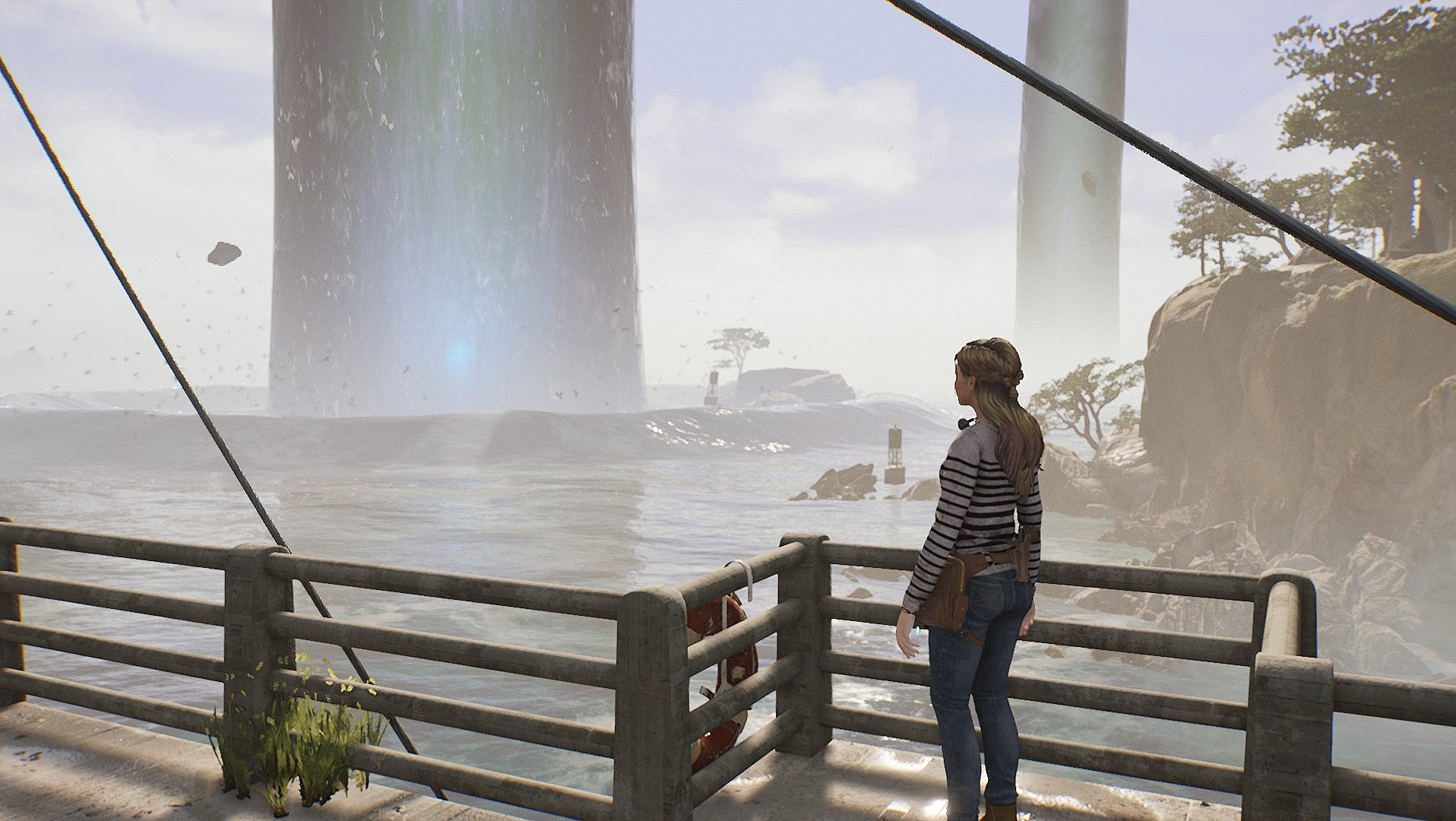 Broken Pieces is an immensely enjoyable psychological thriller from the school of Silent Hill. There’s a compelling mystery to unravel, interesting puzzles that play with Elise’s weather-shifting abilities, and while the ending may feel rushed to some, it’s nonetheless a conclusion that works in the context of things. Combat is the weakest link in the game, but it’s rare enough as to not get on your nerves. In the end, Broken Pieces is a memorable trip into a doomed village that every fan of the genre should visit, and you can be certain of this – you won’t get stuck in traffic anytime soon.