After over 170 games played by over 200 runners for more than 150 consecutive hours and many emotional speeches this year's Awesome Games Done Quick has come to a conclusion raising more than $2.2 million, decimating the previous record set at AGDQ 2015 by nearly $700k.

For those that do not know GDQ is a twice yearly charity event for the Prevent Cancer Foundation that revolves around speedrunning. Runners from all over the world converged at Hilton Washington Dulles, Herndon, Virginia for the seven day event now in to its seventh year.

Alongside the usual classic runs of Mario, Metroid, Kirby and Zelda there was a batch of twenty new games introduced from the last two years. AAA titles such as Doom and Dark Souls 3 nestled up against Indie favorites including Hyper Light Drifter and Salt and Sanctuary.

The PC platform was also on the rise as the most popular means to play with only the classic Nintendo consoles getting close to the same level of attention. Notable absence from the Xbox One and PS4 only running two titles is perhaps telling of the underwhelming performance this generation has provided, where fps and precision are all important to these men and women. 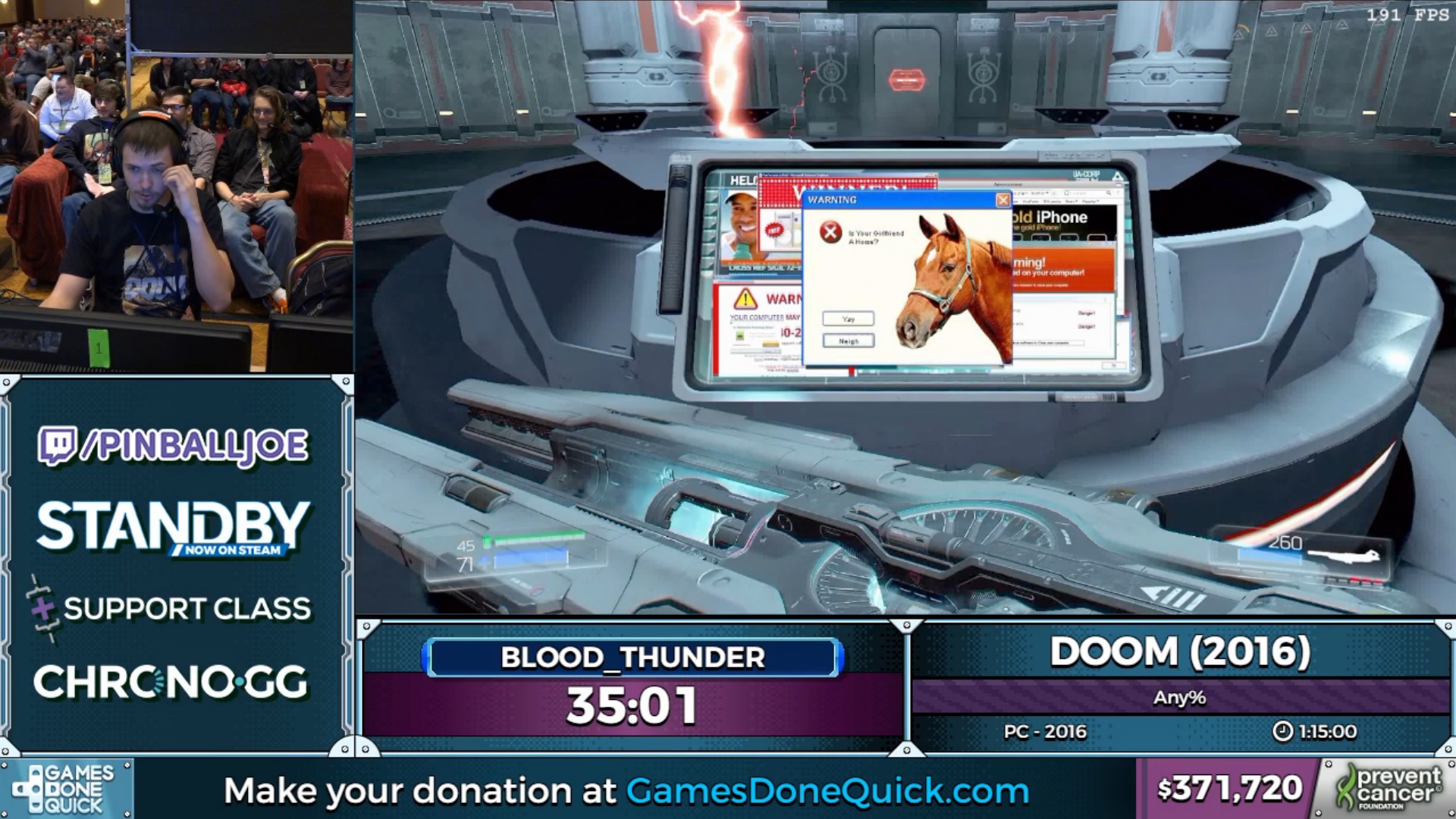 Personal best times were met by many involved and world records set including three on the same day for A Nightmare on Elm Street, The Adventures of Rocky & Bullwhinkle &Friends and Fortified Zone.

As well as the skill based runs there were glitch showcases from games most would think perfectly acceptable. Hitman: Blood Money was shown in a truly broken light,exploiting AI routines. GTA: Vice City made an appearance with the runner not just showing off his helicopter skill but how to manipulate the entire game world to aid you.

Co-op was prevalent this year with titles including Borderlands 2, Left 4 Dead and Secrets of Grindea. This extra emphasis helped reinforce the spirit of cooperation and unity the event portrays.

Special mention to Grimelios who had possibly the worst RNG of the event. Attempting to showcase how fast Salt & Sanctuary can be completed the final maneuver failed four times making a five minute run become ten. 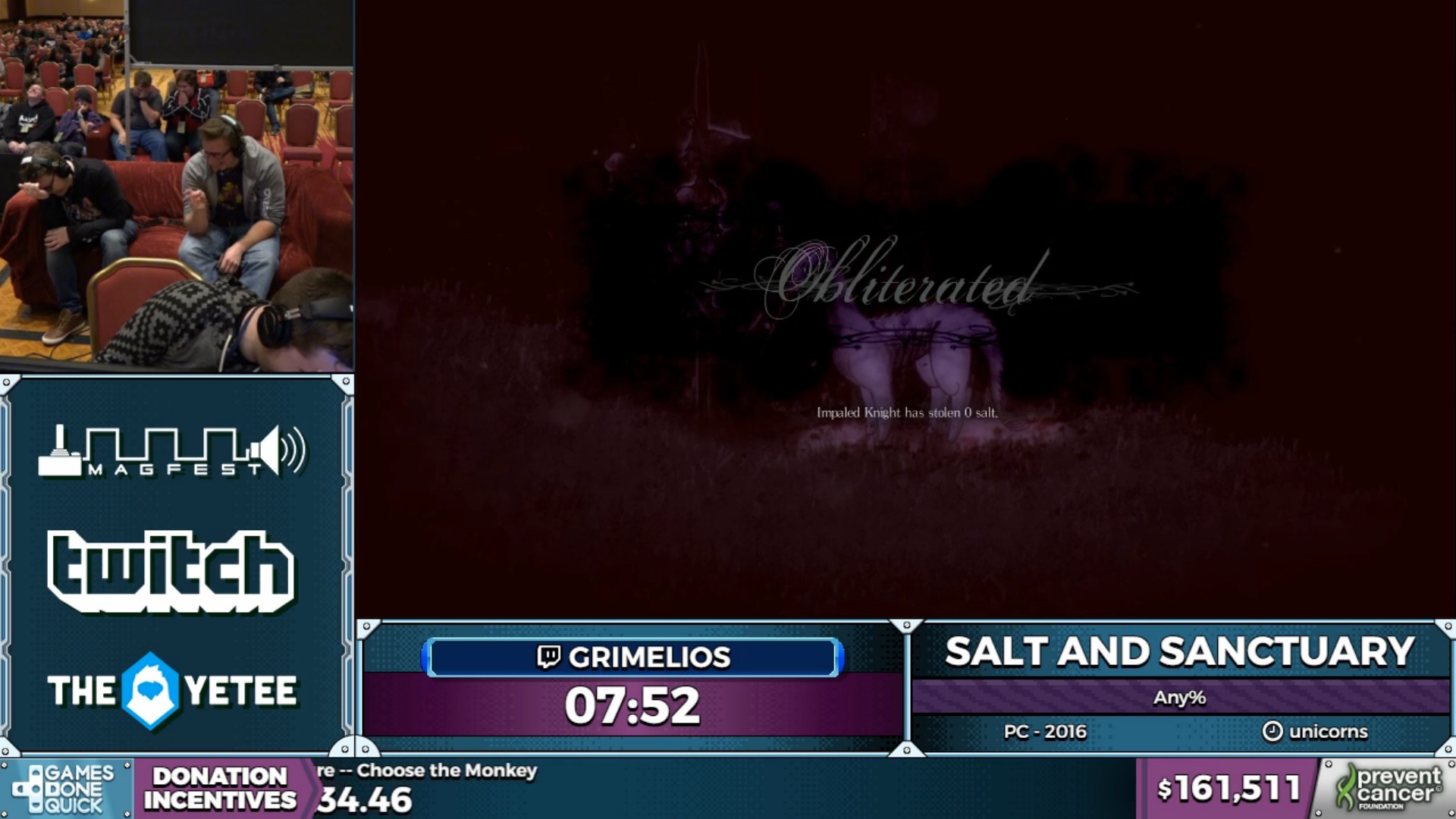 TASbot made a welcome return showcasing how far tool assisted running had come since their last outing including a revenge rematch of Gradius which it had failed at a previous event. Finishing the segment was a heavily modified Skype (Sk'hype) call on hardware which should not be capable of running such a program.

With the total running at $1.17 million with around 10 hours to go the organizers pulled out the big guns.Thanks to Bandai Namco, now one of the sponsors of the event, a huge grab bag of merchandise was being given away, including a limited edition God Eater 2 jacket, 1 of only 10 in the world. All donations over $125 from the moment the loot was revealed were entered into the draw and demand was so frantic the donations system crashed before the Dark Souls 3 run could be started. Unfortunately technical issues marred what could have been a great run, through no fault of the runner, but it is still well worth a watch. 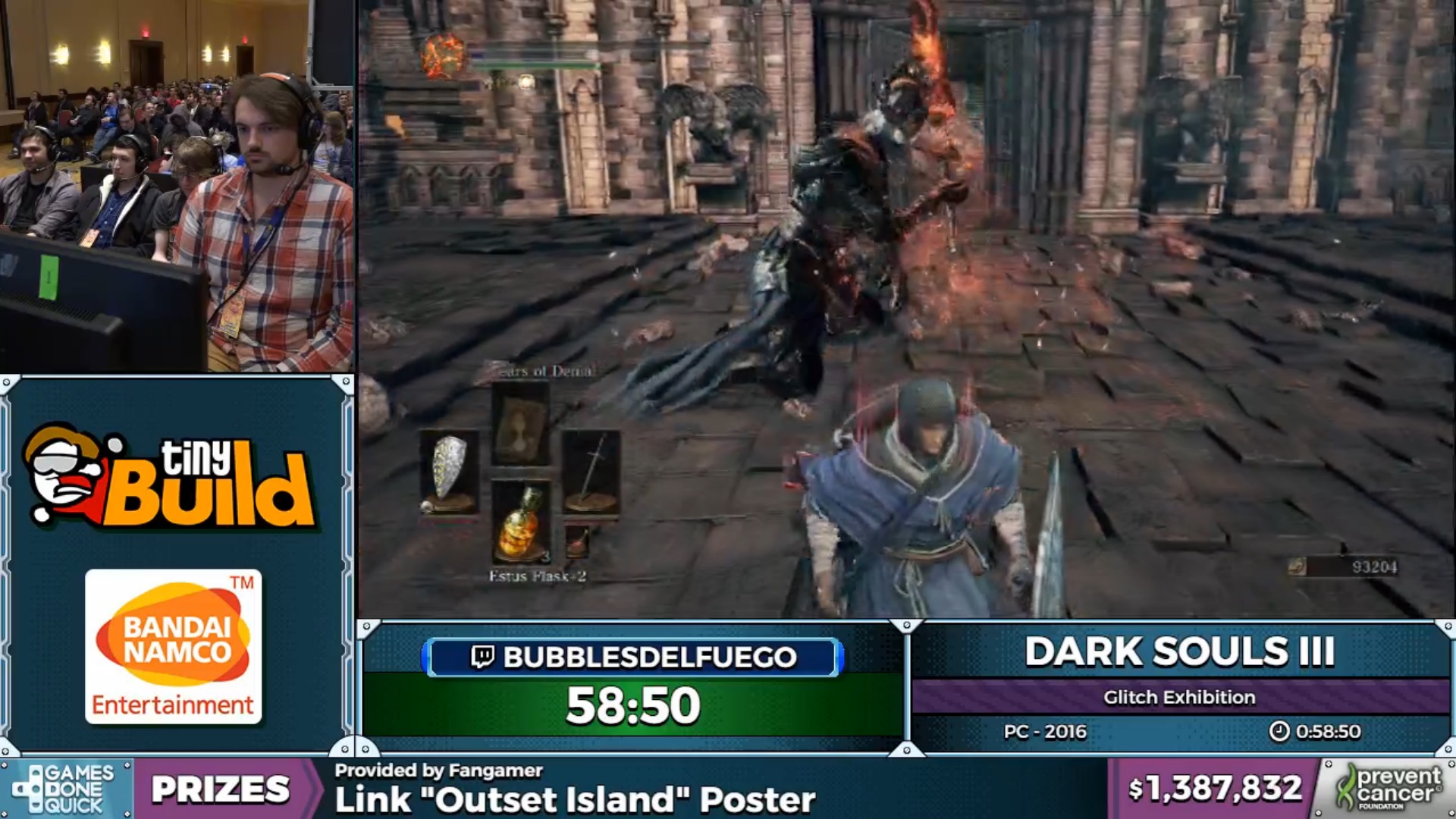 Closing the event was a fitting run of Undertale (True Pacifist ending). Feeling very apt for the event everyone was behind the runner, even having one of the developers on Skype encouraging him and thanking the community for what they have done to the game.

Shovel Knight (Any %) head to head

Salt and Sanctuary (All Bosses)

If you wish to make a donation go to https://gamesdonequick.com/