I'm here to review Aerea. The night before this game was given to me, I was desperately trying to work out a trade with someone to get a copy of this game, and they wouldn't accept anything I offered. Bummer... But then the next day, I wound up talking to SlipSlot for some reason, and the subject of reviewing games came up. Aerea was then given to me to review. WOOT! or was it WOOT-worthy? Turned out it was not, unfortunately... Not for me, anyway. I was left very disappointed in Aerea. I wouldn't say that it's a bad game, but it is definitely not something that I could ever get into. I actually struggled to continue playing enough to give this review a fair shake.

It is advertised as an Action RPG, along with screenshots that would lead you to believe the game mechanics are along the lines of Diablo III, or Victor Vran. This is not exactly the case, however. Technically, you could call it an ARPG, but there are MANY things that leave this game feeling more like an N64 platformer, I will get more into that later in the review.

Aerea's theme is centred around music. This is what had drawn me in to wanting it so badly in the first place. I am an audiophile at heart and the idea of running around with a musical instrument to kill my enemies with appeals to me greatly. As soon as I started the game I was impressed with the high quality music in the menus and game itself, along with how smoothly everything worked.

There are 4 characters to choose from when you start, each having a different instrument with 2 different default attacks, plus a special attack. The only difference between characters really is ranged or melee though. Other than that, they all feel and operate the same. I chose a ranged character first. He had a ranged attack, and a spin kick. Then chose a melee class, he had a "sword attack"(i guess? musical sword?) and a shield. Both special attacks for both characters were about the same. Bunch of shiny "music" in the air taking out enemies.

You start out in a central hub called the concert hall where you take on quests from NPC's, buy items, upgrade your weapons and hop on the airship that takes you to quest areas. Through the tutorial you talk to a few people who set up the plotline and send you around the complex. One thing that bugged me here is, you cannot cancel dialogue no matter how long it is, or if you've already read it. A tutorial that should have taken me 5 minutes took me 15 because of it. 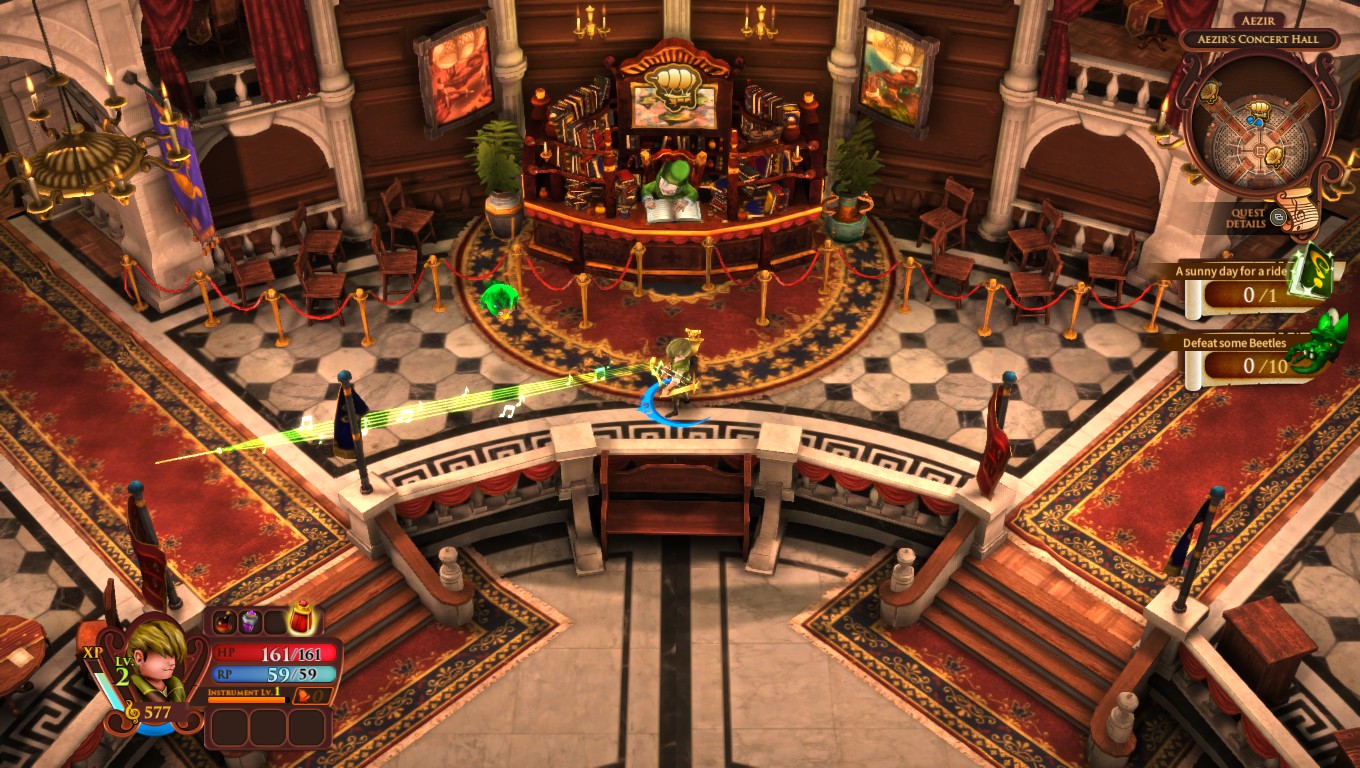 The central hub/concert hall was also VERY large. It took quite a while to walk around the place. It was quite unnecessary. It was at this point that I realized there is no run or roll to get you through places faster, another feature that most ARPG's brandish. The concert hall IS quite beautiful though, I do give it that. The graphics look great and much attention was put into detail. After going through the tutorial you are sent to speak to the NPC at the centre of the complex that controls the airship and quest areas, then set out to run errands for these NPC's. It is after leaving the airship that I realized this game would not be too great. 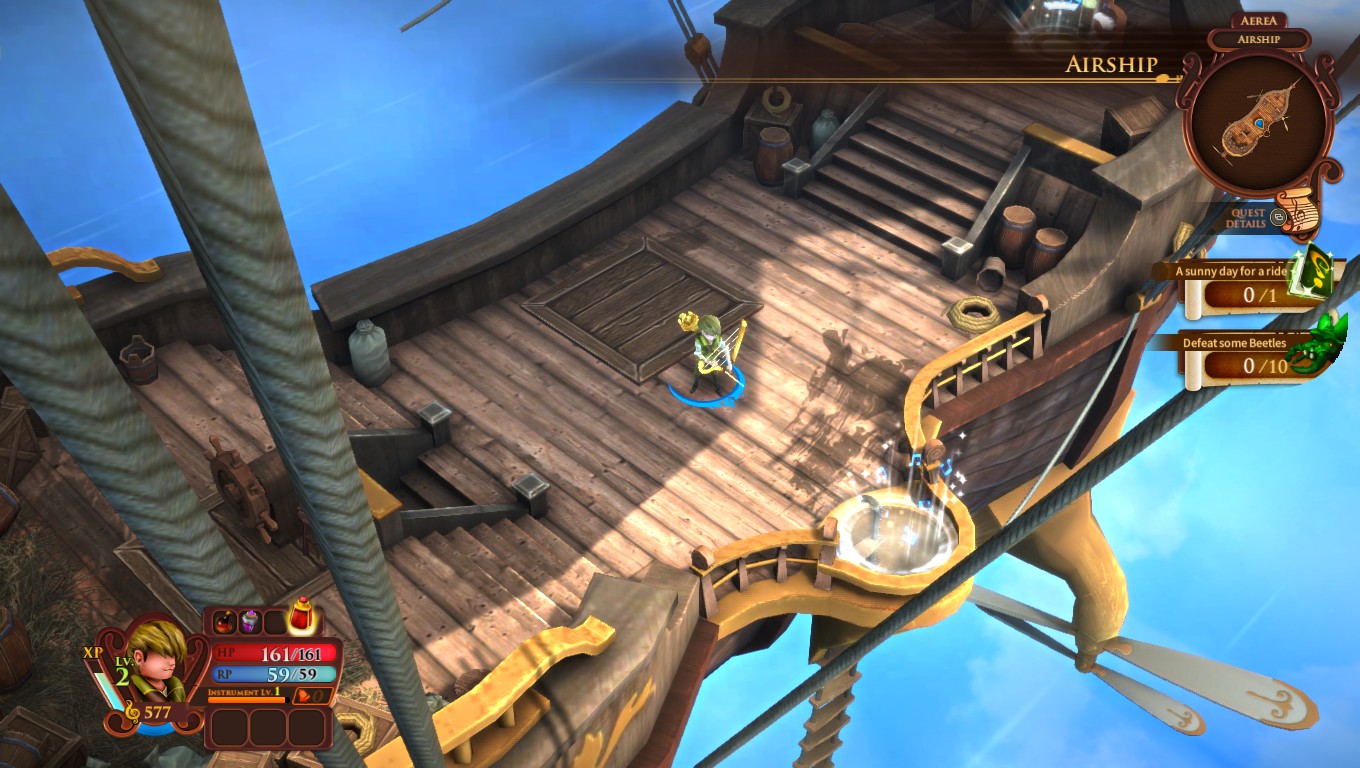 Unlike most Action RPG's, instead of having a large world to explore, EVERYTHING is instanced. even down to each "room" you go to in any area. There are invisible locks on doors and gates, and those locks disappear once you kill everything in the room. Killing enemies also drops coins that you collect to use towards upgrades for your weapons. Also unlike what would you expect of an ARPG, there is no gear drops. Nothing to grind for. That is one of the things that ruined the experience for me. The thrill of picking up that next great weapon or piece of armor you find after combat was missing. The only grinding is to upgrade the weapon you start with. There ARE items though. Health and mana potions, along with buffs. It is impossible to tell what each of these items do until using them though, as there is no inventory or equipment screen to inspect these things. Only small thumbnail images on your HUD. I guess after playing a while you would know what items had what effect, but not before then.There are only 4 item slots, and this is the number of items you are limited to carrying plus they do not stack. If you have 4 health potions, they are going to take up all 4 slots you have for items.

The combat itself is also very stiff and rigid. Even though the controls are tight and responsive, It is a bit difficult to aim with ranged classes, and the hitboxes feel strange with the melee class. Not to mention, the combat is VERY monotonous. There are virtually no differences in fighting one enemy or another. Now and then a larger enemy will spawn that takes more hits to defeat. This is the only difference I have seen. 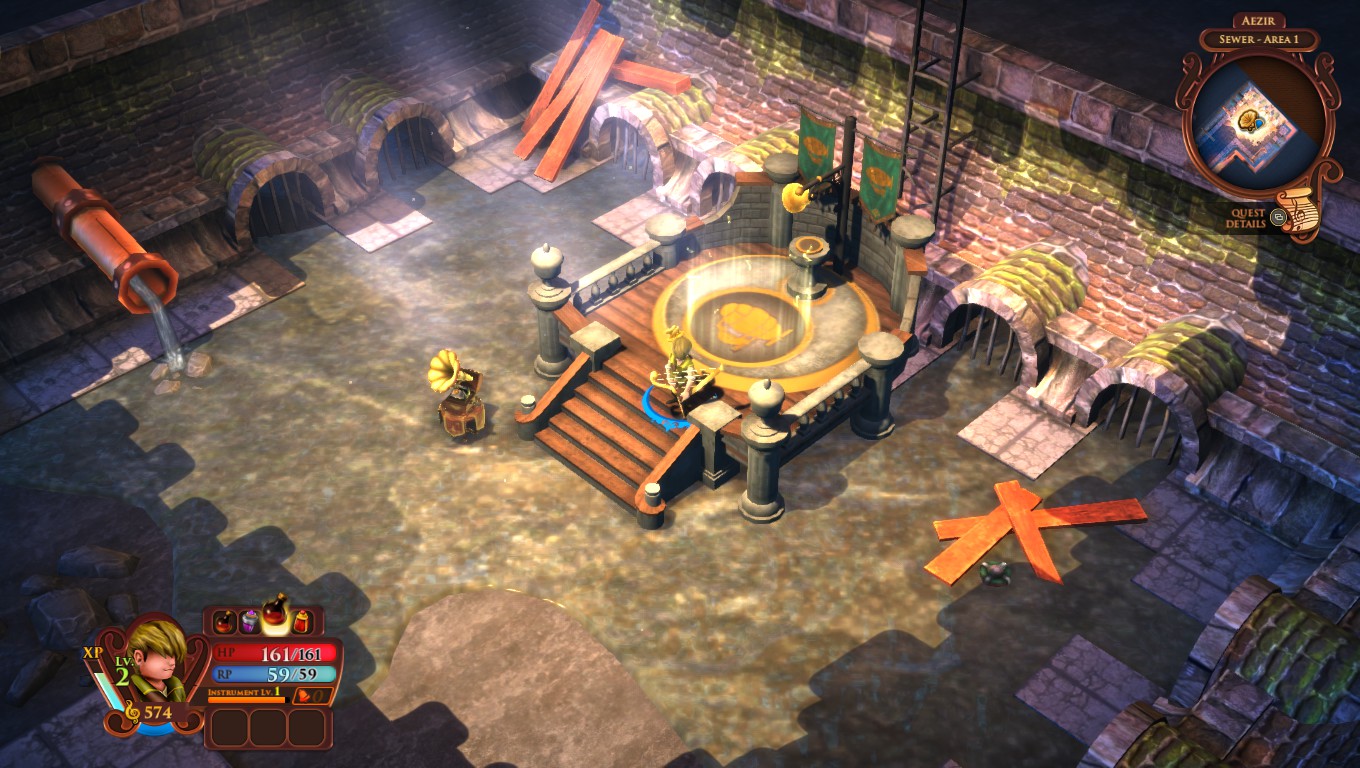 On top of this it seems that no matter what level your character has gotten to, enemies still take the same amount of damage to put down. I got one character to level 17. Then I got onto a character that I had not even tried yet and went straight to the furthest part of the game I had ventured. Combat was still the same difficulty-wise. So my level 0 character could do the exact same things my level 17 character could with ease. Very strange. As any other game in the genre goes, you complete the tasks you are set with, then you return to the quest givers to receive your reward. My reward for my first quest was a potion. I did not get this potion. I'm guessing  because my entire 4 item slots were filled.

This is pretty much the experience of the entire game. What i stated above, rinse and repeat. There is various levels with different atmospheres and such, and different enemies. The storyline was decent enough though, so there is that. I do not want to spoil the entire game for someone who may wish to play this though. So from here instead of describing everything from the rest of my time with the game, I will leave a list of pros and cons.


In my personal opinion of this game I do not consider it very good.
BUT, looking at it objectively it is a pretty decent game and there are plenty of people out there who would love playing it. Someone like me who has been gaming for so long it seems pretty basic. Comes off more like a mobile game or an N64 platformer Spyro the Dragon style. This is not a bad thing, it just does not appeal to me personally.
A younger audience would likely love this game, while most adults would give it a pass unless looking to play something with their kids. GREAT for a family title. Bad for a hardcore gamer.

That being said I'm going to score this twice. Once for my view, second time objectively.

Personally, this game gets a 4/10 from me. It lacks too much of what attracts me to an ARPG in the first place.
Objectively, I'll give it a 7/10. My son would love this, and i would love playing it with him.

It does not deliver in terms of an ARPG like Aerea is advertised to be. But if you come into it expecting a Nintendo style 3D platformer with the platform, you will enjoy it.