Hell hath no fury like Satan with a craving for birthday pie. Such is the premise for new platformer Hell Pie from developer Sluggerfly. This is the perfect time to warn everyone that despite its occasionally harmless cartoon appearance, Hell Pie includes violence, gore, wiggling devil Chef butts, unicorn sacrifices, and the worst of them all… bland Hawaiian t-shirts.

It’s great then that this is a superb throwback to 3D action platformers of old, specifically those with a duo of heroes taking on the world, such as Jak and Daxter, Ratchet and Clank, and the like. Hell Pie brings challenging, diverse, and mostly fun gameplay, with countless crude jokes to spice up this twisted journey. 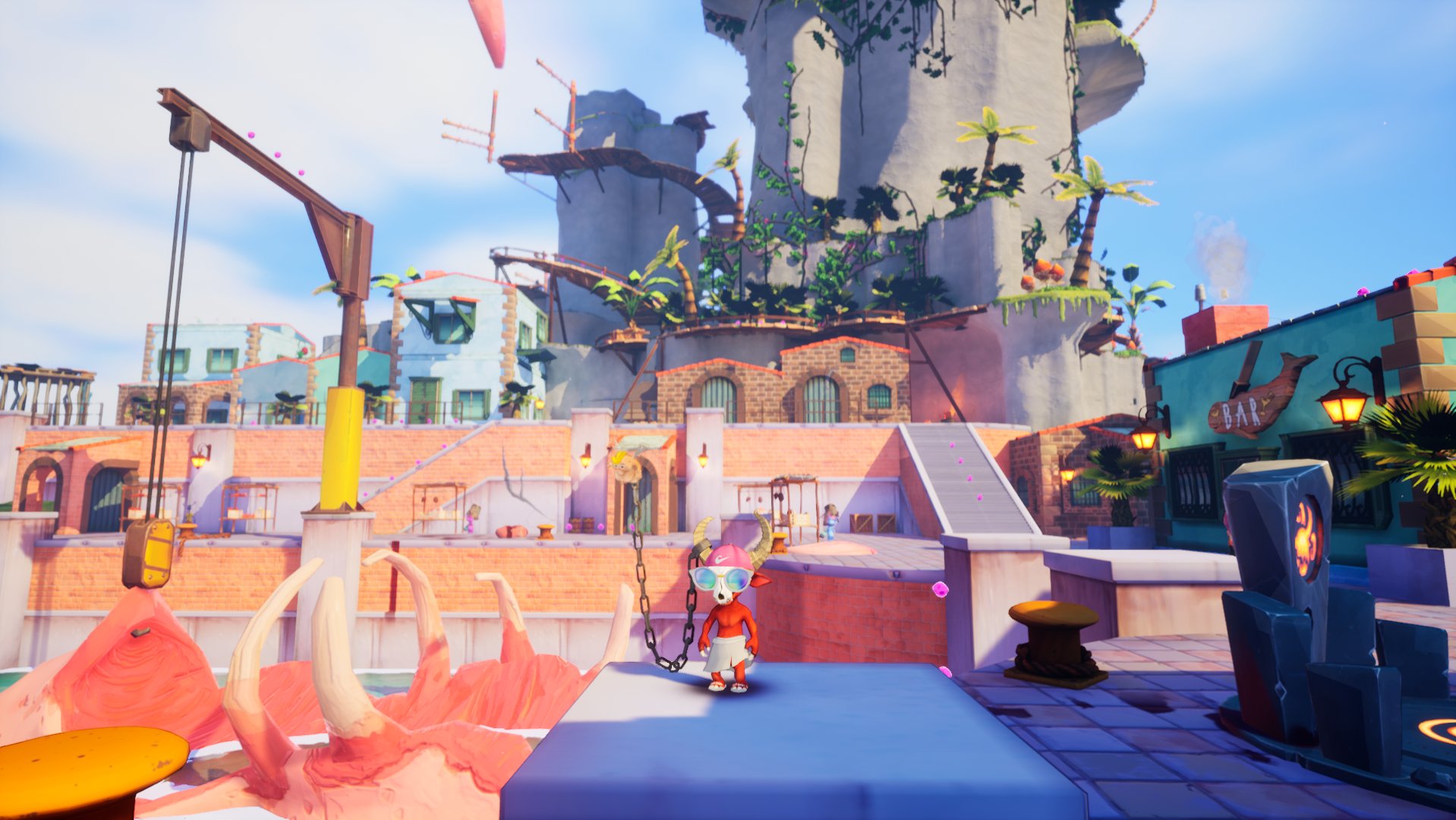 Nate, the ‘Demon of Bad Taste’ and main character of this adventure is sitting on his desk when he gets a phone call from none other than Satan himself. Quickly realizing that he wasn’t talking with the Chef, Satan does what every tyrannical leader would do – order Nate to carry out the assignment of getting ingredients for the pie, no matter what. Burning in hell may be a very likely event in case of failure, but let’s not get ahead of ourselves.

Hell Pie comes with versatile and easy to use controls, probably its most noteworthy feature. Controlling Nate from the moment that he finds his morbidly obese and repulsive cherub companion Nugget is a true delight. Nugget works both as a chained attack weapon and as an air hook, providing some entertaining and intuitive grappling movement. The way that this mechanic works is ingenious, with potential for free roaming that would make Spider-Man proud. Instead of grappling a fixed point in the environment, the cherub acts as the axis of the grapple, with Nate swinging around it in any desired direction.

While you’re limited to a single swing during your early shenanigans, a skill tree will let you expand on this ability and explore others, such as ground slam and dash damage. You need to search the levels in the most obscure places for meat cans to unlock new skills, but the trouble will be worth it, especially for chaining those additional swings - pun intended.

But Nate has more tricks up his fiery sleeve. A fine selection of horns will give him special powers, such as showing the hotspots in the current world. Other set of horns will endow him with speed that would make his hellish co-workers eat his dust. Nate is a resourceful little devil, that much can be said about him.

The joy and freedom of exploring the various levels of Hell Pie is akin to the all-time greats of the genre, as you perilously make your way from platform to platform, often with nothingness or lava below. Some sections may be tricky to navigate but learning from your mistakes is something that works here, as you discover the best timing and course of action. While there’s a pleasant abundance of checkpoints for those recurring deaths, some of these may have been placed by Satan himself, such is the frustration of repeatedly going through a tricky area.

Pie Out of Hell 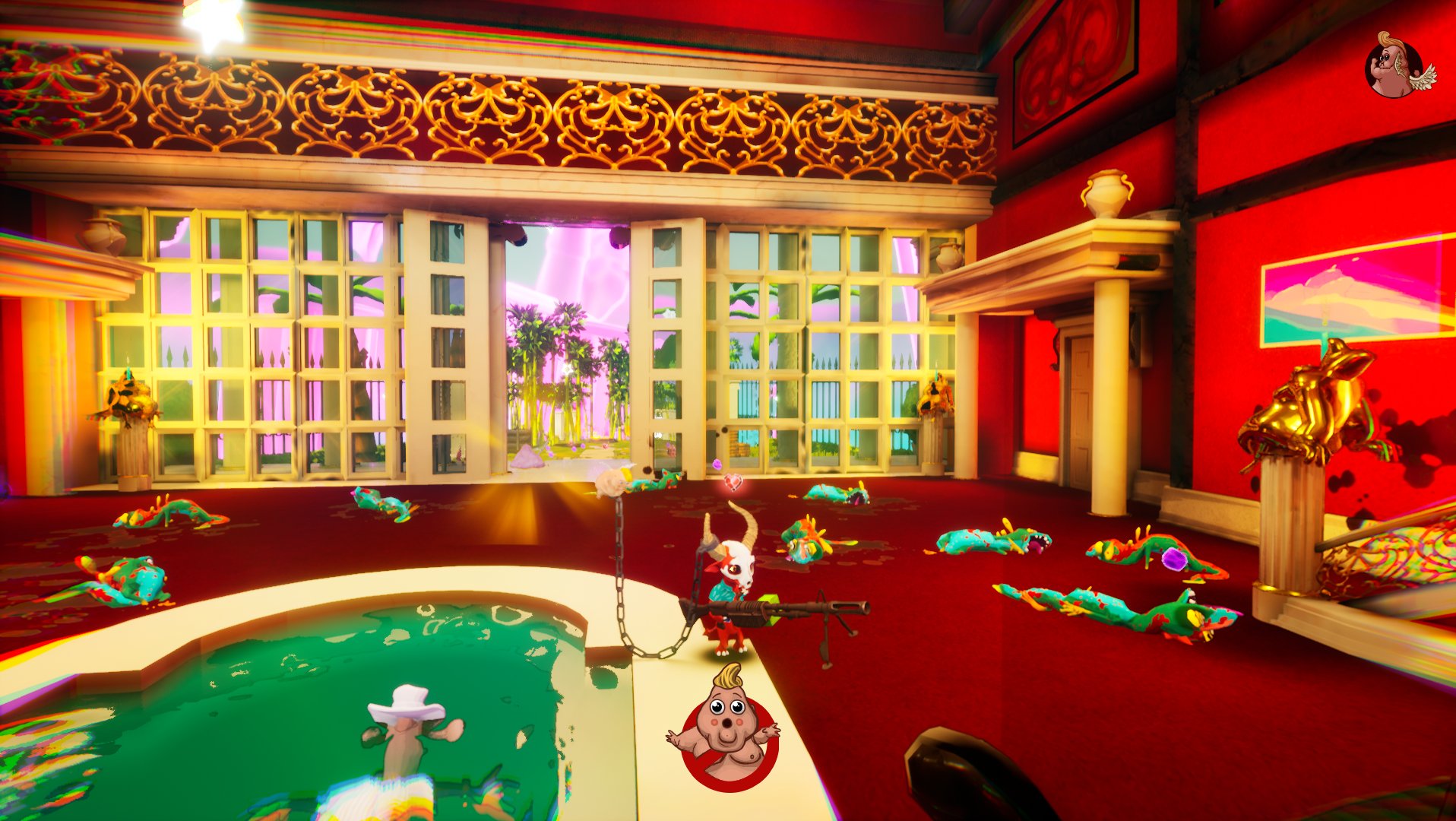 While Hell is the beginning of all crude things, Nate will find himself exploring other hubs in search for the pie ingredients. Sashimi Bay will be your first open world hub, with plenty of collectibles and access to more linear levels where you may get an ingredient from your list. One of the levels is set inside a pink whale turned interior sushi bar… and that is the best way I can describe it. The whale’s innards are much larger than one would expect by seeing it from the outside, and perhaps this is where Hell Pie could restrain itself a bit - some levels tend to drag on for longer than they should, becoming repetitive both in process and look. Even if Hell Pie isn’t the lengthiest game in the world – or in hell, for that matter – with an average of 5-6 hours for your first playthrough, some sections could be trimmed to work better as a whole.

It’s not that Hell Pie is a difficult game, although there are some frustrating moments; it’s just that occasionally you’ll lose track of your goal, pushed by the will to explore and to hit everything and everyone. Several levels have quite a playground feel to them, with many diversions to bring some fun and destruction. You have a myriad of silly interaction possibilities with vending machines, printers, and other objects, most of them with a reaction that may instill a giggle, a laugh, or a baffled face. It’s a full-on satire with plenty of bad taste, encouraging you to look on the most unsuspecting places for collectibles, or simply to turn the place upside-down, as any devil should do.

In terms of graphics, the wacky levels have a distinctive style to them, and there’s enough variety here in terms of environments. But I must say that several characters, both NPCs and enemies, have a cheaper look to them, sometimes unworthy of standing next to Nate’s substantial detail. If you look up close, you may find that this is an area where the game could look frankly better, but still, in a broad sense, Hell Pie is very pleasant.

The soundtrack is an eclectic mix of styles, starting with the sound of smooth jazz in the devil’s office space – as anyone should know by now, smooth jazz is the music of the devil. But you’ll also find other locations with the speakers booming out heavy metal, or places with a more relaxed funk sound. It’s diverse for sure, and another quality aspect of Hell Pie.

Hell Pie is a fun, occasionally vulgar, sometimes hit or miss satire of old-school platformers where the most important thing is that the gameplay works. It controls just as it should, with a competent grappling hook mechanic and inventive playgrounds to let your imagination run wild. Your level of enjoyment may vary according to your ability to stomach some crude jokes, but Nate’s journey from hell and back is an interesting one, albeit not quite the stuff of gods. Not that Satan would allow it anyway.

Hell Pie is available on Steam, PlayStation, Xbox, and Switch.