Sometimes you just need to shut down your brain and enjoy some mindless fun. That’s why games such as Goat Simulator 3 exist, to remind you that you don’t have to be the hero all the time; that’s exhausting, and you deserve a break from saving the world or rescuing the foolish princess. Causing utter chaos is known as one of the greatest stress-relief activities in gaming, and who better to do it than a goat with sharp horns and an even sharper disregard for serenity? 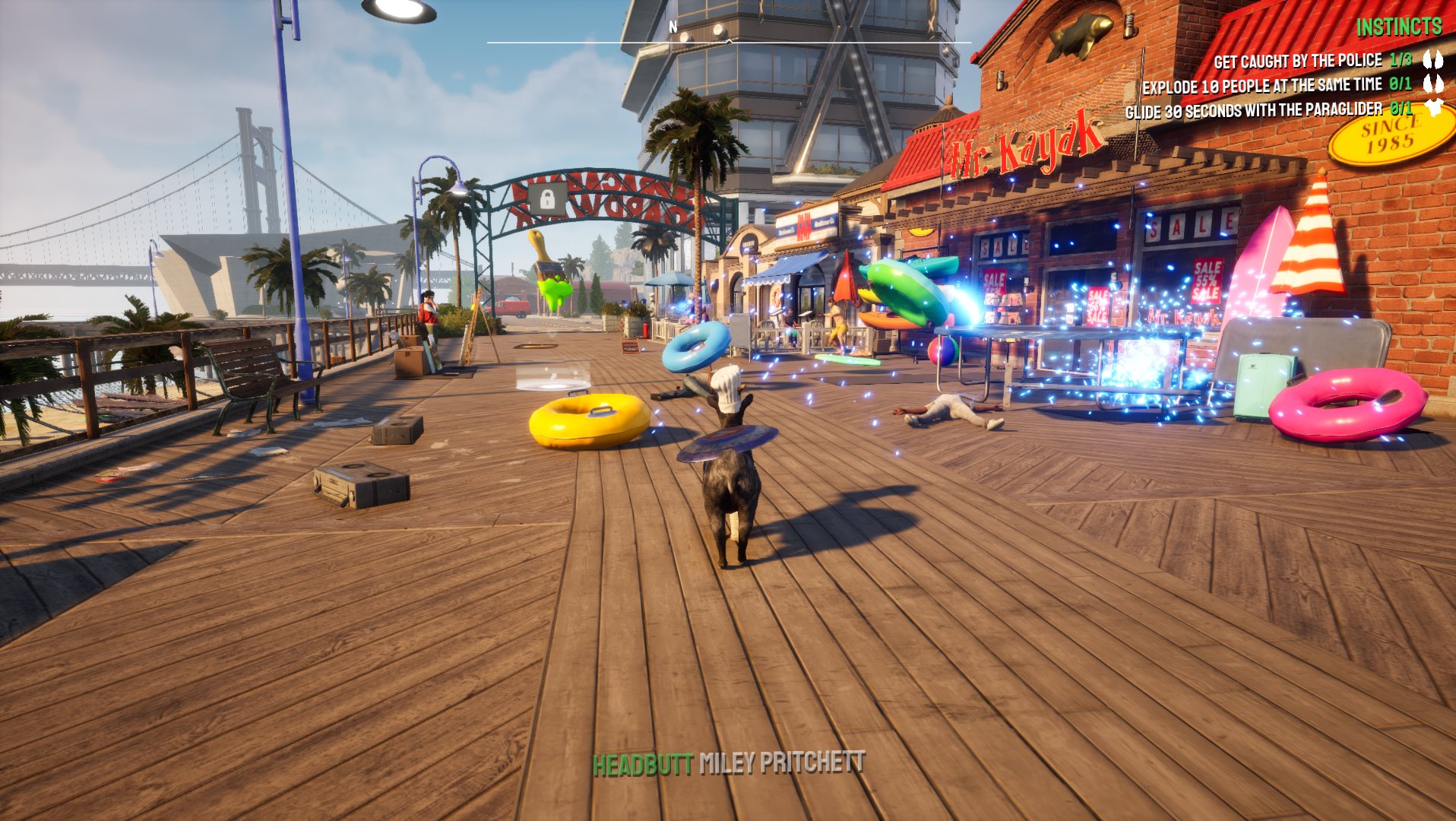 Goat Simulator 3 is the sequel to Coffee Stain’s 2014 hit Goat Simulator, skipping over number two in a joke that some of you may remind from the Leisure Suit Larry series as well – and from Windows releases too, probably the funniest ever unintentional use of this gag. Quickly going from oddity to blockbuster, Goat Simulator finally sparked a much-improved sequel that tries to be the definite gaming destruction sandbox – or at least the definite one starring a goat.

Sporting an open world much bigger than the one seen in the first game, Goat Simulator 3 isn’t as laid back and lacking direction as before. This time, there’s an attempt at a storyline involving towers and expanding a castle, all of it explained during a decidedly lengthy intro, as the farmer character tells you. He also jokes about a Skyrim cart and asks you not to refund the game, in one of several fourth-wall breaking events that will surely put a smile on your face.

The physics-based mayhem is everything but restrained or politically correct. There are no visible boundaries to the amount of chaos that you can wreak in this large playground, as you headbutt everyone and everything, set people and vehicles on fire, zap them, hijack cars to run over police officers, firemen, and all the bystanders, and come up with extremely creative uses of all the gadgets at your disposal. Were it not for the lack of blood, and Goat Simulator could be described as a no-holds-barred mix of GTA and Postal 2, but with more bleating. 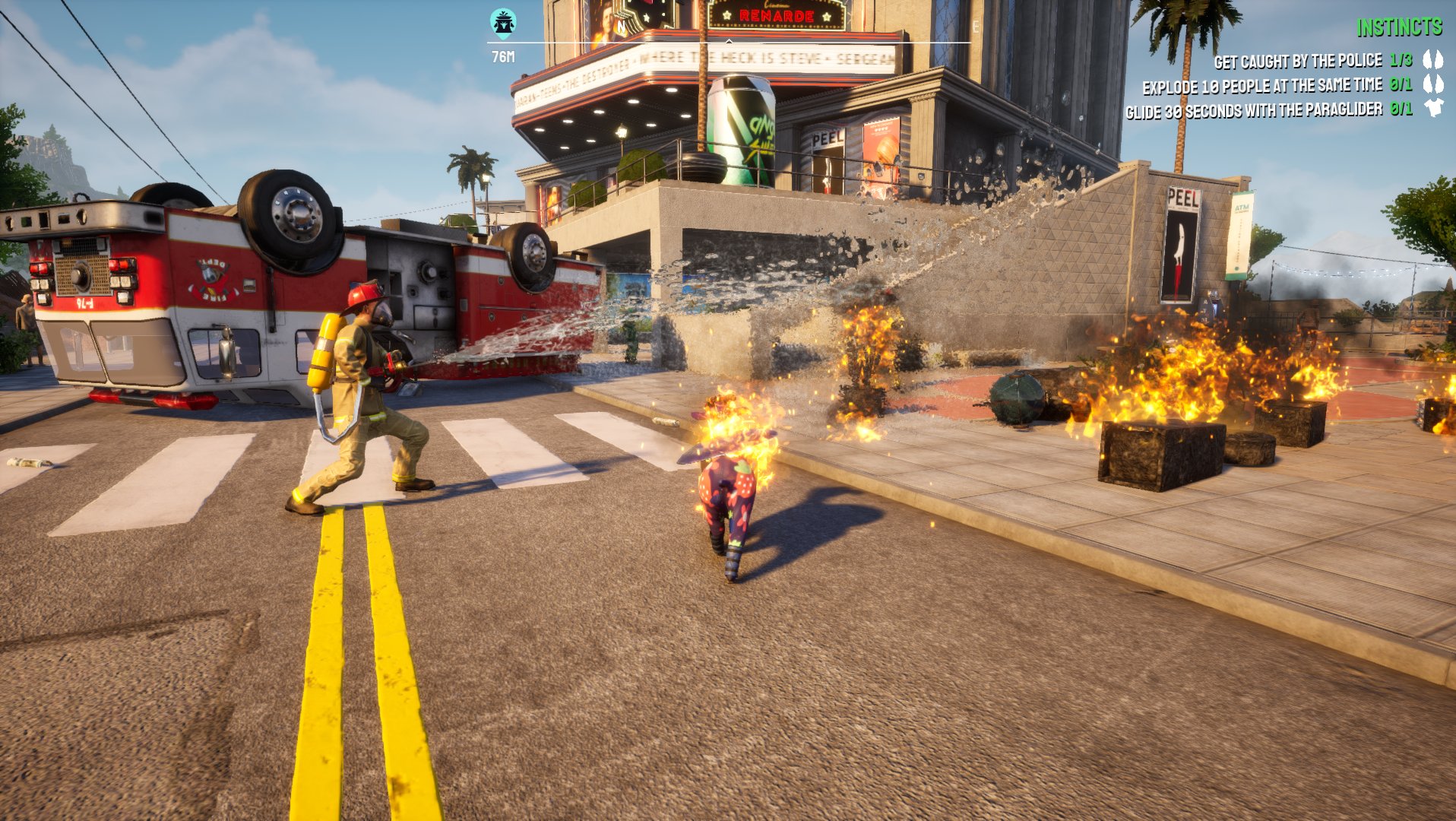 Your goal in this world is to go nuts and experiment with everything in your path. Further places bring new items and potentially fun and dangerous results, but don’t worry, your goat is immortal. You can tar it, burn it, zap it, throw it from a tall building, and nothing breaks but your pride. Activities called Instincts will keep you busy, almost turning your goat into a furrier Tony Hawk and the playground into a skate park as you do front and backflips, 360’s, grind on electrical cables, and whatnot.

But that’s not the gist of it, as Goat Simulator 3 has a host of missions for you to tackle. There are many fun moments, most of them of the wacky kind, with interesting jabs at real-life situations including a farmers talent show with a judge called Simon Cowbell. A certain bird-watching quest may knock you off your chair, and tree-hugging hippies who are impeding the trees from fully growing are just asking for a headbutt. Pulling a massive ball of chewing gum that some farmers used to contain a crack in a silo will make it all come tumbling down, and sacrificing scarecrows for a satanic ritual ends with you turning into a scarecrow yourself, one of the many customization options in the game.

One mission will take you inside the pixelated world of Wolfenstein 3D, headbutting wool-ball launcher grandmas like there’s no tomorrow. Part homage, part realization of the weirdest dream of a drunken school kid, this is the kind of absurdity that you can expect from Goat Simulator 3.

Completing missions usually rewards you with an offbeat item, including Captain America’s… I mean, Captain Yankee’s very own shield that you can use as a marvelous weapon, rebounding everywhere and causing more explosions than you can handle, while an ancient television set makes the screen go old, complete with severe static. The latter is the prize for finding a lost horror tape in a mission, which you can then play at the movies and watch the trailer on the big screen – called Peel, this could be a great idea for an actual cheesy horror movie, following a woman who is suddenly tormented by a banana peel monster.

Goat Simulator 3 is a mishmash of genres and utterly insane quests where anything goes, and it’s impossible not to have fun with the randomness in display – the arbitrary nature of some vehicle pileups where too much is happening at the same time is an absolute triumph, sometimes without your interference. 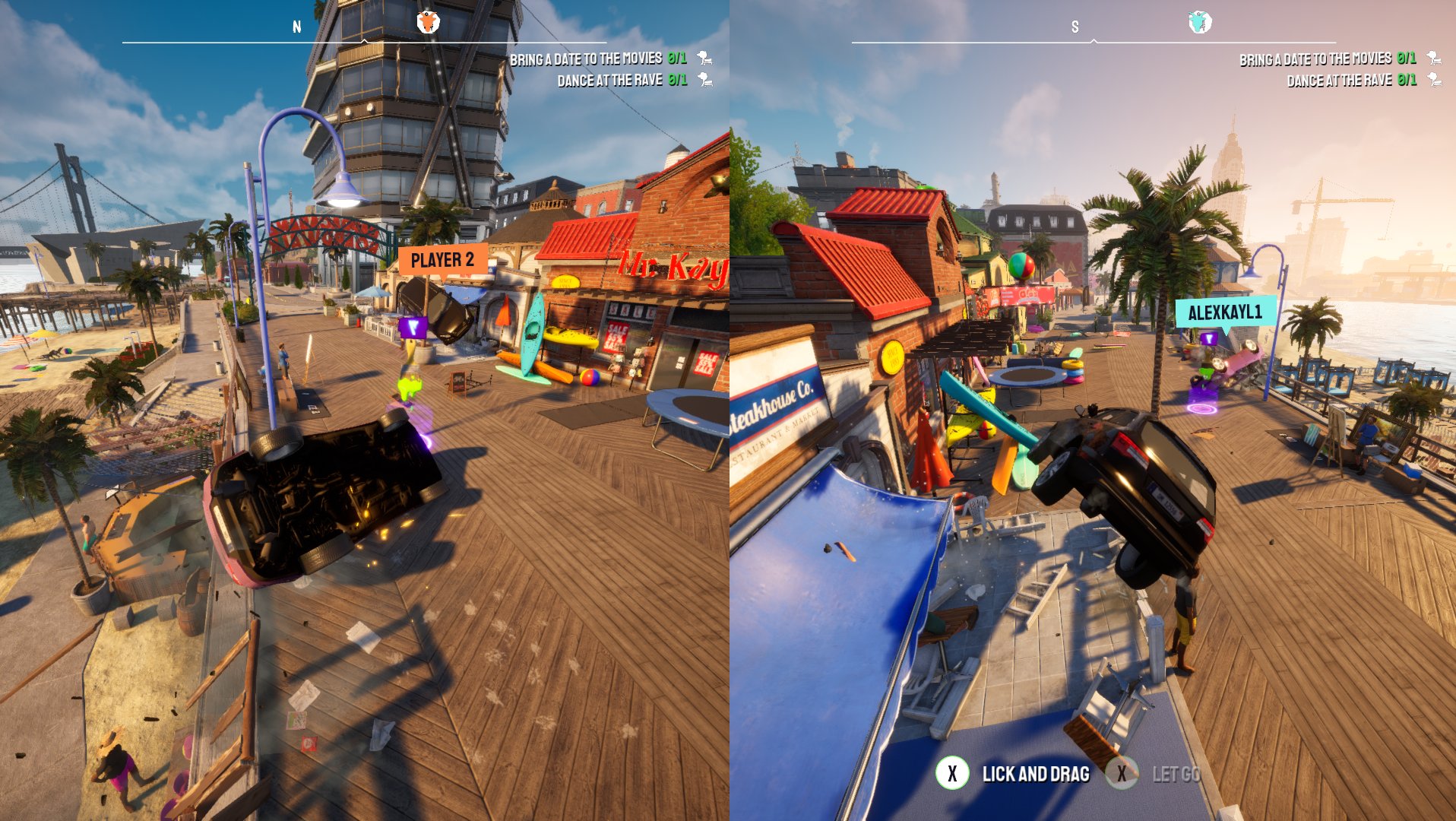 Goat Simulator 3 comes with a substantial dose of weird unlockables to customize your goat, but that’s only half of it. Most gadgets add some strange power into the mix, including anti-gravity helmets to lift everyone up in the air, a paraglider to soar the skies, a leaf blower to blow the dirt away, and a fireworks launcher to throw people into the skies and watch them explode into beautiful colors. The results are diverse and it’s normal if you feel tempted to try most of these options.

You’re not limited to living the life of a goat either; you can unlock and control other animals from pigs to giraffes and even sharks, somewhat twisting the original concept and making room for even more fun and glaring issues. Goat Simulator 3 is hilariously bugged, with countless clipping issues and visual errors like the goat sticking its head through the car, grass growing inside a house, objects randomly flicking and spinning as if possessed, and so on. Let’s not forget to mention the creepy way that the huge giraffe gets “inside” of a car and drives off, ignoring the fact that the rooftop is cutting it in half.

The option to bring three friends into local or online multiplayer adds to the mayhem. While you certainly tried to complete some missions and Instincts during your solo play, having a friend around is a surefire way to turn this into a mindless battle of stupidity. A middle ground between cooperative and competitive play, you will be laughing as you take turns hitting each other, exploding one another’s vehicle, and causing the greatest uproar possible in a small area. This game is the equivalent of a brainless comedy movie, a completely puerile playground that makes for some amazing game nights with friends who just want to disconnect from the real world and mess around. 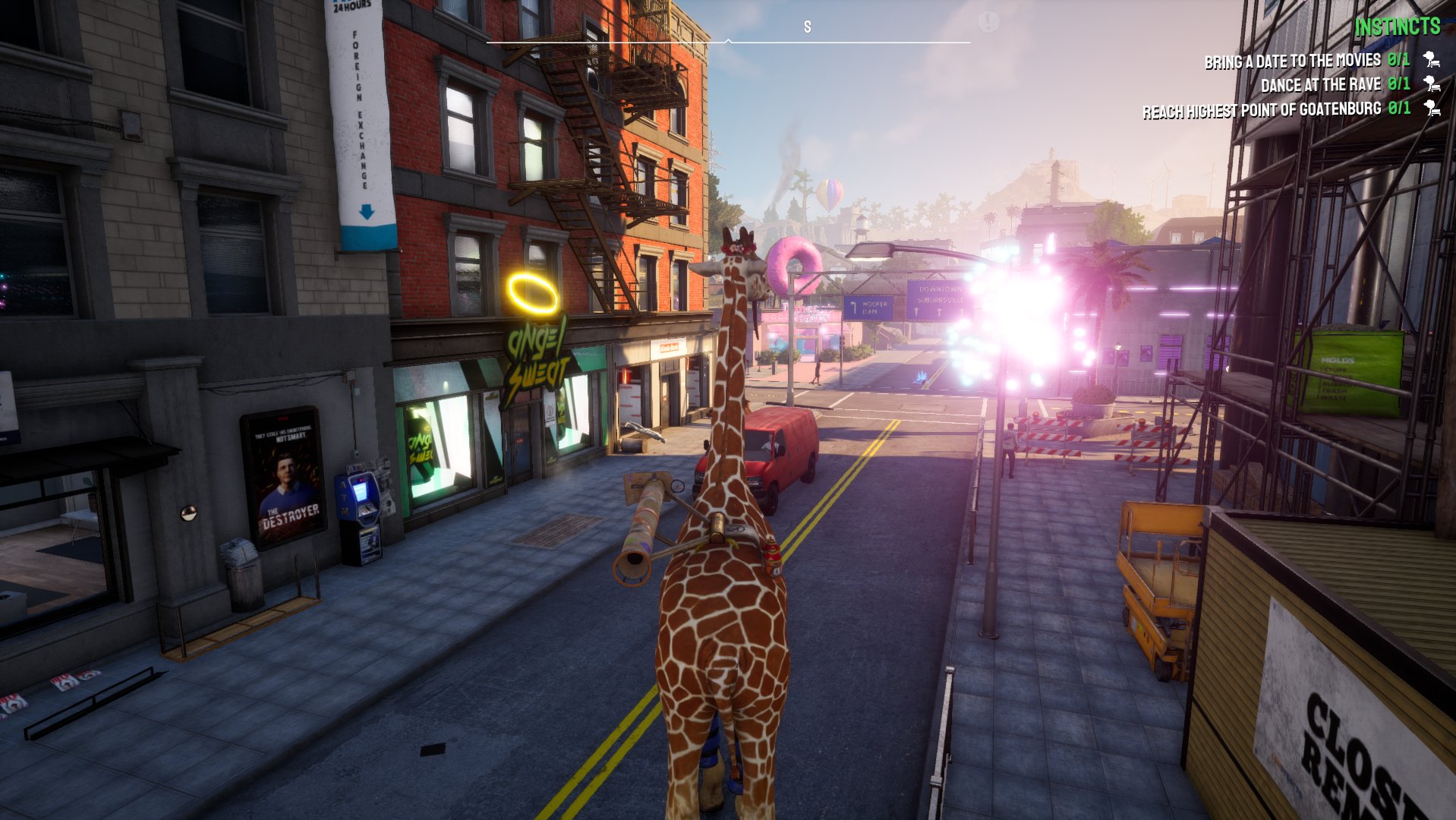 Immature to the bone and oddly violent to a fault, Goat Simulator 3 is a guilty pleasure. With no villains to chase and no princesses to save, you can just take comfort on the idea that this massive playground was created for you to tear it down, break it, burn it, and try all the outlandish ideas that cross your mind, no matter how immoral they may sound.

Just knock yourselves out – after all, this is a game where you impersonate a goat doing missions and driving vehicles, so there’s nothing serious about it, only mindless, disposable entertainment.