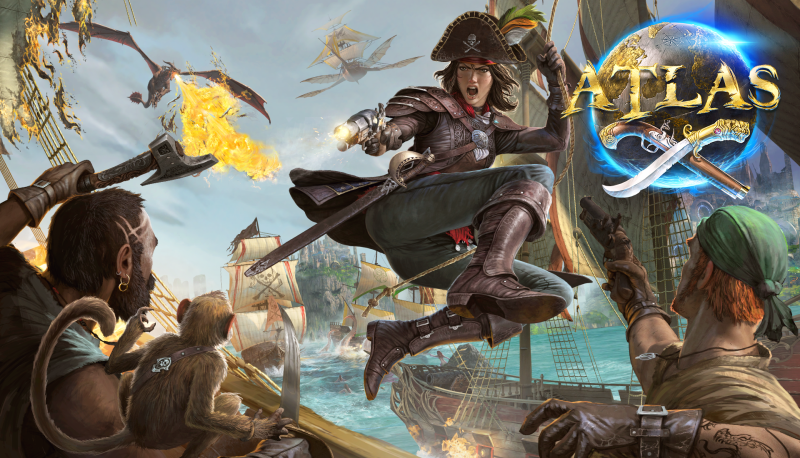 Before reading, please note that this game is still in Early Access state.

From the creators of ARK: Survival Evolved comes ATLAS and just like ARK, ATLAS is an open world MMO survival game that offers a great adventure, the only difference is that ARK is about dinosaurs and ATLAS is about Pirates. Unfortunately if you played ARK before you'll feel more like it's an ARK DLC so for ARK players so I'll do a short review for you which will be a small comparison between ARK and ATLAS and the rest will be a long review for non-ARK players.

For ARK players:
After you login and create a character you spawn naked just like ARK (or any other survival game of course lol) and then you'll be surprised that the trees,the sky,the landscape,the environment even the tools's skins are all the same as ARK, the creatures aren't the same because ARK has Dinosaurs and this one has normal ones like Bears, Giraffes, Lions, Pigs, Elephants etc but in a fantasy theme however you can tame and manage them just the same way as ARK, the building system is the same, the upgradeable stats (stamina, health, weight etc...) are the same, the things your character can wear (Head, Torso, Legs, Hands, Offhand and Feet) are exactly the same, character creation, most of the craftables are the same as well and much more... that's why this game will feel very familiar for you. The only difference is you can build ships and few more things I'll talk about in "For non-ARK players". 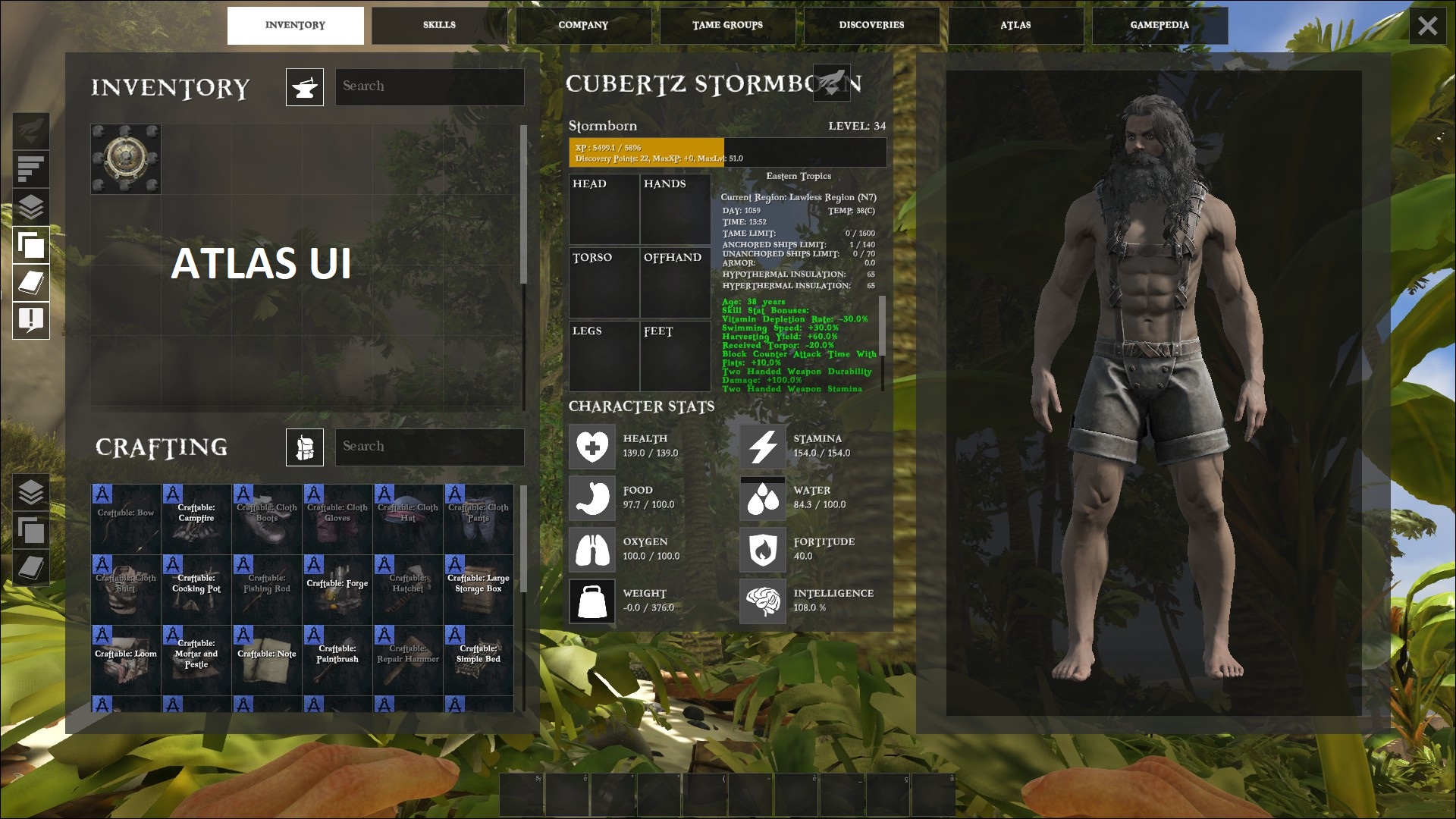 Both the UIs are the same as you can see. 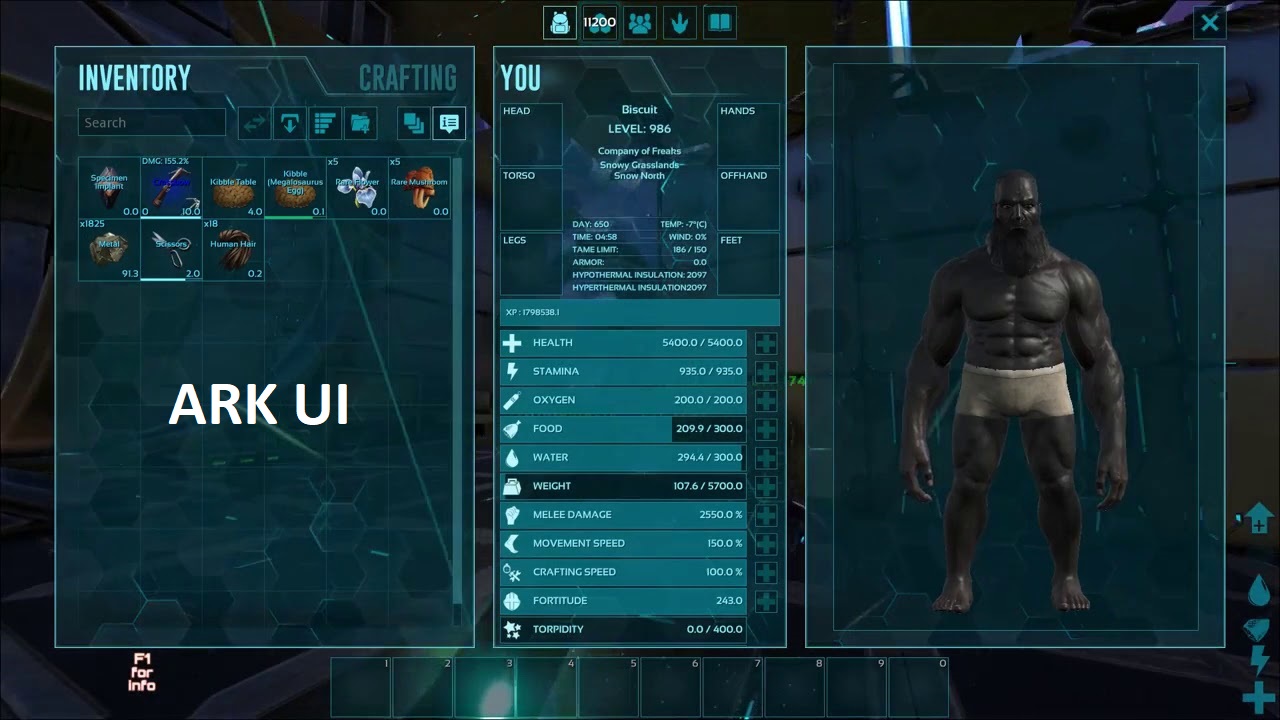 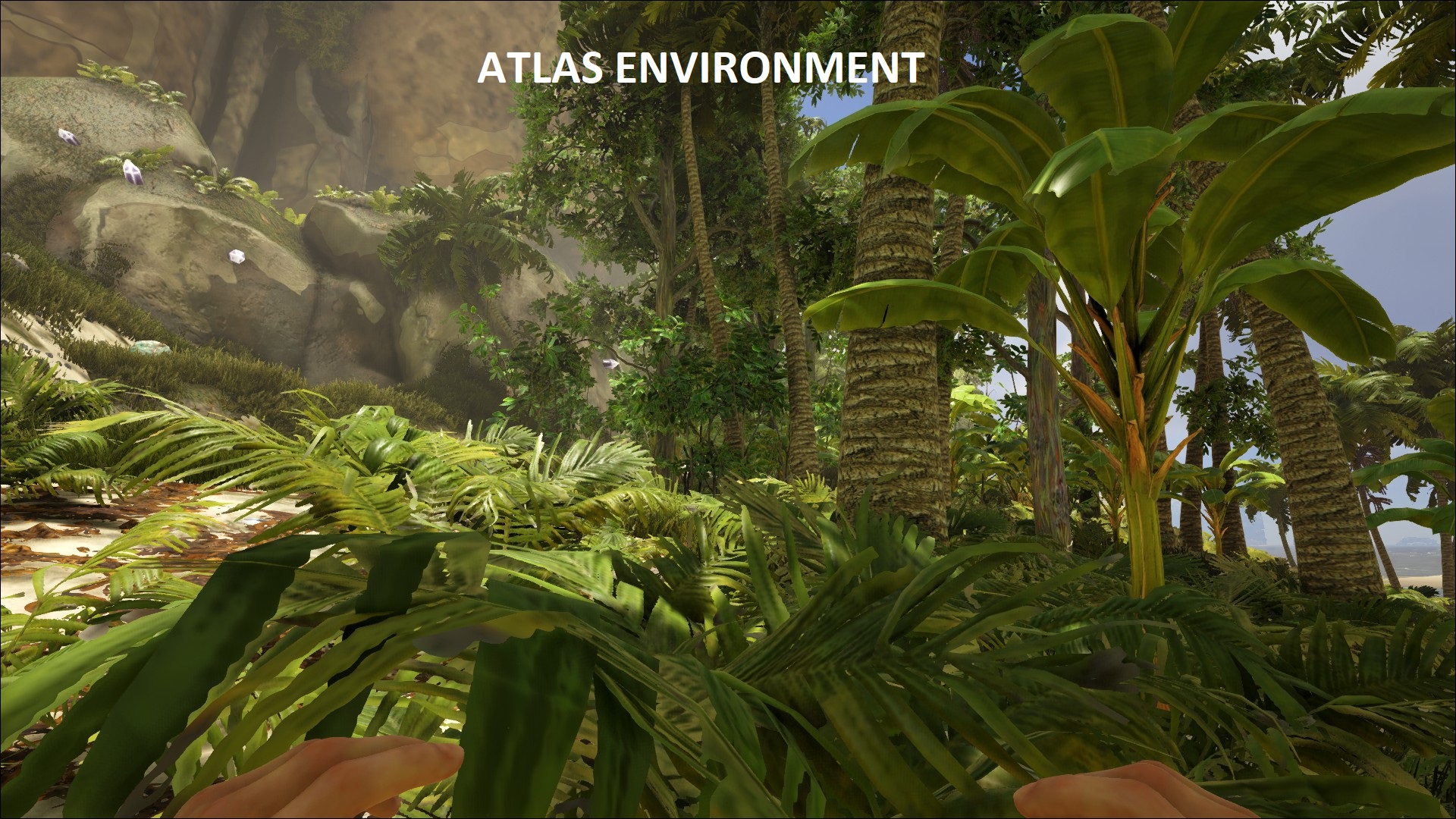 The climate, bushes and trees are very similar and there's much more. 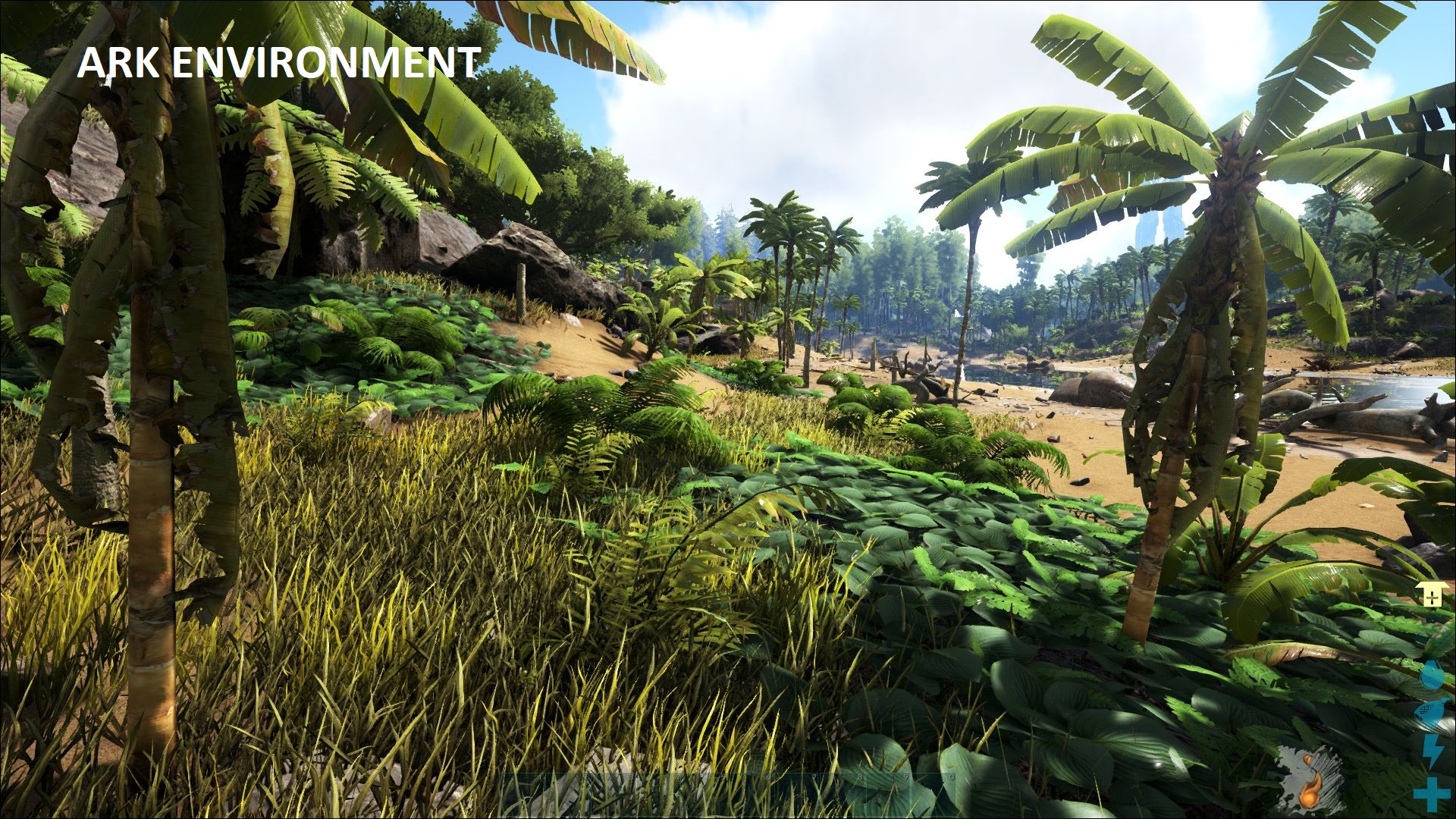 Those are just some examples, I'm sure when you try the game the first thing you're going to say is "this is definitely an ARK DLC"
For non-ARK players:
You choose a server (There are 4 official servers, 2 for NA and 2 for Eu, 1 is PvP and the other is PvE, as a new player I don't recommend you to choose PvP first because you'll probably rage quit, and then there are tons of unofficial servers that are made by other players), anyway, you spawn naked in a Freeport Island (a freeport island is where new players spawn) without any clue just surrounded by a vast ocean and a variety of wild creatures and here your adventure begins, you'll get a mini tutorial that'll guide you a little however everything will be up to you now, the first thing you need to do is grind resources to get your first ship and honestly that's what you'll be doing the whole game, grinding. There's a shipyard that'll build you a ship if you get him the necessary resources (wood, hide etc) so you can either do that or just starve to death. Once you do that you'll have to set sail and find a Lawless island where you can build and grind and much more and here your real adventure begins. 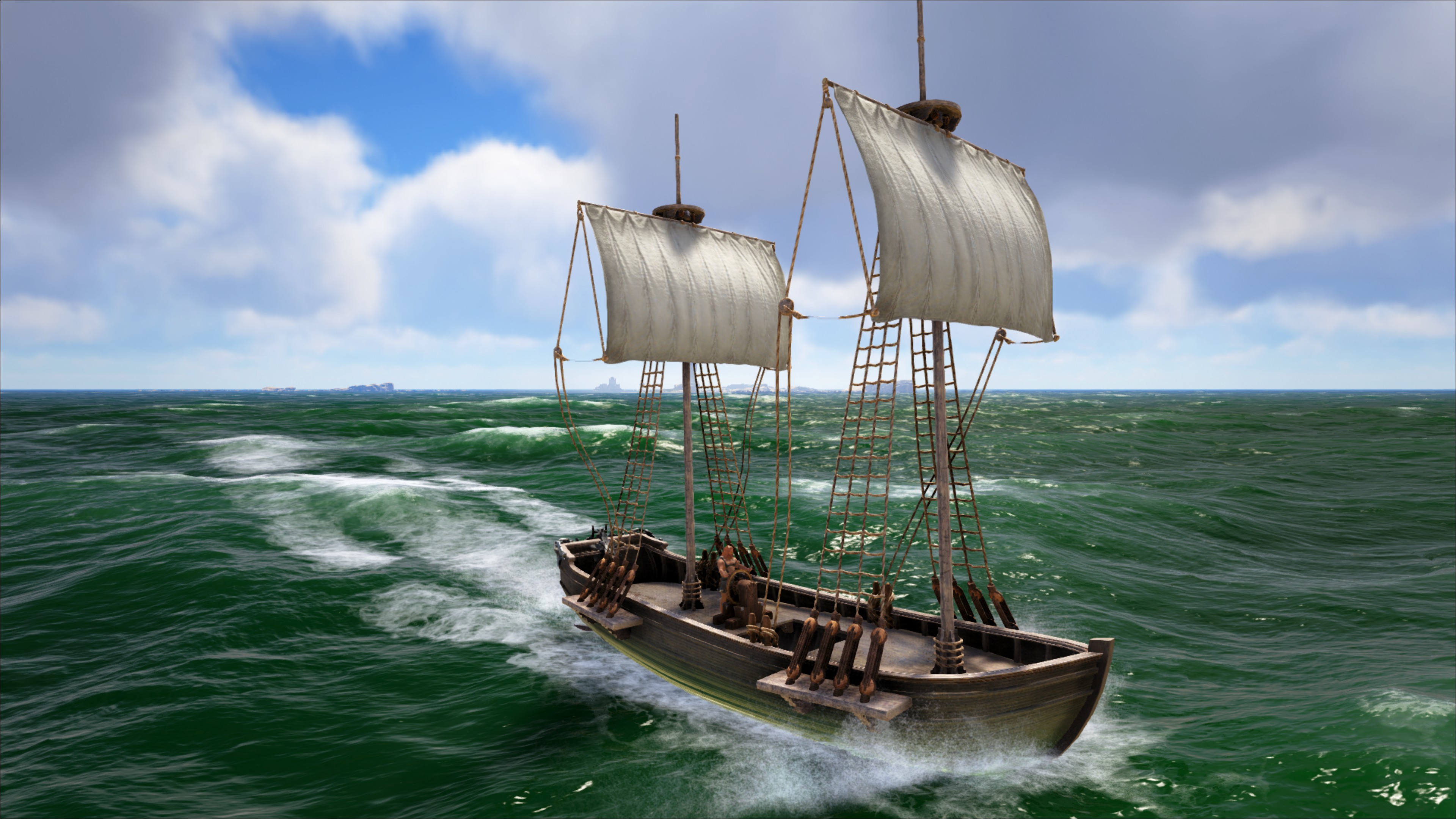 Once you've reached a Lawless Island you'll be free to do whatever you like, craft, build, level up, unlock recipes, travel from one island to another and discover its secrets, build ships, tame wild animals, do treasure hunting and much more.

Map & Travelling: Oh boy this game is massive, once you choose a server you'll be asked to select a region in the map to spawn in, there are literally 225 regions and each region has like 4 islands at least, to travel from and island to the neighbor one it took like 10 to 15 minutes for me and it could be worse if the wind is coming from the opposite direction, so there's basically over 900 island(I guess) if we do the maths that'll take ages to explore them all however for each island you visit you can place a bed that'll allow you to fast travel to it again, unfortunately you'll lose your stuff if you use this feature. 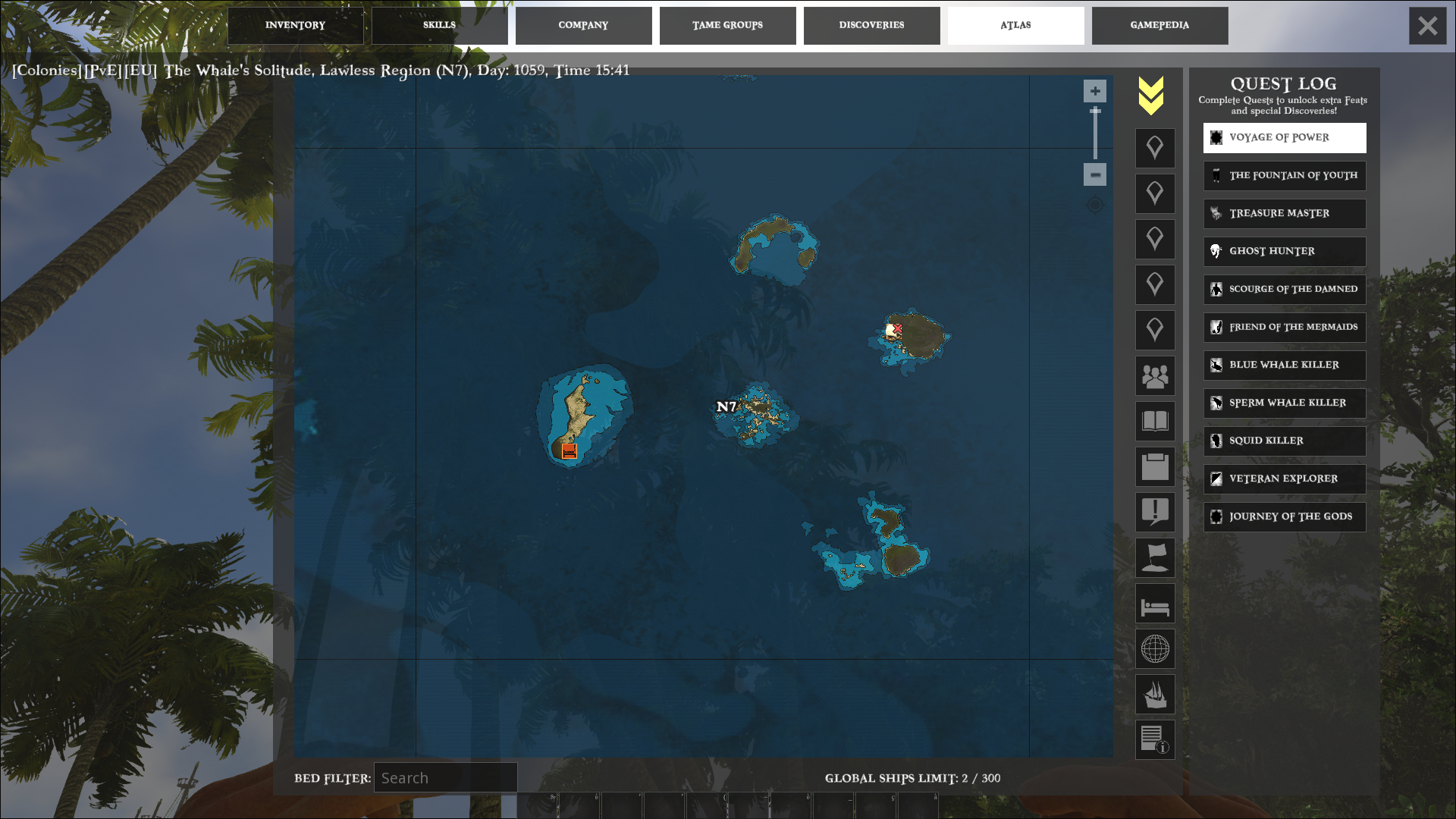 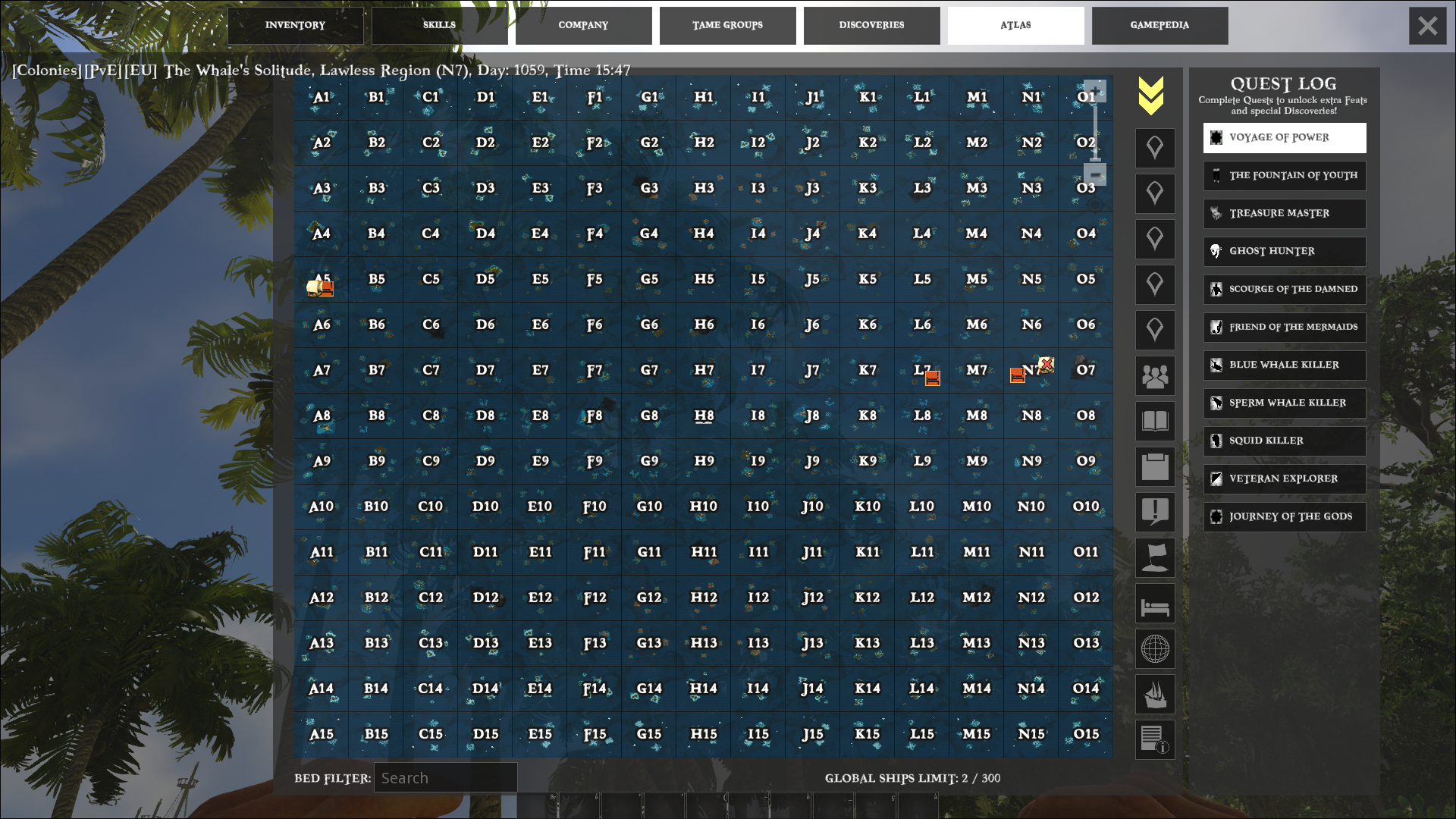 Leveling & Skills System: Leveling is the easiest thing in this game, just keep grinding, crafting and exploring and you'll get massive amounts of exp, even your ship can be leveled and upgraded, just keep sailing. For each level you get you gain skills points to spend on the skill tree and stats points to upgrade your character however, unlike ARK the skills system is totally different in ATLAS and that's one of the big changes. In ARK if you want to build a thatch wall you spend 1 point on the thatch wall recipe to unlock it but in ATLAS it's an MMO style skill tree, you spend 1 point on a skill called Basics of Building and you'll unlock all of the thatch structures and every time you unlock a skill a new one will be available to unlock which is very fun. There's 15 skill tree not just one that'll be very fun to manage depending on your needs which are Survivalism, Construction & Mercantilism, Beastmastery, Hand to Hand Combat, Melee Weaponry, Archery & Throwing Weapons, Firearms, Armory, Medicine, Artillery, Seamanship, Captaineering, Cooking & Farming, Music & Dance and Piracy. 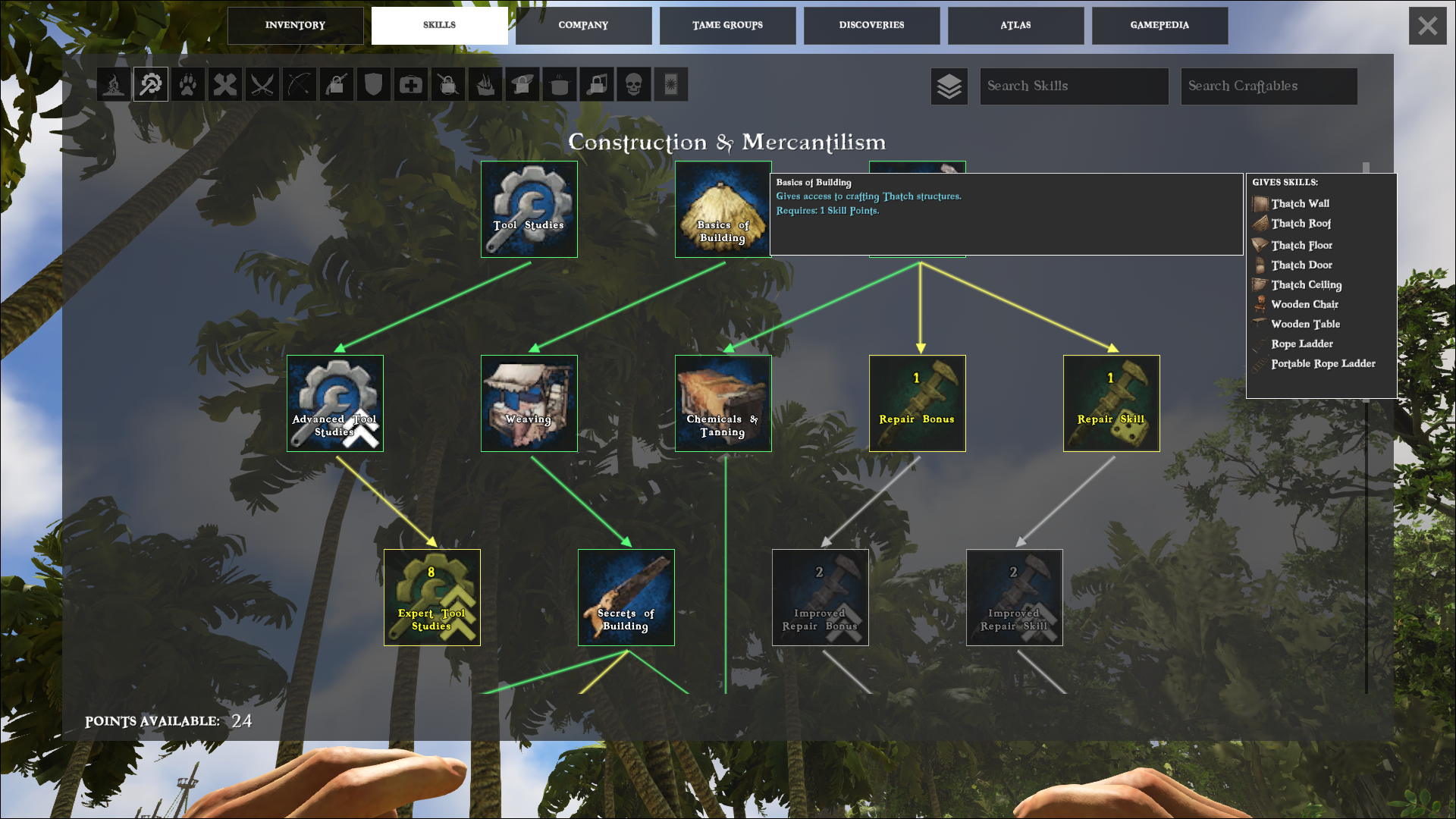 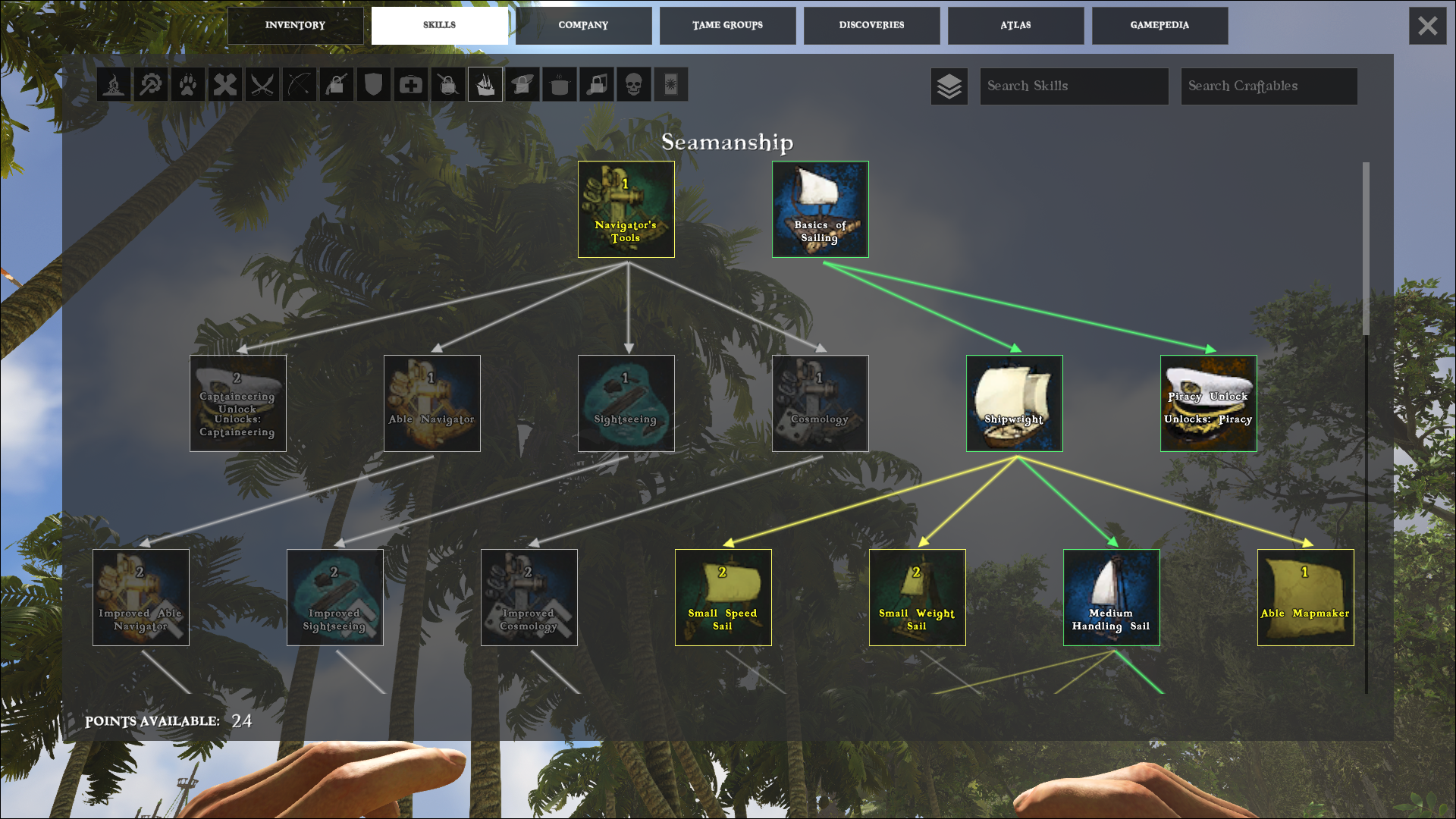 Crafting & Building: The crafting system is so basic because most of the Craftables require raw materials players collect from the world around them which are Wood, Stone, Thatch, Hide, Fibers, Flint, Keratinoid, Metal, Oil, Salt, Sap, Coal, Coral, Crystal, Gem and Mythos. To be honest I'm kinda disappointed because all of these stuff are so easy to get except for Mythos which is used to craft Mythical items. It gets boring very quick because you keep grinding the same materials over and over which are used to craft almost everything and you can find most of these resources even in the starting island (Freeport island). About Building, I really like the building system, It's like ARK but I feel it's a little bit better. you can design buildings as you please without a limit which is cool, except if another player comes around and build close to you, trust me you won't be happy with that. You can use Thatch, Wood and Stone only and you need to unlock the recipes for each type of structures. 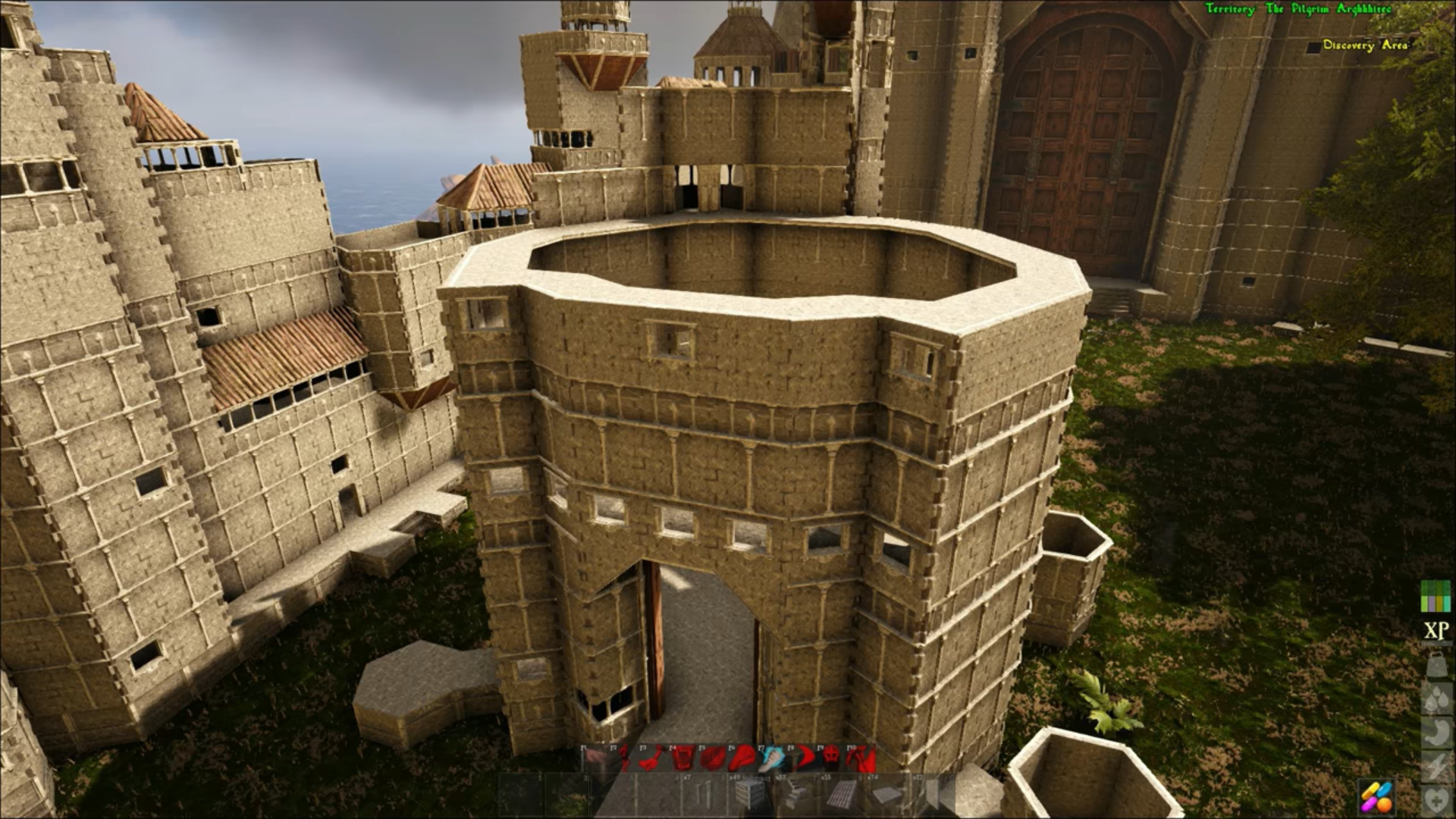 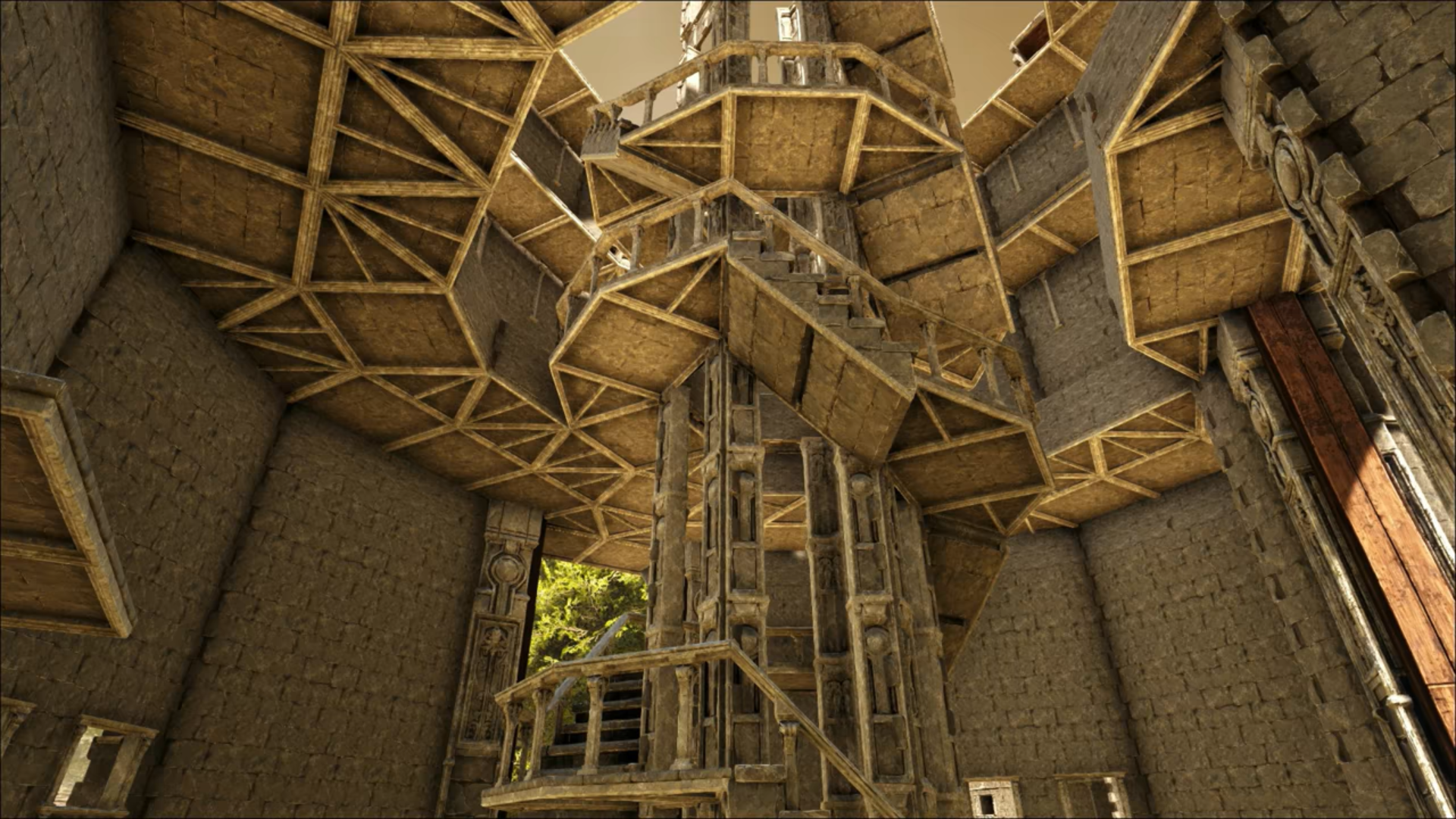 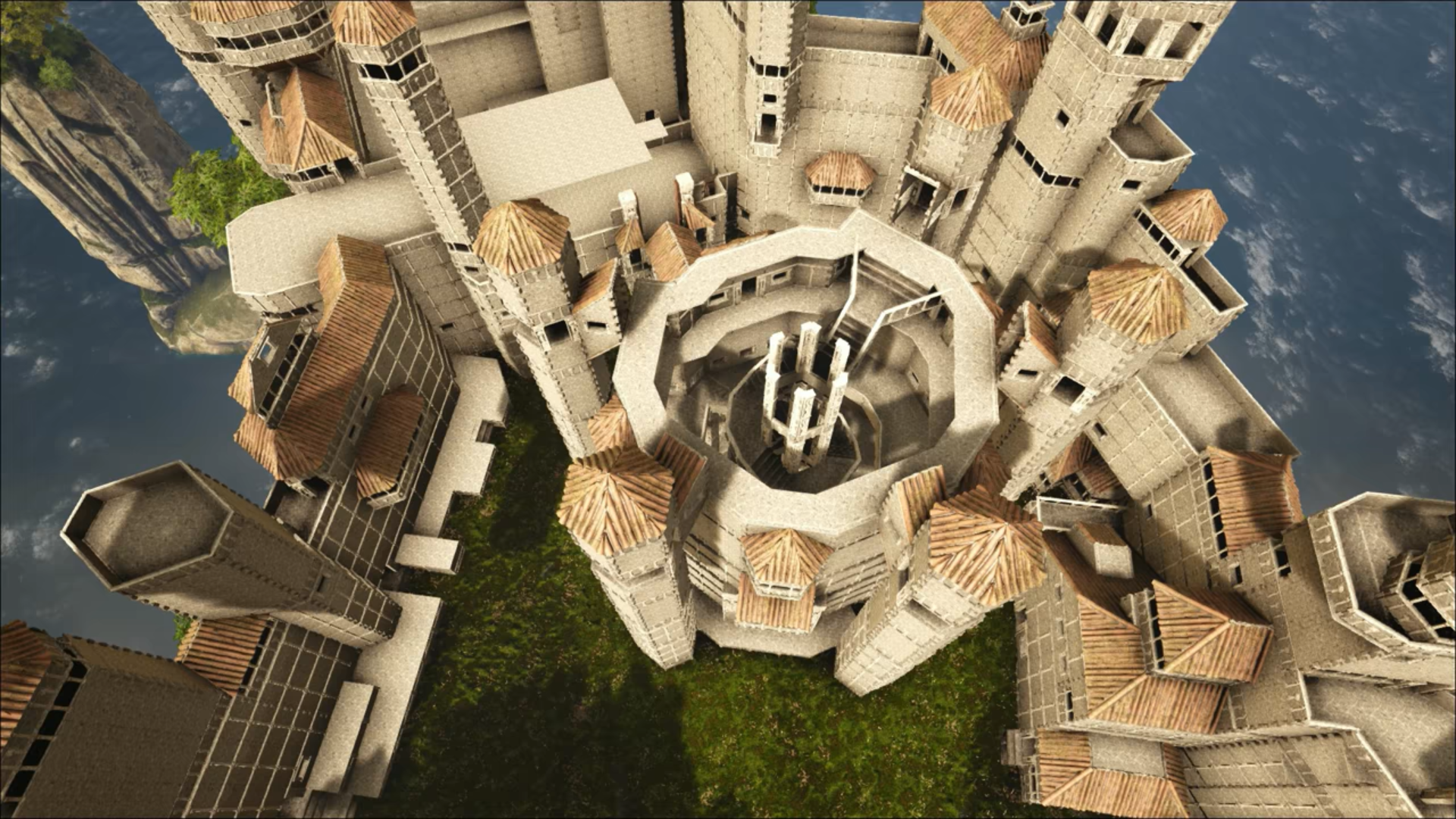 Ships: Ships are the core of ATLAS. You will need to create a shipyard to construct a ship, and you unlock the ability to do this via the Seamanship skills tree.This I guess is my favorite part of the game because, it's "Constructing" a ship not "Crafting" one, you don't just get huge amounts of resources and boom your ship is ready, instead you have to build it plank by plank, every single plank is crafted independently and then you assemble everything together in the shipyard, the planks the sails the steering wheel the deck etc, and then you can dye it as you please. It's probably the most fun thing that is worth the time grinding for. If you play solo, it'll be very difficult to sail the ship because you can't steer and control the sails at the same time that's why you'll have to hire crew members (NPCs) or just play with friends, that's more easy and fun.

Weapons and Combat: There is Fist fighting, Melee fighting, Ranged & Gun fighting, Ship vs Ship and Ship vs Land. The Fist fighting is not really a thing to be honest because I've never seen a player vs player doing fist fighting except for player vs tree lol. Melee fighting is my favorite, you can use either swords or spears however you need to unlock Melee Weaponry skill tree to be able to craft swords, both Fist fighting and Melee fighting have 2 normal swing attacks, a thrust attack, a power attack and block. As for ranged weapons, there's a bow, a pistol that can be dual wielded, a carbine rifle for long range shooting and a unique weapon called Bulderbuss which is a pirate version of a shotgun, just like any ranged weapon you just aim and shoot lol, there are also throwing knives however they are rarely used.
Now for the ship battles which are the best, there could be Ship vs Ship which exists in both PvP (player vs player) and PvE (player vs hostile NPC ships/monsters) and there's ship vs land which is basically a player or a company attacking someone's base with ships because it's very efficient, there are Cannons, Catapults, Mortars, Swivel guns, Bastillas (used to hunt whales), Puckles and Explosive Barrels all of these are ships artillery used in serious combats (they can be placed and used in ranged land combats too) however the best and most fun part in ship combats is boarding other ships, just like real pirates. 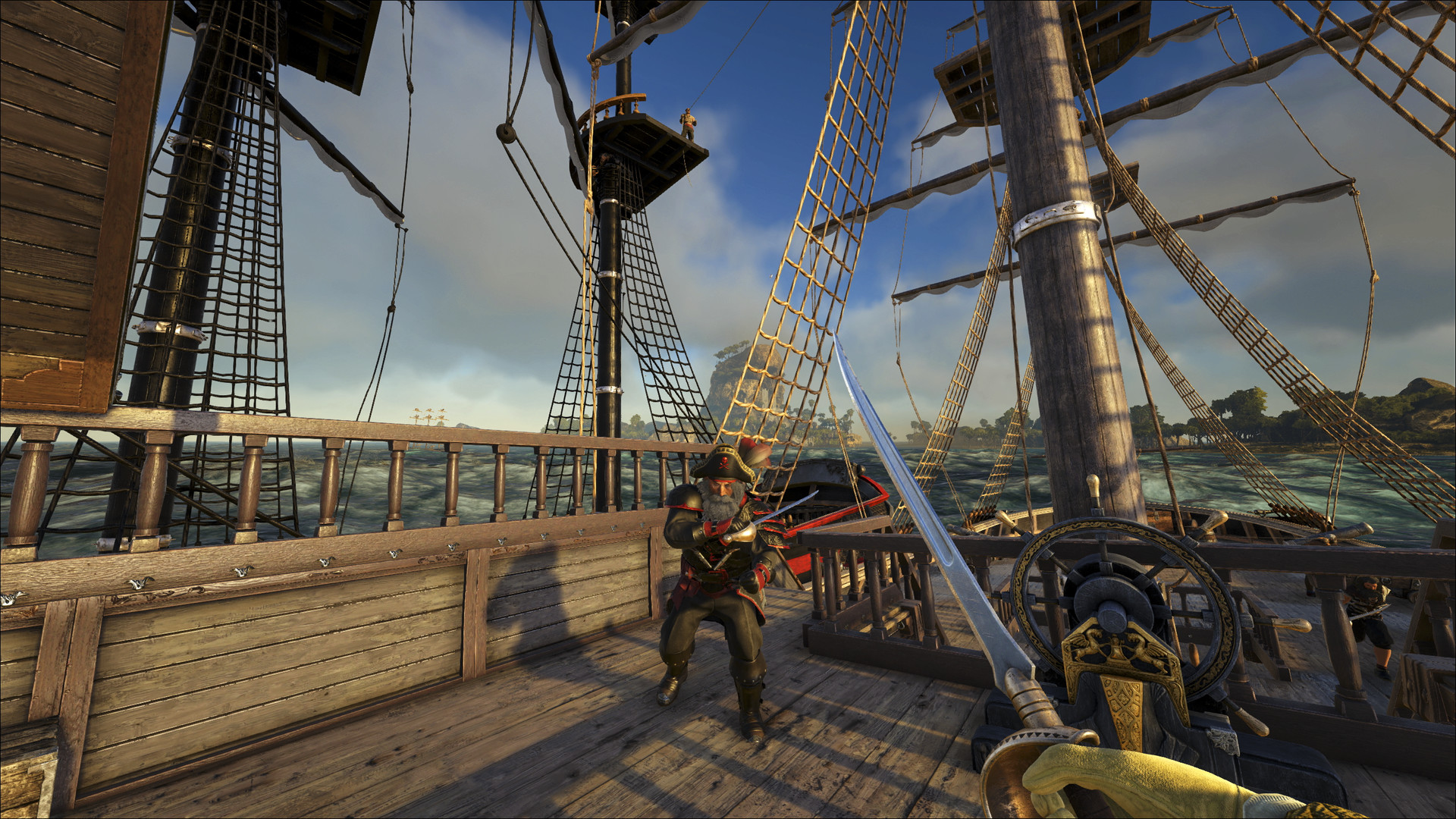 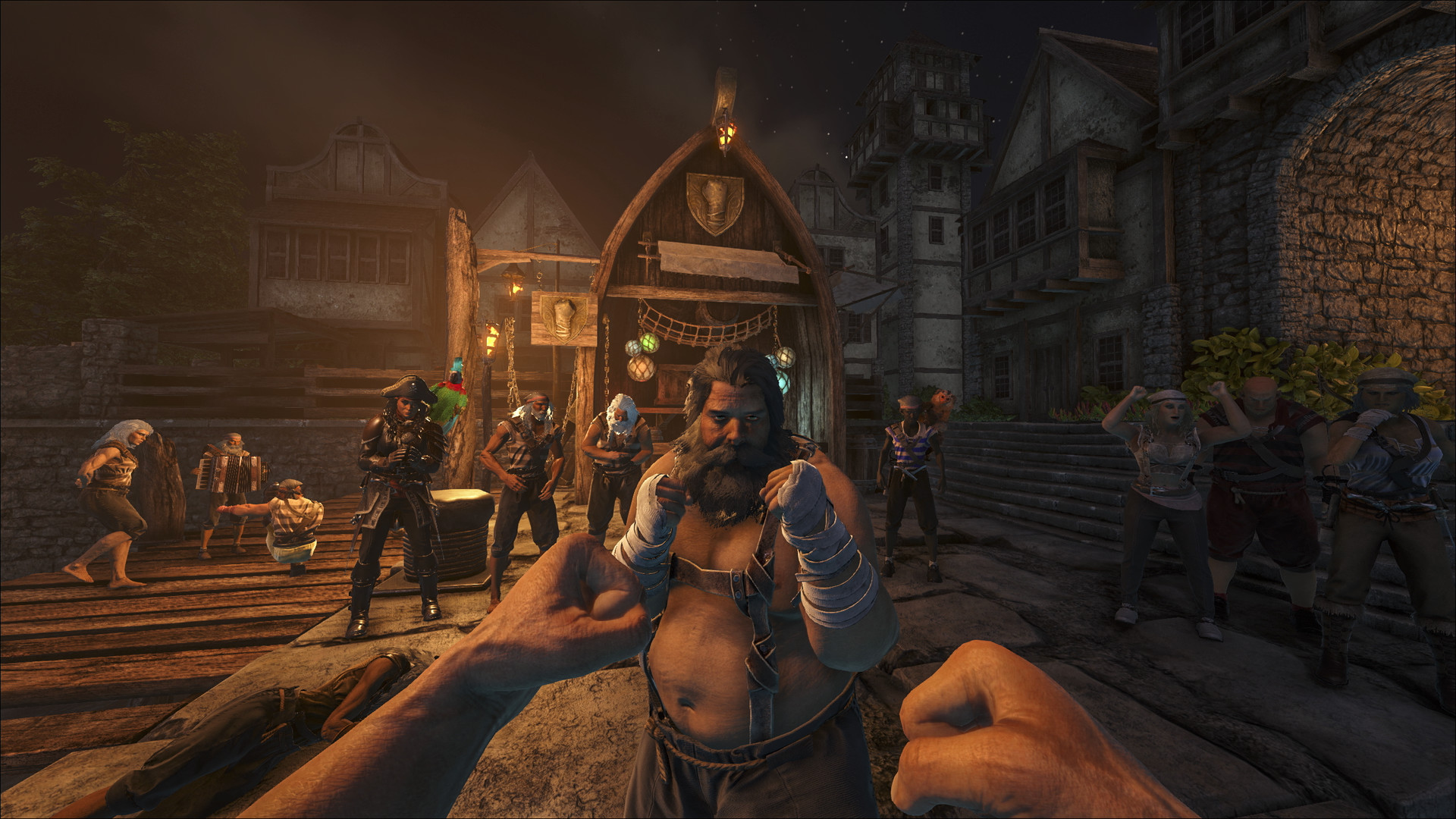 Taming: Taming is one of the major and most useful things in ATLAS but personally I don't think that it suits a pirates game, it just feels weird for me. Most of the creatures in ATLAS are tamable and to tame you need to unlock the Beastmastery skill tree. The animal must be damaged to below 20%, then you can use a "Bola" which is a crafted tool used to knock down the animal then you feed the animal the required food, unlike ARK where you can give the animal narcotics and food then go afk, here you have to stay close and knock down the animal again each time he wakes up until the tame meter is full (animal abuse ;)). Tamed animals can be useful in many things including farming and combat, they can be leveled and upgraded too.

NPCs: There are Mammals, Birds, Fish, Invertebrates, Reptiles, Ships, Monsters and Humans. All of these creatures except humans are Fantasy Themed especially the Monsters, they are not just fantasy themed monsters, they are some legendary monsters we read about in books and stories, there's Yeti, Gorgon, Hydra, Mermaid, the almighty Kraken etc...

Discoveries: Discoveries are special areas found around the world of ATLAS. Every island you visit counts as 1 discovery, but often other areas can be found on islands as well, you get 1 discovery point for each discovery you make. Discovery points will get you extra levels after you reach max level.
Conclusion:
Do I recommend this game?
I've seen so much hate for this game but Yes, I do recommend this game honestly, because even with the massive amounts of glitches and bugs we should give it a chance, the game seems promising and I'm sure it'll be one of the best MMO games in the future, my current rating is 5/10 mainly because of the bugs and glitches however it'll increase in the future. Here's a small tip, if you are the type of player that gets mad very quick and is impatient I 1000% do not recommend this game for you just for your safety not to get brain damage ;).
Pros:
Cons: