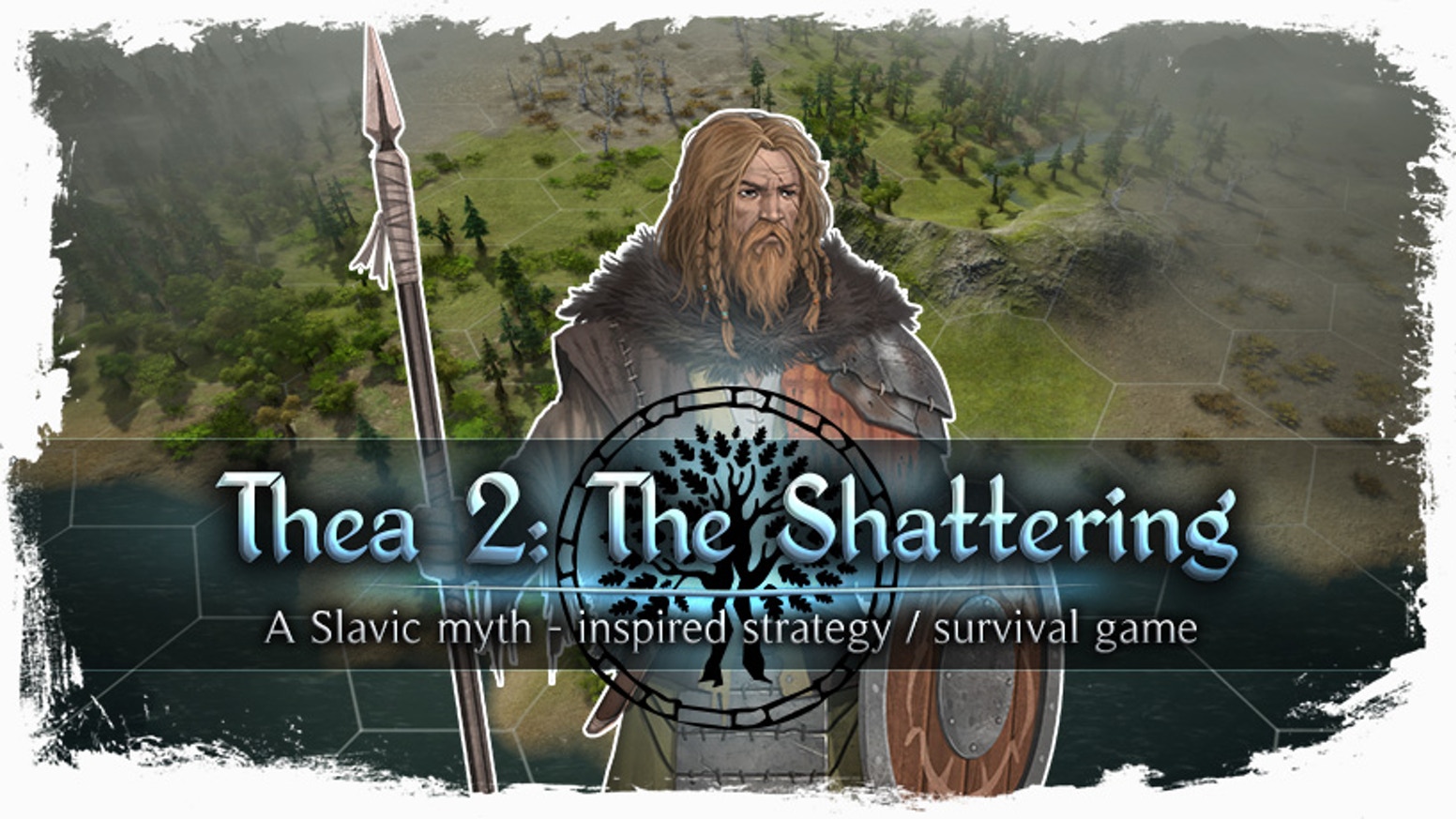 Thea 2: The Shattering is a sequel to the 4X strategy with RPG and card game elements developed by MuHa Games. Thea 2 takes us to the same fantasy land as the previous game, where we will find many inspirations from the Slavic mythology.

Thea 2: The Shattering is a hybrid of game genres. You could call it turn-based or survival. Maybe even RPG. It is tactical and it is rogue-like. Managing all these at once is a delicate dance. Even more, Thea 2 draws upon its predecessor by enlarging the scope of some aspects while adding further detail to others. On top of all this: Its narrative is inspired by the fantastic beasts a powerful deities of Slavic mythology. How cohesive is all of this and how confidently can the player learn the steps?

To easiest understand all of these moving parts and how they all work together, it would do us well to break the game down into three functional layers. The Meta layer is on top, broadly defining the statistics of how the game rolls out. The Map Layer is the overworld of each campaign of Thea 2. The Logistics Layer is where the nitty gritty stuff happens. The map and logistics layer handily influence each other, while the meta layer keeps your grand decisions focused.

Let’s start at the bottom: 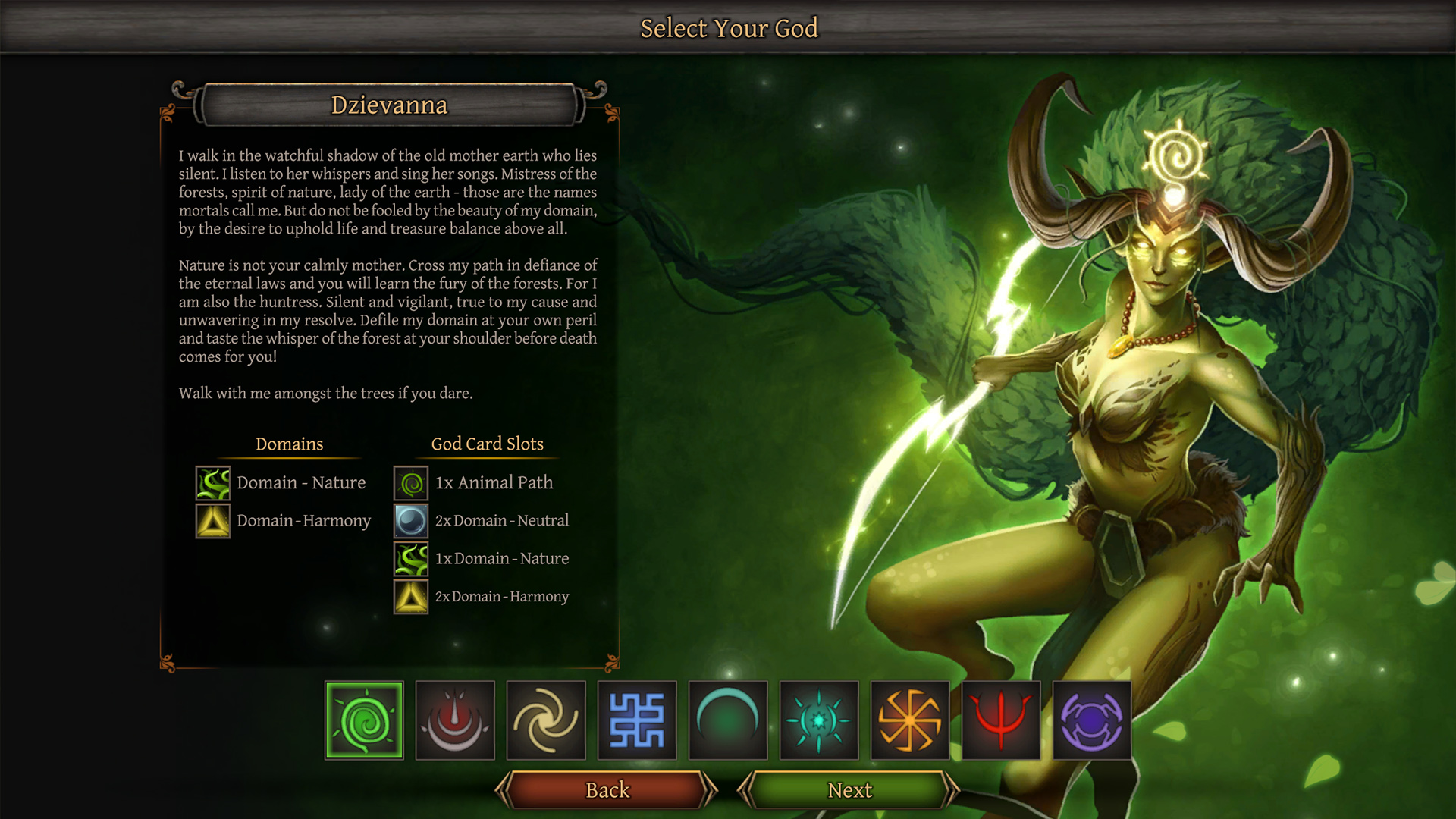 This is where the bulk of your time will be spent. These are the pages where you design items to be crafted, equip your expedition, manage resources, and assign members of your expedition to cook meals, perform rituals, gather resources and other tasks necessary for survival.

The expedition members are the game’s lifeblood. Each member is assigned a class and has his or her or its own ratings in various stats. Strength, Intelligence, Mysticism – these are the primary stats to build a party around. Likewise, each member has his own productivity rating, influenced by these primary stats. Other stats include a character’s efficacy in card conflicts (more on this later). And when enough points have been accumulated, characters will level up, further honing their specialized strengths.

Stats. Stats. Stats. Thea 2 is bursting at the seams with stats to consider and build upon. Equipable items can buff these stats as well. Items drop from encounters, or can be crafted from resources gathered. Crafting is easily one of Thea 2’s strong points, as well as one of my favorite aspects of the game. The crafting is more than just lumber + iron = sword. All the basic resources have several derivatives with values that can have tremendously different effects on the attributes of what is being crafted – like, say, adding poison dmg or a mystical AoE. These items have very real and functional numbers that can aid in gathering more resources or talking (or fighting!) your way out of an encounter.

Which brings us to Thea 2’s mini card game.

As you make your way through the world of Thea conflicts/encounters of various types will fall upon you. These can range from direct physical confrontations with, say, undead skeletons, or they can have a more abstract conflict such as combating the laziness of your workers. Your characters are the combatants, and their stats are put to use.

Thea 2 expands the card game’s battlefield, as opposed to its predecessor’s more linear approach. More open slots mean more positioning options. More positioning options means a deeper layer of tactical strategy that was absent in Thea: The Awakening. The card game is a primary mechanic of Thea 2. A significant portion of your work in building characters is preparing them for these encounters. The outcomes of which can greatly alter the course of the overall campaign.

Once your expedition party is equipped and has stored enough food and fuel, and stats are as maximum as they can be, they can take to the map. Hex-based, the map is where the story of Thea 2 unfolds. The party treks over various terrain keeping a keen eye out for resources, spawning encounters, and setting camp. The days and nights will cycle, and seasons will pass – each with their own boons and hindrances. Unlike the massive, unbroken pangea of Thea 1, The Shattering map hosts several land masses. Each island is distinct in its available resources, enemy threat level, and faction alignment.

Did you just say ‘faction alignment’?

Indeed, my friend. Once a settlement is built, the narrative aspect of Thea 2 kicks into gear. This world is more populated than the first game, with factions peppered throughout the map. These factions weave themselves into the overall story arc of The Shattering. Friend them or Foe them, factions play a big role in how you interact with the world and progress through the story. 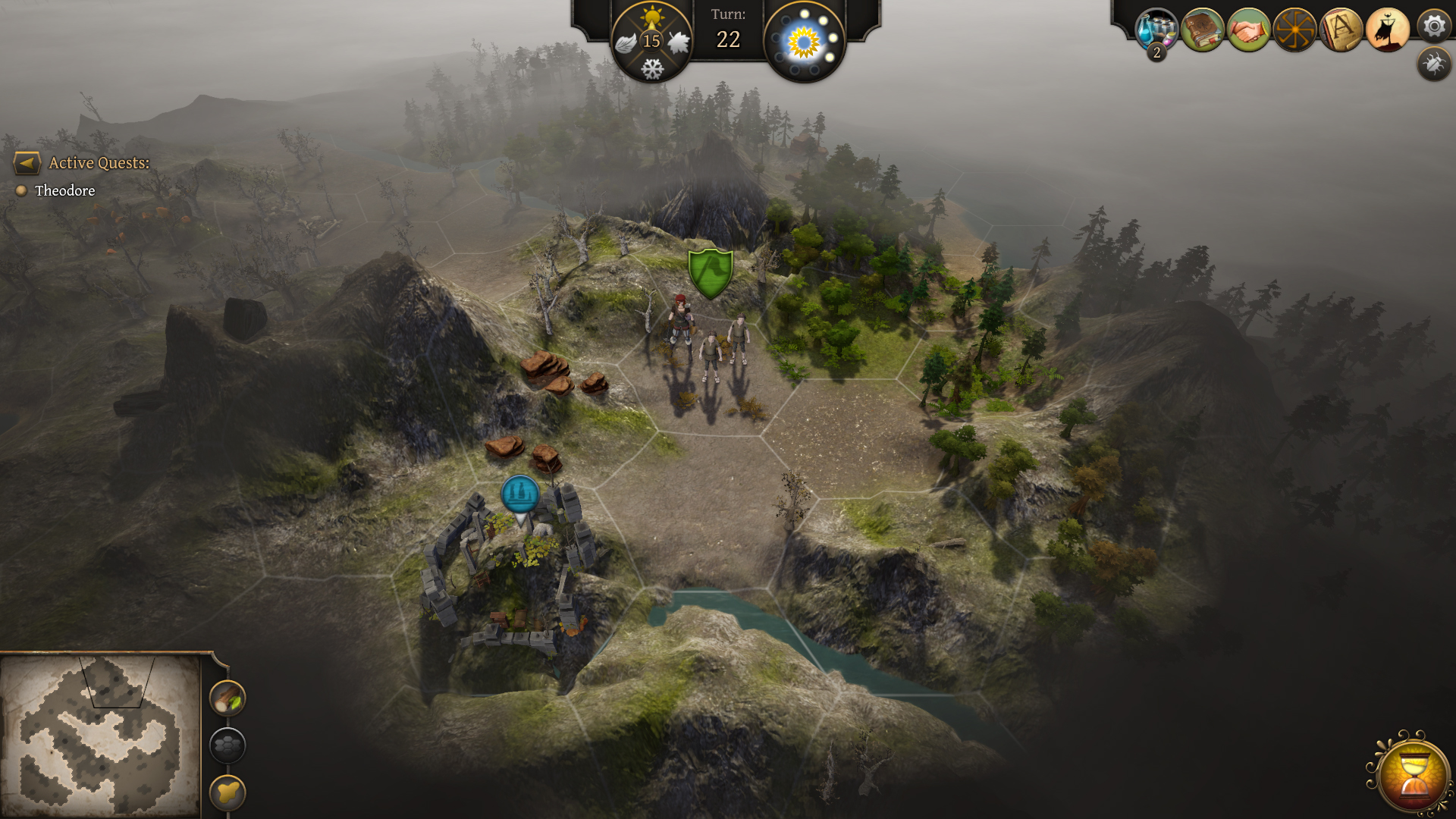 A major grievance I have with Thea 2 is the repetitive nature of the early game storyline. See, If this game were some grand RPG, these early story dialogs would be experienced only once; they would be read, understood, and the player would move on. The problem with Thea 2 is that campaigns can (and do!) abruptly end. You cash out, bank up your God Points (more on this later), and then begin a new a run. Even though the game is successfully built for variation at the logistical level, the same narrative trees and early quests become so repetitive (and convenient to skip through) that they lose meaning and significance.

The story is closely tied to the world. Quests become available as you choose your way through dialog trees, many of which are convincingly voice acted. The writing tends to get a little lopsided, as sometimes, even when the same character is speaking, the tone quickly shifts from poetic and elaborate to colloquial and informal. A small complaint, but this inconsistency detracts from the game’s immersion.

Thea 2’s immersion is its strongest aspect. The game is wonderfully paced, and there is never any confusion about what to do or how to do it. This is a pretty remarkable feat when you take a step back and consider just how much of a juggling act Thea 2: The Shattering is. And on top of that, the sheen across the entire surface is the music production.

The music is full of ethnic, moody atmosphere. One of the most memorable moments I had was when I had just lost a member of my expedition, my master gatherer, to a nasty mental breakdown. It was a dark, difficult moment, especially when I had to decide which workers to shuffle around, to fill the vacant spot. The music was somber and the sound of the rainy conditions only enhanced the sober mood. It was terrible and it was beautiful.

The first step in creating a new playthru is selecting which deity you will play as. Each has his or her own way of coloring your overall experience of Thea 2. One deity, for example, boosts the output of your crafters; Another makes your party lethal killers during the night hours. The choice is yours. In addition to these base modifiers, there are dozens of secondary modifiers that mostly affect your early game experience.

These modifiers, the deities and the secondary boons mentioned above, are unlocked with God Points. These are points the summation of a previous run’s achievements. The game factors in benchmarks like turn total, strongest member of expedition, and the like. This number is then multiplied by whatever difficulty settings tweaks you made in the metal layer before even generating the world level. It is a very familiar rogue-like mechanic, and it works so well.

The amount of customization available in the meta layer allows you to create just the type of game you want to play. And of the many genres that successfully Thea 2 juggles, it is a true testament to the designs of MuHa games.

Thea 2: The Shattering is a hard game to describe because it does not conform to any archetype – It doesn’t play it safe. To say it is a grand strategy would be erroneous because in-game events can suddenly bring your campaign to a bloody, and sometimes unfair, ending.

And yet, to call it a Roguelike would only hold true in that any progress made in a campaign – any XP – however piddly in amount, is accumulated to help in unlocking and leveling up new overlords to play as in subsequent playthroughs.

To say it is a tactical game can likewise be misleading because all encounters – whichever of the half dozen types one may be – are not handled in a traditional point-and-click hex arena but rather in an innovative and fun tabletop card game setting.

Give the game whatever label you want, but Thea is carving its own path. In the end what MuHa Games offers is a fun, immersive, interesting game that begs to be replayed. And with the modding possibilities and MuHa’s history of adding free DLC, the story of Thea 2: The Shattering is only just beginning.