The Tarnishing of Juxtia Review

With The Tarnishing of Juxtia, developer Actual Nerds and publisher Mastiff aim to deliver the definitive Dark Souls of 2D platformers, a Metroidvania that will test both your skills and nerves. It’s a hauntingly beautiful pixel-art platformer where each fight is a challenge, each enemy a potential nemesis that requires careful planning and impeccable timing to eliminate. Sadly, its great ambitions fall short due to a flaw that makes it all a tad too frustrating. 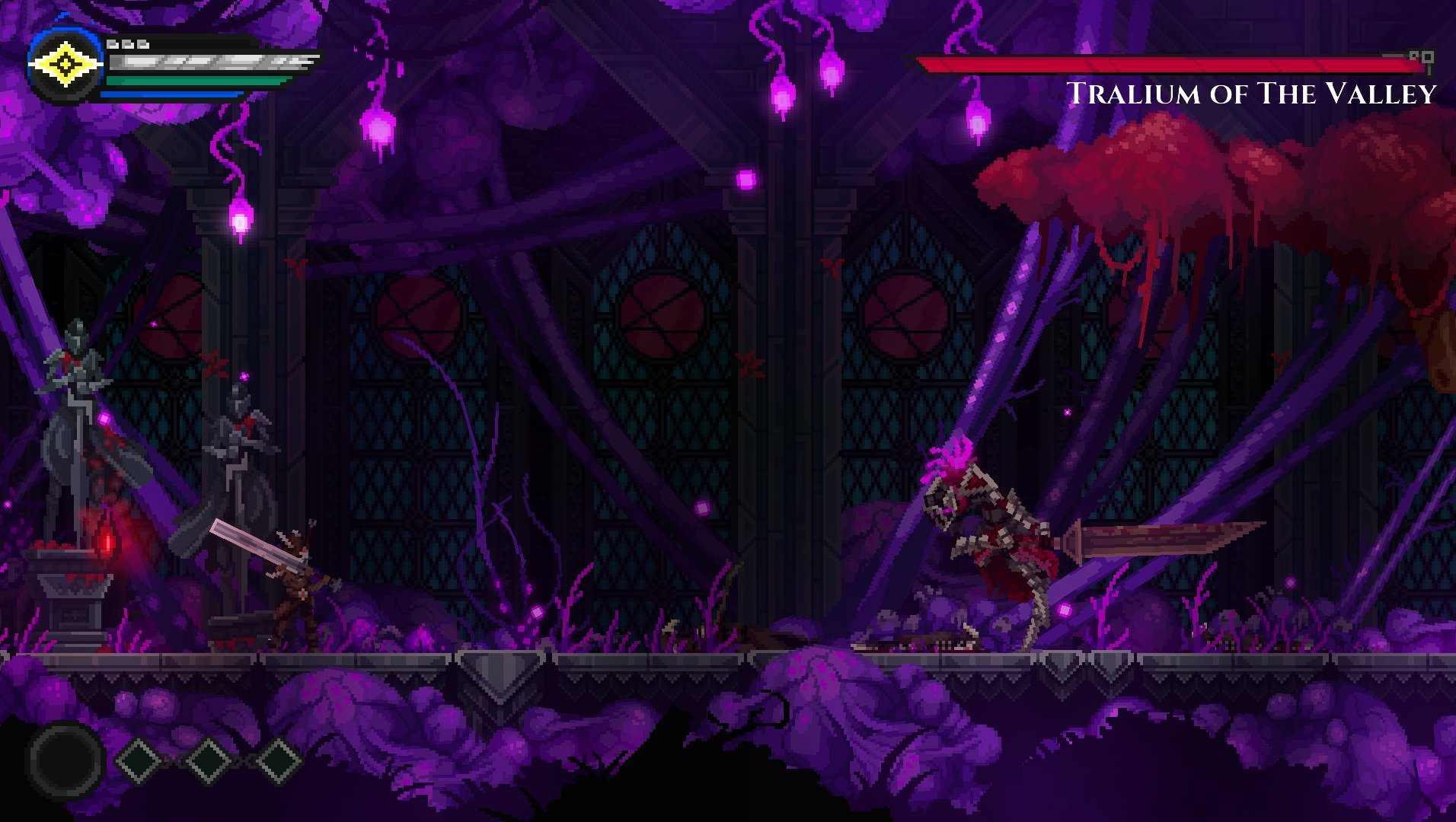 The story touches upon the traditional grim tale of a corrupting evil force and how you must help a Goddess battle this Tarnishing. Although there are frequent glimpses of the Goddess and other characters that will move the story forward, it didn’t truly resonate with me, but it serves as a functional yet shallow reason to take you through several different environments. Fans of Metroidvania games would be anticipating a deep combat system and a multi-layered map to keep them guessing, and in that regard, The Tarnishing of Juxtia delivers… somewhat.

The character controls great, with very fluid and intuitive movement. He holds onto ledges in a natural way, moves swiftly across the map while dodging hazards such as spikes, buzzsaws, and rolls like the greatest disciple from the Souls school of rolling.

Combat is of the typical kind where you take one too many false steps and you’re dead. You may use one of your binding cloths to heal and get through a tougher fight, as it allows you to instantly heal a few times. You can replenish this item in the bonfire… I mean, the fountain, so don’t make the mistake of neglecting its utility, as it can be a true gamechanger. Fountains are the checkpoints of The Tarnishing of Juxtia, a place to heal and enhance your hero. The feeling of being able to finally take a long, deep breath is otherworldly, you soak in this sense of achievement and inner peace that few games are capable of.

You’ll find a pleasant diversity of melee weaponry as you progress, with two main weapons to switch on-the-fly. Finding the perfect balance between a fast, effective weapon and a slower, heavier weapon is recommended to succeed, as you learn enemy tactics, strive for that perfect timing, and jump and roll out of tricky situations. Don’t be afraid to get out of dodge if low on health – a dead hero is infinitely worse than a hero that takes a moment to collect its thoughts.

Heavier weapons come with a special move where you must hold the action button for a stronger attack, but the second that it takes to charge may be enough to get you killed. It’s up to you to find the perfect timing and judge the distance to the approaching threat.

Die and you’ll drop all the points you have collected so far by killing enemies. These points are used to level up your character’s abilities, so you can see how valuable they are. Play your cards right and you can add a few more points in your way to retrieving the fallen loot, ending up with even more points to level up your abilities; however, if you feel like taking a safer approach by rushing, you may as well go past every creep until you reach the spot where you were killed off. Reach the fountain and you can upgrade your abilities, which include Strength, Dexterity, Vitality, Endurance, Wisdom, and Intelligence.

The Trouble with Weapons 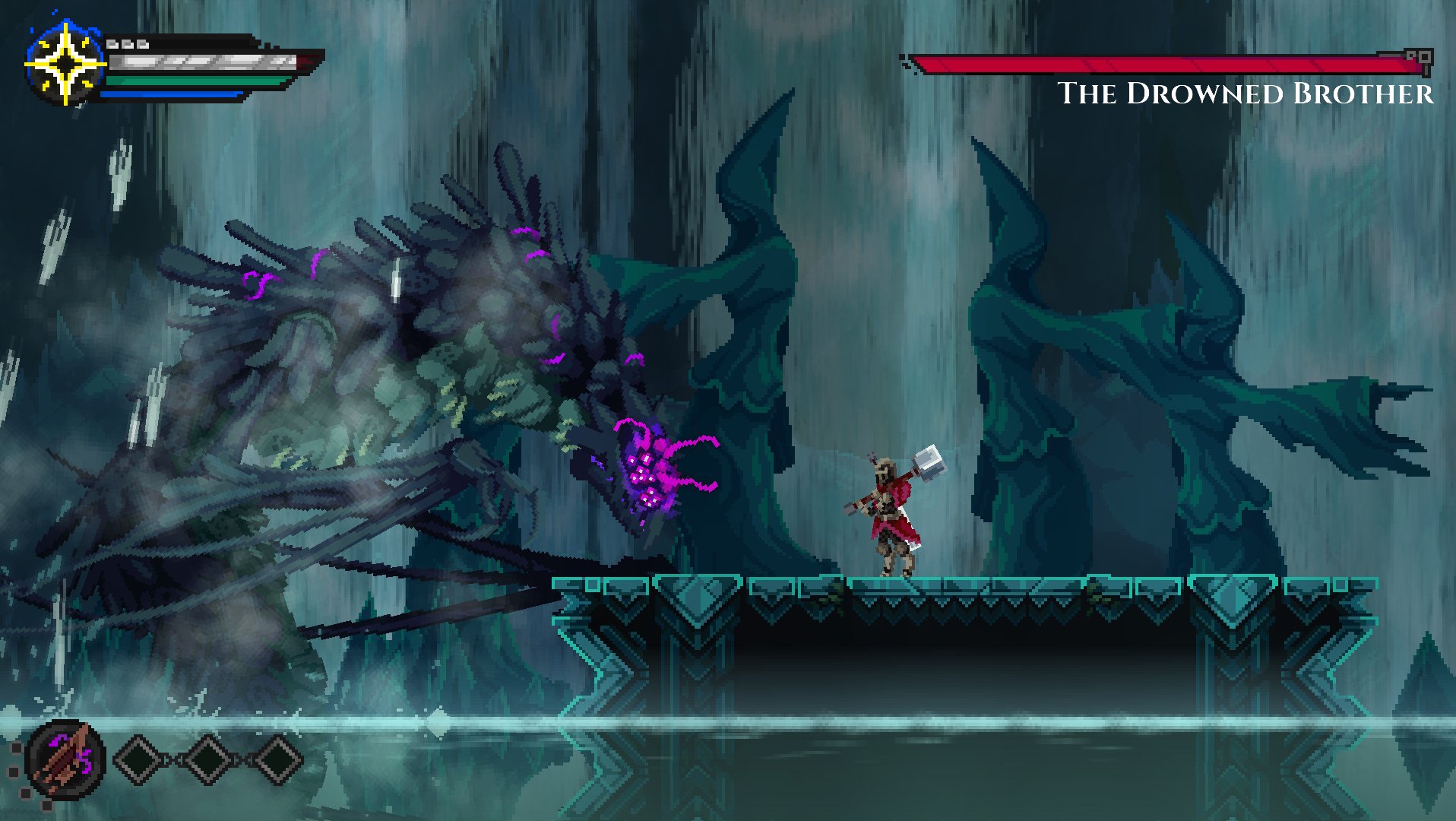 While you jump and roll with a grace that would make Samus Aran proud, it’s the way that you handle weapons that spoils the big picture. As expected, heavy weapons are naturally slower to use, but that’s not an issue in itself – the problem is that once you start the attack animation, there is no way to cancel it, not even by rolling, which means you’ll be frustratingly setting yourself up for failure plenty of times.

Without an option to cancel your action mid-move, which is a weird design decision for a game where split-second decisions are crucial, you must double your efforts to time every move perfectly, then run to a safe distance for a quick heal – if feasible – then get back into the fight, rinse, repeat. Die and you’ll retrace your steps over and over from the last fountain, hoping that this time you’ll get the technique just right – for as many enemies that come your way.

This is a shame because The Tarnishing of Juxtia brings some impressive boss fights into the mix. Both in style and creativity, these are epic moments to look forward to, as you strive to learn attack patterns and carefully time your dodges. Frustration may creep in, indeed, but that is part of the deal and by now you know what you are getting yourself into. Luckily, you can skip the cutscene leading up to the boss reveal, to some extent decreasing your level of fidgeting.

The Tarnishing of Juxtia looks terrific in its glorious retro art style, with fantastic environments occasionally showcasing a terrific sense of depth, as multiple layers move independently in the background of this epic dark fantasy world. Character design is another plus, especially for the bosses, but other creatures reveal a great degree of care in this regard. You may find some tunnels and other places to be slightly repetitive, but that’s also why discovering a new environment feels so rewarding.

Sound and music follow suit and are of great quality as well. The weapon effects are brilliant, with the crunches and slashes almost piercing your ears with joy; environmental sounds are noticeable in a positive sense, such as the waterfalls with the almost imperceptible droplets – pay attention to the details in your surroundings and you’ll get the most out of the experience. The soundtrack is mainly heroic battle music that wouldn’t be out of place in the darkest fantasy epics, and it really hits you when it starts playing.

For all its qualities, The Tarnishing of Juxtia deserved some degree of acclaim. However, it falls short due to the inconceivable lack of move cancel, artificially swelling its difficulty and ultimately slapping players in the face for their resourcefulness, one that they will have to dial down for this game.

Any Souls-like should have a finely tuned combat system at its core, and this game fails right there. Not because weapons are slow; not because it can be though; it’s because the importance of the action cancel mechanic was misjudged. Still, we’re left with a very enjoyable game, albeit an often frustrating one, with top pixel art and sound design, so there’s a lot to like about it. It’s too bad that the lack of a single mechanic ended up tarnishing this impressive adventure.