Ghostbusters is the kind of source material that is screaming to be turned into a videogame, and we’ve had our share of them in the past, most of them middling. IllFonic’s Ghostbusters: Spirits Unleashed probably isn’t going to be the one to go down in history, although there’s some fun ghostbusting to be had in this asymmetrical multiplayer take on the franchise.

Who You Gonna Call? 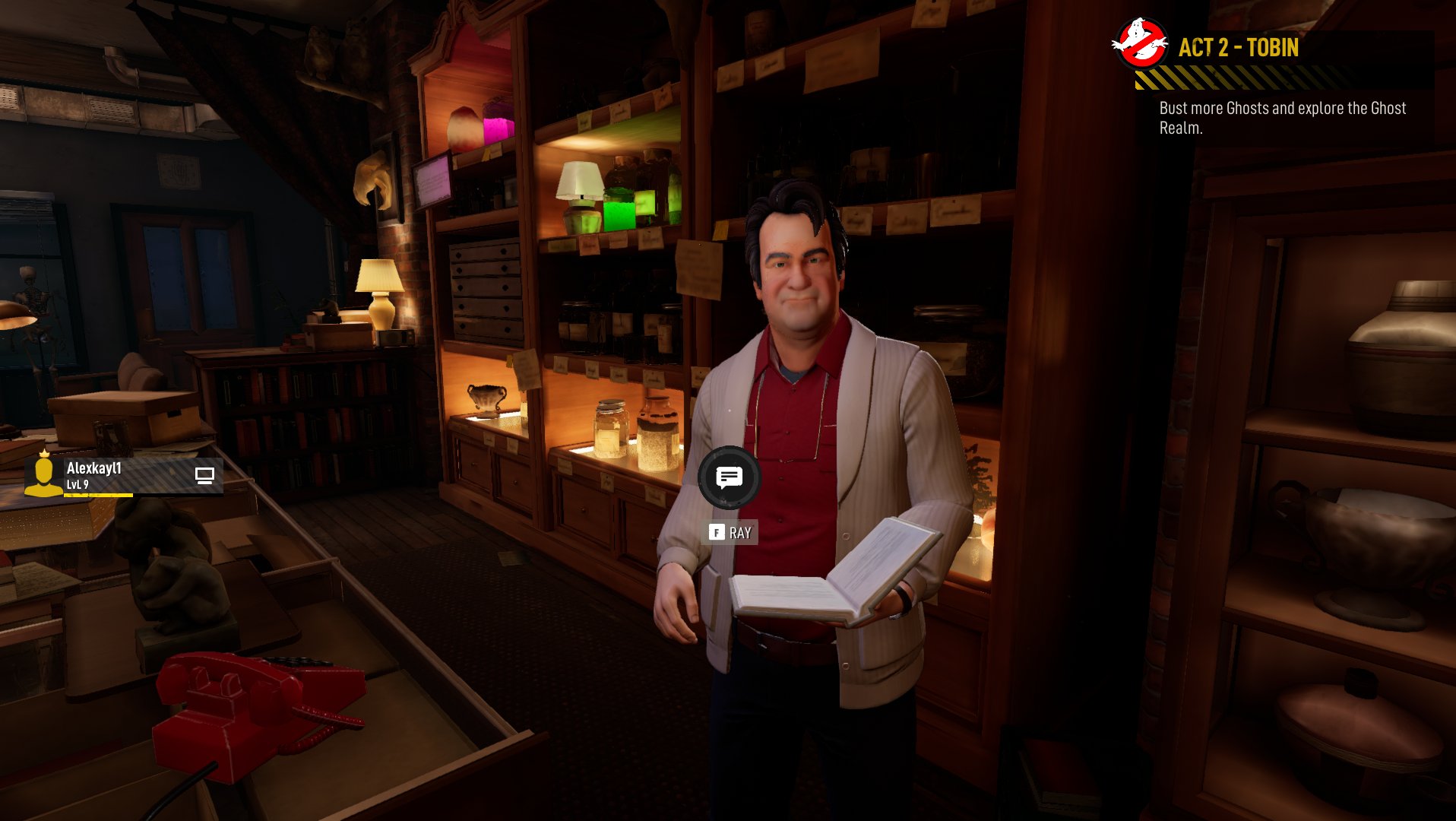 When we think asymmetrical multiplayer, two names instantly come to mind: Dead by Daylight from Behaviour Interactive, and Friday the 13th: The Game from Illfonic. It makes perfect sense that the latter was tasked with breathing new life into the Ghostbusters franchise by doing what they do so well – Predator: Hunting Grounds is another asymmetrical game from their backlog, so they know the genre well.

There’s no denying that Ghostbusters has all the makings of a fun 4v1 busters versus ghosts multiplayer game. Execution, however, may not be that simple, but it helps that we get a couple of high-profile voices to ease us in during the tutorial. There’s quite a bit of learning to do, and not all of it goes as smoothly as you might expect.

The tutorial drags on for longer than it should, with too many monologues and unnecessary exposition that result in the exact opposite of what was surely intended – it becomes boring and flat. Even having the mighty Dan Akroyd and Ernie Hudson lending their voices and likenesses to their timeless characters, it still feels a little too much. The Tobin’s Spirit Guide chapter is a perfect example of this, as we finally unlock the option to play as a ghost and must endure several minutes of incessant rambling that doesn’t add anything worthwhile to the proceedings or lore. It made me wonder why we had to listen to such a long monologue before the ghost tutorial is unlocked at last, and you start learning how to control your new ectoplasmic form.

Before heading out as a new Ghostbusters recruit, you must dive into character creation. Despite an interesting array of customization options, the result will always have this plastic and somewhat unpleasant look that is a middle ground between weird realistic and ugly cartoony. The game may be trying to aim for a Fortnite style but mostly fails, especially the player characters that are completely devoid of charisma. Oddly enough, the randomize function will mix up gender and voice like that’s not an issue, so you can have a slim female character with a guttural male voice – you can imagine how silly those one-liners sound in the middle of the action, and it feels more of an oversight than some intentional comedic hook. 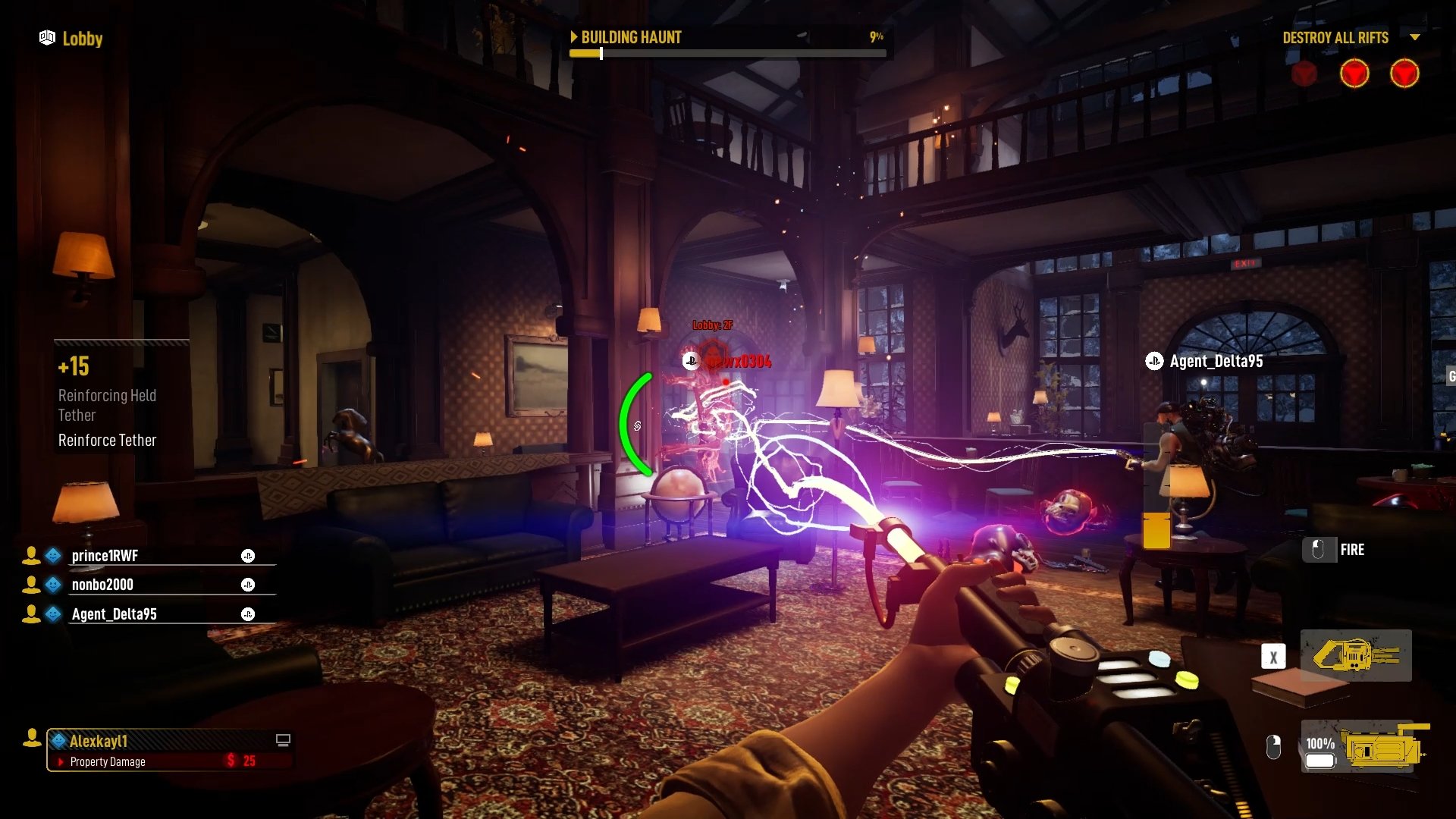 Walking on the shoes of a buster is a fairly straightforward affair. You and three friends or bots will enter a location among a handful and search for rifts, ultimately revealing the ghost to capture. Armed with your trusty Proton Pack and most likely a complete disregard for teamwork – you may strive for it, but going solo almost yields the same results – the bland locations lack some true layout variety or intrinsic elements to make you choose one over the others. Only a couple of them look good and suitably atmospheric, the Hudson Canyon Lodge and the RMS Artemisia, the rest of them verging on the monotonous side, the Rock Island Prison being the main offender.

True fans of the series may get a kick from exploring the Firehouse, the hub where you do every task in-between assignments and listen to Dan Akroyd/Ray Stanz’s incessant ramblings. From the main jobs to side-hustles or gear customization, you have all the resources that you need to develop your character as you complete missions and enhance your equipment, secondary gadgets included. However, it ends up feeling bare in a way, a blatant lack of interaction possibilities sucking the fun out of the place – with arcade and pinball machines, a snooker table, and so many other items, this is a missed opportunity to engage the player and make this hub feel more than an overblown space.

The main gripe with the busting in this asymmetrical multiplayer game is that it’s not much fun. Sure, it’s interesting trying to capture a ghost and lock it inside the trap while in a coordinated team effort, but the other tasks are monotonous. Close three rifts, pick up fungi because a certain amount will give you an XP boost, and comfort braindead civilians in an unnecessary timed event, or they will flee the location like headless chickens. Let the Building Haunt meter fill up and the ghost has won the match. There are some nice moments when you’re firing your Proton Pack and the effects look cool, but most of the matches left me cold and far from the excitement conveyed by the action scenes in the best movies of the franchise, Afterlife included.

By the way, the whole “don’t cross the streams” warning is lost in the game, and even the liberties that Afterlife took in this regard are ignored – in Ghostbusters: Spirits Unleashed, you cross the streams and nothing good nor bad happens, just sheer nothingness to greet your action. 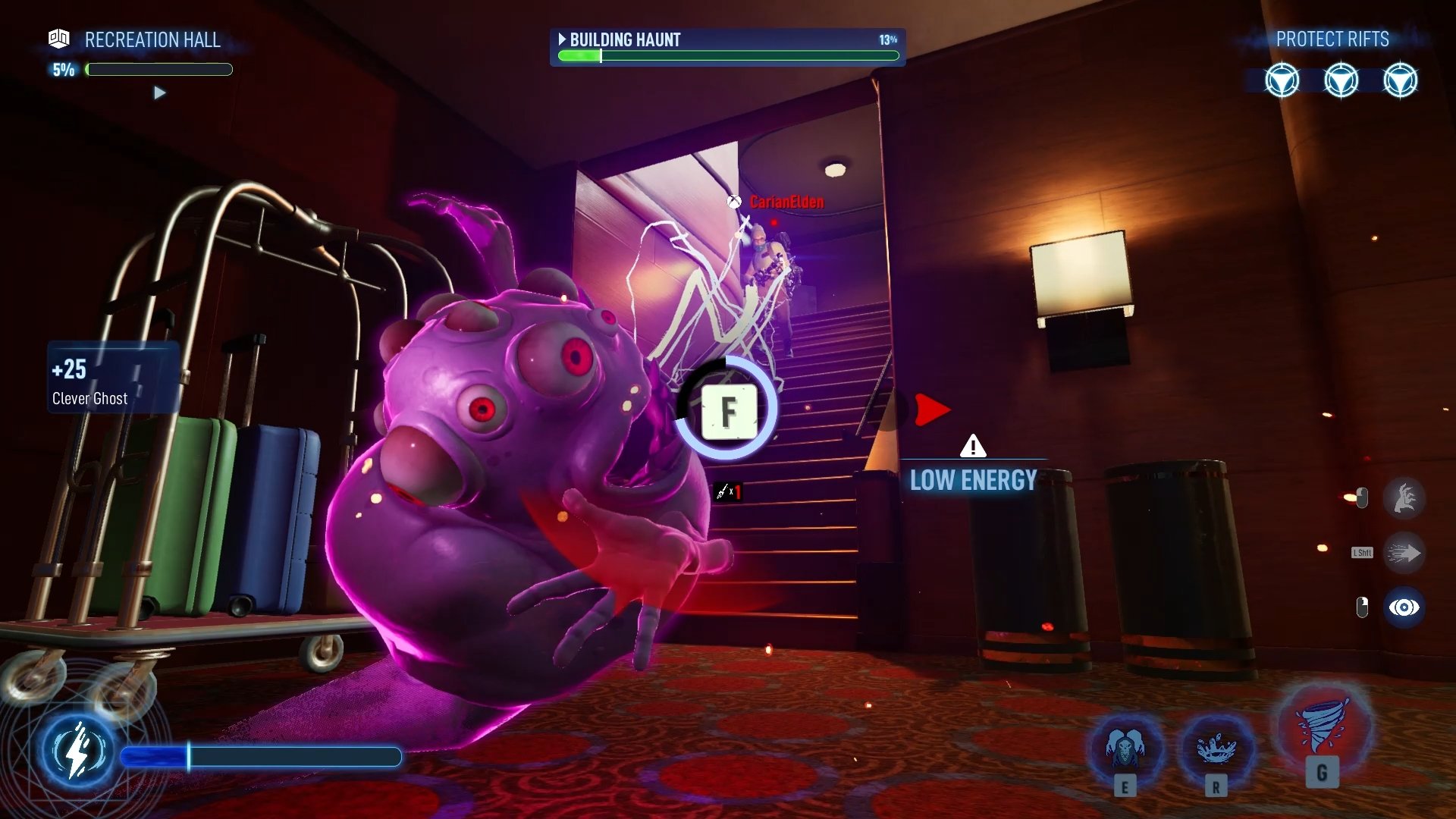 After a few matches you’ll unlock the option to play as the ghost. This means that it will be you spreading ectoplasm and haunting the location against four busters who are trying to capture you. The potential for some fun gameplay is there and there is a total of five ghosts to unlock, but this side feels somewhat contrived. There are a few powers to keep busters on their toes, but most of the match will be spent flying around, avoiding being captured by the four players on the rival side.

Possessing objects as a ghost could bring a nice change of pace to the gameplay, but this aspect is severely lacking in physics. Controlling signboards and other objects isn’t entertaining, you don’t get to fully enjoy a wealth of realistic physics as these items will fight every law of physics and remain vertical, no matter at which angles you try to bump them; a trashcan or any other item will happily climb a set of stairs as if it was on wheels, no tumbling down or whatsoever. Furthermore, bumping into smaller objects causes no reaction, you might as well be colliding into a wall as the effect is the same. So, this possession feature is less enjoyable than it could be if you had the opportunity to experiment and have fun with physics while escaping the busters.

No matter which side you choose, it isn’t as fun as it could be in theory. The matches quickly become stale and the whole Ghostbusters branding isn’t strong enough to make it feel like a remarkable part of the franchise. There’s not an ounce of wry humor, the graphics lack character and awkwardly sit in this middle-ground that isn’t sure if trying to cater to fans of the first movies or to the younger Fortnite crowd. There’s the unmistakable licensed theme to welcome us into the game, but after that we only get a handful of random dull atmospheric tunes that feel right out of any Halloween music playlist. 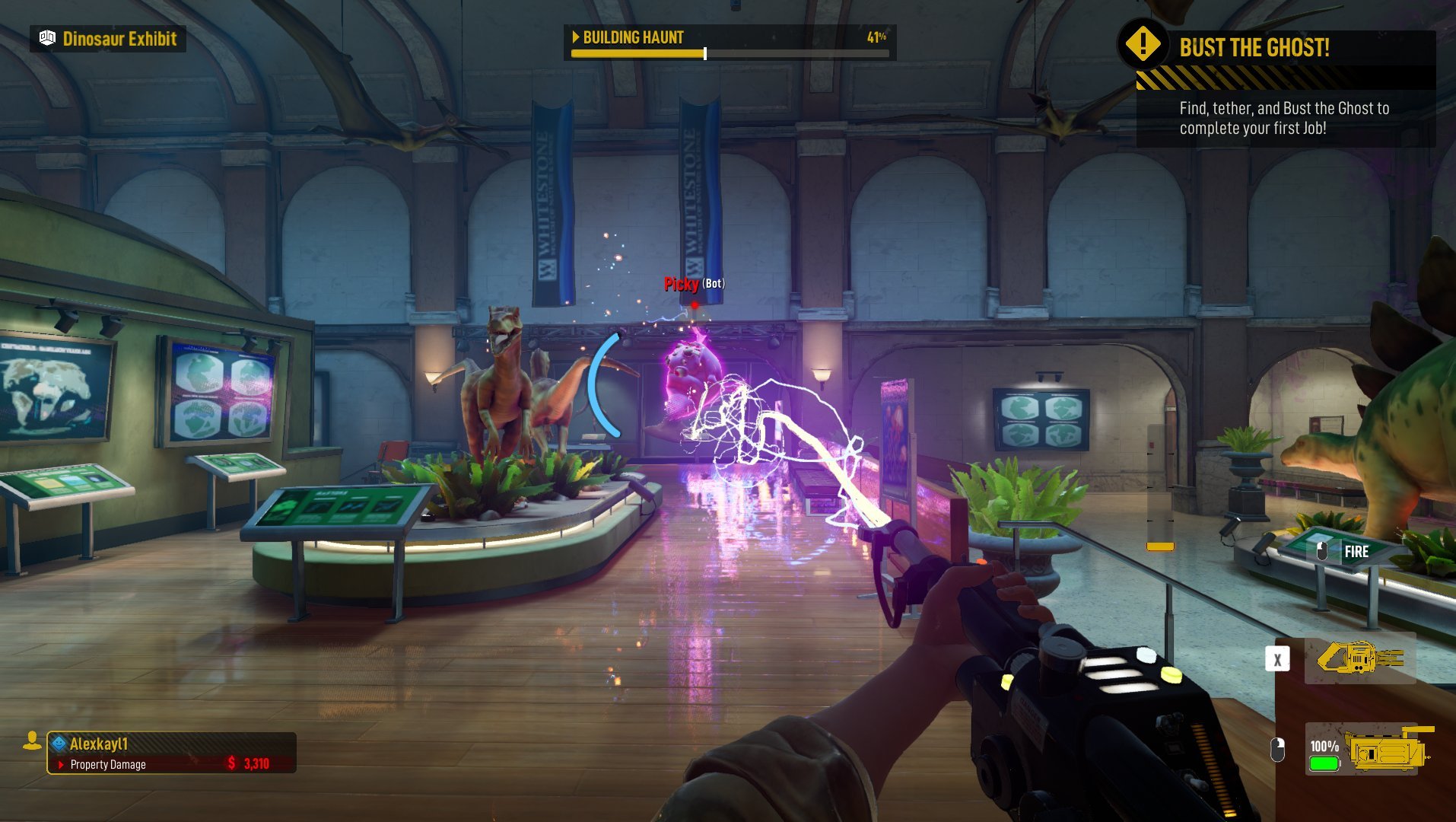 The premise of Ghostbusters: Spirits Unleashed sounded more entertaining than it truly is. The busting can be fun during a few minutes but quickly becomes repetitive, the locations mostly bland and too alike to infuse some much-needed variety. Either as busters or ghost, this feeling of tedium creeps in and there isn’t much incentive to keep grinding level after level. Some may argue that it becomes better with friends, but aren’t all games like that?

Die-hard fans of the franchise may give Ghostbusters: Spirits Unleashed a shot, but don’t expect anything other than your regular asymmetrical multiplayer game with a Ghostbusters theme on top. If you’re on the hunt for any game in the genre, Dead by Daylight will end up being your best choice, unless you’re adamant on having a hefty dose of ectoplasm.