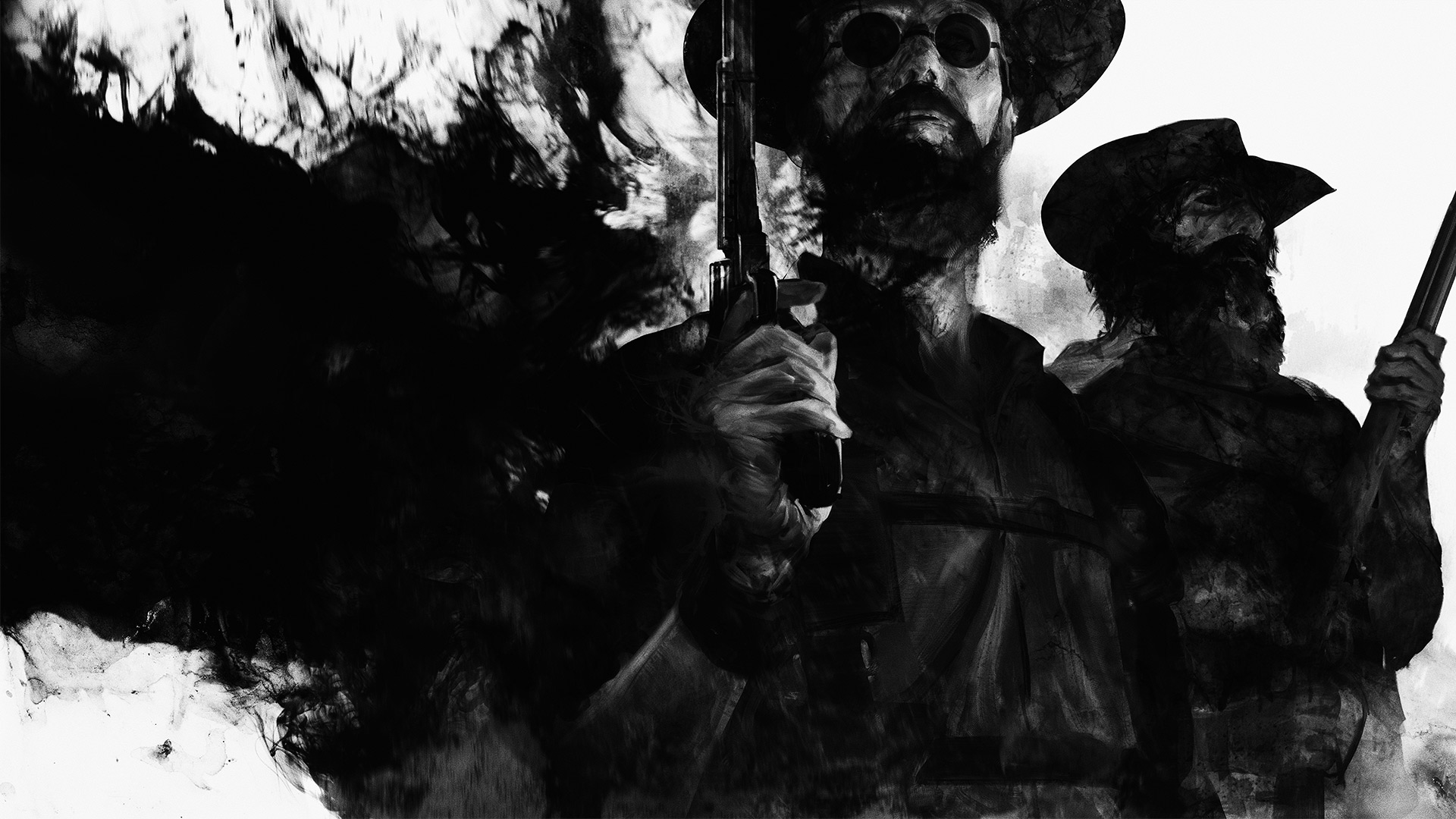 Hunt: Showdown is an early access first-person shooter with Battle Royale style gameplay whose mastery of tension, theming, and tactical components has birthed a game where every match is as exhilarating as the next.


Hunt sees you playing as a bounty hunter in the Louisiana swamps, sent to hunt down and collect bounties that have been set on ghastly horrors. In a match your goal is to find clues to locate a monster lurking in one of the map’s compounds, kill the monster, and banish them back to whatever hell it came from. There’s a catch though, there are eight or nine other players that are trying to do the same, and will stop at nothing to retrieve that bounty all for themselves. Even if you can do the impossible and banish the beast you still have to escape with the bounty in your grasp.

Hunt introduces a thematic natural way to condense players into one area using an objective style system, you will need to find three clues to deduce where the bounty is dwelling. With each clue the number of possible places the monster is hiding narrows. This leads the players to a smaller area where chances of encountering other players is greatly increased but does not force players together like Fortnite or PlayerUnknown’s Battlegrounddoes, which feels more realistic. And how does one go about finding these clues, you may question? Well, as a hunter you are gifted with a supernatural power: Darksight. This power is an alternate vision (similar to Eagle Vision in earlier Assassin’s Creed) and allows the player to see hidden information. Clues will appear as glowing turquoise orbs in the distance and are hidden inside some of the compounds. However you can only see clues that are in close proximity to the player.

A clue will appear as a small crater in the ground and you will need to perform a ritual to learn its knowledge, it involves holding ‘F’ for about three seconds then running in fear. Easy peasy! After you’ve done this a portion of your map will be greyed out, slowly guiding you towards your goal. This idea grants players so much freedom, they may choose to contest for the boss or hang back and see what pans out from a safer area. 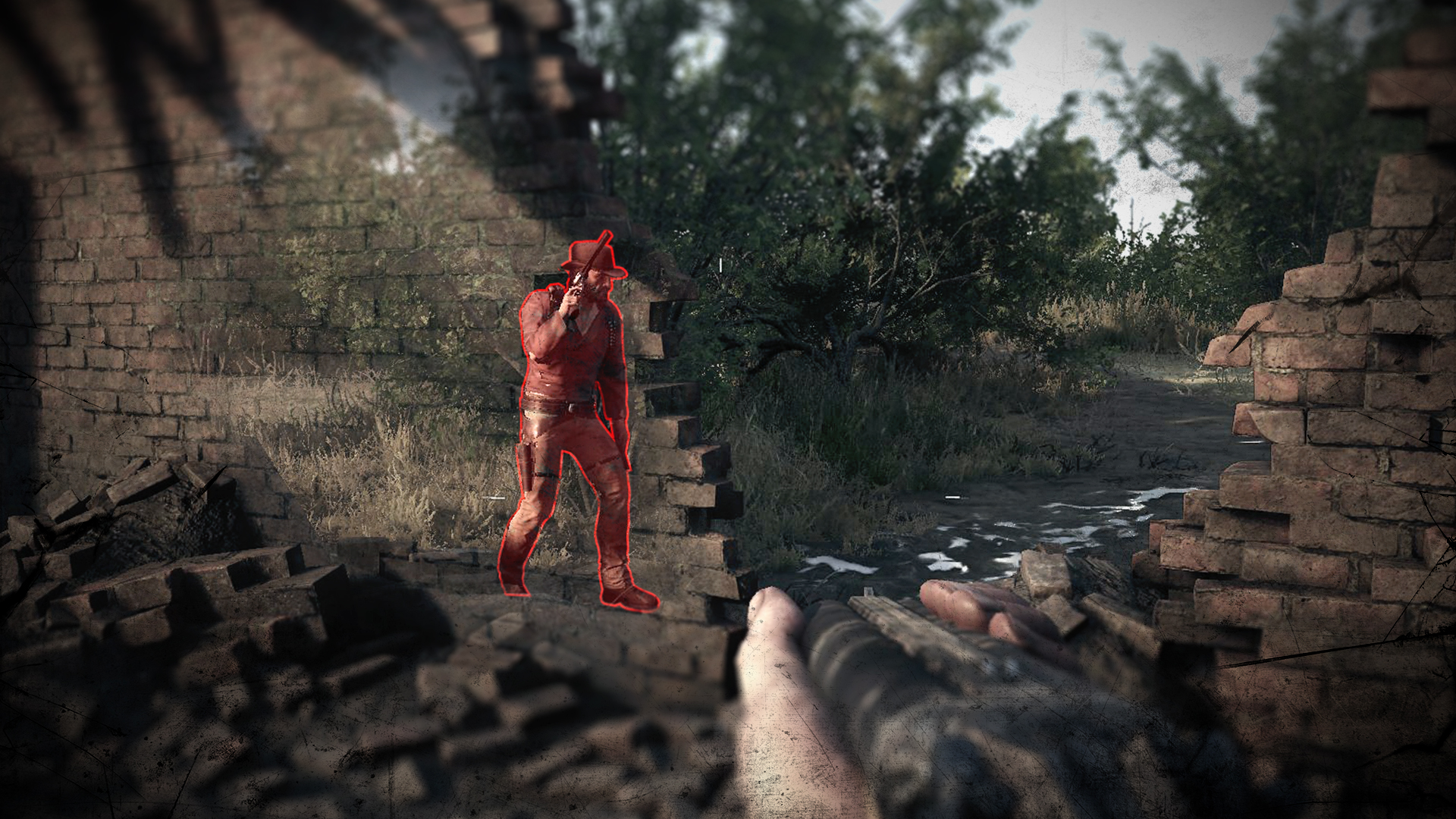 Once you or a rival hunter has triumphed over the monster in question you will need to banish it. This process takes three and a half minutes and anyone will be able to collect its reward once completed. When you begin the banishing it will alert all other hunters. Not only will they know that you have begun banishing it but where it is located on the map, prompting them to get what they came for. You are free to do as you wish during this 210 second period and many choose to cower in fear (totally understandable), or you may choose to set up traps and defend your prize (also reasonable). Right, three and a half minutes of “Hunt: Tower Defense” over and your prize is ready! YEAH!! You claim your bounty but now you have to get out alive.

Picking up one of Hunt: Showdown‘s bounties will send a notification to all remaining hunters about who picked it up and allows them to see your general position using their darksight. However, your darksight now reveals players through walls, but this buff only last ten seconds before it runs out. Not only are you now being hunted while you make your mad dash outta there, there are only three extraction zones distributed around the edges of the map. This add an intense chase scene style event where you need to get somewhere while being chased. Your pursuers may try to cut you off before you get there, which can be truly gripping. One thing that you may or may not enjoy is that some matches may drag on slightly. The match clock is set for one hour and some gamers might not have that much time for a single round. A small note but definitely one that should be stated none the less.

So, you got the bounty and got out alive. What happens now? You will get rewarded with an in-game currency that you can spend on better weapons, tools, and consumables. Your hunter will also gain experience based on activities you have done throughout the match allowing you to unlock and equip different perks. If any consumables were used you will need to restock on those consumables, and if by chance you lost a health bar you can replenish it (more on this later). Although, what if your hunter died in the last match? Well I’m afraid to say that Sheriff Woody is no longer with you. All of his equipment, tools, guns, and the snake in his boot, all gone. Take comfort in knowing that his memory will live on in your bloodline.

There is a separate counter for experience points and will allow you to unlock improved guns, perks, etc., similar to how a Call of Duty game would. This permadeath mechanic adds so much tension into every second of hunt. No one wants to lose all their stuff, ever. Losing a character is one thing but permanent scarring of a hunter can also occur. If you get gunned down during a heated gunfight your partner can pick you up but it will permanently lower your character’s health by one bar. This can be recovered by spending perk points between games, but it should not be taken lightly. Additionally, if you catch on fire due to another player’s attack or an environmental effect you slowly begin to burn. If the flames are not snuffed out you could also permanently lose a health bar. Ouch! Hunt: Showdown does not mess around. 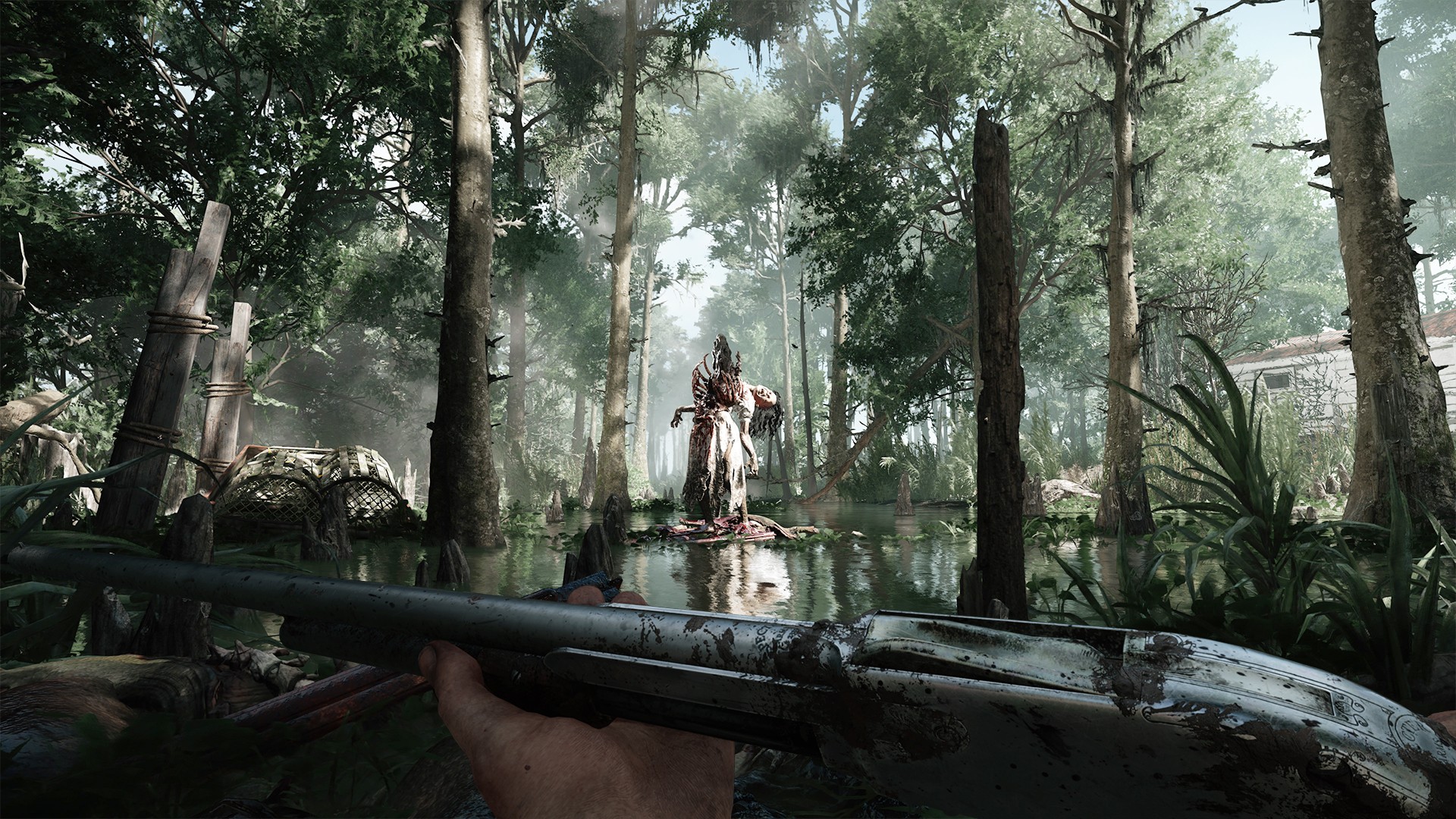 The danger of other players (and fire) is not the only thing that you have to worry about when traversing. Louisiana’s swamps are riddled with ghouls and horrifying abominations who should not be overlooked. These enemies can be devastating, especially in numbers. Basic zombie grunts are easy to thwart with minimal damage to the head but often come in pairs, triplets, or even a quartet (and definitely not a barbershop kind)! Other enemies like the armored and brute variants act as a sponge for damage by taking multiple hits or shots to kill. However, they will reward more experience, if you’re brave enough to face them. The hive and water devils act as an area deterrent tool, in my opinion. If you go near a hive she will send out a swarm of bugs to attack you, though she is frail up close. The water devils linger in the lakes, rivers, and ponds waiting for its prey to wade to deep. It’s often best to go around them (by often I mean stay away from these things, they have earned their right to be classed as a devil, you need not know anymore).

On the bright side though these minions provide great tests for the player. The world feels dangerous and predatorial making just getting around a threat to the player. I have yet to mention the hellhounds, these are large canines and, like water devils, should be avoided at all cost. Solo players can easily fall to a pack of these if they are not aware.

Hunt: Showdown wants to make you think like a hunter, and incorporates as many of our senses as it can.  Our hands are occupied with the mouse and keyboard so we’re left with sight and sound and my god has Crytek nailed it in this respect. The combination of a highly reactive landscape, excellent visual information, and sound design that’s so crisp I can hear my opponents picking their nose from 20 yards is masterfully executed enveloping a player into the game. This is the area where I think Hunt: Showdown separates itself from many of the other Battle Royales or first-person shooters.

To put this into perspective I’ll set up a metaphorical scenario. You are crouched outside a building and you suspect someone to be nearby. Here’s a list of some of the things you are likely to hear: crows, duck, chickens, dying horses, caged dogs, and all monsters will make noise when you get close to them. If the other person is not being sneaky, crows and ducks will also fly away, giving other visual information. You could also hear: footsteps on different terrain, doors opening, engines, hanging bottles that chime when knocked, and broken glass. There are so many audio cues that you can hear, perking your attention. This is what gives the player a feeling of real empowerment, making them feel like a tracker as they stalk their opposition using the endless number of audio ques.

Hunt: Showdown is a master class in sound design and should be admired for its originality and uniqueness. It empowers its players. Winning a match of Hunt feels like you’ve taken on the world and won. The excellent layout of the map accompanied by intuitive enemy placement makes the swamps of Louisiana seem deadly even for veteran hunter. Crytek is still polishing a gem that already has the finish and quality of a Triple A game, although you may need a Triple A PC to run it at its fullest. Although, the experience you get on the lowest setting is still remarkable. This is something to really sink your gaming teeth into. If you put enough time into learning Hunt's intricacies it will reward you enormously in return.