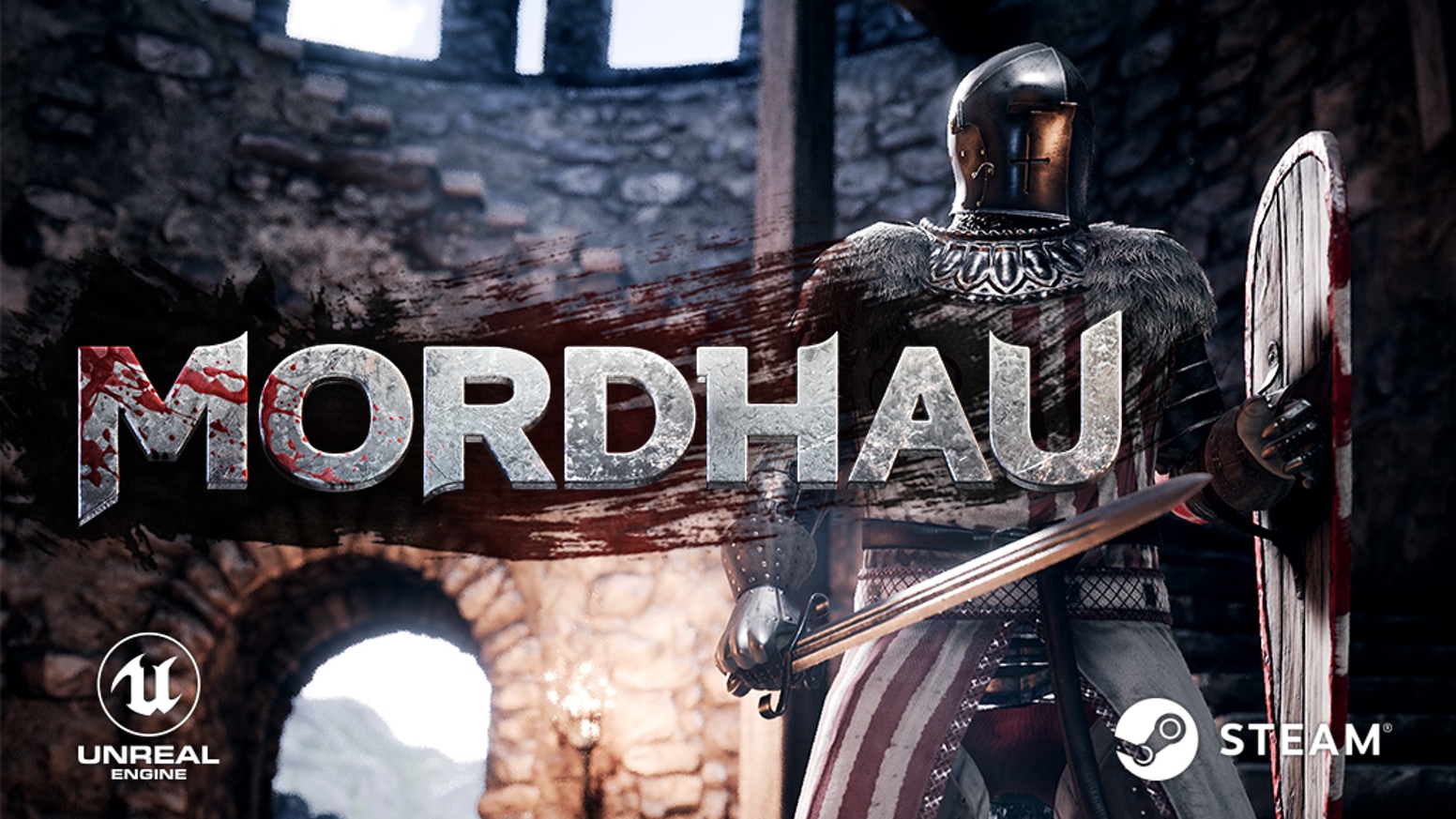 If you happened to be gaming on the PC in the early 2010's, you might have heard of a somewhat niche but highly popular multiplayer game by the name of Chivalry: Medieval Warfare. As the name may infer, this was a fighting title with medieval-era weaponry that paired simple to understand but difficult to master swordplay mechanics with an immersive team-based objective mode that made for some of the most engaging and blood-pumping competitive multiplayer I have ever experienced, even with some technical hiccups. Despite the success of Chivalry, developers Torn Banner chose to abandon the IP, with their next project bringing mixed results. As such, there hasn't really been another game that scratches quite the same itch in the near decade since Chivalry's initial release.

Fortunately, a few dedicated developers in Slovenia known as Triternion seemingly noticed this gap in the market and have effectively made a spiritual successor to Chivalry in their newly released game, Mordhau. Not only does Mordhau successfully emulate what made Chivalry so incredibly fun; it also increases the player count in the objective based mode to 64, and adds some meaningful tweaks and additions to gameplay that help it feel like a fully blown sequel to Chivalry rather than just a clone. Sadly, it also mimics some of the technical issues on release, and some quite effective battle tactics are less than chivalrous, but more on that later in the review.

If there was one thing that made Chivalry stand out among other medieval combat games, it was how weighty the weapons felt. Modhau absolutely nails this as well; whether you are wielding a two-handed sword, mace, spear, or keeping your distance with a bow, successfully landing a blow on an enemy is unbelievably satisfying thanks to the sense of weight and impact present in the combat. Weapons take up physical space in the world, and if you are swinging a lengthy blade or pole-arm in or near a building, you can expect to smack your weapon into walls and ceilings while attacking.

Where Mordhau manages to surpass Chivalry is in the moves available in combat. The basic controls are very similar; you can swing by motioning the mouse in the direction you want to attack, and hitting the mouse button. Turning left or right while swinging delays or accelerates when your attack hits. You can scroll the mouse wheel forward to perform a thrust, and scroll it back to perform an overhead attack. You can morph attacks by for example starting a swing, and then transitioning to a thrust during the windup, or feint by cancelling your attack during the windup. Parrying is accomplished by right clicking just before your enemy lands a blow; starting an attack while parrying will let you perform a riposte.

This should all sound familiar to Chivalry veterans, but Mordhau adds a couple more twists. A stamina meter is present, but it only depletes from jumping, or from swinging your weapon without hitting anything; this allows you to be aggressive as long as your sword is hitting your opponent, but deters wild swinging (though doesn't prevent it entirely). If you run out of stamina you can continue fighting, but risk having your weapon knocked out of your hands. 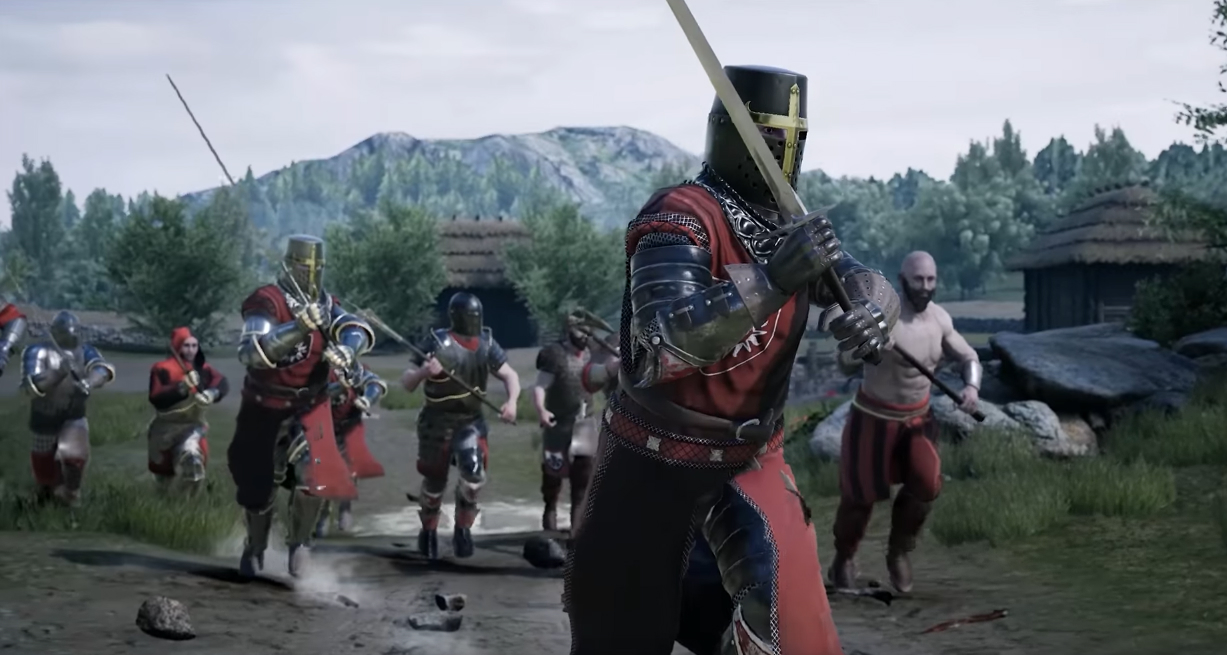 Even with a fairly robust tutorial, there is a lot to learn in Mordhau's combat, and becoming at all proficient will take some practice. However, many of these maneuvers will quickly become second nature, and the controls work extremely well, so I found the mechanics rather intuitive. Success in combat largely boils down to sizing up your opponent(s) and attacking unpredictably, while also trying to anticipate their moves and block or avoid incoming attacks. Once I got a handle on the combat, I found that it works extremely well and makes for some of the most intense, exciting and personal encounters I've ever experienced in a competitive game. Excellent ragdoll physics make killing blows that much more satisfying, and when you manage to run into a fight and take down several enemies with a series of well-timed blows you will feel like an absolute beast.

The other thing that made Chivalry so much fun was its excellent center-piece mode, Team Objective, that saw one team defending and another attacking through a series of unique period-appropriate objectives. Though Mordhau's equivalent mode Frontlines is not quite the same, it is very much in the same spirit. This mode is a tug of war with up to 64 players, where both teams are fighting to push the other back. Typically there will be a central objective that is a capture point, and once one team pushes the other back from this, they must then complete some more varied objectives, such as destroying barricades, pushing supply carts or battering rams, burning down tents, or rescuing prisoners. Players can equip toolboxes that allow them to build up fortifications in certain spots, though they can be destroyed by the other team, similar to how fortifications work in Battlefield V.

Frontlines has big enough maps and enough players to make for some truly epic battles as heavily armored knights and shielded warriors clash on the front lines, while archers fire arrows, and engineers build siege equipment and fire catapults. Knights will stumble around with missing limbs before finally collapsing. Horses are present in this mode, and can be mounted by anyone, allowing for some incredibly satisfying kills as you gallop through the battle and lop unsuspecting players' heads off, or knock them off their feet with a lance. Some will inevitably choose to forego the bloodshed and equip a lute, inspiring their comrades forward with a tune. A dedicated button for screaming ensures that there is plenty of haggard bellowing and grunting to accompany the chaos. Glorious is the only word that can adequately describe a close match of Frontlines. The biggest drawback is that there are currently just 4 maps available in this mode, and some maps do seem to favour one side over the other, though I enjoy playing on all of them.

Aside from the standard deathmatch and team deathmatch, which have a few more maps available, the other main modes are Battle Royale and Horde (Coop vs. AI that comes in waves). While there are some pre-made soldiers you can select, the game forgoes set classes in favour of a nuanced and flexible character creation system. When you go to create a new character, you start with a blank slate. You are given 16 points to spend on whatever you see fit; heavier armor requires and bigger, harder-hitting weapons require more points. Special items like bandages and healing kits, throwing daggers or fire bombs can be equipped for points, as can special perks that do things like reduce stamina use for certain actions, or let you keep fighting for a few seconds after a killing blow is delivered (hence the knights staggering around with missing limbs). In addition to this extremely deep and flexible character building system, you can customize the look of your fighter to a ridiculously granular degree, with a huge amount of cosmetic alterations for weapons and armor that you can further customize with things like colour and even sheen. No gear is randomized, there are no loot boxes or microtransactions. Rather, everything is unlocked with in-game currency, which is earned at a good rate through gameplay, though some items require you to level up your character to purchase.

Mordhau runs on Unreal Engine 4, which produces solid visual quality overall. Some maps look better than others; the forests of Taiga and wide-open battlefields of Camp look great, while the snowy wasteland of Mountain Pass is a bit less visually impressive. Animations are comparable to Chivalry, meaning they can look slightly awkward and stiff compared to something like For Honor, but you probably won't notice during the heat of battle. One potential issue is that the teams are red and blue, and if you have blood turned on, a blood-soaked blue player can be difficult to differentiate from a red player – friendly fire incidents are common. It is worth noting that when I originally installed the game on a standard hard drive, loading times were very long to the point I got kicked from Battle Royal matches for slow loading, and I also experienced freezing on the character customization screen, though moving the game to a SSD resolved these issues.

The audio is similarly solid; you will know you successfully chambered an enemy thanks to the sound of metal sliding against metal, while landing a blow has a nice meaty sound. Players screaming and yelling while horses gallop around and catapult projectiles land with a thud do wonders to enhance the atmosphere of battles. There is no music during gameplay, aside from lute players, though the score on the menus works well enough.

Though Mordhau is certainly not free of issues, the overall experience has been so exciting and enjoyable that I haven't been able to stop thinking about this game since I started playing it. The ultra-violence comes across as slapstick rather than traumatic thanks to the over-the-top voice acting and sillier aspects of the experience. Though niche historical games can sometimes struggle to attract a large playerbase, Mordhau seems to be off to a flying start with plenty of players filling up servers in all modes. If you have any interest in a medieval-themed melee-focused multiplayer game, I can comfortably recommend Mordhau despite its current shortcomings.